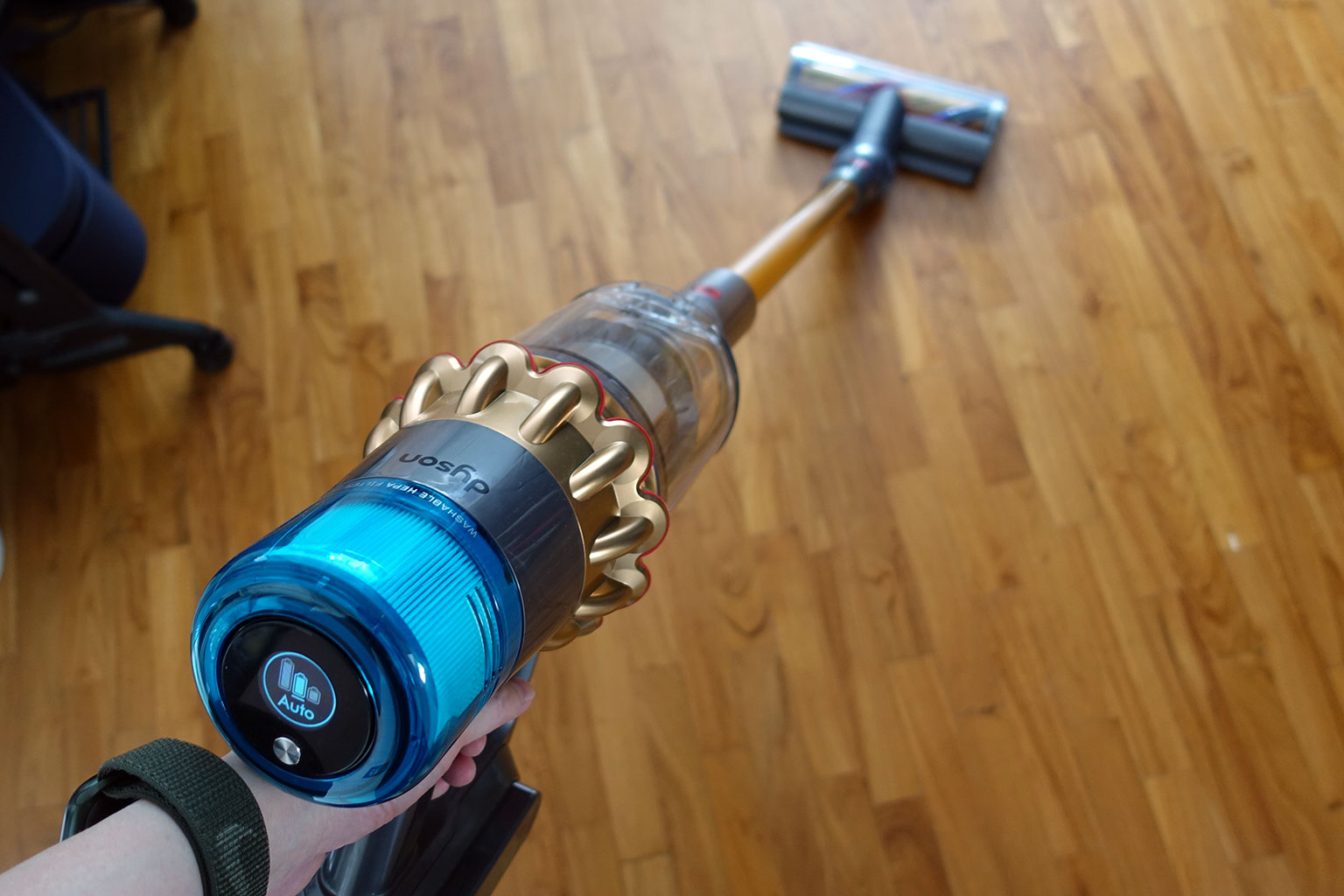 The cleanest sucker of them all?

It’s no secret that Dyson makes some of the best vacuum cleaners around, with impressive suction power and a range of high-tech features and functionalities – and making an important household chore quick and easy, and for some, even therapeutic.

Enter the Dyson V15 Detect Absolute (HEPA), the tech company’s latest and most powerful cordless vacuum cleaner yet. Now the V15 isn’t exactly new (though it was only made available recently in our Little Red Dot), but it is the first time Dyson is selling it along with the Laser Slim Fluffy cleaner head – which made its debut on last year’s V12 – and with HEPA filtration. 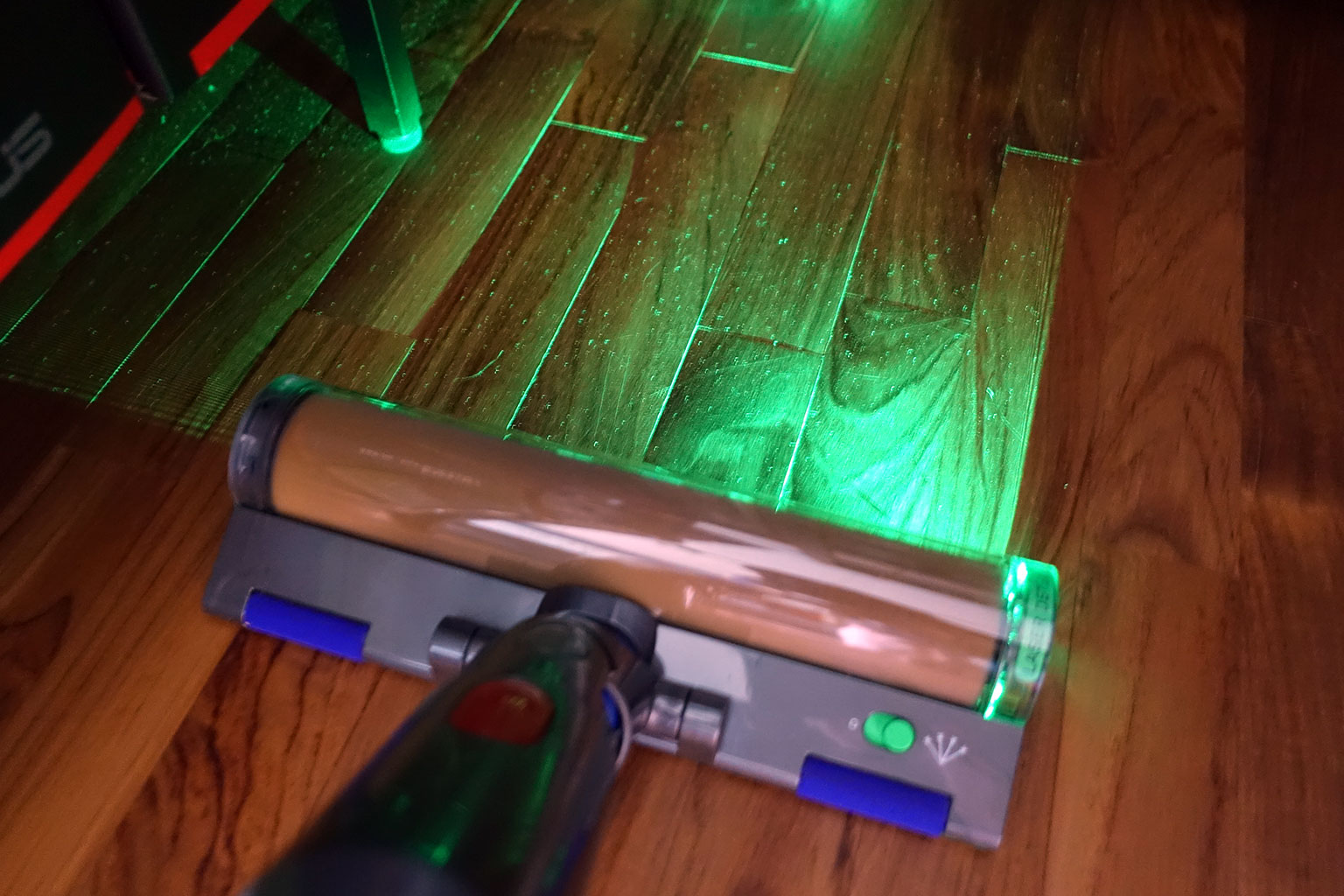 The Laser Slim Fluffy is a hard-floor cleaning head that includes a laser that highlights microscopic dust particles that would otherwise remain invisible to the naked eye. The V15 Detect Absolute can also count and identify the size of the dust particles it collects, displaying the information on its LCD screen, so you can see evidence that your vacuuming session is giving your floors a truly deep clean, which is very cool, I might add. 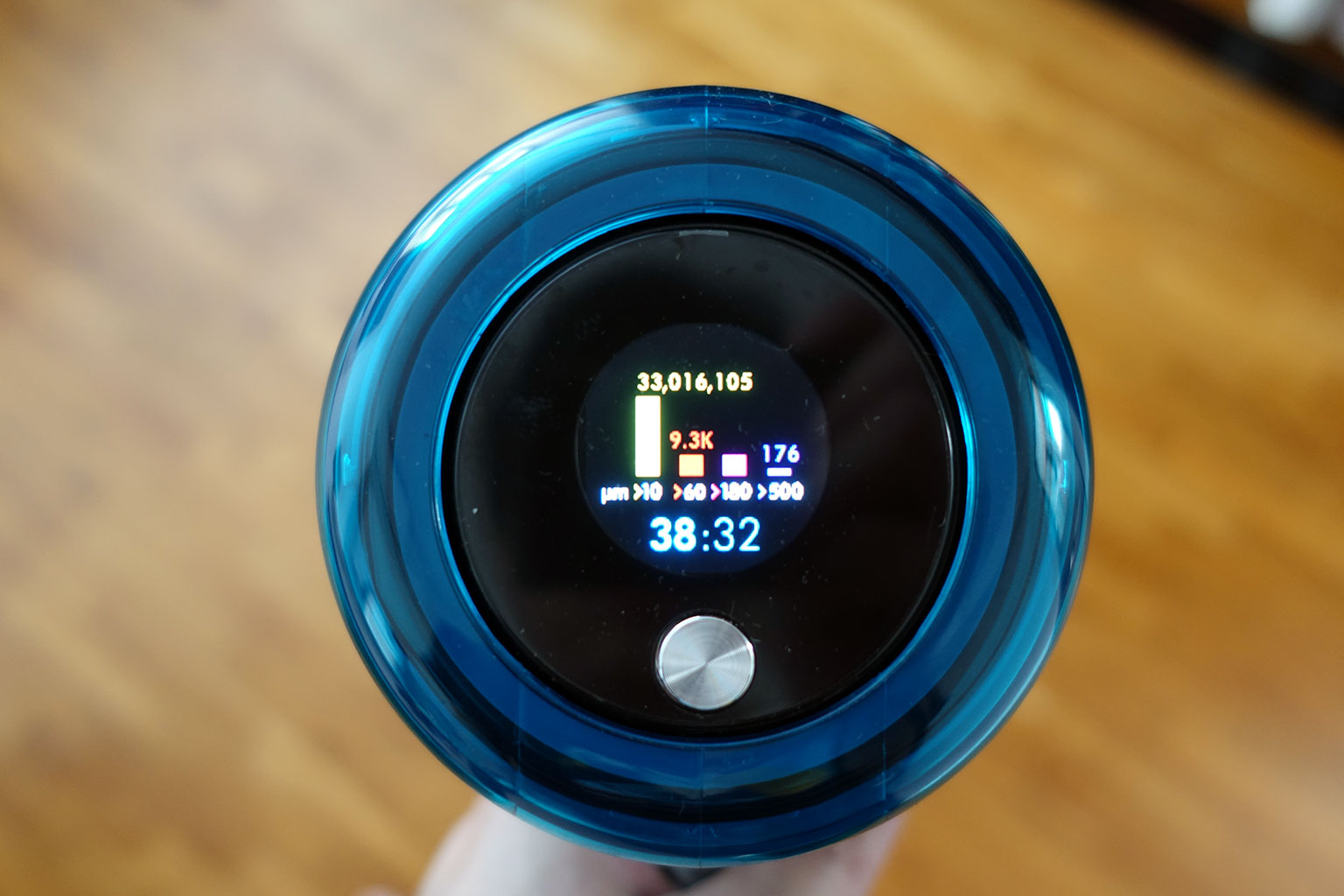 The same display also shows other important information, such as the remaining run-time and the power level selected. Sensors inside the V15 also determine if your floor requires a more powerful vacuum, ramping up the suction power if the machine detects a dirtier-than-usual area or to suit the type of floor it’s cleaning.

At the heart of the V15 Detect Absolute is a Dyson Hyperdymium motor, which the company claims generate up to 230 air watts of suction power, and a multi-stage HEPA filtration system that promises to capture 99.97% of dust particles down to 0.1 microns. It delivers more suction power (presumably to counter the stronger filtration system in place) – 80 air watts to be exact – than the V12 and certainly expels cleaner air than the latter in my experience with it. I actually don’t suffer from runny nose symptoms when using the V15 as compared to the V12. 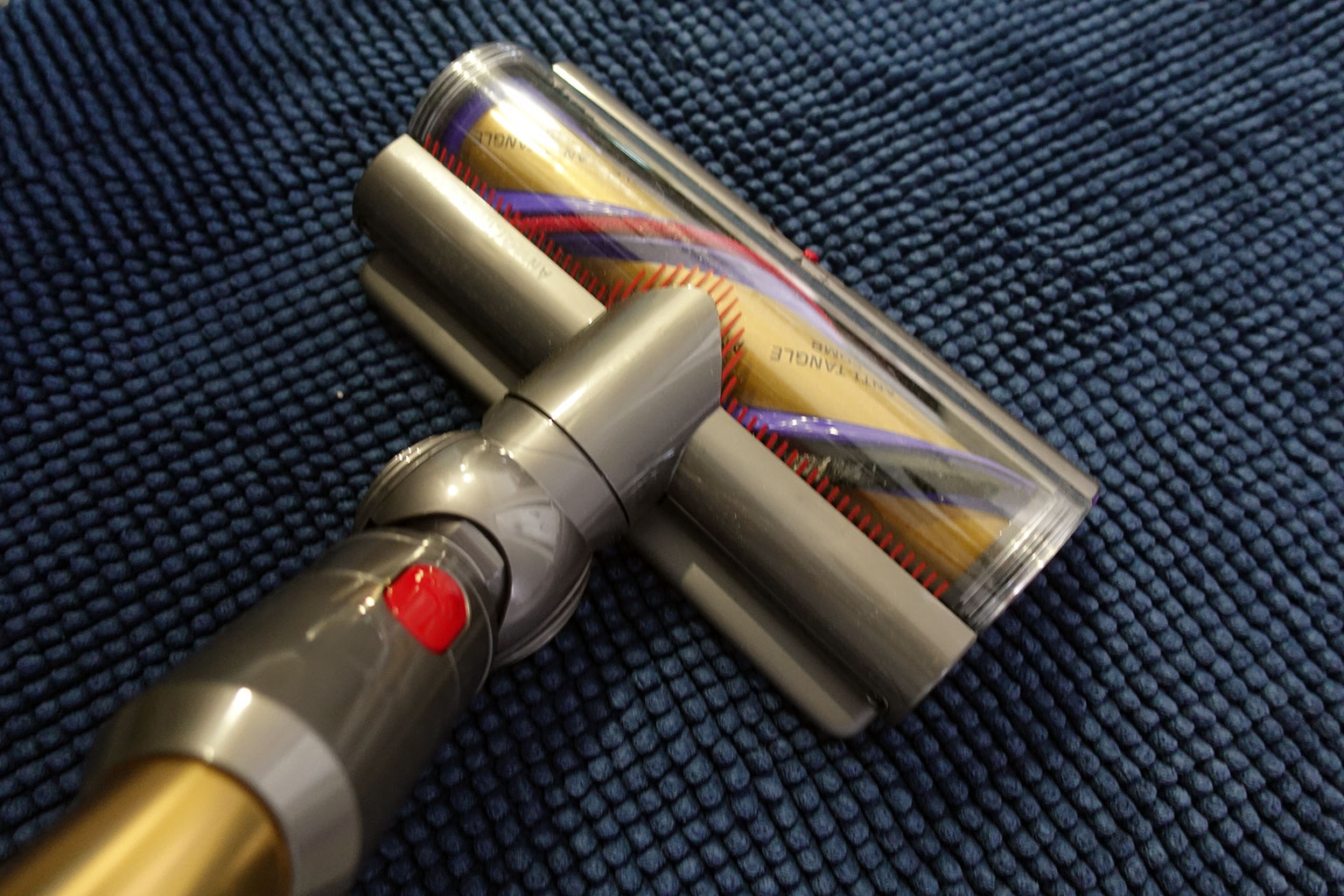 Besides the Laser Slim Fluffy, the V15 Detect Absolute also comes with the Digital Motorbar cleaner head. Unlike the former which should only be used on a hard floor, the Digital Motorbar works on all types of floors including carpets. Its built-in de-tangling comb also automatically clears hair from the brush bar, making maintenance easy and smoother cleaning of the head. It’s also strikingly heavy. As my house comes with marble and parquet floorings, I found the Laser Slim Fluffy to be the better head as the heftiness of the Motorbar makes the V15 Detect Absolute not only harder to manoeuvre, but also adds a lot more weight to its already heavy 2.61kg frame.

If you’re familiar with Dyson vacuum cleaners, then you shouldn’t be surprised that apart from the two primary heads, the V15 Detect Absolute also comes with a plethora of tools and accessories to help make your house more dust-free, easily. For instance, it comes with a built-in crevice tool that detaches in a click to reveal a ready-to-go crevice tool that’s stored inside for on-the-spot cleans. Then there’s also the Hair Screw tool, with its anti-tangle conical brush bar that allows it to pick up long hair and pet hair in small places (such as your couch). 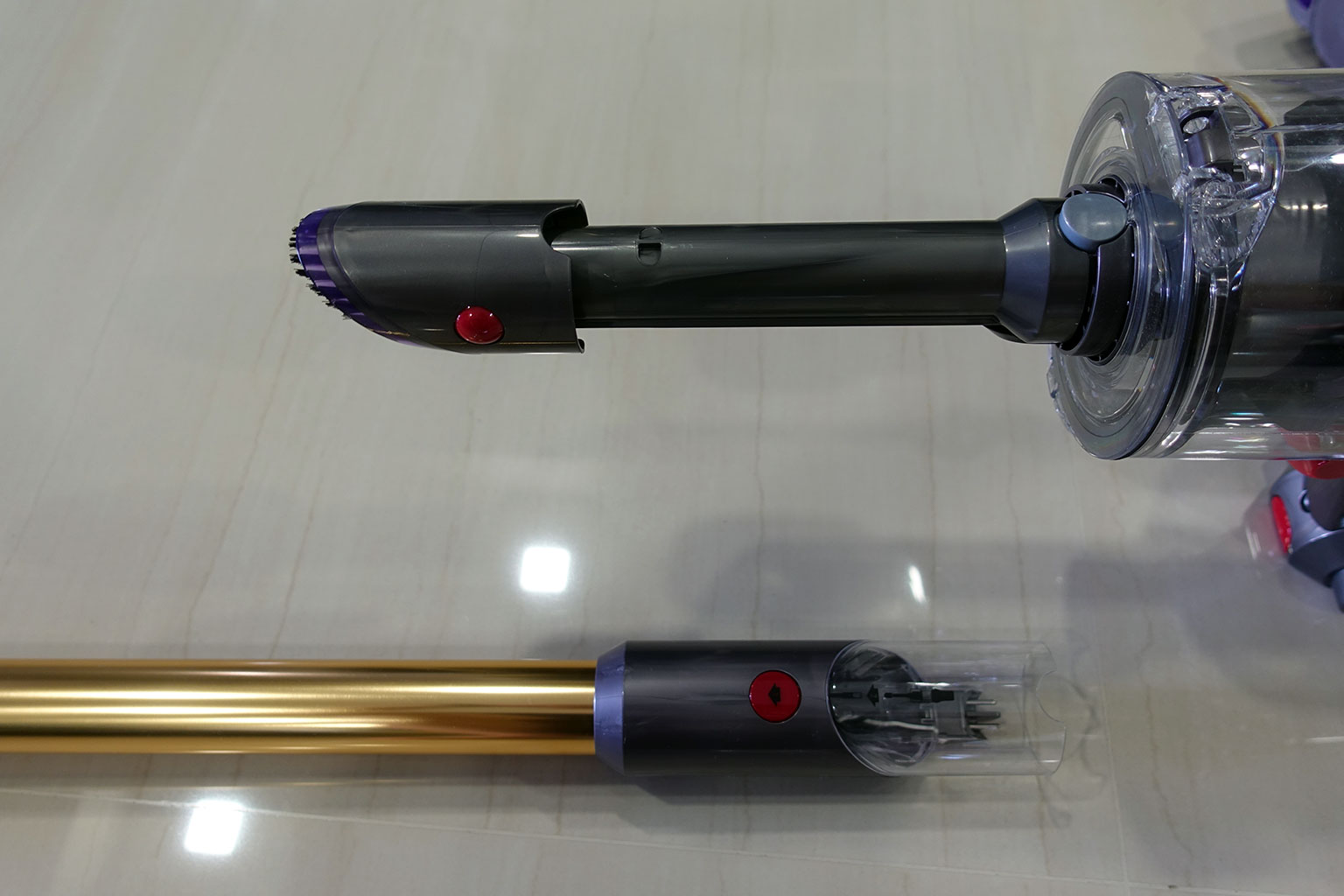 Of worthy mention are the new Detail cleaning and Pet grooming kits, which Dyson sent along with my V15 Detect Absolute review unit. These kits aren’t exclusive for use with the V15, of course, and are also compatible with the recent V12 down to the V8. These are also specialist tools, and so while not necessarily for everyone, are there to help owners get the most out of their Dyson machines. The Detail cleaning comes with a scratch-free dusting brush that Dyson claims, unlike conventional dusting brushes, protects against marks and scratches. It’s also great for cleaning the recesses between the keys of your keyboard. The kit also comes with an extension hose and an Awkward gap tool that, as you might have guessed, allows you to reach tight gaps and hard-to-reach places.

Then there’s the Pet grooming kit: A grooming brush that doesn't require you to remove your dog’s fur from the brush with your hands. It’s “self-cleaning” in a way that the bristles can be retracted, and the Dyson vacuum cleaner will suck the tangled fur into its bin. In practice, I found grooming my dog this way more cumbersome, as I had to keep turning the machine on and off each time the bristles are filled with fur. It’s also really more suitable for owners of medium-to-long-haired dogs. Calling it a Pet grooming kit might be a tad too general – I can’t imagine this kit being used on cats or other smaller pets like rabbits.

Should you buy the new V15?

At S$1,349, the Dyson V15 Detect Absolute (HEPA) is the tech company’s most expensive vacuum cleaner for the Singapore market yet. But it is also the most powerful and versatile one too – thanks to its incredible range of tools and accessories. That’s not to say it doesn’t have its quirks. 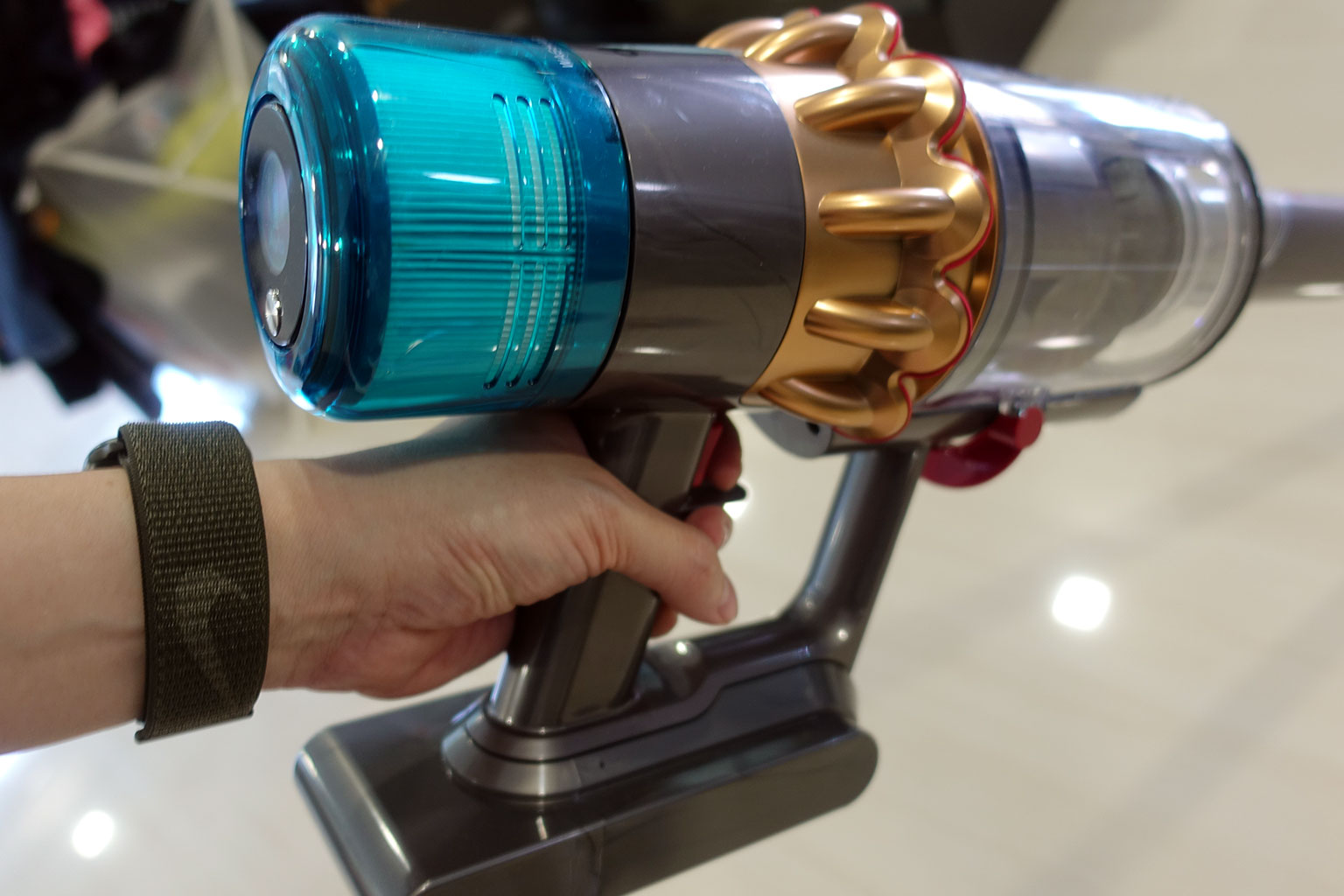 For one, the V15 still uses a trigger, which means you need to hold it down to use the vacuum. I found that holding the V15 at a certain angle while pressing the trigger, could lead to discomfort for some users with small hands – like my petite 150cm-tall spouse, who developed ‘rug burn’ around the knuckles of her thumb. The weight of the machine resting on her hand also compounded the issue for her.

To be fair, the Dyson V15 did not cause me any issues. But as I count the V12 Detect Slim as a personal favourite, I immediately missed the on/off button on that vacuum cleaner when testing the V15 Detect Absolute. It’s a matter of personal taste, but still worth considering if you’re deciding between the V15 or V12. What I really do like about the V15 Detect Absolute (HEPA) though, is already hinted in its name – the HEPA filtration.

The HEPA filtration works wonders for my dust-sensitive nose. It is the only vacuum cleaner by far, that does not cause my nose to turn into a waterfall of sticky gooey stuff. Even using the V12 requires me to mask up. I’m not saying the HEPA filtration on this Dyson V15 Detect Absolute (HEPA) will make a difference for everyone, but it certainly did for me. And that’s more than good enough for me to switch over to it.

Interested in getting the Dyson V15 Detect Absolute (HEPA) for yourself too? You can find them at the Dyson online store, the Dyson Flagship Store on Lazada, the Dyson store on Shopee Mall, and at Dyson Demo Stores around the island.

Write a Review
Compare This | Specifications
Strong and powerful suction
Plentiful of tools and accessories
HEPA filtration
Long-lasting battery life
Could have done away with the trigger
Weight might not be appealing - get V12 if this is important to you
The HEPA version of the V15 is only available at Dyson's online store
Our articles may contain affiliate links. If you buy through these links, we may earn a small commission.
Sponsored Links