If you think about it, despite their futuristic industrial design and high tech motors, Dyson’s cordless vacuum cleaners actually still used pretty old school tech for certain functions, like little LEDs to tell you the remaining charge or that the filter is fitted incorrectly.

On the V11, Dyson has finally moved away from the simple diodes and put a small, circular LCD screen at the end of the unit. Like the DLS system, this move has drastically reduced the need for me to second-guess the vacuum when I’m actively using it.

For one, the display is able to show a countdown timer. Regardless of the speed mode you’re in, you’ll know exactly how much time you’ve left before the battery fully depletes. Change to a different speed and the timer will recalculate and present a new reading automatically. In short: I no longer need to calculate in my head what one bar means in terms of minutes.

You will also see the currently selected mode on this screen. When you aren’t using the High Torque cleaner head, the Auto mode will be replaced by a Medium mode.

The LCD can also show maintenance alerts, so you’ll know when it’s time to clean the filters or what to do when there’s a blockage. And here’s another thoughtful touch: instead of tiny text on a tiny screen, you get an animation explaining what you need to do to resolve the issue. 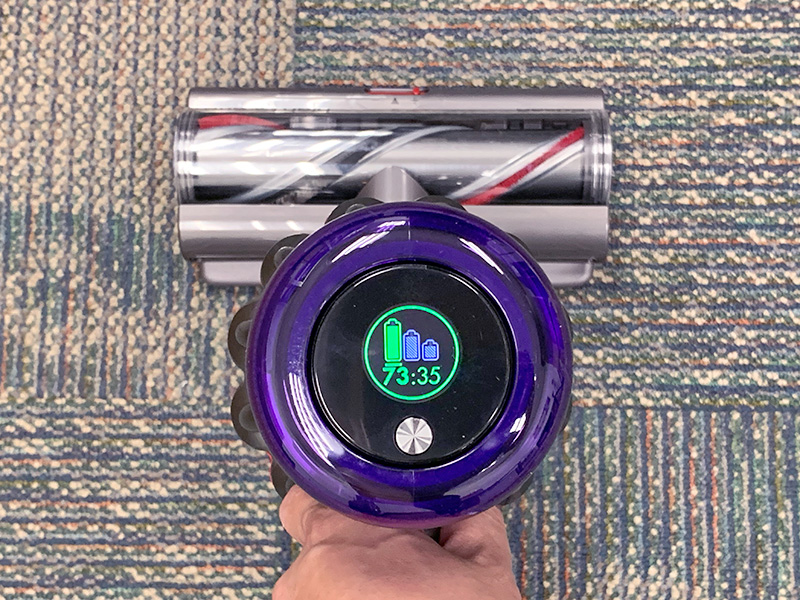 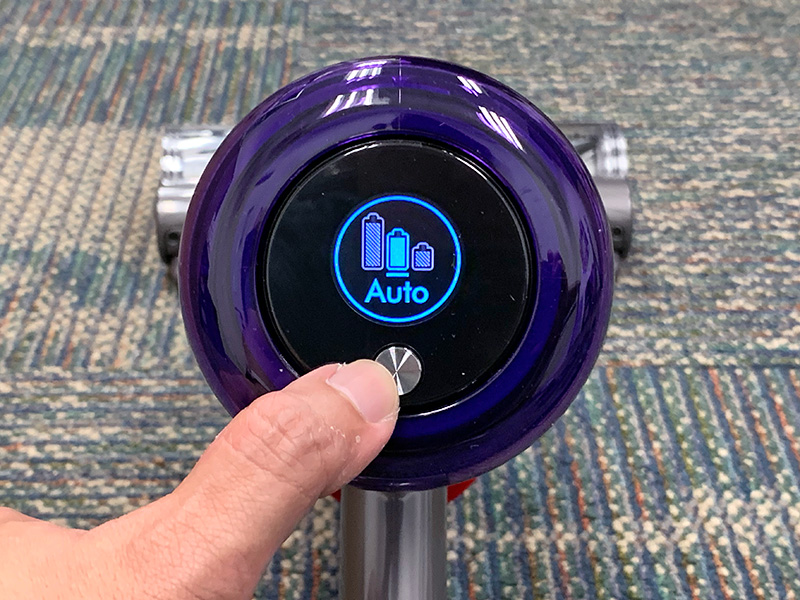 If the V10 is to be remembered for its hardware breakthroughs, then the V11 will be known for its user experience refinements. I’m still undecided on which feature — the adaptive suction system or the LCD — is my favorite, but I can tell you that both are sensible additions that have taken a bit of the chore out of vacuuming. 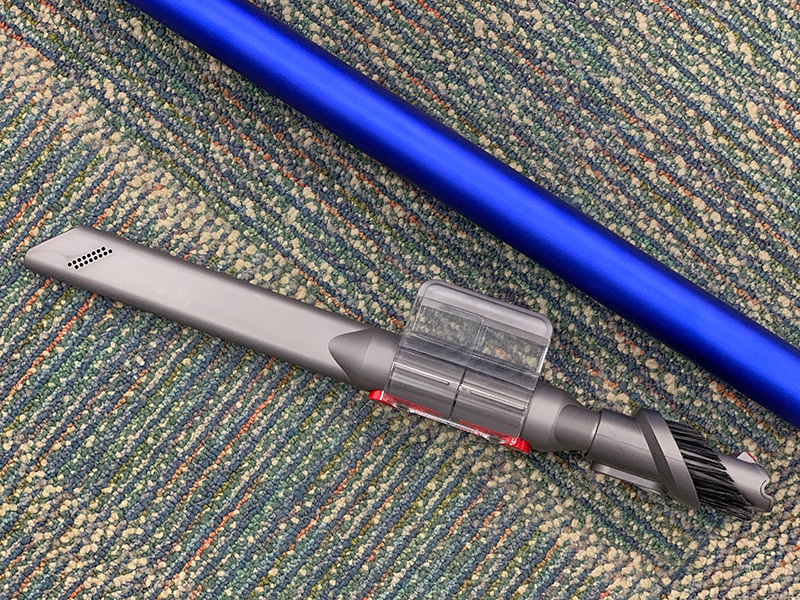 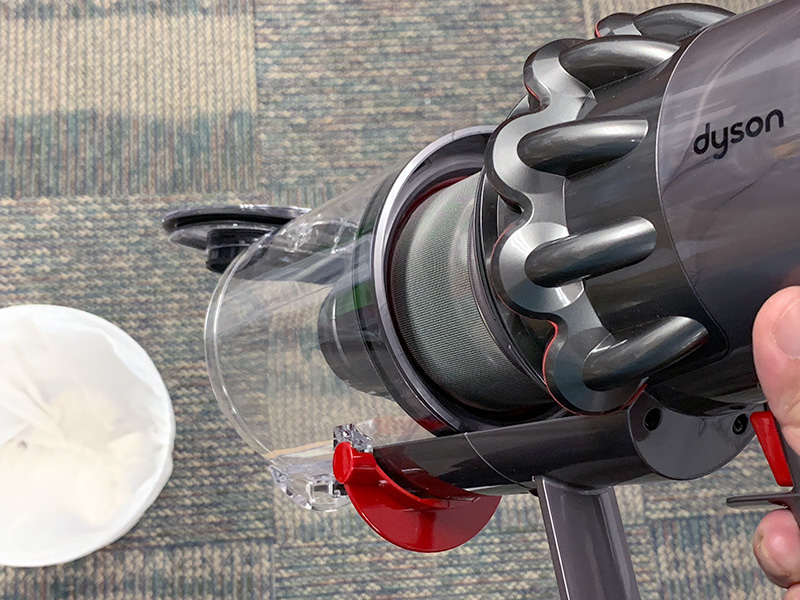 Power-wise, frankly speaking, I didn’t find the V11 Absolute (that’s the model I’ve been testing the past week) to be that much different from the V10. I tested with cereal and rice on a high pile carpet and the V11 had no problem swallowing them on the highest speed setting — but so did last year’s V10. Dyson did say it’s using a new triple diffuser and an improved impeller for the V11’s digital motor as well as a more powerful battery; so despite it still spinning at up to 125,000 rpm, the V11 touts 20% more suction power (max 185 air watts) than the V10.

Battery life on the V11 is good — especially if you’re a spot cleaner like me who doesn’t hold the trigger down all the time and typically alternates between the Auto and Eco modes. With this usage pattern, I was able to clean my three-room apartment in 20 minutes and the LCD still told me I could go on for another 50 minutes.

Just for fun, I once kept my finger on the trigger in Boost mode, and the battery threw in the towel shortly after 7 minutes. That’s about the same as what I've gotten with the V10, though remember, the V11 sucks harder. The V11 also takes longer to charge than the V10: 4.5 hours vs. 3.5 hours.

Finally, it’d be remiss of me if I didn’t point out that the V11 Absolute weighs 2.9kg, which is heavier than the V10 Absolute's 2.6kg. I could only feel the strain after a cleaning session, but my wife noticed it the moment she picked up the V11.

If you’re currently using a V10, there’s no pressing need to upgrade to the V11. The V11 has mostly the same design as the V10, and its motor, while more powerful, isn’t as immediately obvious as, say, if you’re coming from a V8 or V6. 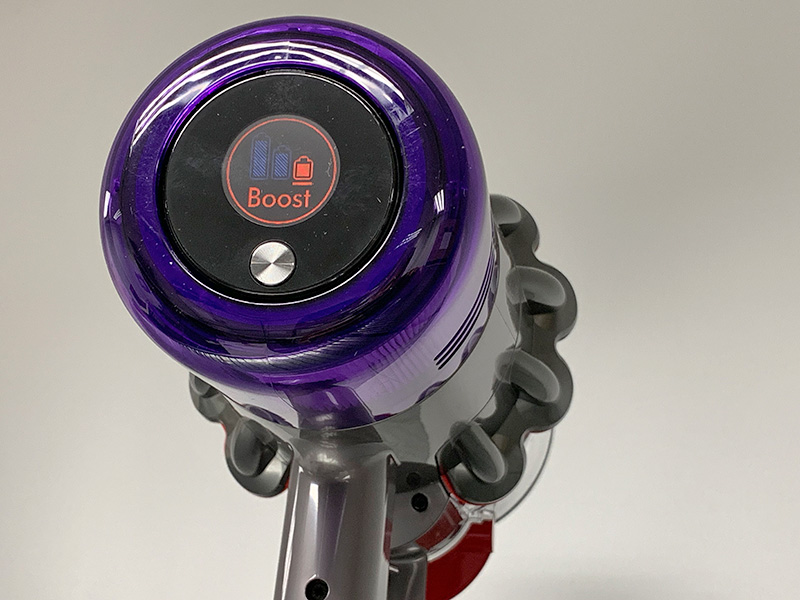 If you’re coming from a V8 or below model or are shopping for your first cord-free vacuum cleaner, then yes, the Dyson V11 is quite a beast and is now the most powerful dust and debris sucker I’ve ever laid my hands on. I won’t go as far as to call V11's Dynamic Load Sensor system and LCD as must-haves, but I also won’t deny that they’re meaningful improvements that have since made my vacuuming experience that wee bit more fun and less stressful. If there’s anything that I dread more than vacuuming the house, it’s vacuuming the house with a lousy vacuum.

The Dyson V11 Absolute is priced at S$999 and is available on Dyson's online store and in major departmental and electrical stores. The V11 Animal isn't available here at the moment. 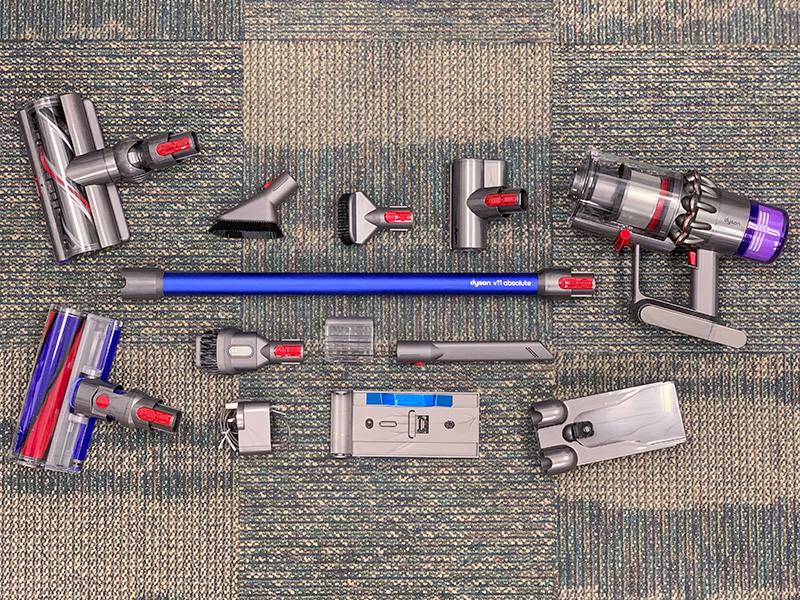 Read 7 User Reviews
★ ★ ★ ★ ★
Write a Review
Compare This | Specifications
Powerful suction
Countdown timer is useful
Good battery life
Expensive
Heavier than V10
Our articles may contain affiliate links. If you buy through these links, we may earn a small commission.
Sponsored Links