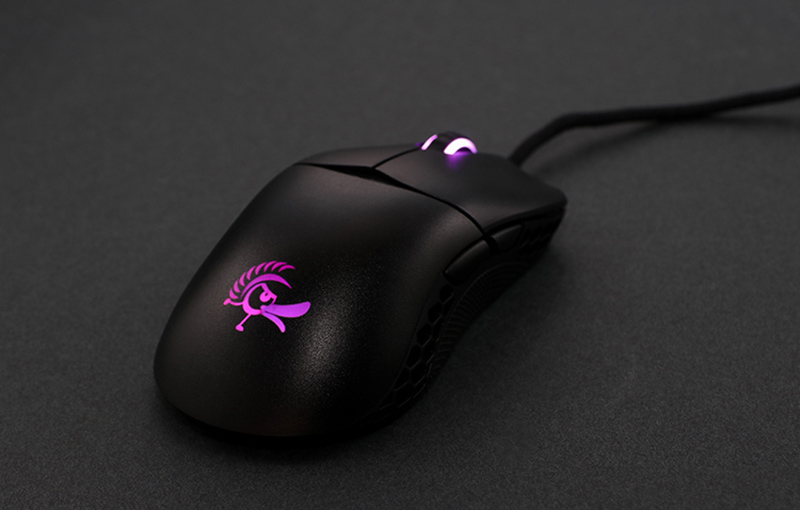 Checking all the right boxes

Ducky is better known for its gaming keyboards, and the saturated gaming mouse market isn't exactly screaming for another player in the scene. That said, the company has forged ahead with its own ultralight mouse, and the Ducky Feather is showing itself to be one of the top gaming mice available today. It's not the flashiest or even the most revolutionary, but it doesn't need to be. Ducky has doubled down on getting the fundamentals right, and the result is a mouse that delivers much of what gamers want. The Feather may not be Ducky's first mouse, but it is the first one worth mentioning.

It weighs just 65g, and it achieves that weight with the use of minimal perforations. Most of the mouse's shell is solid, and the only holes are on the sides, in front of the side buttons. You'll almost never find yourself touching this part of the mouse, which is a plus for comfort for those who dislike the recent slate of honeycomb shells. At 124mm long, this is a medium-sized mouse with a very flat shape that's reminiscent of the Zowie FK series. It's a safe, versatile shape that will accommodate itself to most grip styles, but the lack of a prominent hump may mean that palm grippers will find it doesn't fill their hand in a way that they're used to. The side grips are heavily textured rubber, featuring a grid of raised bumps for additional purchase. The mouse is too large for me to fingertip grip it while still having room to pull it down, but I was able to claw and palm it quite comfortably.

This is a true ambidextrous mouse too, with side buttons on both the left and right sides. The mouse is set to right-handed mode by default however, and the buttons on the right are disabled. Build quality is excellent, with no noticeable flex when pushing down on the sides. The matte plastic surface can feel a little slippery though, so it'd have been nice if Ducky included some grip tape as well since many manufacturers have taken to doing. The default mouse feet are four small oval-shaped PTFE feet that go into each corner. The Feather glides smoothly right out of the box, with no scratchiness at all. And if you prefer larger feet, Ducky has included those as well – they fit perfectly into the cutouts at the bottom of the mouse.

The choice between small and large feet is a personal one, but I think large feet are better if you use a softer, squishier pad like the regular Glorious pads. They help provide a more consistent glide, especially if you tend to push down hard on your mouse. 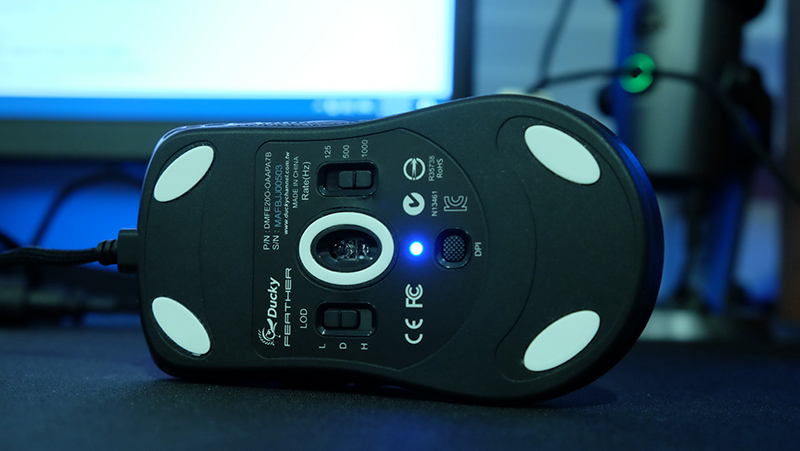 Ducky differentiates itself from the competition with its choice of mouse switches. These are Huano Blue switches, rated for 50 million clicks. These require more force to actuate than Omrons and are deliciously tactile. They click satisfyingly, and there is little post-travel. Side-to-side button wobble is minimal as well, and you won't really notice it when using the mouse. The side buttons have crisp clicks, but buttons 4 and 5 feel slightly inconsistent, with there being more post-travel on the latter.

The scroll wheel could be better as well. I'd have preferred more tactile notches, but there is at least no side-to-side movement or squeaking noises.

Another unique feature that shows off Ducky's attention to detail is the mouse's cable. This is a flexible and supple paracord-style cable that exits the front at a raised angle of 7.91°. This is similar to what we've seen on the Zowie S series and the new Zygen NP-01. This lifts the cable up and away from the mouse, which helps further minimise cable drag and transitions even more naturally to a mouse bungee. The Feather is at the moment still a driverless mouse, and all the customisations are done through presses of the physical buttons. This includes everything from switching to left-handed mode to tweaking the onboard RGB lighting, which lets you choose between a range of preset effects or a dedicated customisation mode. You'll want to pay close attention to the user manual, because it can seem a little unwieldy at first. The side button on the opposite side also support something called Function Mode, which lets you hold down the 7th button and use buttons 4 and 5 as End and Home keys respectively.

Finally, Ducky has installed a PixArt PMW3389 optical sensor on the Feather, which tracks up to 16,000DPI. This is a well-known flawless sensor, with no jitter, acceleration or angle snapping. It didn't let me down in my time with it, and what's interesting is Ducky says there's some sort of PET plastic cover over the sensor, which is presumably there to protect it from dust. You can adjust the DPI, polling rate, and lift-off distance via buttons and switches at the bottom of the mouse, which is intuitive enough. However, seven DPI stages are supported at the moment, so you'll again want to refer to the manual to check what colour corresponds to the DPI you want. The Ducky Feather is as solid as gaming mice come. Its comfortable, versatile shape pairs nicely with a lightweight, nearly hole-free chassis, and the Feather feels very nimble in hand. It is suitable for most grip styles, although you'll like it better if you have medium to large hands. I'd be hard-pressed to find flaws with the mouse and it delivers in the areas that matter most, such as the feel of the left- and right-click buttons, a flexible cable, and a flawless sensor. At S$89 on Lazada, it's rather affordable as well.

My one gripe would be how the lack of software and RGB lighting currently make for an awkward pairing, and it's not the easiest to customise the lighting using the hardware buttons alone. But that aside, the Feather is a really well-rounded mouse – if you're looking for a lighter Zowie FK2, this might do it, especially if you don't like the holes on the Glorious Model O.

Write a Review
Compare This | Specifications
Safe, versatile shape and true ambidextrous design
Lightweight design with a mostly solid shell
Tactile Huano buttons and flexible paracord cable
Lack of software makes RGB lighting customisation difficult
Feel of side buttons can be inconsistent
Scroll wheel could be more tactile
Our articles may contain affiliate links. If you buy through these links, we may earn a small commission.
Sponsored Links