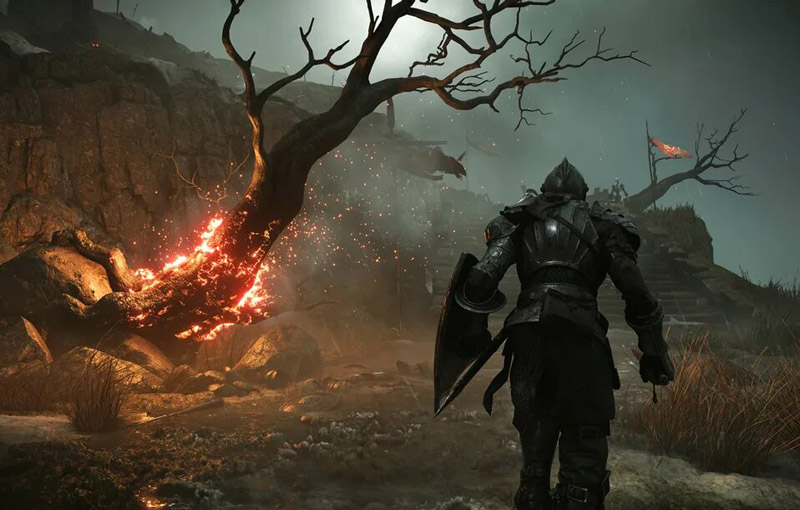 “Soul of the lost, withdrawn from its vessel.”

FromSoftware’s Souls franchise took off after the debut of Dark Souls, thanks to its brutally challenging gameplay and set piece boss fights that hit mainstream players like a sledgehammer. Dark Souls wasn’t the first installment of this franchise, however. No, everything began with a little game called Demon’s Souls on the PlayStation 3. A cult classic that eventually fought its way into the hearts of masochists everywhere.

Now, developer Bluepoint Games have given the 2009 title a jaw-droppingly gorgeous makeover, the same as they had previously done for Shadow of the Colossus on the PlayStation 4. Demon’s Souls is a PlayStation 5 launch exclusive, and while its high difficulty might turn players away, it serves as the best technical showpiece for the console’s capabilities that currently exists. Some aspects of the game, such as its level design and build variety, have aged superbly well. Others…? Not so much.

You have died (however, the Nexus traps you) 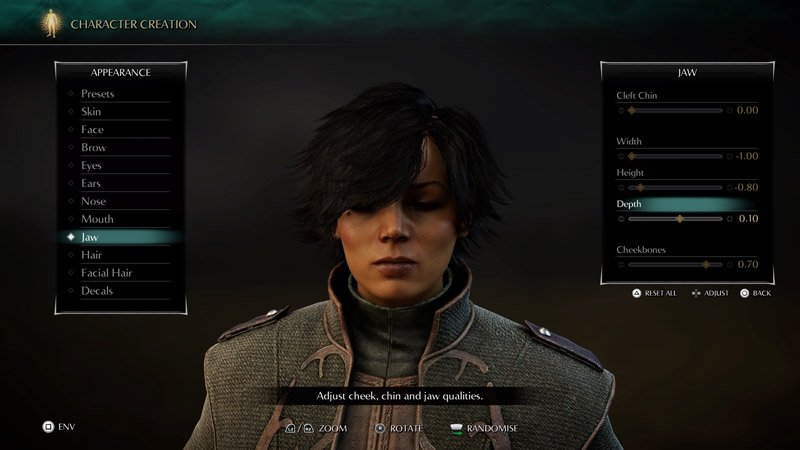 I came into Demon’s Souls from a strange angle. My first real foray into the Souls franchise was with Sekiro: Shadows Die Twice a couple months ago, which is a game I have yet to complete but am thoroughly loving. In the middle of my playthrough, I received this game to review - and going all the way back to the first Souls game right after Sekiro felt like I was flipping through FromSoftware’s old baby pictures. “Aww… this is before you really figured it all out, huh? Cute!”

I’ll get back to why it feels that way in a bit. Demon’s Souls places players in the grim, medieval world of Boletaria. This once-great fantastical kingdom has been chewed up and spat back out by the Old One, a malicious entity released by (the very dumb) King Allant. The Old One has brought with it an endless army of demons that have engulfed Boletaria and it’s up to you, a restless seeker of adventure, to slay King Allant and return the Old One to its slumber.

Don’t expect the narrative of Demon’s Souls to do anything for you - at least, not at first. It’s largely forgotten about for tens of hours at a time as you traverse worlds and slay demons. Instead, the game relies on a heavy atmosphere to keep you engaged, laying it on so thick that it often borders on oppressive. Bluepoint Games have done incredible work in bringing Boletaria to life, etching beautiful layers of detail into these winding environments and their crumbling monuments. While I understand that some visual changes for certain enemies have irked old fans, I found myself constantly blown away by their work. 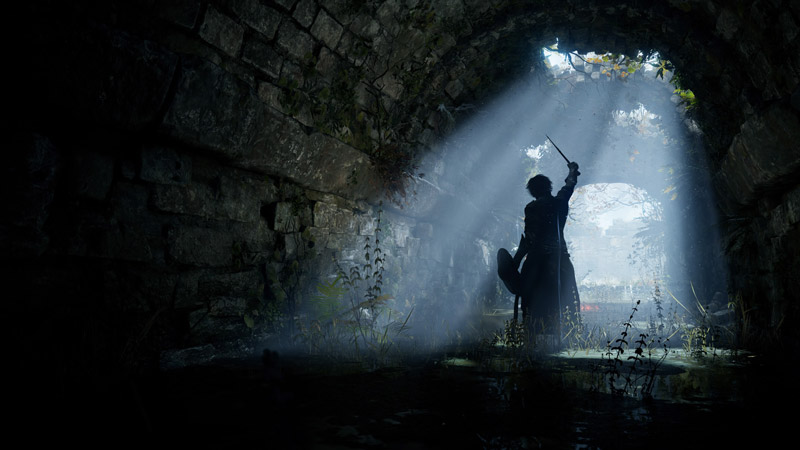 The particle effects on bosses like the Flamelurker and the little animations on enemies and their attacks (such as the Mind Flayers’ writhing tentacles) make this one of the best-looking games I have ever played. The lighting is also gorgeous, especially in areas like the Boletarian Palace where cracks in the ceiling illuminate otherwise dingy-looking corridors - and the enemies residing within them. Bluepoint has provided two visual options: a 4K/30fps Cinematic Mode and a 1440p (upscaled to 4K)/60fps Performance Mode. I vastly preferred Performance Mode, as it is very, very hard to go back from playing a Souls game at a buttery smooth 60fps, but your mileage may vary. In both modes, the game looks incredible.

The sound design deserves equal praise. Weapons sound fantastic, with in-game audio adding a satisfyingly meaty level of impact to each hit. Backstabs for example, sound like a grotesque blend of crunching bones and parting flesh. Magic users like me will cast the Soul Arrow spell a thousand times before the game is over and never get tired of it, because of how damn good it sounds and feels. The DualSense controller is well integrated into gameplay as well, with immersive rumbles and haptic feedback that feel accurate to whatever’s happening on screen. Brutal executions, massive area-of-effect spells and melee attacks all have so much weight due to the perfect combination of audio design and (literal) game feel.

The controller’s rumblings can feel a little out of place when you walk into a wooden crate and it acts like a gas canister just exploded, but that’s just dumb destruction physics for you.

You have a heart of gold, don’t let them take it from you 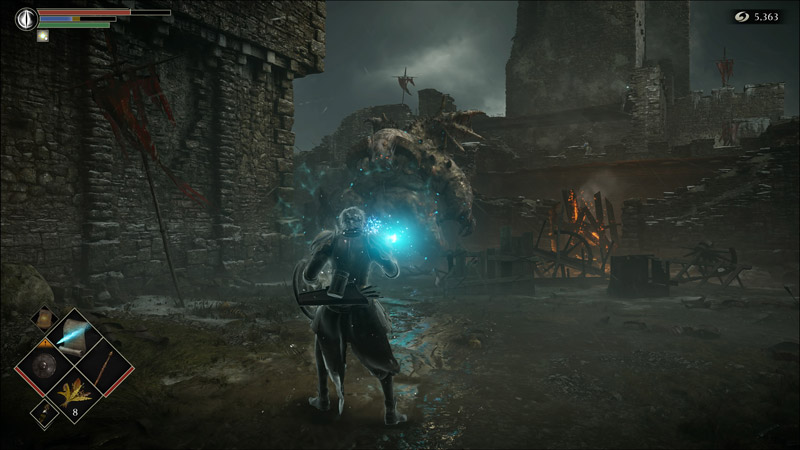 When we’re talking about Demon’s Souls’ moment-to-moment gameplay, things can get a little bit complicated. You see, while Bluepoint Games put an impressive amount of work into updating how the game looks and sounds, they mostly left its gameplay intact. This means that underneath this game’s very pretty skin lie the crusty bones of a 12-year-old videogame. And you can feel that.

We’ll talk about the good bits first. After probably spending an egregious amount of time in the game’s character creator (which is wonderfully extensive), you get the option of selecting different classes to start playing as. This introduces you to one of the game’s most fundamental rules: pick a role, and stick with it. You gather ‘souls’ from killing demons, and can trade those souls to level up in the game’s hub world, the Nexus. When you level up, you get the option of upgrading a single character stat, ranging from ‘Strength’ to ‘Magic’.

It’s important that you don’t try to equally distribute your levels across all these stats, because in this game especially, being a jack of all trades makes you a master of none. Instead, you really have to figure what kind of combat you prefer to engage in - close quarters with a massive sword, or far-off with ranged spells. Levelling up gets exponentially more expensive the more you do it, but if you strategise in advance, you can really maximise your strength in a specific role. Building a character up from scratch like this feels incredibly satisfying, especially when you start to one-shot enemies that gave you lots of trouble just a while ago.

Write a Review
Compare This | Specifications
Visually breathtaking
Fantastic audio design
Lots of build variety
Tons of environmental and enemy variety
Enemies and bosses are very dumb
Lock-on camera can be frustrating
World Tendency is weirdly obtuse
Deaths can feel rather cheap
Our articles may contain affiliate links. If you buy through these links, we may earn a small commission.
Sponsored Links