Earlier on, we've compared the aesthetics and features of our review unit against Apple's S$2,788 MacBook Pro with Retina Display. While it's armed with an Intel Core i7 quad-core processor, it's slower than the processor in Dell XPS 15, only features Intel Iris Pro integrated graphics engine, 8GB of RAM and 256GB of SSD storage. However, performance-wise, we're matching the XPS 15 against a more expensive S$3,588 MacBook Pro powered by a 2.3GHz Intel Core i7 quad-core processor, as it's a better fit for comparison in terms of performance proficiency. The higher-end model also includes an NVIDIA GeForce GT 750M and 16GB of RAM that will give it on almost equal standing with the Dell machine. Note that we had to run the Mac machine with Boot Camp to load Windows 7 so as to compare it against other Windows based machines. Naturally, it won't run as optimally as its native Mac OS, but for the purpose of this review, it will suffice.

Besides Apple, we're also including two more notebooks for comparisons - the Lenovo IdeaPad Y510p that's equipped with a pair of NVIDIA GeForce GT 750M graphics units and the slightly older Toshiba Satellite P50 multimedia notebook, which utilizes the NVIDIA GeForce GT 745M GPU. Both of these are 15-inch multimedia notebooks just like the Dell unit.

PCMark 8 is a synthetic benchmark that simulates everyday usage comprising of workloads testing web browsing, multimedia editing and document editing. The "Home" benchmark has a general array of tasks, while the "Creative" and "Work" benchmarks are more specific, and test a system’s performance at specific workloads.

The XPS 15 didn't do as well as the MacBook Pro across all tasks, but still fared significantly better than the IdeaPad Y510p for the "Storage", and both "Apps" test segment, proving that its 32GB of mSATA cache is assisting the notebook's basic HDD. It also surpassed the Satellite P50 for the "Home" and "Storage" category, but the latter clocked in higher scores than the XPS 15 in the "Creativity" and "Home" sections. 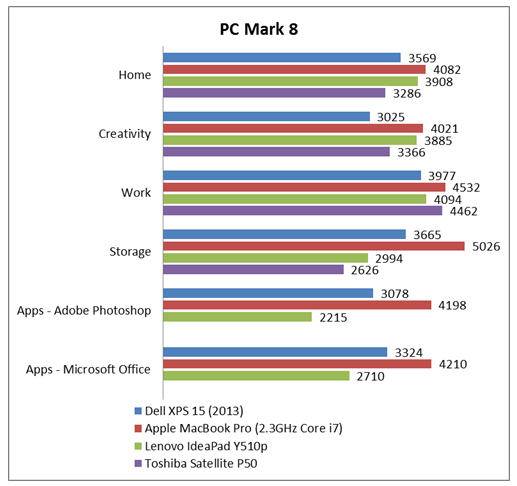 3DMark 2013 is a synthetic benchmark designed to test a notebook's graphics and gaming capabilities. For a more in-depth understanding of 3DMark 2013, please refer to our article "3DMark (2013) - Notebook GPU Performance Review". We'll be running our notebooks through two benchmarks:

The XPS 15's GT 750M graphics proved superior to the Satellite P50's GT 745M GPU. However, the MacBook Pro edged pass the XPS 15 with similar hardware configuration. Expectedly, the IdeaPad Y510p came out tops when it came to graphics and gaming abilities as it's driven by dual GeForce GT 750M GPUs. Oddly though, it didn't quite eek out as much performance as one would expect given that there are two GPUs.

Thanks to its dual GTX 750M graphics, the IdeaPad Y510p easily overpowered the other two notebooks on Crysis 2, running a 25% speedier on the "Very High" setting, and a 56% quicker on the "Ultra" setting, when compared with the next fastest notebook, the XPS 15. From the results, we can tell that IdeaPad Y510p's NVIDIA SLI drivers are well optimized for Crysis 2.

However, despite its remarkable performance on Crysis 2, the IdeaPad Y510p scored the lowest on Tomb Raider. As was originally reported when we first reviewed the notebook, it seems that only a single GPU is working with the benchmark. Surprisingly, as both the XPS 15 and the MacBook Pro are equipped with a single GT 750M GPU, even these machines recorded faster performance than the Lenovo unit. Since Tomb Raider is newer than Crysis 2, we deduce that SLI performance can be pretty inconsistent and is extremely reliant on driver optimizations. 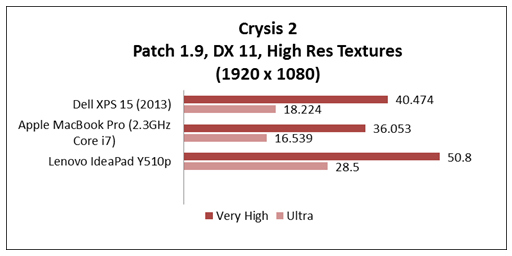 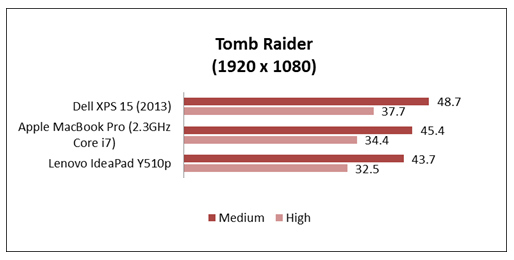 To test battery life, we use Powermark, a synthetic benchmark which tests a device's battery life with a number of productivity and everyday usage scenarios.

The XPS 15 includes a 61WHr battery, which is really meager for its size and specifications, but looking across other multimedia notebooks, it seems that this is a common trait (or issue). As such, it didn't really last a lot more than two hours. While it looks weak when compared to the MacBook Pro's 3.5-hour batter up-time, note that it packs the highest battery capacity among the compared notebooks. It is also the most well optimized of any notebook since Apple only has a few product SKUs to manage. It would have been interesting to see how the US model of the Dell XPS 15 would have competed with its higher capacity battery pack, but alas it's not an option in this region and the battery is not removable.

The IdeaPad Y510p exhausted the most power, while the Satellite P50 was the least energy consuming. Because the XPS 15 had similar hardware to the MacBook Pro, both ended up with the same power efficiency. From this, you could tell that if the Dell machine had an equivalent sized battery pack as the Apple MacBook Pro, it might have probably lasted almost as long.

Our Portability score factors in battery life, weight and volume to give you an idea of how easy it is to carry each device around. Because of its limited battery life, the Dell XPS 15 wasn't able to outscore the Apple machine despite its lighter build. Still, we've to mention that Dell has made a lot of progress for a multimedia machine to have such a high portability ratio as compared to older notebooks of its class such such as the IdeaPad Y510p and Satellite P50, which it leapfrogged them handsomely. 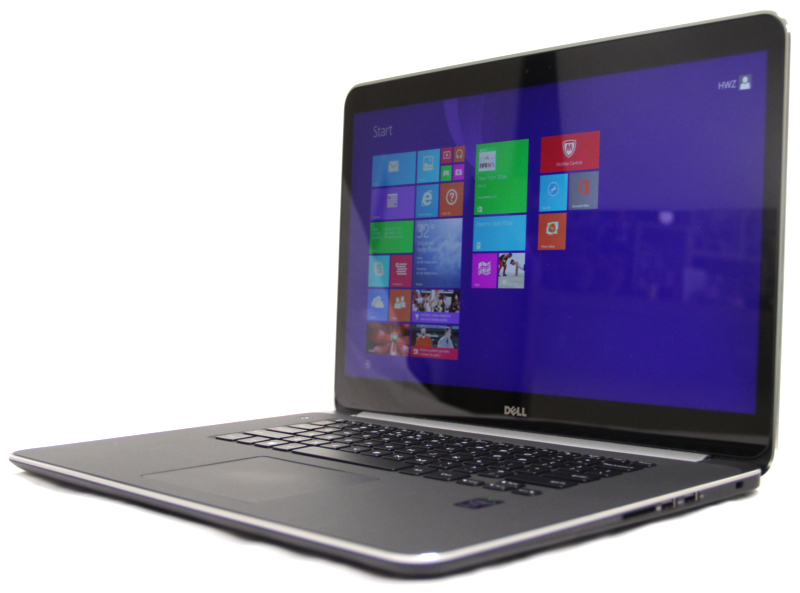 We admired the immense clarity of visuals and text the Dell XPS 15 presented, thanks to its stunning 3,200 x 1,800-pixel resolution panel. We're sure designers, engineers, and photo-editing professionals will appreciate the display packing all that many pixels into a 15.6-inch form factor, enabling a much larger work area than most other notebooks in its class.

We also adored its overall fashionable body, specifically its chassis clad in machined aluminum and its carbon fiber composite base, along with the ideal positioning of its speakers. In spite of weighing a mere 2.01kg, we admit that the notebook was remarkably sturdy. Dell also incorporated minute details we were grateful for, mainly NFC connectivity, dual-array digital microphones, as well as the battery life indicator.

However, we felt somewhat shortchanged that the system didn't come with a solid state drive. With SSD prices dipping, you tend to expect to have it on a machine that costs S$2,699. While we do value its 1TB storage space, it would have been ideal if it had both a HDD and SSD to leverage the best out of both storage drives. Ultimately, the well specced XPS 15 was let down somewhat in performance by only having a standard hard drive. The drive does come with 32GB of mSATA cache to boost storage performance, but that's not enough to meet the performance point of a notebook running a full fledged SSD. Even if you forgive the notebook for the lack of an SSD, at the very least, Dell could have supplied a HDD rotating at 7,200RPM.

Having said that, the MacBook Pro that sports an equal level of processing power, is priced at a hefty S$3,588. Of course, the 512GB SSD and all of Apple's usual proprietary features try to make up for substantial S$899 price difference, but let's not forget that the notebook doesn't come equipped with a touchscreen and neither does it rival the QHD+ resolution. You also don't have NFC, the nice build or the storage space that's on the Dell XPS 15. And once you compare the similarly priced S$2,788 version of the MacBook Pro, you realize that Dell also offers more memory, better graphics and a better CPU.

About the only things you can nitpick about the Dell machine are its lack of an SSD and a larger battery capacity. You could definitely bump the HDD to an SSD yourself, but no matter the upgrade, the XPS 15 which you buy locally will still be fueled by the fixed 61WHr internal battery. Fortunately, it doesn't fare any worse in battery life than many other Windows-based multimedia notebooks.

Overall, Dell did an incredible job with the screen and aesthetics of the notebook and its performance was about expected. Precisely because of this, the Dell XPS 15 is valued on the steeper side as compared to other multimedia machines, but we believe what it has makes up for the premium you have to fork out for it.