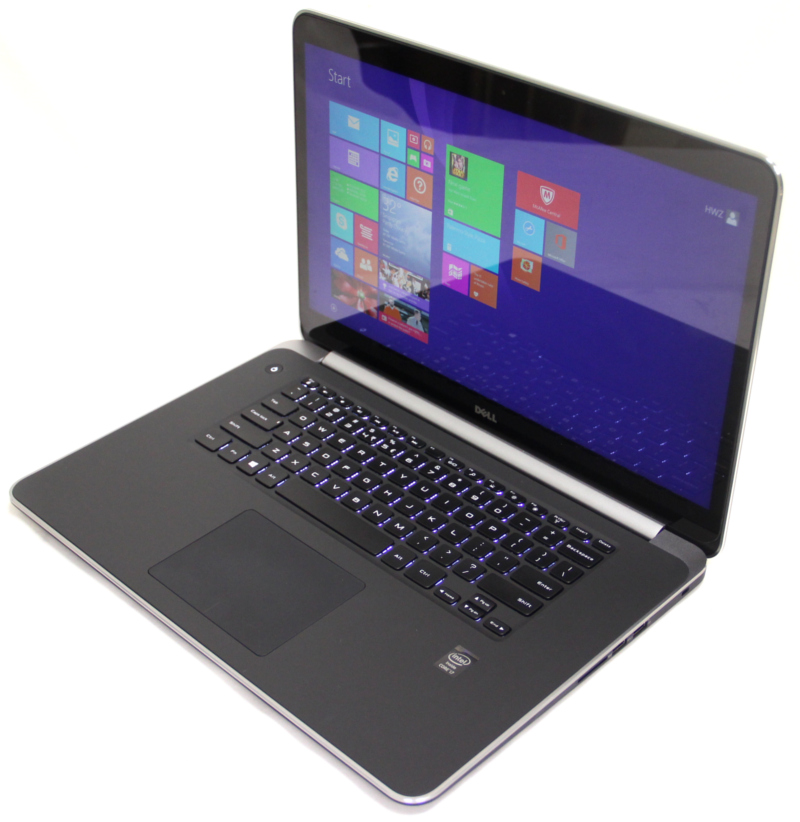 Convertible Ultrabooks and Tablet PCs are all the rage now, especially since many feature a multi-flip hinge or its equivalent that allows you to convert between notebook and tablet modes with ease. They come in a compact form factor and are light enough to be carried around conveniently. Sure, they're portable, but if you're looking for something with more processing power and a bigger screen to work with more complex applications, you'll still have to consider traditional clamshell multimedia notebooks. Today, we take a closer look at one such option from Dell's recently refreshed XPS 15.

At first impression, the XPS 15 bears quite a resemblance to Apple's 15-inch MacBook Pro with Retina Display, with very similar aesthetics and features.

What's surprising (and rather disappointing) is that Dell hasn't really upgraded the storage subsystem for the local version of the XPS 15, which is only offered in one configuration with a 1TB 5,400RPM HDD and a 32GB SSD cache. This is just a minor increment over the 640GB 5,400RPM HDD found in the old XPS 15. While the storage capacity has jumped significantly, performance-wise, the drive type used doesn't really help put it in line with the rest of the notebook's updated subsystems. In the US, Dell offers four configurations, two of which come with speedy full fledged SSDs. These SSD variants also ship with a larger capacity 91WHr battery as opposed to the smaller 61WHr capacity battery that our test unit is equipped. To put things in another perspective, the S$2,788 Apple MacBook Pro boasts a 256GB SSD with a 95WHr battery.

Having said that, we'll delve into further details to see how the S$2,699 Dell XPS 15 holds up in various comparisons besides the hardware comparisons we've outlined. But before we begin proper, here's the full specifications list of the Dell XPS 15:-

Unlike the MacBook Pro that's completely flat, the XPS 15 is slightly tapered all around the corners and measures just 18mm at its thickest point. Because of the XPS 15's carbon fiber base, the latter weighs less at a lightweight 2.01kg, outdoing the MacBook Pro Retina by a comfortable 100g. In fact, the entire package is quite light for its class, although it could probably have shaved off more weight  if it had an SSD instead of a HDD.

Like the MacBook Pro, the XPS 15 is crafted with a silver brushed-aluminum lid with a sturdy connecting hinge. Overall, the entire package looks meticulously-built, from its polished exterior, to its sturdy chassis enveloped in aluminum and carbon fiber. You'll not only appreciate it for its sleek looks, but also for emanating less heat in general compared to an all-aluminum chassis. 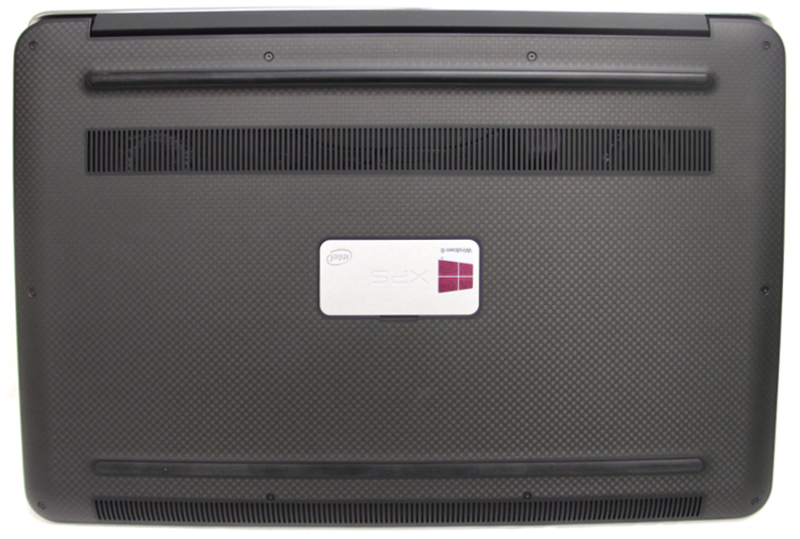 On the interior, a soft-touch silicone palm rest safeguards your hands against heat for prolonged periods of use compared. This aspect is more favorable than the MacBook Pro whose wrist rest area is bare metal, which can be cold initially but heats up during usage. However, we can't guarantee that the matte black palm rest on the Dell XPS 15 protects against oil stains and smudges though.

Interestingly, there's a handy little battery life indicator on the left side of the laptop (where some of the ports are housed). Another appealing function is that Dell incorporated NFC (which Apple doesn't yet support), so you can connect NFC-compliant devices (printer, camera, headset, etc.) and share content; all you need to do is simply tap these devices with the Dell XPS 15.

Most notebooks these days come equipped with a 300-nit brightness screen at best. The XPS 15 however, is armed with an impressive 400-nit touchscreen display. But the highlight of this 15.6-inch model is its staggering 3,200 x 1,800 pixels resolution (that's five times the clarity of a standard HD panel), coupled with a 160-degree wide viewing angle so you can watch a movie with your friends by sharing your screen.For a comparative note, this is actually exceeding MacBook Pro's Retina display with a 2,880 x 1800 pixels native resolution. While that sounds swell, the sad part is that many games haven't yet been optimized to leverage on the humongous 3,200 x 1,800-pixel resolution, but even before considering that, the limitation is at the discrete GPU supplied with the notebook. The GeForce GT 750M isn't really built to tackle full gaming glory at that resolution and as such, we recommend toning down the in-game resolution when gaming on the Dell XPS 15. This would be detrimental to the quality of game play somewhat, but at least it would remain smooth.

Fortunately outside of gaming, it delivers crisp visuals with vivid colors, and razor-sharp text. Surprisingly, even under intense sunlight, there’s not much glare despite its gleaming surface. However, its reflectivity is quite an issue when viewing less vibrant content. We also found the smooth touchscreen relatively accurate and responsive, and navigation is generally fluid. Although the notebook has a wide bezel design, the XPS 15's edge-to-edge Corning Gorilla Glass NBT display ensures adequate protection against accidental scratches. 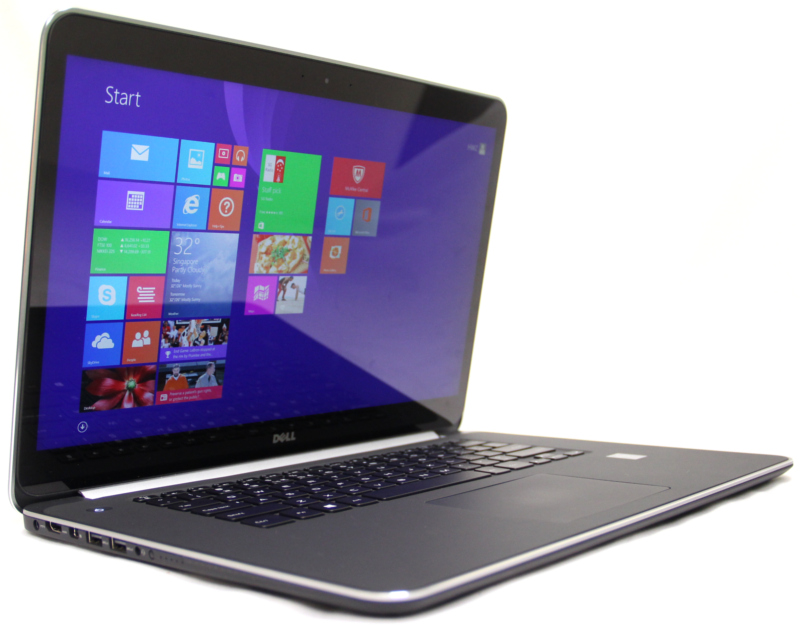 Engineered with Waves MaxxAudio Pro to boost sound performance, the speakers are situated at the front of the base, facing forward, so music is projected amply, and naturally. The location of the speakers is another plus point - it doesn't affect sound quality, as sound is projected exactly the same, regardless of the lid's position. Again, the XPS 15 wins hands down in this aspect, as the MacBook Pro's speakers are parked along the sides of the keyboard, so listening experience is compromised when the lid is not fully up. Understandably, the XPS 15 lacks in bass (as with most notebooks), but it instantly atones for that with its loud audio. At least, that will serve you well when you're gaming, or watching a video. For video communication, the XPS 15 integrates a widescreen HD webcam with dual array digital microphones. 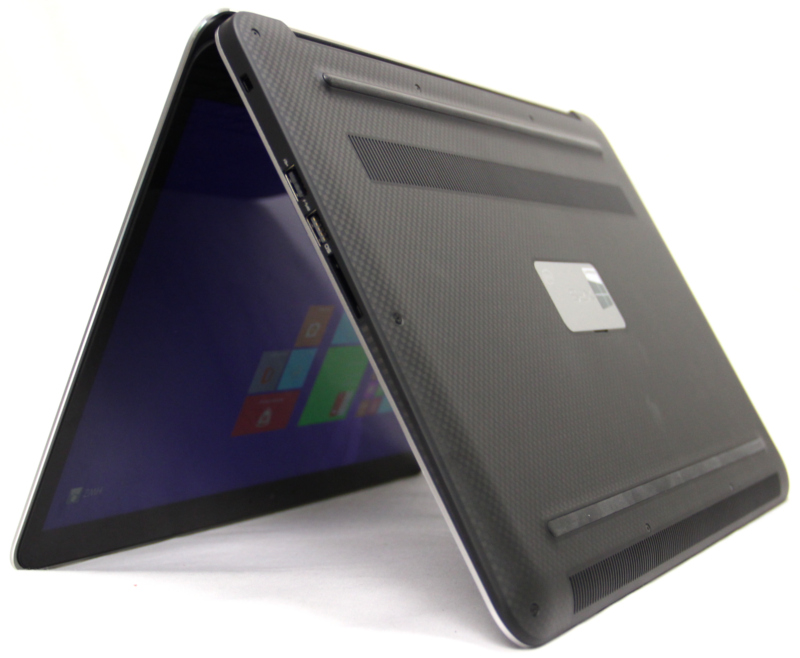 The chiclet-style backlit keyboard seems strangely modest in its 15-inch frame, leaving a lot of unused space at the sides. Dell could have better utilized the extra space to house a number pad (like a few other 15-inch notebooks). Backlighting is present, but the XPS 15 only lets you toggle between two levels of brightness (which doesn't seem too much anyway). Also, the stretch of Function keys (as well as arrow keys) are bizarrely smaller than the rest of the keys, such that you may have to squint in order to strike the correct key. Again, Dell could have elongated the Function keys and extended the keyboard in the direction of the trackpad.

The rest of the keys are soft and easy to strike, so you may end up with more typographical errors as the keyboard registers any key that your fingers may have unintentionally skimmed while traveling back and forth. To compensate, you might notice your wrists awkwardly 'floating', in your bid to hit the keys more accurately; you'll even fumble with the minute arrow keys sometimes. Nevertheless, after you get accustomed to the entire keyboard island, you'll find typing a breeze, with the soft-touch silicone palm-rest offering adequate support for your wrists. 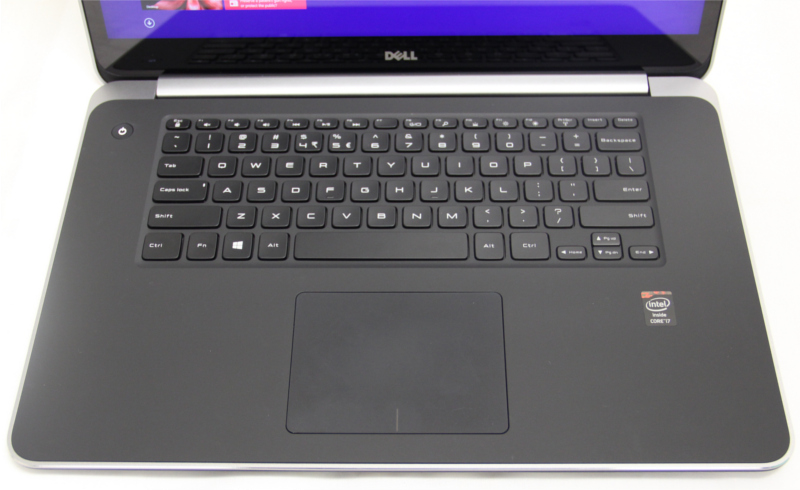 The trackpad feels velvety and polished, with a glassy texture coated in a sheer matte finish that's consistent with the XPS 15's interior (which might pose a problem if you are working without ambient lighting as the trackpad isn't backlit). Although its surface is not as smooth as MacBook Pro's, the XPS 15's trackpad is marginally bigger, and Windows 8 gestures worked well.

The new XPS 15 comes furnished with the usual array of connectors you expect from a multimedia 15.6-inch notebook, including three USB 3.0 ports, a USB 2.0 port, a mini-DisplayPort, an HDMI output, a 3-in-1 media card reader which supports SD, SDIO, and SDXC cards, and a Noble lock (which fits the more familiar Kensington Security Slot).

In order to maintain a slim body, Dell has opted to not inherit the DVD drive from its predecessor. Like the MacBook Pro, the XPS 15 doesn't come with an RJ45 Ethernet jack, so you'll have to use an adapter or wireless connectivity for internet access. Both USB 3.0 and 2.0 ports are colored black (USB 3.0 ports are usually blue), so you can't really distinguish between the two at a glance, unless you edge closer to read the label (or commit the location of the only USB 2.0 port to your memory). All four USB connectors come with PowerShare, so you can charge your mobile devices using the laptop's battery (even if the notebook is in sleep mode or turned off). 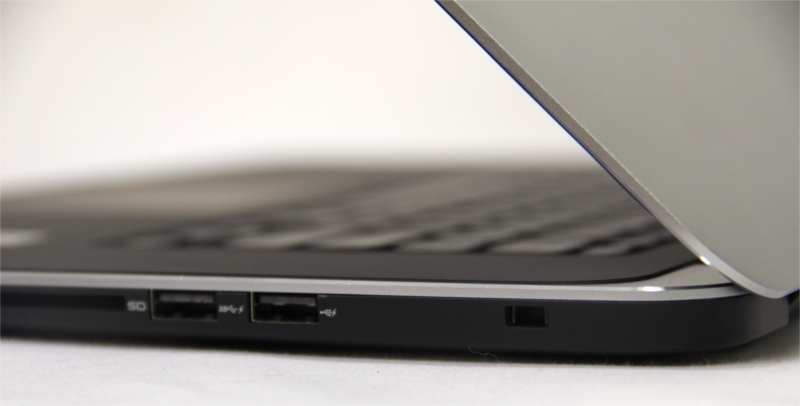 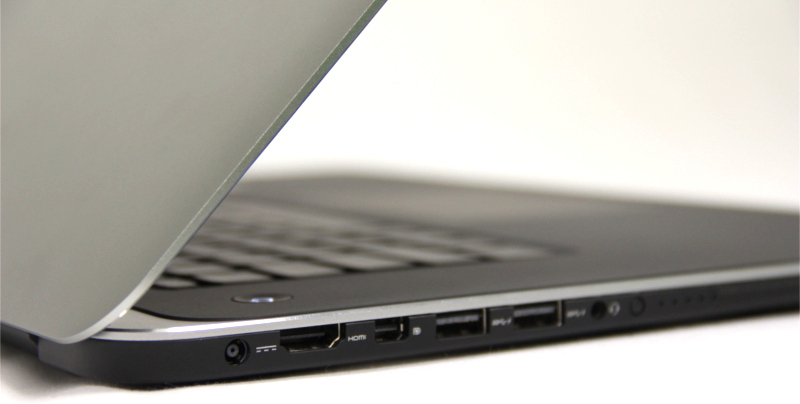 Write a Review
Compare This | Specifications
Polished, sturdy body with carbon fiber composite base
Only 2kg for a multimedia 15.6-inch notebook
3,200 x 1,800-pixel resolution panel
NFC connectivity
Only 5,400RPM HDD (no SSD)
Higher capacity battery option not available
Slightly expensive
Our articles may contain affiliate links. If you buy through these links, we may earn a small commission.
Sponsored Links