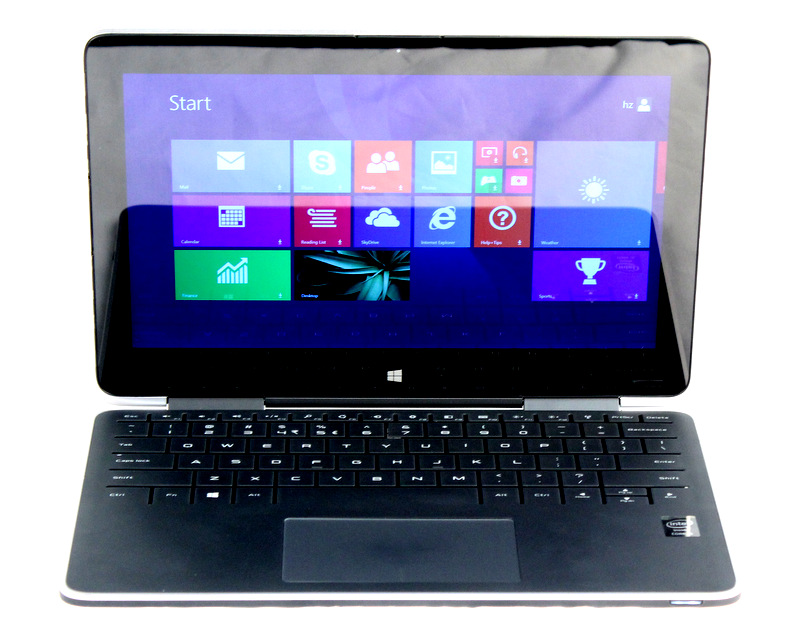 If you haven’t heard, Dell is now a private company, which means it now has more creative control over their products. Hopefully for consumers, this means more products that are better designed, with less restrictions due to the pressure for profits.

The Dell XPS 11 here is a product of the pre-private Dell, and is an 11-inch version of the very well designed Dell XPS 13 that didn't get a re-design (just upgrades) since its launch in 2012.

Having the XPS 11 looking almost exactly like the XPS 13 was a good move on Dell’s part, as there’s isn’t much about the look and feel of the XPS 13 that really bogged it down.

However, while the Dell XPS 11 can easily be mistaken for simply being an entry-level notebook, compared to the XPS 13, it really isn’t. In fact, it has several features that can’t be found on the XPS 13, like its ability to transform into a tablet with ease, its QHD display and its flat, touch keyboard.

Converting into a Tablet 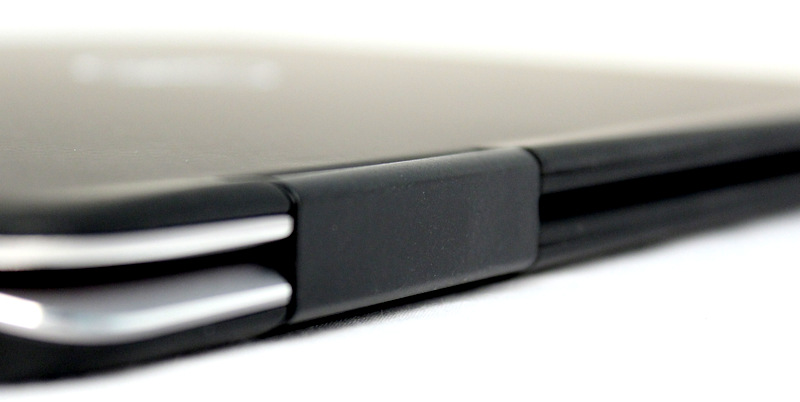 Before you write off the XPS 11's ability to transform as another over-designed trait that's unnecessary, we'd like to point out that it uses the same method that the Lenovo Yoga 2 Pro uses - two hinges that allow the display to flip 360 degrees backwards.

It’s actually surprising to see a Dell notebook utilizing this transformation method, since Lenovo claims that the hinges that allow for this seamless transformation, had been patented. It's likely that Dell licensed the use of this design, or the mechanism is slightly different from Lenovo’s hinges. Whichever's the case, we hope that future notebooks are able to use these hinges for transformation because they’re incredible easy to use. All you have to do is flip the display all the way backwards, and the notebook becomes a tablet.

But of course, the drawback of using such a method of transformation means that your keyboard will inevitably become the back of the machine in tablet mode, and the stand in display mode.

Lenovo’s Yoga notebooks disable the keys once the lids are flipped, so there will not be any accidental key presses. Unfortunately, the keys themselves don’t go anywhere, and would still be an annoyance in tablet mode. The ThinkPad Yoga solves this problem by having the keyboard well rise to become flush with the keys, which is nice, but adds to the cost. 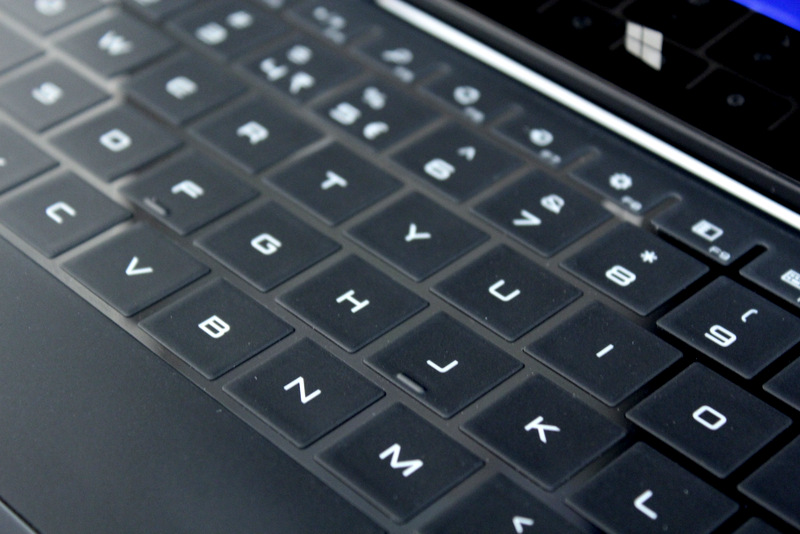 So far, the Dell XPS 11’s approach seems to be the most logical and cost effective. Instead of having any fancy keyboard mechanism to tuck the keys away, the Dell XPS 11 has a touch keyboard. It has a silicon overlay that extends from the keyboard to the palm rest. It’s soft and rubbery, which makes it quite comfortable to touch, and provides friction to keep the machine safe in your hands.

The touch keyboard also reminds us of the Microsoft Touch Cover, which has a similar touch keyboard. In practice, the typing experience is pretty much the same. There is no tactile feedback when there is a keypress, save for the click sound Windows makes when you type on its software keyboard. This means if you're working with the volume off, there is practically no feedback at all.

While this may not affect some who are used to typing on a software keyboard on their tablet, we found that typing accuracy via this keyboard is somewhat affected. This could be due to the keyboard's small size (due to its 11-inch display size), lack of tactile feedback, or a combination of both. What we can say for sure however, is that with enough time typing on the touch keyboard, your fingers will get used to it, and your typing errors will reduce over time. 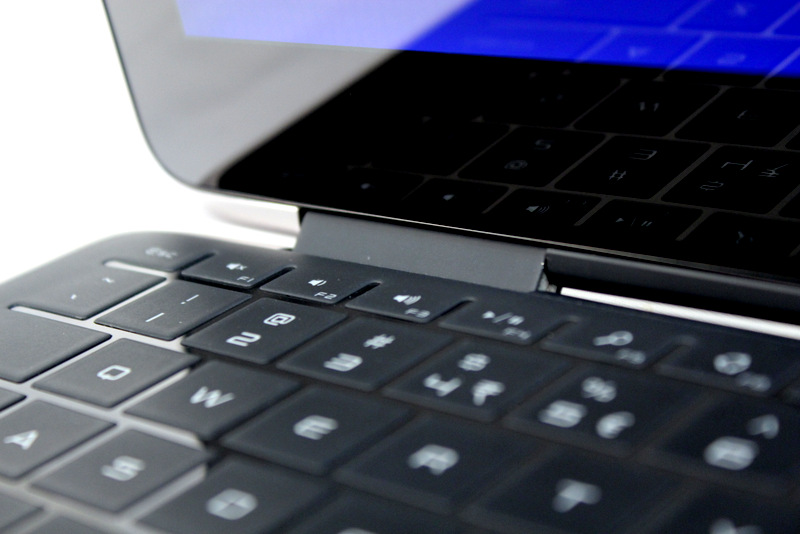 There are also a few other things you need to take note as well. Unlike a software keyboard which only requires the lightest of touches to register a keypress, the keyboard on the Dell XPS 11 requires the use of a little bit (just a tiny bit) more of force to trigger a keypress.

We also found that the silicon material tends to trap dirt when the machine was used in stand mode. It’s easy enough to clean off, but could cause the silicon material to wear off and lose its texture after some time. Another thing to take note is that this keyboard doesn’t play well with long fingernails, as the nails will prevent the touch keyboard from sensing your fingertip. 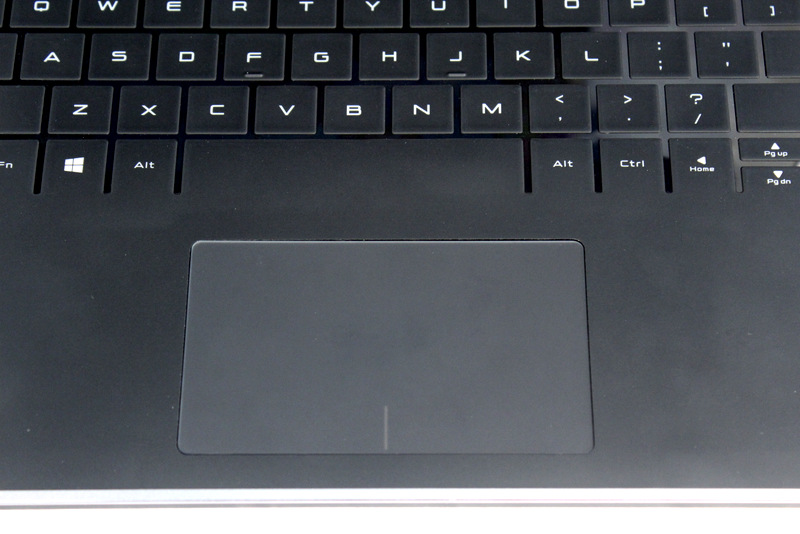 One thing we like about this backlit keyboard though, is just how good it looks on the Dell XPS 11. It’s somewhat flushed (except for the bumps that separate the keys, so it has that futuristic look that will get you envious looks at the local coffee shop.

As for the machine's trackpad, it's made of glass with a matte feel that allows for smooth navigation - as you'd expect from a premium notebook. There's not much else to say about it except it works well, and we had no issues with its sensitivity. 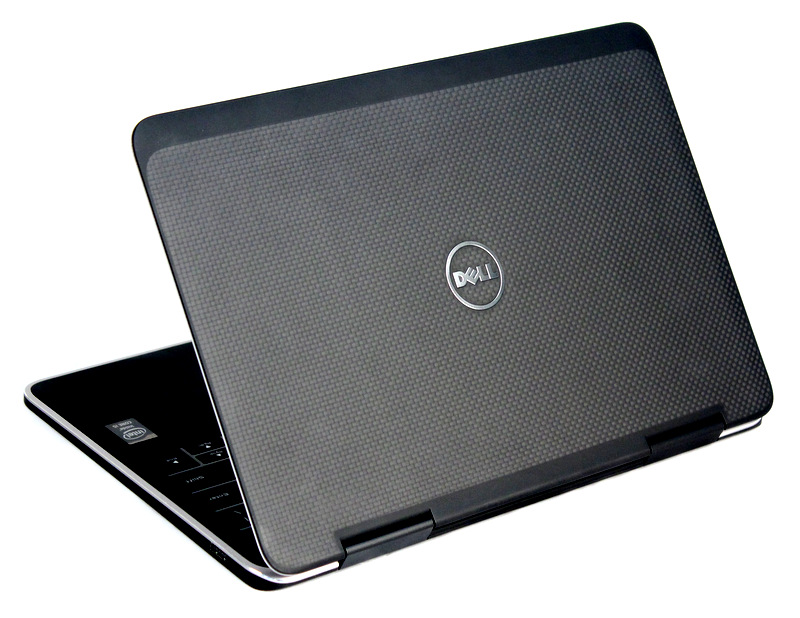 To Dell’s credit, it’s not just the keyboard that looks great. The whole machine, designed to look like the XPS 13, looks stunning. The lid and bottom of the machine is covered in carbon fiber, and you’re able to see the classic carbon fiber pattern clearly.

Carbon fibre is a material that’s meant to be tough, yet light. But we’ve come across notebooks with carbon fibre chassis that feels more plastic than premium (read: Sony Vaio Pro 13). On the Dell XPS 11, the machine feels much more solid, thanks to the matte resin-like material that’s used on top of the carbon fibre.

There’s also a machined aluminum frame along the lid and bottom of the machine that further reinforces the rigidity of the whole machine, and adds to the premium look of the machine. Like we mentioned earlier, the Dell XPS 11 isn’t simply a smaller, cheaper version of th XPS 13. Besides its premium build and touch keyboard, the Dell XPS 11 also has an extremely sharp, multi-touch display. It may only be 11.6-inches, but it has a QHD resolution (2,560 x 1,440), which is great for consumption of movies and photos. Unfortunately though, it’s not an IPS panel, so viewing angles for this otherwise great display isn’t that fantastic.

To accompany that very sharp display, the XPS 11 has a pair of very powerful speakers. They’re really loud for a small machine like the XPS 11, so music and movies won’t be a problem. Expectedly, cranking the speakers up to maximum volume produces some distortion that some users might not like.

The speakers are also placed on the side of the machine, so sound is spread out well enough that even in low volumes it’s still very clear. The problem with the speaker placement is that when the XPS 11 is in tablet mode, you'll have to ensure that you're holding the bottom half of the tablet, as holding it any higher will block the sound. Unfortunately, it's also too heavy (1.13kg) for prolonged single-handed use. Fortunately, that's where the machine's display mode comes in handy. The keyboard would be out of the way, and it allows the device to rest on your lap or tabletop with ease, while you enjoy your movies and music.

Write a Review
Compare This | Specifications
Good build quality
Decent battery life
Multiple usage modes
Touch keyboard not easy to use
Pricey
Our articles may contain affiliate links. If you buy through these links, we may earn a small commission.
Sponsored Links