Cyberpunk 2077 (PC) Review: A decent game for PC gamers but it could be so much more 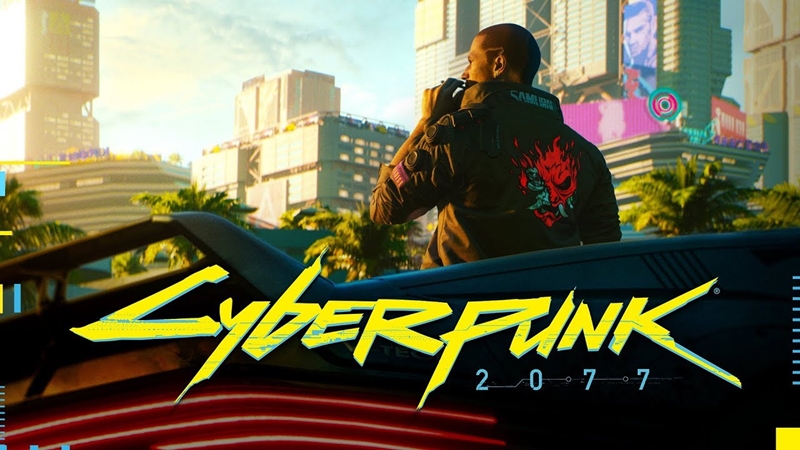 Let's be honest: we all know the console versions of Cyberpunk 2077 are literal dumpster fires right now - the streets of Night City are littered with a myriad of performance issues and bugs by the dozen. Cars are being thrown into the skies by invisible forces, characters walk around with their junk poking out and some quests can't even be completed courtesy of disappearing NPCs.

Accordingly, it's no exaggeration to say CD Projekt RED isn't having a good time driving on "that side of the road", and neither are players, for that matter.

Fortunately, the PC version of the game is a wholly different (and much more docile) beast, and despite the presence of a few bugs here and there (none of which are really game-breaking), it's generally enjoyable for the most part. Of course, aside from performance issues there are quite a few things that really holds the game back from being a solid 10/10 pick, so with a bit of luck the developers will tweak these in subsequent patches and updates.

Anyway, as mercs say in Night City, let's see what the job is. 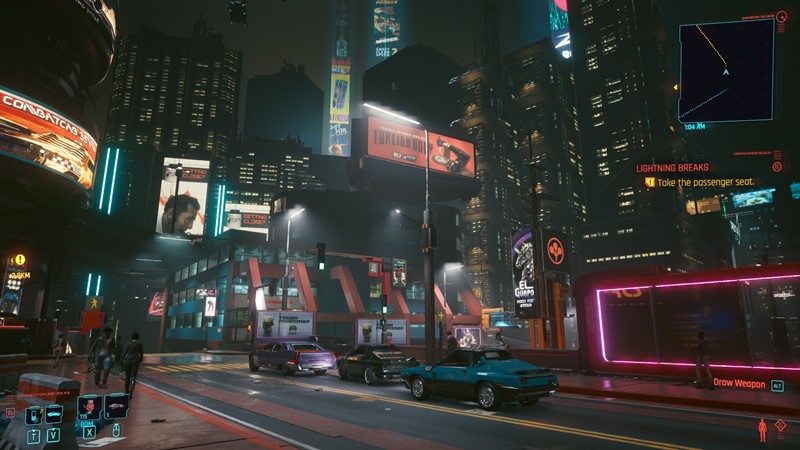 By now, everyone should have at least gotten a glimpse of the general concept of the game, so we'll just toss you a quick crash course of the setting and narrative. Set in a dystopian world several decades in the future, you play as the streetwise mercenary V, who's looking to make a name for themselves in the fictional metropolis of Night City. However, after a job that should have been an easy ticket into the "big leagues" goes horribly wrong, V is suddenly put on the clock to find out how to remove a deadly biochip with the long-dead Johnny Silverhand's personality construct engraved onto it.

Frankly, as far as the story is concerned, CP2077's isn't exactly the most innovative kid on the block - the whole "working against the clock to find a cure" trope is a commonly-used one. However, what I do find unique and impressive is the way in which this life-threatening ailment is slotted into the "greater scheme of things". 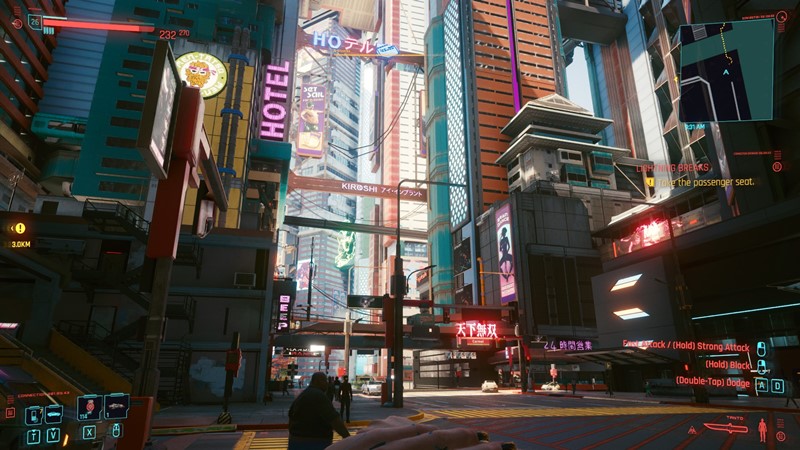 You see, in a futuristic world where everyone is basically more metal than organic flesh and can essentially be whoever they want to be, just saying that V is dying of some conventional illness just doesn't cut it. Heck, it'd be utterly lame.

As such, I really like that CD Projekt has given V an ailment that isn't so much one of the flesh as it is one of the soul - their very individualism is at stake. It's an interesting take on an otherwise overused canvas, and this uniquely "human" aspect of the game, exemplified by V's constant personal conflicts between practicality and principle throughout the story is an excellent contrast against the cold, capitalistic ideals and ruthless violence of Night City.

A city of dreams...and disorder 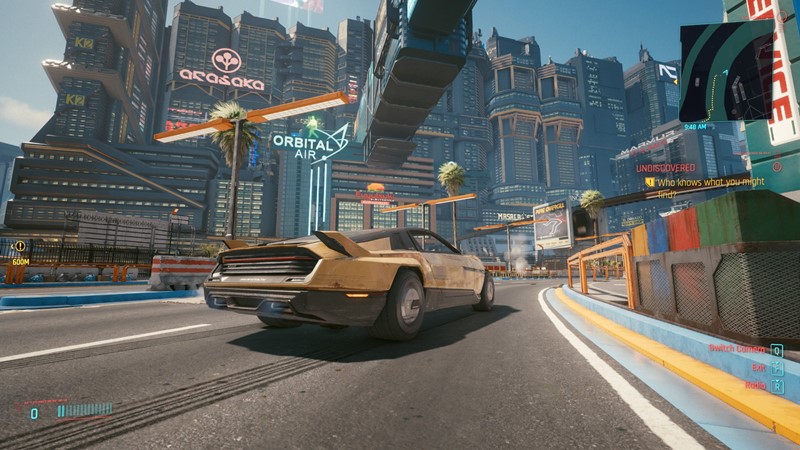 Speaking of Night City, this is by far one of, if not the most enormous and beautiful worlds I have had the fortune to explore, so much so that merely calling it "expansive" would be an understatement. There is a lot to see in this gorgeous dystopian metropolis, and as CD Projekt themselves refer to it, this "melting pot of cultures" presents itself very clearly through the game's aesthetics. From sprawling industrial estates to seedy red-light districts and posh, modern skyscrapers, Night City's architecture presents a mishmash of people from different walks of life that's both awe-inspiring and immersive.

Of course, like any real metropolis, Night City has its own unique flavours, traditions, and shifting dynamics between political powers. Crimes like robbery, murder, and gang violence are an everyday occurrence here, and the cops are often as corrupt and ruthless as the criminals they bring in.

The city is ruled over by two main factions. On one hand, we have the gangs and other criminal organisations, while the other faction consists of the police, puppet government, and the all-powerful corporations that rule from behind the scenes. 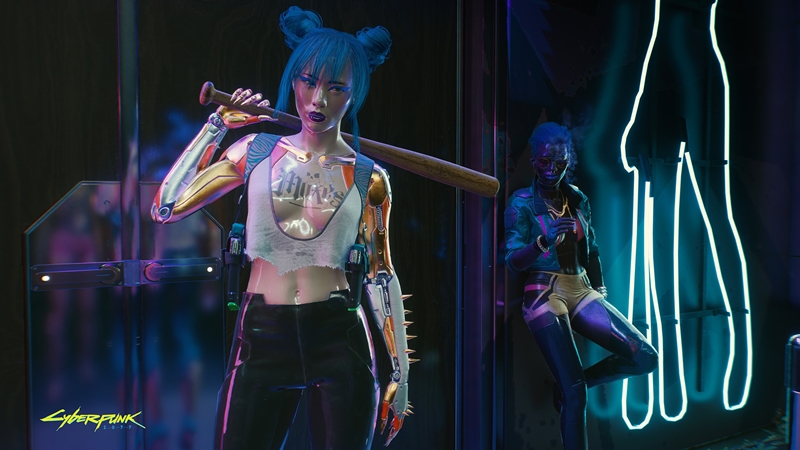 The most prominent of these is the Arasaka Corporation, a private security and tech firm that essentially has Night City under its thumb, and owing to their extensive reach, influence and resources, anyone who so much as breathes out of turn is swiftly and methodically dealt with by Arasaka's agents. Meanwhile, the grey area right in the middle is where mercenaries like V come into play - money talks in Night City just like it does in the real world, and every task, no matter how dirty or underhanded has a price.

Long story short, it's a really crappy and dangerous place to live, and the game makes sure you're well aware of that as a player right from the get-go, regardless of which of the three lifepaths you select. I personally feel it's one of the best depictions of corporate domination and oppression I've ever seen in a game, and it helps explain why many of the characters do and think what they do.

Pulling out the iron 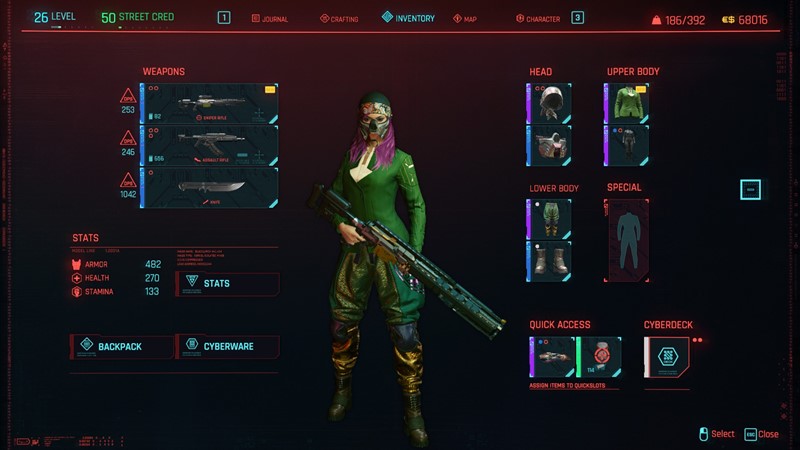 In many ways, CP2077's gameplay is kind of like Night City itself - a melting pot of many different things, and you could say the whole is generally greater than the sum of its parts. There's no shortage of variety - you can venture out and explore the world like in Grand Theft Auto, take baddies down head-on like in Call of Duty, hack and control tech Watch Dogs-style, and even play detective by looking for clues in braindances. And that's just half of it too - we haven't even talked about romancing characters.

Anyway, the combat is probably where CP2077 scores the highest for me - I absolutely adore the myriad of options and approaches players can adopt for each mission, and either approach is similarly satisfying. If you like to kick down the front door and go in guns blazing, be my guest. But if you prefer a stealthy, assassin-like approach, then that's fair game too.

Personally, most of the time I prefer taking the head-on approach, simply because being able to wield an impressive variety of weapons, from conventional armaments like rifles, pistols, and katanas to more unorthodox weapons like the Mantis Blades and Monowires just makes you feel like a one-man army. It's really like an RPG in that sense - you're always on the lookout for newer and better equipment, although that ends up resulting in a couple of problems, which I'll go into detail further on. 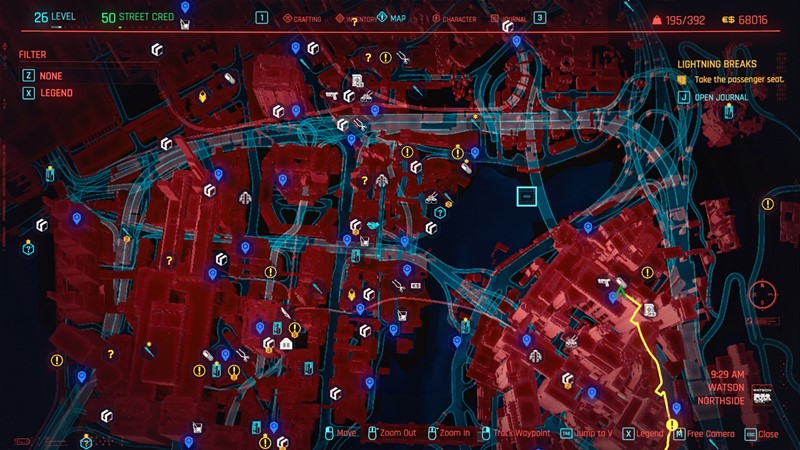 But what do you do when you're not following up on the latest story missions? Well, to put it simply, you either explore the city at your leisure, or you go to work. V is a mercenary by profession after all, and in Night City, "work" comes in a few forms, namely fixer gigs, and some good old vigilante justice. The former has you functioning as a bounty hunter for "fixers" all across the city - they'll give you tasks to complete from time to time, such as rescuing hostages, assassinating key personnel, or burning down a drug lab, among others. Meanwhile, the latter turns you into a secondary set of eyes for the police and often involves random instances of criminal activity you encounter on the street.

To be frank, the primary storyline isn't what made the game interesting for me - I've seen my fair share of such plotlines, even if it was well-presented. Rather, it's actually the eye-popping number of side missions, fixer gigs and other randomised encounters that really kept me playing and wanting to explore more. In fact, you'd probably need more than a week of consistent play just to browse through everything, and some of them can be quite fun to do especially if you're using it to test a new weapon or ability.

Speaking of which, it's time to jump into the exploration half. But before we do that, remember what I said earlier about there being lots to do and see in Night City? Well, that's not entirely true, and here's where we start talking about the game's less-than-optimal bits.

Write a Review
Compare This | Specifications
Night City is aesthetically gorgeous and expansive
Combat packs a punch and supports multiple playstyles
Narrative is rather short and predictable, but the presentation is great
Gameplay is quite varied and interesting
Judy Alvarez
There isn't as much to explore as you'd expect
Character development feels rather shallow in general
Perk and Attribute requirements are sometimes awkward and counterintuitive
Crafting and upgrading equipment yields poor returns for a ton of effort
You can only have one character at a time
Our articles may contain affiliate links. If you buy through these links, we may earn a small commission.
Sponsored Links