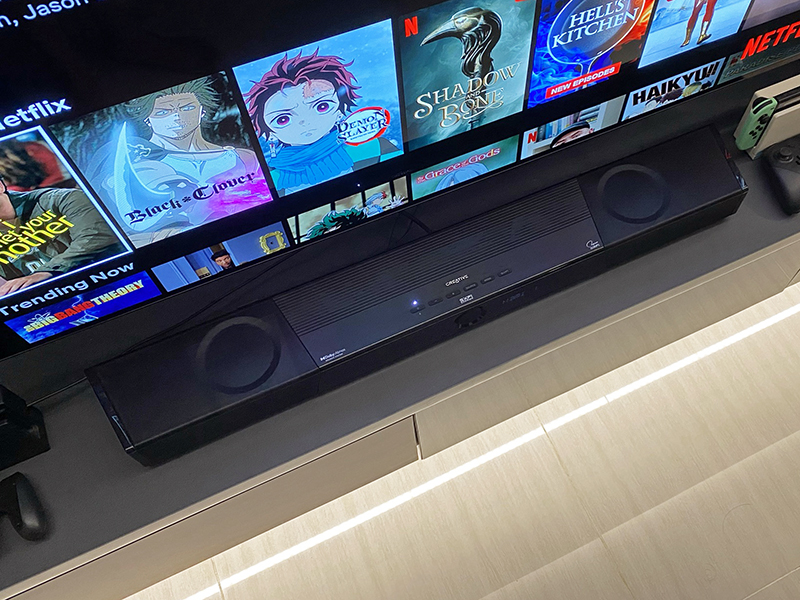 Bringing home a theatre experience without the hassle

When I moved into a new flat last year, one of the most important projects I had in mind was an up-to-date entertainment centre where I could enjoy movies, music, and games from the comfort of home, especially with a pandemic raging outside.

But like all apartment dwellers, I soon ran into the very real problem of space. Or the lack thereof.

Fitting a nice 4K OLED TV along with all the necessary gaming consoles and entertainment boxes was no big deal. But what about an audio system? Try as I might, there is just no way I could include a traditional 7.1-channel set-up without sacrificing a whole load of space. Not to mention the wiring required and buying the right amp.

A high-calibre sound bar seemed like the best solution to simplify setup needs while not losing out on audio quality. So when Creative reached out with a pre-launch unit of their new SXFI Carrier for review, it sounded like the perfect unit.

Announced more than a year ago at CES 2020, the SXFI Carrier checked all the boxes on paper: Dolby Atmos audio, 7.1 drivers, a 10-inch wireless subwoofer, built-in support for its proprietary Super X-Fi technology, relatively compact form factor, and a price point that promises not to break the bank (in relation to their US$6,000 Sonic Carrier). After much waiting, the SXFI Carrier has finally debuted locally last month.

On top of it all, the SXFI Carrier brings a lot of “firsts” to the table: it’s the first soundbar in the world to be developed and fine-tuned in collaboration with Dolby, and so it’s also the world’s first Dolby Atmos Speaker System (DAAS) soundbar. Naturally, it’s also the first soundbar in the world to have Super X-Fi (SXFI) built-in (although that’s only over headphones, which we’ll cover in more detail later).

Primarily, Creative wanted to bring their elaborate and super expensive Sonic Carrier to the mainstream where everyone can enjoy its sound traits in a smaller form factor. Creative thinks it has managed to capture that essence with the new SXFI Carrier that’s more accessible and less imposing. After using it for months on end as a daily driver, we’re ready to give our verdict. Should you open your wallet up for the SXFI Carrier? Read on to find out, but better yet, if you would like to experience what my editor found, here's a video version of the review with our detailed account:-

There’s only so much you can do with the design of a soundbar. Think of a black bar that produces sound, and you’ve probably covered most of the designs on the market.

So, it’s the little things that make all the difference.

In the case of the SXFI Carrier, Creative has done an excellent job differentiating itself from the competition, striking a balance between sleek and stylish and a little bit of geek flair. In some ways, it actually looks more like a more sophisticated and powerful Sound BlasterX Katana (without its RGB lighting of course) than the statement-making Sonic Carrier. Even so, Creative has managed to make the SXFI Carrier look unique among the hundreds of other black bar solutions. 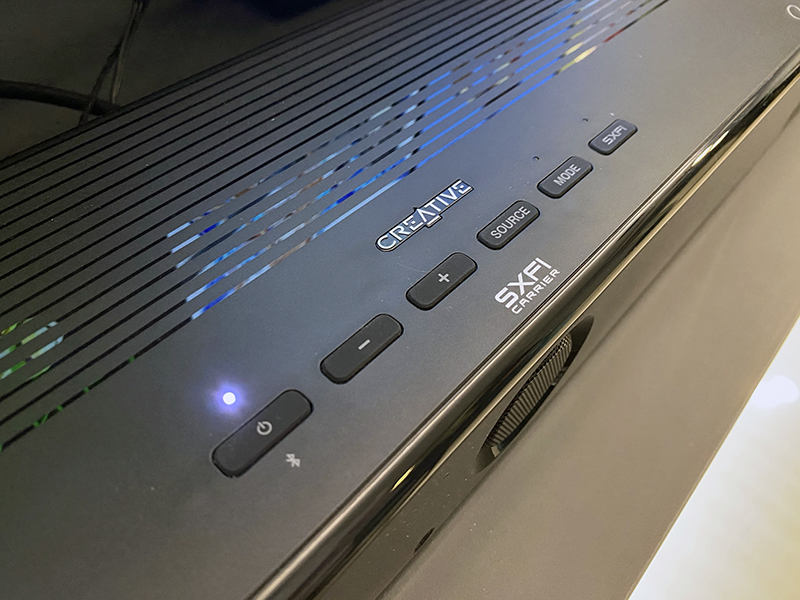 On the top of the soundbar, you’ll find a smooth, matte, soft plastic finish forming the centre, with a bunch of buttons for turning it on, controlling the volume, and switching between listening modes.

The soft plastic gives way to a glossy panel as it flows down to the front of the soundbar. Here, you’ll see a simple LCD segment display that conveys basic information, a 3.5mm headphone-out, and a little speaker grille for one of its seven drivers.

I was surprised at how basic the LCD display was. It does have a bit of a retro vibe, which some people might like, but it’s so primitive that it could have come straight out of the 1990s. An actual LED display that offers richer information would have been better here but the current display suffices for the given functionality and options provided. 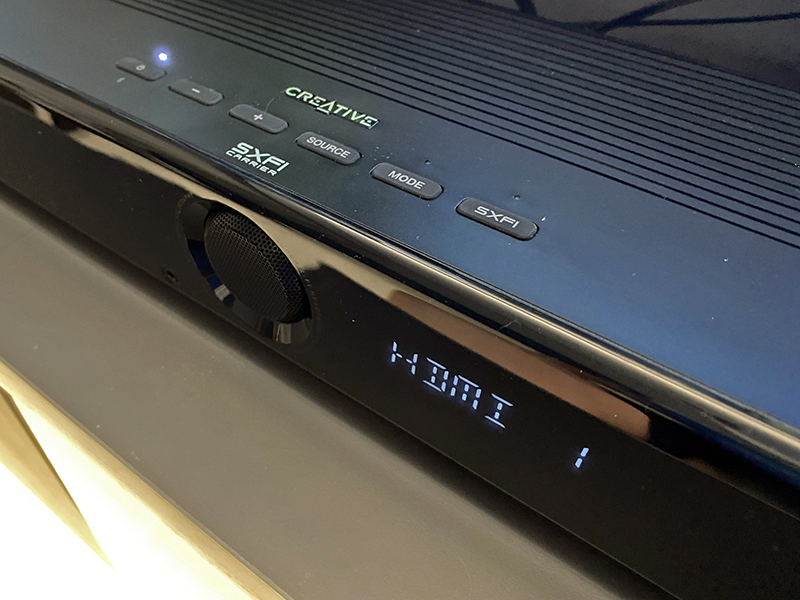 Both ends of the soundbar are wrapped entirely in grilles, housing more drivers. The sides stick out at an angle, giving it a more edgy look compared to a traditional boxy design.

Creative says this angling helps it arrive at the perfect Dolby Atmos acoustics signature, and tells us we shouldn’t place anything on either side of the soundbar to achieve the best results. While that might be difficult given all the various gadgets and gizmos crowding our TV console these days, it’s worth noting nonetheless to help you get the best out of the SXFI Carrier. In short, while this is a compact soundbar for its capabilities, given the various speakers all around, it’s best to give it the breathing room to help it perform.

Around the back, you’ll find a range of ports, including dual HDMI 2.1 inputs, one HDMI-out (eARC) port, optical-in, aux-in, USB-C audio input, and of course, a sub-out for the accompanying subwoofer (more on that later). All this means the soundbar works great with even the latest TV standards like 8K TVs with HDR and high refresh rates, along with multi-channel uncompressed HD audio streams that you’ll find in some of the latest shows delivered via Netflix or Disney+ from your TV. If you own 4K Blu-ray discs and a suitable player, you’re covered too. Optical and USB Type-C connectors come in handy to pipe high-res audio from your game console(s).

The ports are however quite well recessed at the rear of the soundbar, so they are not readily accessible until you tilt the 3.6kg soundbar up to get clear access. This is not a task you would often want to perform, though it’s manageable when the soundbar is placed in front the of TV. If you choose to wall-mount it, accessibility is a chore, but that is a common issue for most soundbars given their form factor. 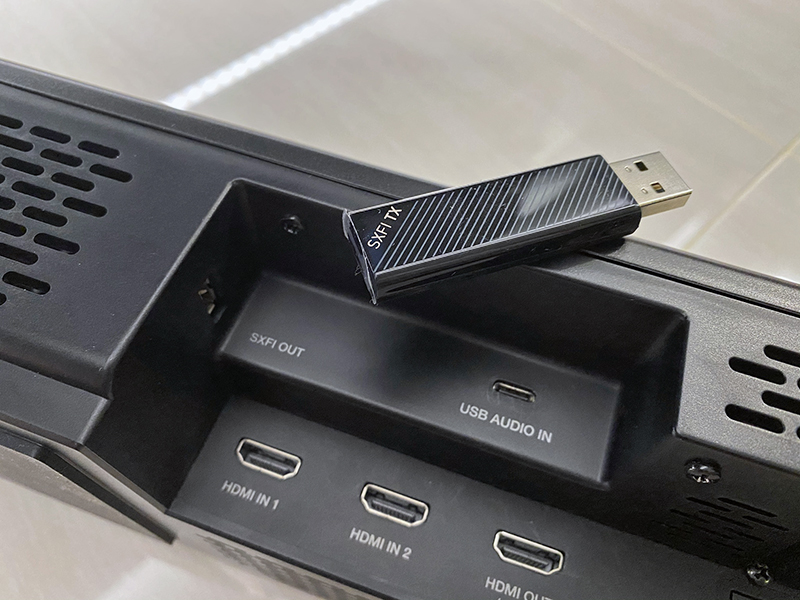 You’ll also find a SXFI-enabled USB audio output, which you can use to hook in Creative’s SXFI Theater headphones via a special SXFI USB dongle. This enables the soundbar to transmit an ultra-low-latency, high-performance wireless audio to the SXFI Theater headset, so you can enjoy late-night movies and games without disturbing anyone else in your household. In fact, it’s arguable that the experience is even more immersive and enjoyable with the headphones, rounding out the SXFI Carrier’s complete proposition as an all-in-one soundbar.

Despite the impressive build quality of the soundbar, Creative seem to have skimped on its remote control. It feels cheap and plasticky, and doesn’t seem to be very responsive. There is a noticeable lag every time I input a command, which is an annoying tick that shouldn’t exist in the year 2021 – especially for a home audio product that costs north of four digits. 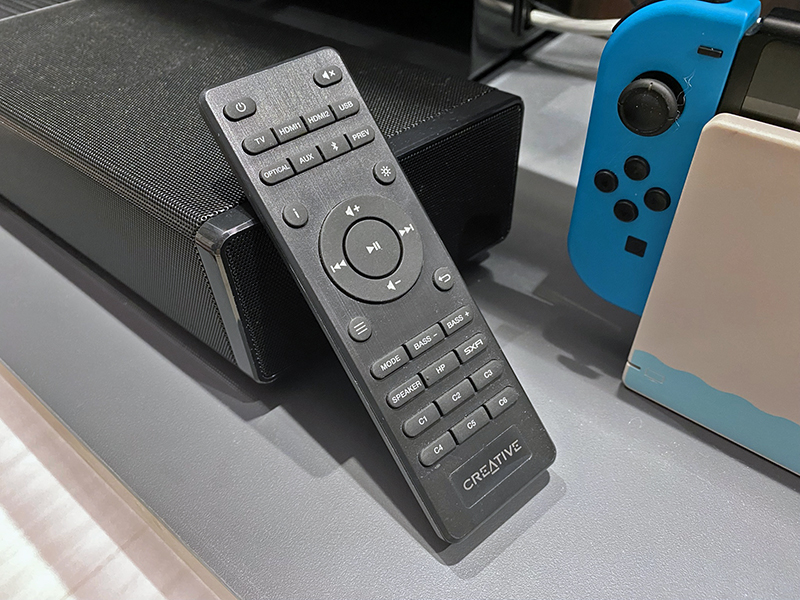 The lag makes it a chore to perform many basic functions you’d expect to do easily. Perhaps the most annoying one is the frustration of having to switch between playback modes on the soundbar, such as “Movie” or “Music”, as you better adapt the sound experience to match the content played back.

To do so, you must cycle through the options to arrive at the one you want. However, if you happen to get impatient and hit the button one too many times (remember, because the input lags)… you’ll have to cycle through the options all over again. Other functions like switching inputs, Bluetooth on/off and toggling between speakers or headphones also face a similar experience.

If you choose to use your TV’s remote to control the soundbar, you might find some respite, but you can’t stay off not using Creative’s own remote for all functions unless you have a universal programmable remote (though the leader in this space has stopped producing them). Thankfully, the soundbar's companion app can double up to replace the remote for a better control experience.

While we are on the subject of lag, do note that you would also experience a minute audio delay as you switch sources or pause/play content. The video would have started ahead of the audio by a second or two, and this is yet another annoyance we had to come to terms with. These may seem like nitty-gritty matters, but they can be enough to annoy some people. Creative explained to us that the delay is intentional in advanced hardware such as the SXFI Carrier handling many audio formats/decoders and it helps prevent unexpected audio spikes that could occur while switching between scenes or sources and thus hurt the audio hardware and/or cause discomfort for the users. Perhaps a future firmware might tighten the delay period perceived? Time will tell. But don’t let these bits detract you from what it’s really good at; read on.

Write a Review
Compare This | Specifications
Impressive overall performance for a soundbar
Excels at Dolby Atmos content and mainstream music
Wireless subwoofer
Good connectivity options
Compact main body
Built-in Super X-Fi
Easy to use app
Reasonably priced
Subwoofer is enormous
Remote control is unreliable
Some inconsistent performance
Rather average soundstage for music
No wireless rear speakers
No Wi-Fi support
No DTS decoder
Our articles may contain affiliate links. If you buy through these links, we may earn a small commission.
Sponsored Links