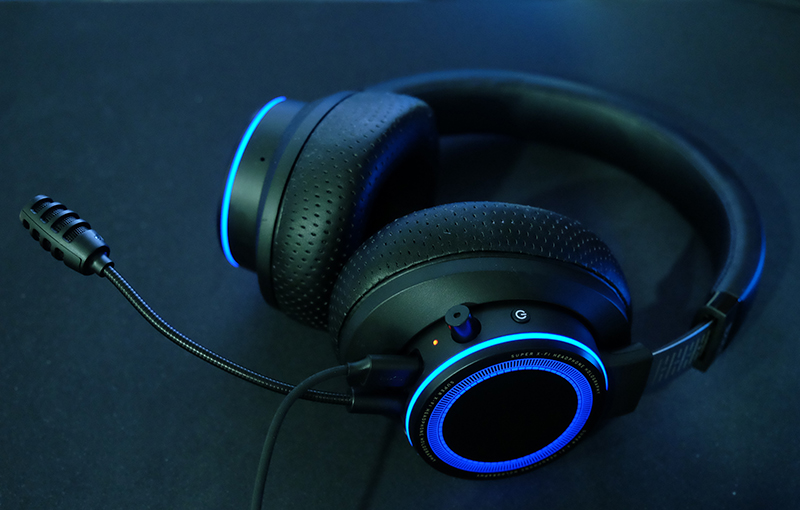 Creative is back with a second Super X-Fi infused gaming headset, and it's more capable than ever. Alongside its almost surreal headphone holography tech, the SXFI Air Gamer supports a myriad of connectivity options, from USB-C and USB-A to Bluetooth 5.0, 3.5mm, and even a microSD card slot. This means you can connect it to your PC, mobile device, a console like the Nintendo Switch, or even load up songs from a microSD card when you truly want to be untethered and undisturbed from your phone.

It shares the same design language as the SXFI Gamer, but as its name suggests, it's slightly lighter and weighs 335g to the latter's 349g. The weight difference isn't substantial, but every bit counts when it comes to long-term comfort. Creative has made other improvements for comfort as well with a perforated leatherette (as opposed to the non-perforated variety for the previous headset) covering over the plush, memory foam ear cups. This makes them significantly more breathable, so you won't be raring to rip them off after just a short stint. That said, I'd still have preferred the use of fabric like Razer does on its BlackShark series of headsets since leatherette will likely flake or peel after some time. 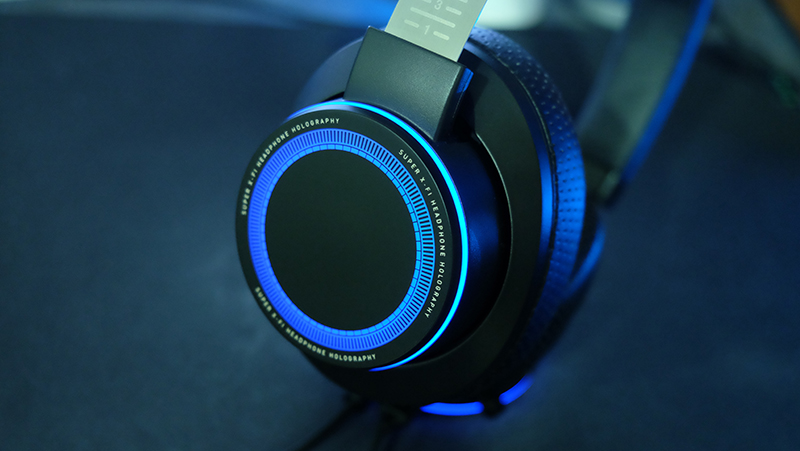 The large ear cups encase your ears, but they still let in quite a bit of ambient noise. There are 11 numbered notches on the metal headband that allow for symmetrical adjustments on both sides, so you can get it to fit just right. In addition, they're able to rotate slightly from left to right, allowing them to fit differently shaped heads better. They are pretty comfortable to wear over long hours, but the headband could definitely use some extra padding as I could feel it digging into my head after a while, just like the original SXFI Gamer.

The predominantly plastic construction means that this still doesn't quite feel like a premium product, even though it is absolutely packed with features. The plastic helps keep the weight down though, which is definitely welcome. Finally, it shares the same RGB lighting capabilities as its predecessor. The lighting isn't my favourite and I find it a bit tacky, and you're still limited to just a single, customizable zone.

All the controls and ports are located on the left ear cup, alongside the CommanderMic boom microphone and a tinier NanoBoom mic. Yes, that's two different detachable microphones on one headset. Given that the SXFI Air Gamer is intended for use with mobile devices as well with its Bluetooth connection, the small NanoBoom mic can come in handy if you want to use it outside. It's a lot more discreet, even if you do give up some vocal clarity. 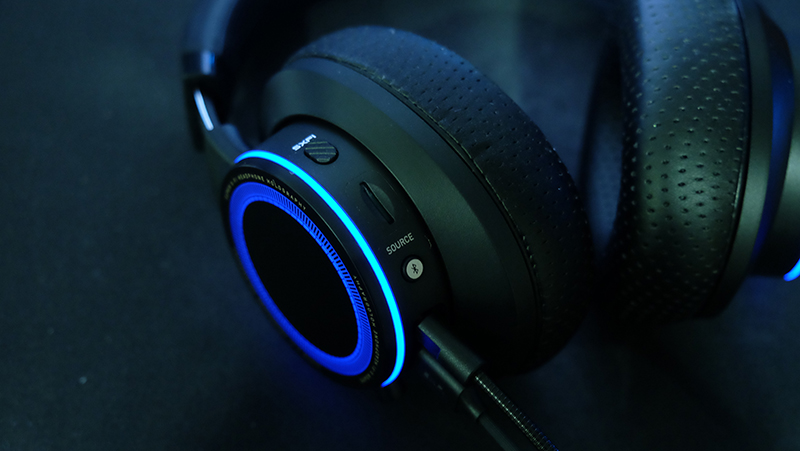 That's just the tip of the iceberg when it comes to what the SXFI Air Gamer can do though. A nifty feature called GamerChat lets you chat with friends via Bluetooth while playing games when the headset is connected to a USB source. So while the Nintendo Switch doesn't allow voice chat, you can use this feature to connect the headset to your phone and chat with your mates over Discord. Nifty!

There is a dedicated source button for switching between Bluetooth and USB connections, in addition to a button for toggling between different Super X-Fi modes – on, off and Battle Mode (more on this later). The microSD card slot sits between the two buttons, but I didn't have a microSD card slot on hand to test it out. It's pretty neat that you'll be able to access your music on the go without connecting the headset to anything, but I expect this functionality to be rudimentary at best. After all, you're not able to select songs manually and are limited to skipping to the track you want. I'm also not sure who still has audio files lying around unless you're an audiophile that loads up their player with lossless music. And even then, files of that quality would be wasted on a gaming headset like this one. You can do this using the touch-sensitive panel on the left ear cup. Swipe forward to navigate to the next track, and backward to return to the previous one. Volume controls are done here as well via an up or down gesture. Double-tapping functions as a pause and play button. I miss the tactility of the dedicated volume control wheel on the SXFI Gamer, but the touch panel is responsive and works well enough. But what's really sorely missing is a microphone mute button – to mute the mic, you'll have to do it via software, which really isn't the best if you need to silence yourself in a hurry. This was again something that was available on its earlier wired-only counterpart.

To use the Super X-Fi headphone holography, you'll need to connect the headset via USB as Bluetooth doesn't yet have the bandwidth or latency to deliver Super X-Fi audio convincingly. Unfortunately, the supplied Kevlar-reinforced USB-C cable is tough and stiff, and I'd have preferred something a little less unwieldy. There is also a USB-C to USB-A adapter if your PC lacks a USB-C port. The USB-C port on the headset itself is a little awkwardly located, however. It sits in front of the CommanderMic, which means the two often get crossed when you're trying to bring the mic closer to your mouth. Having said that, Super X-Fi tech is incredible as always. Unfortunately, it's a bit of a hassle to set up because you have to download the mobile app and then scan your ears to create your own custom profile. As you can imagine, the latter isn't the easiest thing to do. But it's well worth it. Super X-Fi widens the soundstage significantly, making music sound richer and more immersive. It also helps with the slight sibilance present in the default mode, but you do sacrifice some amount of detail.

Super X-Fi mode is my go-to selection for music, movies and games like Monster Hunter: World, throwing you right into the middle of the action. However, it's not the best for voice chat, as I find that it adds an unnatural amount of distance between you and the speaker. While I enjoyed Super X-Fi audio for the most part, like any other surround audio tech, the outcome may not appeal to everyone's tastes and your personal mileage would vary.

Then there's Battle Mode, which is tailor-made for more accurate positional audio in first-person shooters. I tested it in CS:GO and Valorant, where it confers a distinct sense of space and directional accuracy. For instance, I could tell clearly when gunfire was coming from slightly behind me and to the left. It also brings your teammates' voices closer to you, which helps with clarity. First introduced on the non-Air SXFI Gamer headset, I thoroughly appreciated this mode when I needed clarity above all other traits. However, I thought it could do with a little more boost in the low end to help better distinguish the sound of single footfalls on different surfaces in the map.

All things considered, this is one of the better-sounding gaming headsets around. Even without Super X-Fi, it has a good balance across the frequency spectrum, avoiding the common pitfalls of muddy lows and shrill highs. At S$199, the Creative SXFI Air Gamer is a bit more expensive than its predecessor. You're paying for a lot more versatility with GamerChat, multiple connectivity options, and dual microphones, which is well worth it if you're looking for a headset to use with different devices. There are some flaws, such as the stiff USB-C cable and lack of a microphone mute button, but Creative deserves points for the sheer ground it covers with its rich feature set that's priced just S$20 more than its original counterpart debuted. The touch panel is pretty cool too, and there's simply no overstating the ability of Super X-Fi to create a super fun and enveloping sound stage.

The dilemma seeps in when you start to check out Creative's current going rate for the SXFI Gamer and the real predecessor for the SXFI Air Gamer - the SXFI Air. Here's a quick table to help you differentiate how they stack:-

Don't think Bluetooth and touch controls are on your priority list? Then the SXFI Gamer is an option at nearly half the price, but it doesn't pack a NanoBoom mic if you need something that doesn't stick out. Lastly, if you don't need the gaming-centric enhancements, you can save quite a bit by opting for the SXFI Air.

However, if you're after a good all-rounder with no compromises, you really can't go wrong with the new SXFI Air Gamer. With stunningly accurate positional audio, decent finesse with music, and the ability to use it with so many different devices, it's a solid package.

Ready to pick one up? The Creative SXFI Air Gamer goes at S$199, and it's available on Creative's official website.

Write a Review
Compare This | Specifications
Super X-Fi successfully expands the soundstage and adds richness and depth to music and movies
Battle Mode delivers super accurate positional audio in FPS games
Works with PC, Mac and most major consoles
No dedicated microphone mute button
Kevlar-reinforced USB cable is too stiff
Headband could use more padding
SXFI magic only works via USB
USB-C location gets in the way of CommanderMic boom when used together
Our articles may contain affiliate links. If you buy through these links, we may earn a small commission.