Creative Sound Blaster GC7 Review: It's a nice cherry to have on your audio ice cream cone

It's a nice add-on 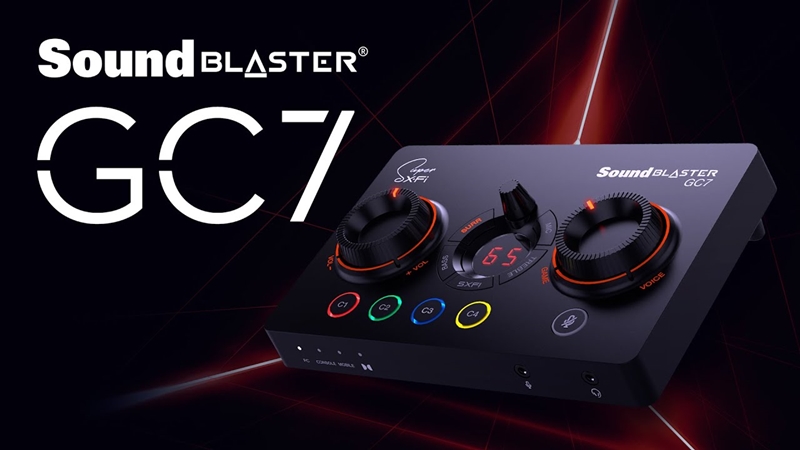 When it comes to modern gaming setups, it's fair to say that having solid audio is just as important as a good monitor or CPU. After all, without one, your top-shelf Call of Duty experience game is only going to feel like a fraction of what it should be, to say nothing of the competitive disadvantage you'd be at not being able to hear an enemy sneaking up on you.

So, yes - a good audio system is integral to a good gaming experience, but what then? What if you want to take your A grade to an A+? In such cases, you'll need to look beyond mere speakers or headsets - that's what USB sound cards like the Creative Sound Blaster GC7 are there for.

It looks pretty simple on the outside 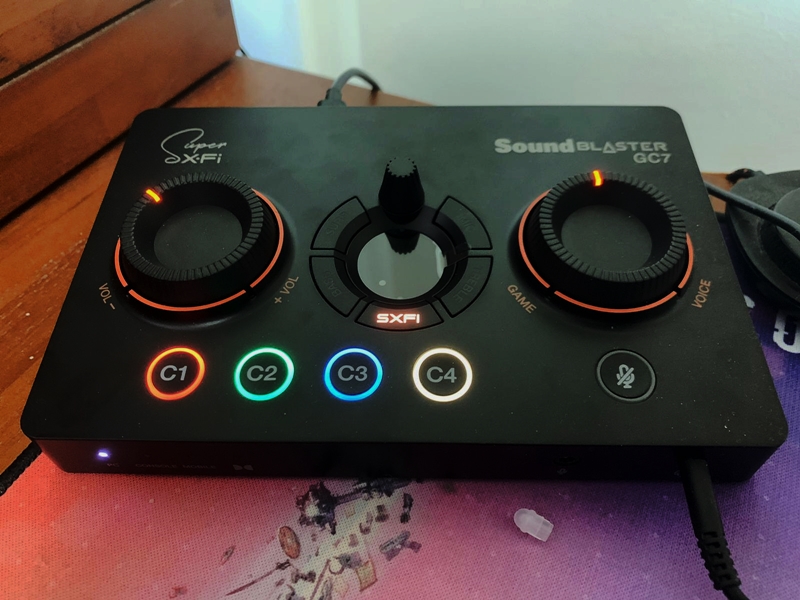 At first glance, this diminutive black block doesn't seem like much. Measuring roughly 17cm by 11cm with a rear elevation of about 1.5cm, the GC7 honestly looks more like the controller for an arcade machine rather than the digital-to-analog converter (DAC) sound card that it's supposed to be.

On the practical end, its small size also means it won't take up too much space on your desk, making it a decent choice for folks with more compact gaming and home entertainment setups. On top of that, one of the device's main plus points, as noted by Creative is the convenience of being able to control it with a single hand which, as I discovered later, proved to be rather useful!

Anyway, let's take a closer look at the hardware. Sitting on the left and right sides of the GC7's front panel are two large dials for the Master Volume and GameVoice Mix respectively, while another rotary dial resembling the one on a sound mixer sits smack dab between them. Below these knobs are another four RGB buttons that can be customised to bring up certain programs like Google Chrome via the Creative app, and a fifth "mute" button sits just to their right.

As for the audio specs, the Sound Blaster GC7 sports a dual DSP setup, featuring Super X-FI Headphone Holography and Sound Blaster audio processing, which allows users to really capitalise on immersion. It also comes equipped with the AKM4377 audiophile-grade DAC chip, which offers a low noise floor of <120dB, low distortion and enhanced clarity for individual sound effects. And for our streamer buddies, this chip also allows for streaming at up to 24-bit/192 kHz PCM playback. 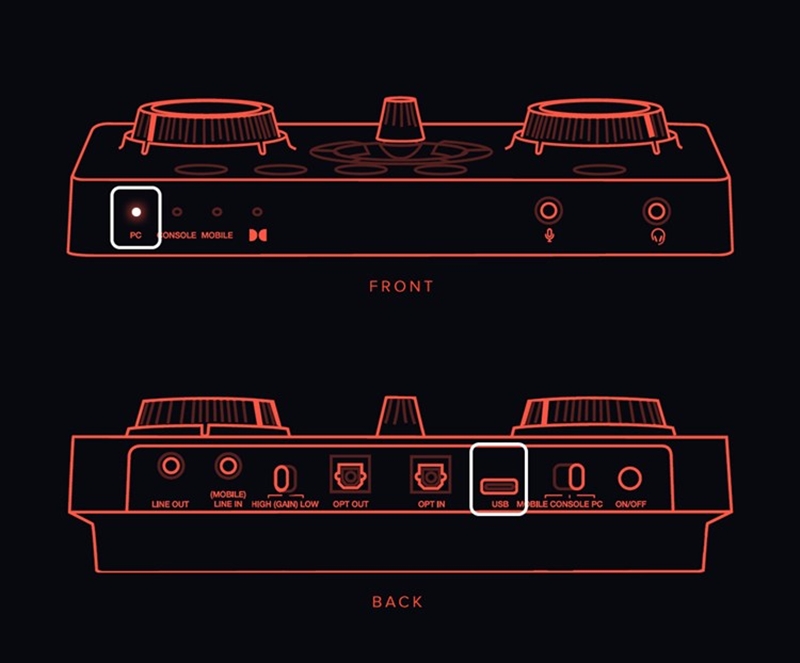 As for the ports, there are a total of seven on the GC7 - two on the front, and five on the back. The former includes a 3.5mm 3-pole mic-in and a 3.5mm 4-pole headset-in port, as well as a small display on the extreme left which shows users whether they're currently in PC, Console, or Mobile mode. The GC7 is compatible with a wide variety of devices, including PC, PS4, PS5, Nintendo Switch, and even mobile phones, making it much more versatile than its appearance might suggest.

As for the back end, the five ports include one USB-C port and a pair each of 3.5mm line in/out ports and optical input/output ports. These are interspersed between several miscellaneous additions like the power, platform mode, and headphone gain switches. 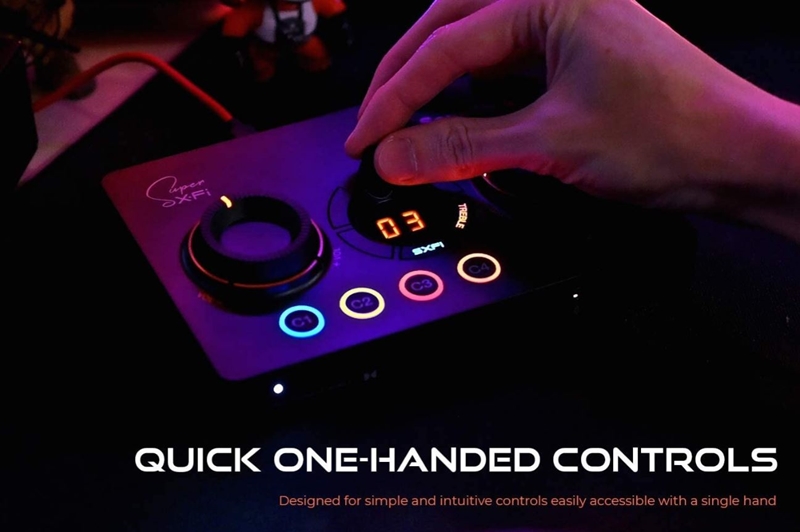 With the hardware out of the way, let's talk about the performance and experience. All things considered, this was a particularly unique device to test, seeing as we had to run it through a medley of entertainment media, from games to music and even the odd anime episode on Netflix.

First up on the testing checklist are of course video games, and I happened to be running a new playthrough of Borderlands 3 at the time, though I did take it for a spin in Black Ops Cold War's Zombies mode as well. As mentioned earlier, the GC7 proved to be much handier than I expected, especially with SXFI enabled.

Actually, I'll digress a little to talk about this. As one of the GC7's main offerings, the quartet of SXFI software modes provide an impressive array of audio boosts depending on what kind of media the user is currently engaging with. There are a total of four to choose from, which are denoted by the colour of the SXFI button - Green (SXFI On), Blue (SXFI Battle Mode), Orange (SXFI Off), and Red (SXFI Custom Profile).

Personally, I found myself switching the most often between SXFI Battle Mode and SXFI Off - the former feels great for games where directional audio is crucial like the aforementioned Black Ops since it emphasises both the direction of sounds as well as the distance (perfect when you're playing Zombies!), while the latter offers a solid all-around boost to clarity and impact for practically everything else. Oh, and if you're particularly interested in using it for high-stakes genres like FPS titles, then you can also try out the GC7's Scout Mode instead of SXFI Battle Mode. In short, this tunes your device to be even more attentive to small audio cues like rustling bushes and careless footsteps, ensuring that none of your opponents catch you with your pants completely down.

However, regardless of which mode you're in, improved audio clarity for both sounds and voices remain the common denominator. Not only did my shots and laser blasts in Borderlands 3 feel a lot clearer (and punchier!) than they usually do, but I also had a blast listening to various songs. I felt the music aspect was where the GC7's Dolby Surround 5.1/7.1 capabilities truly shone - Adele's Rolling in the Deep was particularly memorable, and pairing the singer's powerful vocals with the bass increments on the GC7 felt like something straight out of a live concert. Oh, and if you manage to hook up the GC7 via optical cables, you'll also be able to make use of Dolby Digital decoding to further enhance your cinematic experiences. 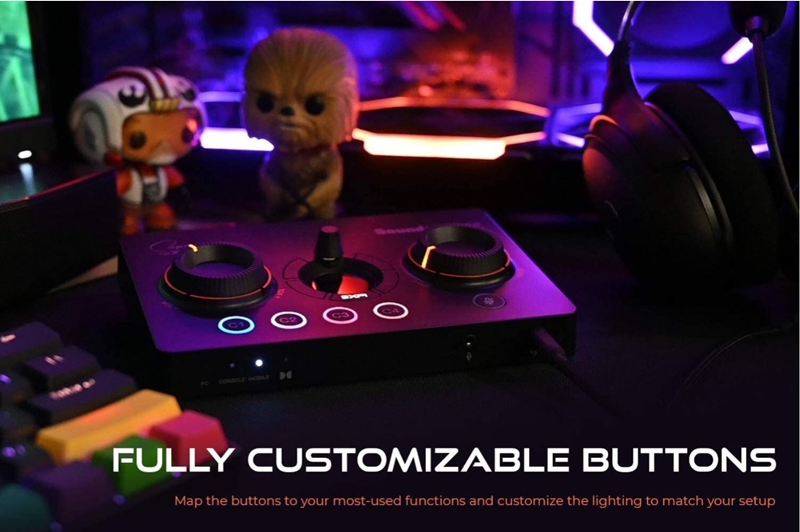 Spoiler alert: it gets better. And by better, I mean "even more customisation options"-better. After downloading the Creative app (here you go!), I toyed around with the custom button mappings and RGB settings, and I have to say the sheer convenience of having apps like Google Chrome or Sticky Notes a mere finger press away cannot be understated. Not only was it borderline effortless to look up and note down various bits of information whenever I wanted, but the gentle elevation of the sound card also allowed me to easily check which button I was pressing with just a glance. Needless to say, there are a bunch of other settings you can tweak within the app to suit your preferences. From various Equaliser modes to custom SXFI profiles (only available through the Super SXFI app on mobile), it's rather easy to get lost wading through the variety of options on offer.

As an added note, the quartet of customisable buttons (labelled C1 to C4), along with the handy GameVoice dial might prove especially useful if you like playing co-op with your buddies or streaming your games - you won't have to keep adjusting your microphone volume to interact with other people.

There's always a "but"

However, despite the various buffs that the GC7 offers, it is worth noting that users might see the biggest improvement to their audio output if they already have a decent setup to work with - the GC7 seems better at taking "A grade" audio experiences up to an "A+ grade", as compared to taking "C-grade" experiences up to a B. You're more likely to see a tangible difference to your audio output on a higher-end speaker set than you would a lower-end one, and then there's the price of the GC7 itself to account for as well. After all, there's hardly any logic in spending over S$200 for the GC7 just to enhance an S$80 speaker set - you might as well get one that costs $200, to begin with.

Naturally, this also assumes you already have an output device - you can't just plug it into your desktop without a speaker set and call it a day. So, to provide an analogy, if your speaker set is the bride and you're the groom, then the GC7 would probably be your ever-capable wingman, and there's no need for a wingman without the wedding itself.

Still, I can't deny that the Sound Blaster GC7 is useful on account of its versatility and the variety of miscellaneous additions it provides. Its compatibility is a big plus point as well - it's easy to toss it into just about any home entertainment or gaming setup given its small size. Sure, it might not take every single speaker in the world into the realm of the audio gods, but you will at least get something out of it. As such, I will say it's a great finishing touch to your audio ice cream cone if you don't mind forking out the cash - this "cherry" of sorts is good to have around, but by that same token, it's also far from being a "must".

Write a Review
Compare This | Specifications
Easy to use and customise
Excellent, user-friendly design that doesn't clutter up desks
Offers tangible improvements to audio output, especially in terms of clarity
Impressive variety of audio enhancement and miscellaneous functions
Presents more value if you already have a medium to top tier setup
Price point isn't the most user-friendly
Our articles may contain affiliate links. If you buy through these links, we may earn a small commission.
Sponsored Links