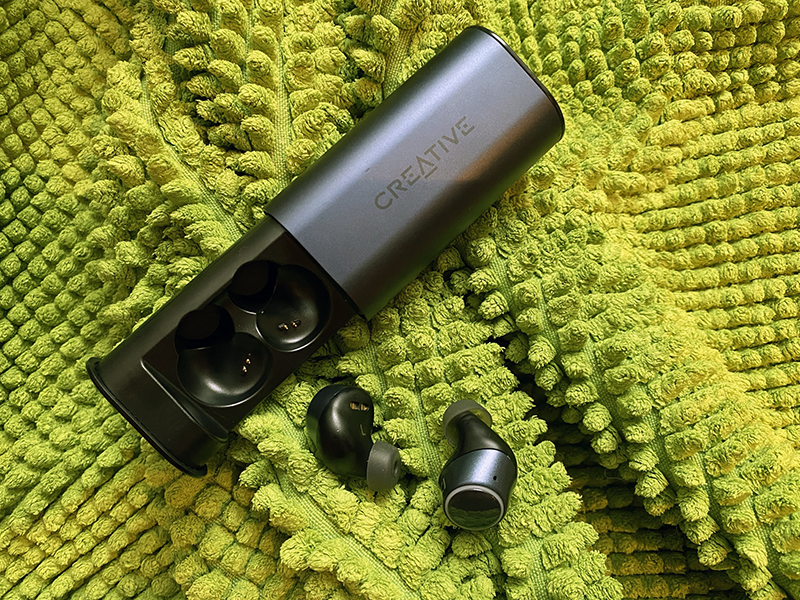 We gave Creative’s previous true wireless earbuds, the Outlier Gold (an updated edition of the Outlier Air), decent marks for its fashionable looks, good sound quality, and comfortable fit. However, it was set back by some negatives like poor controls and connectivity.

With the recently launched Outlier Air V2, Creative kept all of the good stuff while directly addressing some of our complaints. At the same time, it managed to keep pricing low and retains its status as one of the best affordable true wireless earbuds.

But the true wireless earbuds market is completely different now compared to a year ago. Does the Outlier Air V2 hold up against its competition? Let’s take a closer look.

At a glance, there’s barely any difference between the hardware design of the Outlier Air V1 and V2. Both the charging case and the earbuds retain the same design as last year’s model, which is not quite a good thing.

The case is very bulky, larger than almost every other true wireless earbuds models we’ve tested to date. Unless cargo pants with huge pockets are your style, there’s no comfortable way of stuffing the Outlier Air V2 into your jeans. It looks more like a mini power bank than a true wireless earbuds case.

But a saving grace of that bulk is its battery life. The Outlier Air V2 has one of the best-rated battery capacities on the market, rated for 12 hours of listening per charge and up to 34 hours total with the charging case. In all my daily normal use, I’ve never come close to depleting its juice.

The case also has very clear LED indicators (and simplified from earlier models) for the rough level of charge left in the case and each individual earbud. The latter will prove to be rather important because the earbuds don’t dock that well in the case. There were several times when I popped them into the case and one side ended up not charging because the pins weren’t connected. You have to wiggle them around while keeping an eye on the LED indicator to make sure they’re charging. 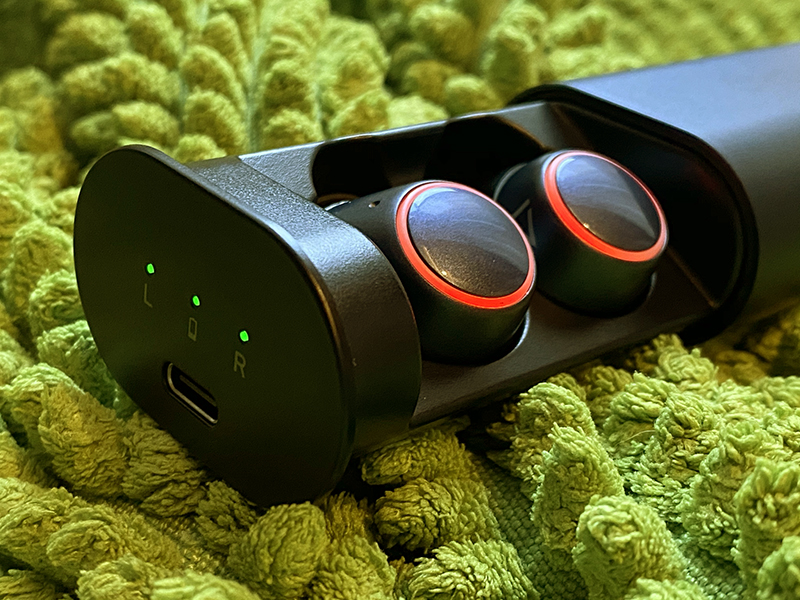 The Outlier Air V2 has the same slide-to-open mechanism as its older sister, and while it’s a novel distinction from your typical flip-to-open case, I must say I’m not a big fan of it. It doesn’t slide very smoothly and needs a fair bit of force to get going. It flexes and creaks quite a bit when completely pushed out and doesn’t feel very solid. These issues weren't noticed on the earlier Outlier Gold though. One unfortunate downside of the sliding case design is that I never seem to get it to slide out the right side on the first try. There’s always a bit of fumbling involved. Perhaps the next generation can include a spring-loaded mechanism and smoother tracks for a better feel? Or perhaps these are limitations of my test unit? I can only hope.

Once you pluck the earbuds out of the case, pairing is as easy as any other Bluetooth earbuds. The big round LED lights that ring each individual earbud is a nice touch, but only for a few seconds. They flash blue when connected and red when charging, but they’re otherwise inactive during use, which eases battery use.

They’re lightweight and fits well in the ear, and a couple of additional silicone tip sizes will help you find the best seal for your ears. They’re IPX5 rated too, so they’re tough enough to withstand splashes of sweat or rain. I took them for a couple of workouts at the gym and they had no problems standing up to the task.

Unfortunately, there’s no proper companion app for the Outlier Air V2, which is somewhat of a bummer. Sure, there’s the Super X-Fi app, but it doesn’t really count here since it doesn’t let you customize the earbuds in any way. Instead, the function of the Super X-Fi app remains exactly the same as in our previous review of the Outlier Gold: it uses software magic to expand the soundstage of anything that you’re listening to so that it feels like the sound is coming at you from a wider array of speakers instead of being stuck in your head. 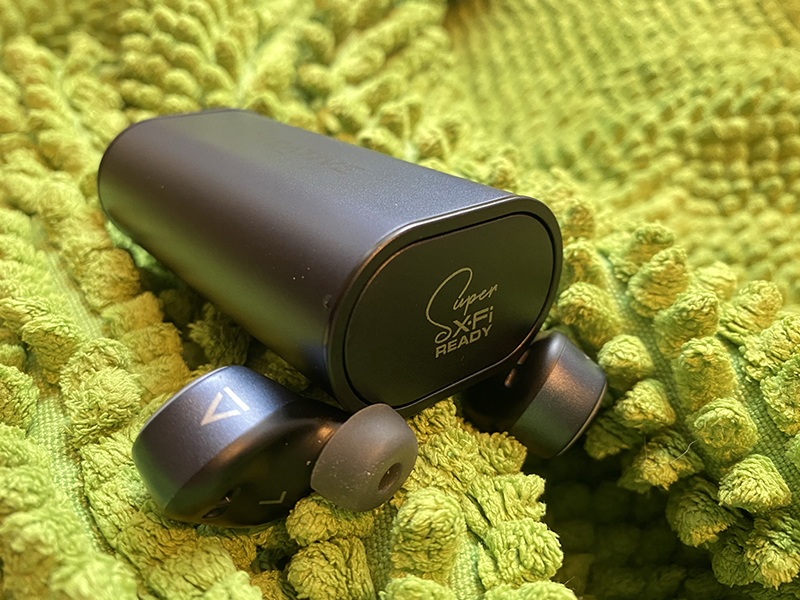 Super X-Fi is a great bit of software, and it works really well in all supported Creative products. Just check out our list of reviews here. Unfortunately, it’s no substitute for a proper companion app, which lets you maximize the use of your earbuds, from software customization features like touch controls to basic things like apply firmware updates. Even low-cost brands like 1More have started to offer useful companion apps for their earbuds, so we hope it’s something that Creative is paying attention to.

Without an app, you’ll have to settle for learning Creative’s built-in controls, which has a bit of a learning curve to them. Oddly enough, you won’t find single-tap controls on the Outlier Air V2. They’re all double or triple-taps. Creative says this helps to reduce accidental taps, which I suppose works perfectly well if that’s the case. But they do take a bit of getting used to. Fortunately, they are better than Outlier Air and Outlier Gold because it uses touch-based control and not button mashing that's required on the old models.

Speaking of usability, the earbuds support smart assistants like Apple Siri or Google Assistant to get things done for you hands-free like checking on the weather, turning up the volume, play next track, and many more. So if you can't get around to mastering the touch controls, you have some level of control over it via voice. Not a bad option.

The Outlier Air V2 is equipped with the same 5.6mm Graphene-coated driver found in the Outlier Gold and the Outlier Air. According to Creative’s marketing materials, using this fancy expensive material translates to better battery life and enhanced sound quality. Plus, the earbuds support for Qualcomm aptX, AAC, and SBC codecs mean high-res audio is still supported. Do note that aptX support isn't something that is supported on a lot of Bluetooth headsets, so the Creative gets a nod in terms of codec support.

Well, Creative has evidently got the battery life down pat, so what about the sound quality? 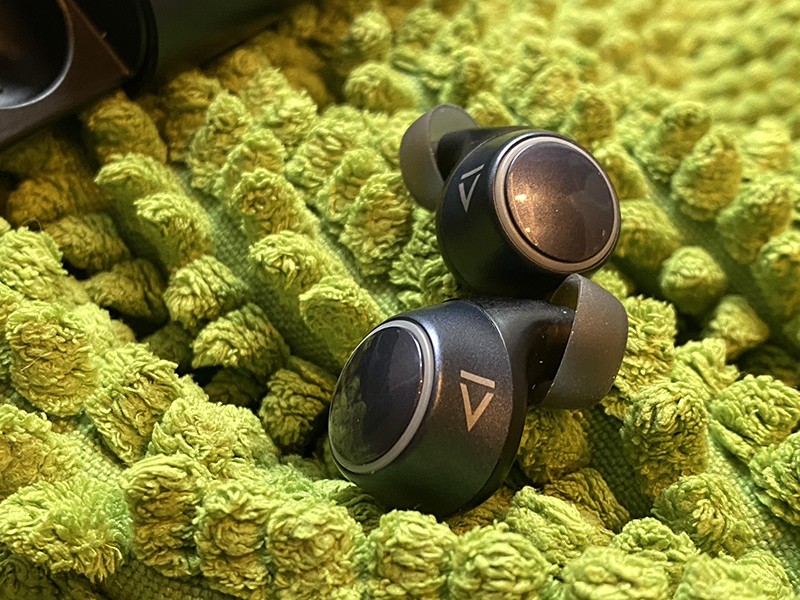 Based on a first blind test, the Outlier Air V2 performs very well, producing a suitably balanced rendition of John Mayer’s New Light complete with clear highs and mids, but with maybe just a tad too much bass for my personal preference. But I suppose that’s just how today’s pop songs are tuned.

Without the bass as a distraction on a lighter and airier tune like Ed Sheeran’s Afterglow, the earbuds performed admirably enough but started to show its limitations. You can hear Sheeran’s voice struggling to stand on their own feet as the vocal harmony and guitar strumming gradually amped up their attack. Things started to fall apart as the song reaches its climax, and it became too muddy to be enjoyable.

When listening to the same song on a more expensive pair of earbuds like the Sennheiser Momentum True Wireless 2, for instance, there’s a marked difference. The song came through with a lot more balance and detail, with none of the cacophonies I experienced with the Outlier Air V2. To be fair, they’re in a completely different price range, but it’s a useful comparison to make so we know the limitations of the latter.

Using the right-sized tips definitely helps with the overall listening experience, as the earbuds could completely block out all noise indoors even without active noise cancellation. The only thing that leaked through were loud renovation noises next door and my dog barking at the food deliveryman. Of course, being outdoors is a different story, but they do work well enough. 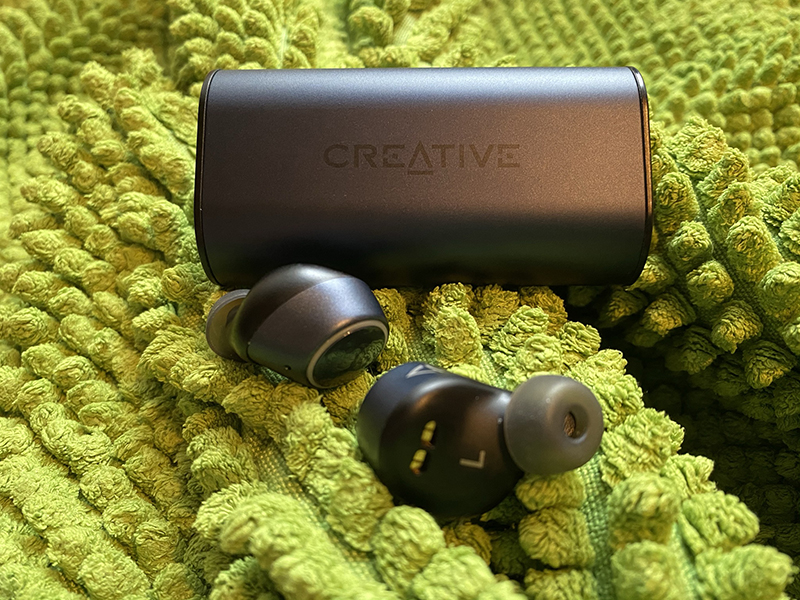 With the Outlier Air V2, Creative has returned with an upgraded model that retained the features that worked, and improved on what didn’t. It also packs in several nifty features to call its own such as the Super X-Fi support (which, again, only works on offline audio files stored on your phone), a unique slide-out case design (though a bit on the large side), and excellent battery life.

However, a couple of missing features hold it back from being a flagship killer. The lack of active noise cancellation is one (though that's asking for the sky at this price point), and so is the missing companion app. It's also not very adept at handling complex audio pieces and is better suited to the mainstream pop music genre.

Nonetheless, the most attractive feature on offer is its price tag: for just S$119, you get a pair of truly wireless earbuds with solid performance and sound quality that is supported by one of the most recognized audio brands in the world. That means proper after-sales warranty, service, and support.

What's even better than an attractive official retail price? An even better retail offer price, of course. The Creative Outlier Air V2 is actually going for just S$99, at all of Creative's official retail touchpoints. So, if you’re in the market for a pair of good true wireless earbuds and only have the budget for one around S$100, the Outlier Air V2 is easily the one to get.

It's available at all Creative authorized retailers and you can grab it online at their very own Creative Store.