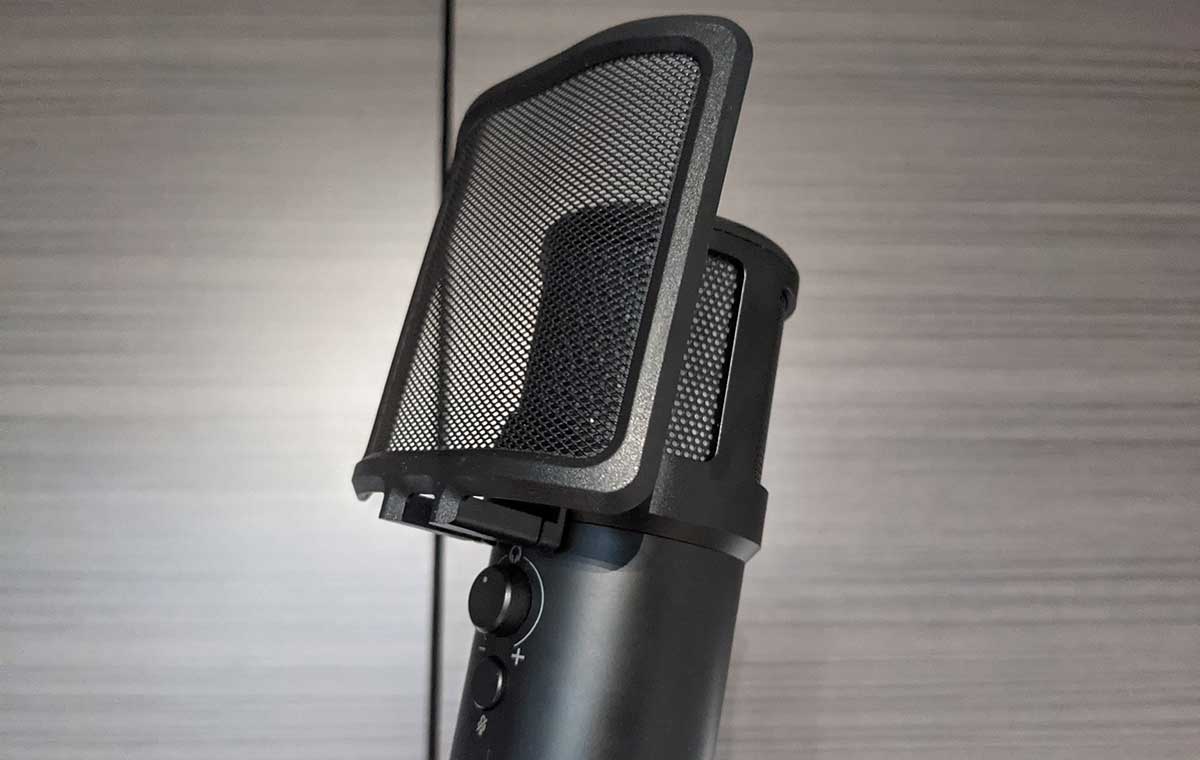 Creative Technology is no stranger to sound-based products to enhance the PC experience, and it's even dipped its toes into microphones before, like the one included with the Sound Blaster R3 recording kit. So it’s only natural that they would begin expanding into the world of USB microphones (or USB microphones under S$100, at least). The Creative Live! Mic M3 is Creative’s entry into that space, and the company says it’s an all-rounder in terms of its audience, reaching out to the regular worker as a conferencing microphone, and to the aspiring streamer.

The earliest Creative’s ‘Live!’ products I could find were launched in 2009, and the brand has usually centered around webcam solutions, like the Live! Cam Socialize HD 1080 of 2010. Other products have since held the Live! name, such as the Aurvana Live! and Live! 2 headphones, and more recently the Live! Cam Sync and Sync V2 1080p webcams have been great options for an affordable and capable communication tool in the period of work from home scenarios.

Though Creative doesn’t specifically state what the Live! brand stands for, the product range gives it the impression that it's meant to broadcast you 'live' on the internet, so it makes sense to have their first, widely-accessible standalone USB microphone carry that kind of brand name. 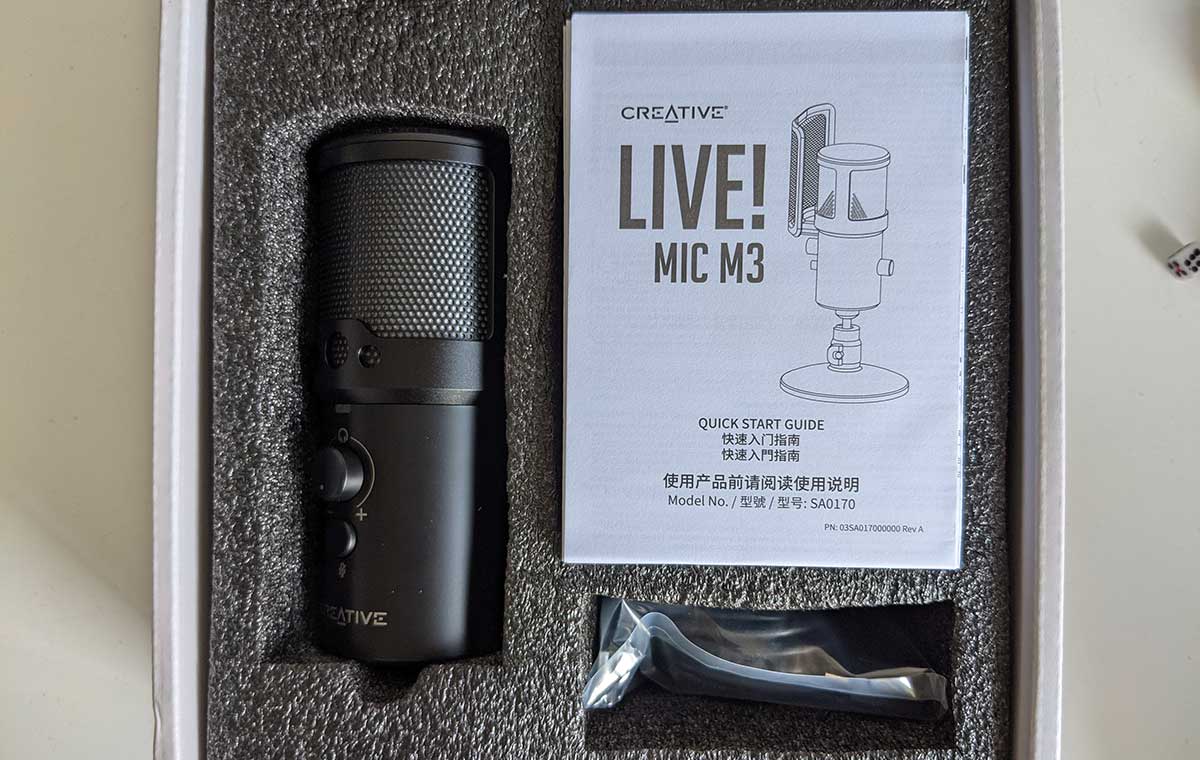 Inside the box, you get a 1.5-meter USB-A to micro-USB cable, a quick start guide, components for assembling a desk stand and a nifty magnetic pop filter. The first thing that struck me while unboxing it was how heavy the included base of the desk stand was; you could actually hurt someone with that thing if you tried. This is a good trait (not for hurting people) for the stability of your microphone; you wouldn't want the microphone to wobble and lose its sweet spot at the slightest jarring of your table.

As for the build of the microphone module itself, it's rather light and feathery in comparison. Though they’re both made of plastic, it was only the microphone that felt that way. This leads to a very strange weight distribution when you've assembled the desk stand: It's incredibly bottom-heavy. Along with the non-slip pad underneath the stand base, it'll take some considerable force to knock this thing down. Taking advantage of the heavy base, the desk stand allows the microphone module to tilt back or forward with a total sweep of 90 degrees, while allowing 360 degrees of rotation for precise angling and placement of the microphone.

The Mic M3 also uses a 1/4-20 UNC thread, so it shares compatibility with tripods if you want another desk stand or mounting solution, though 3/8-inch microphone arms are out.

As for the pop filter, it won't be coming off on its own. But even though the magnet is adequately strong, the pop filter still wobbles in place a little bit. It also doesn't help that the entire top half of the microphone is magnetic, so aligning the pop filter to where it's supposed to be might take a few attempts. 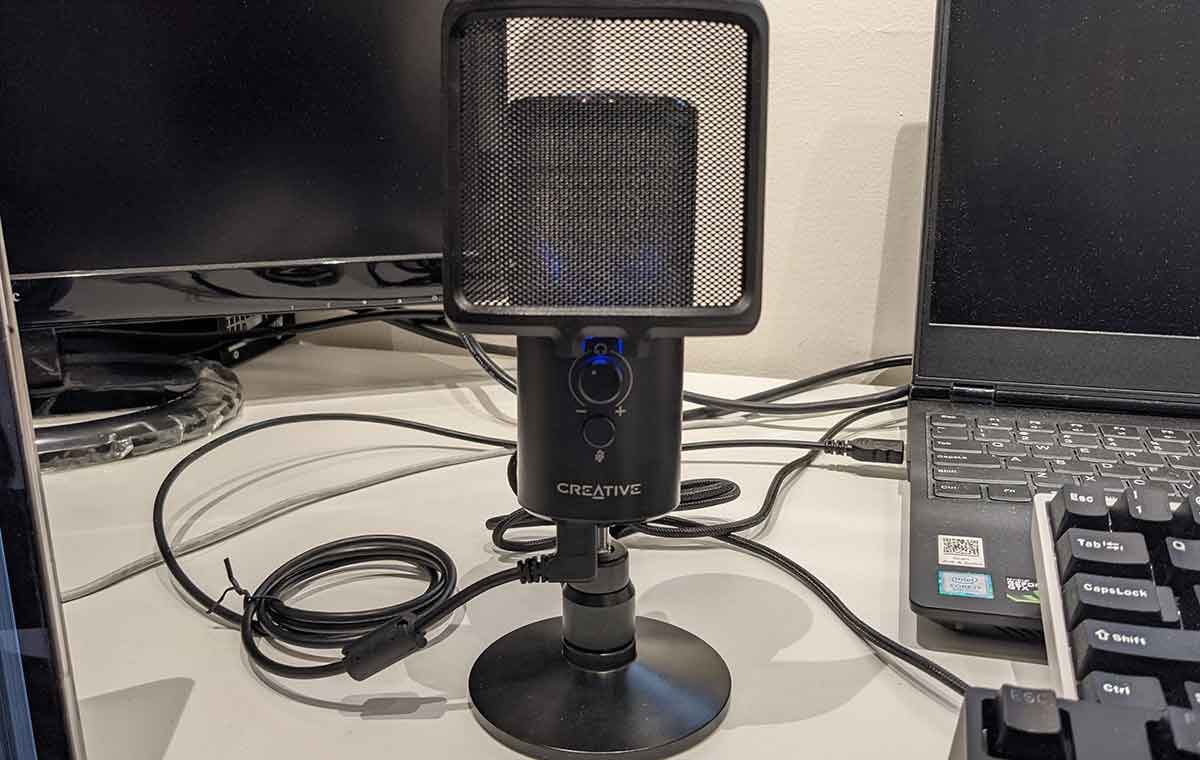 You’re gonna need the pop filter by the way, though not for a reason you might expect; the Mic M3 has a mute indicator LED at the front that shines blue and red, and without the pop filter the LED beams full-force into your eyes, especially in a dark room.

As for how it looks as a whole, if you have an all-black setup this will fit in nicely, as there aren't any particularly ostentatious details on the microphone if your eyes can ignore the LED. There are some small little details that break the illusion of luxury, though, like the aforementioned wobbly pop filter, and the micro-USB port located on the front rather than being tucked away at the back. The latter aspect can irk some people as it's not an elegant or clean look with the cable jutting out from the front (see photo above). 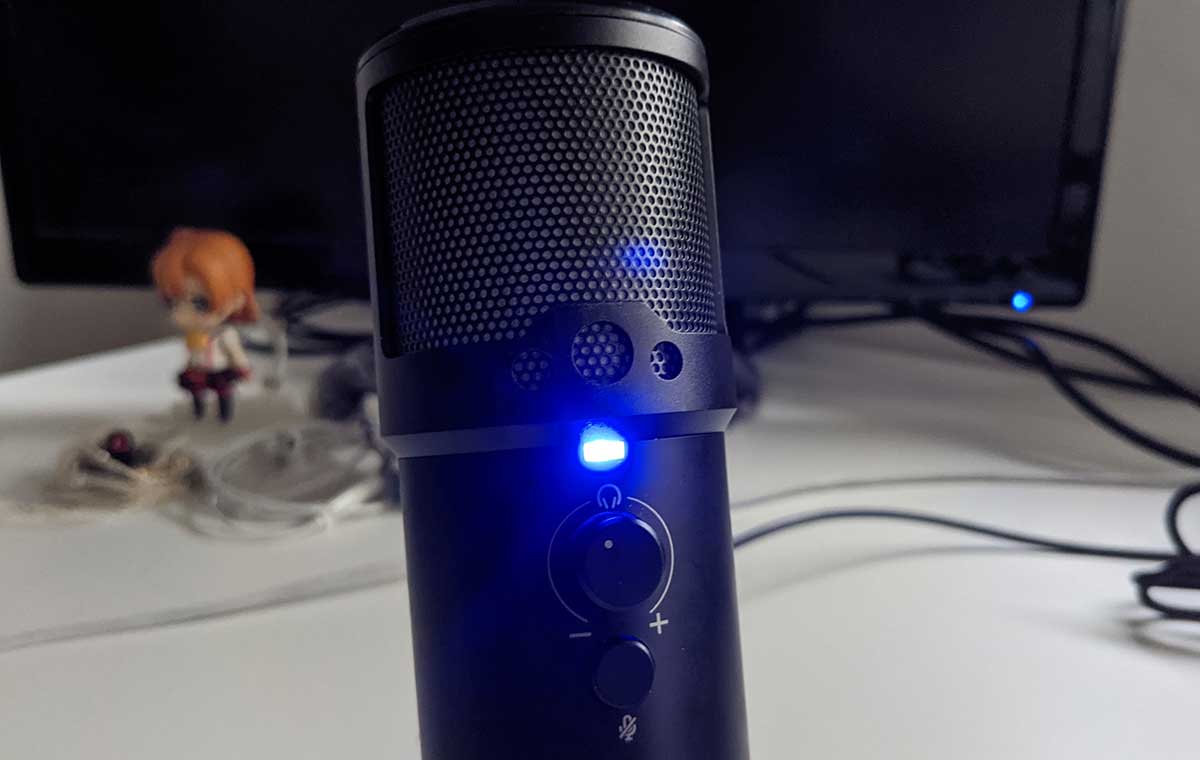 Moving onto the Mic M3’s set of features, being a USB microphone, it truly is plug-and-play, with no setup or driver downloads required. On the front, the Mic M3 has a mute button, which was so convenient that it quickly replaced my existing mute hotkey on Discord. I imagine this effect is amplified in other calling software where the mute button isn’t mappable like Zoom and Google Meet, especially since there’s no standardised mute button across these services. The LED changes from blue to red when the mute is on and as can you can expect, the visual cue is very handy.

Also on the front is a volume dial. My initial expectation was that it could change input volume, though disappointingly it only affects headphone monitoring volume. Speaking of which, the Mic M3 allows for live headphone monitoring through a 3.5mm headphone jack at the bottom. Though I never needed it, there's zero latency between the microphone and the headphone jack, and I could hear my voice being captured in real-time. The knob is however not easy to manipulate single handed as I've found in my usage, but if you generally use the same software for recording, you probably don't really have to be concerned about managing this beyond the initial setup.

On the back is a knob that changes the Mic M3’s polar pattern. The default on the left is a cardioid pattern, which is designed to reduce sounds coming from the back and sides, such that sounds coming from the front are the main focal point. On the right of the knob is the omnidirectional pattern, which is designed to pick up sounds from all directions. 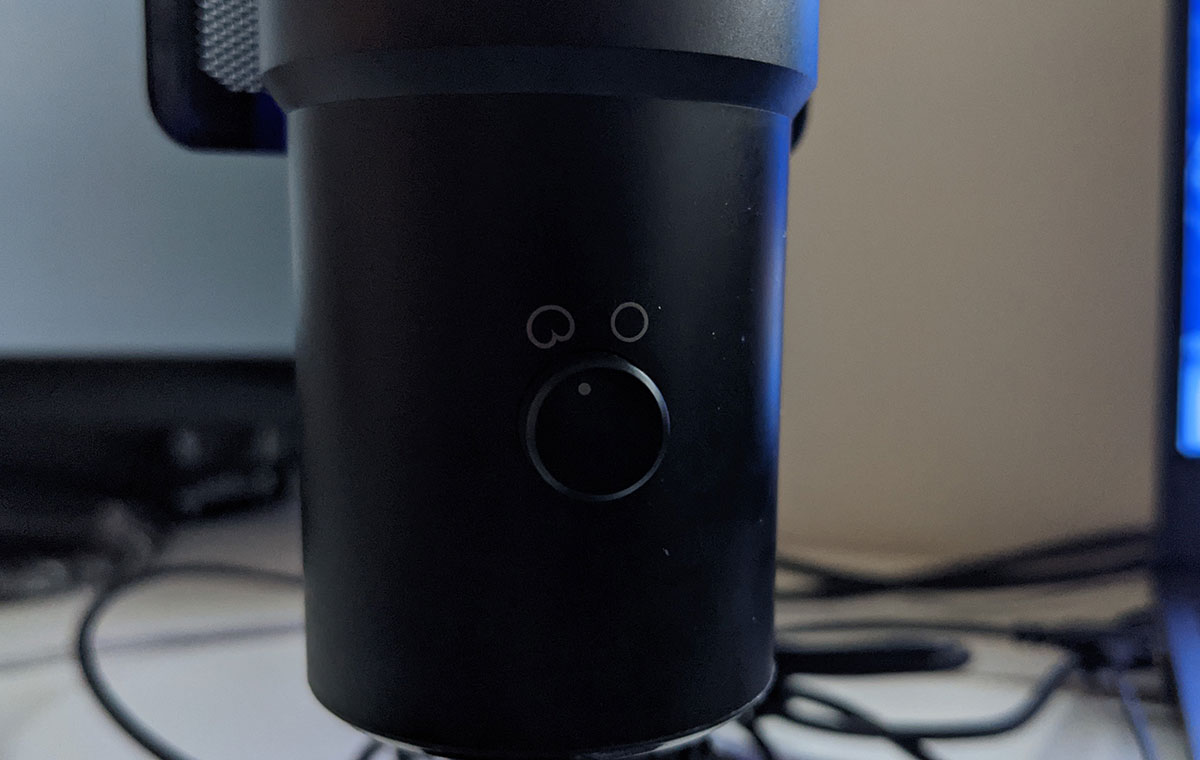 In practice, I've never needed to switch to omnidirectional, though that might be what you want to give it a go if you're using it as a lone microphone for some sort of roundtable podcast or you need to capture what's happening in the background just as much as the foreground. As such, the tests comparisons below were conducted in cardioid mode as that's the mode you'll likely be using most of the time when the main purpose is to capture your voice. In comparison with cardioid, though, omnidirectional mode had a bit more reverb picked up, as it's more sensitive to noises from all directions. If you have it against the wall, the back of the microphone may pick up more of your voice bouncing off of it than it would in cardioid mode.

It's difficult to describe sound quality in words, but compared to an integrated laptop microphone, it scores a few points. Putting the Creative Live! Mic M3 against an integrated microphone on a 2017 MacBook Pro, audio on the Mic M3 sounds a bit more precise as the low-end is filtered a bit; the box rates the Mic M3's frequency response at 50Hz-18kHz. The MacBook's microphone also picks up a bit more undesired ambient noises, whereas the Mic M3 does a better job rejecting them.

Laptop mic quality isn't uniform, however. For example, when testing against a Lenovo Y530 notebook, the Mic M3 is much better than the compressed bitrate-sounding audio that the Lenovo picks up, and is much more suited for recording scenarios. It's worth noting though that compared to both laptop microphones, the Mic M3 is softer out of the box, so you might want to push the microphone's gain up in your computer/respective software settings. Overall, however, you get some sound improvements plus the features of the Mic M3.

Stepping up the comparison, let's pit it against something closer to its price range, like the Seiren Mini from Razer, which retails for S$79.90. This comparison turned out to be a little tougher; although the Seiren Mini has a wider frequency response of 20Hz-20kHz, the low-end is less bloated than on the MacBook's microphone, as if the lows were reduced rather than completely filtered as observed earlier. 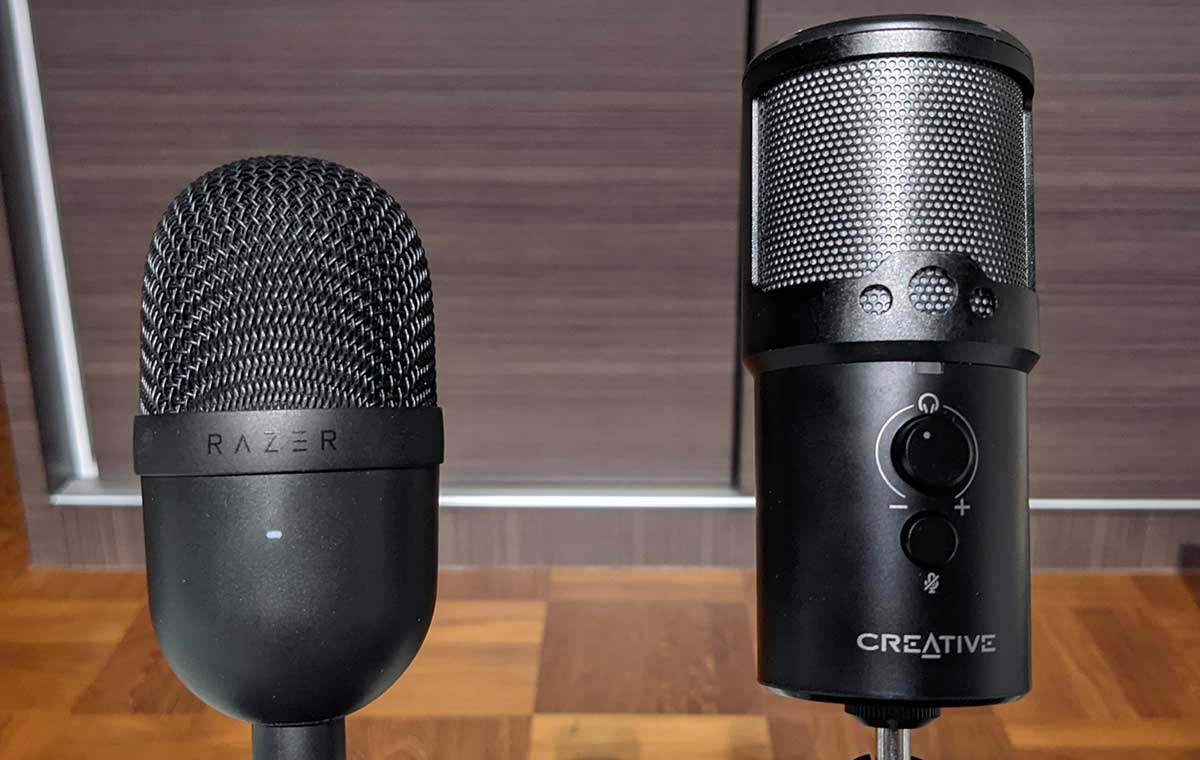 The Seiren Mini has a supercardioid pattern as opposed to a standard cardioid pattern (such as that  used on Mic M3), which rejects more sounds coming from the sides but is more sensitive to sounds on the back of the microphone. This leads to a narrower pickup angle on the front of the microphone which gives the Seiren Mini a more dampened sound signature that's captured (some might say tighter sounding) than on the Mic M3, as the latter captures more reverb coming from the sides of the room.

In this case, though, you might also want to consider the features of the Mic M3. The Seiren Mini is rather bare on the outside, sporting nothing more than an LED that tells you when the microphone is on, and the micro-USB port on the back (to its credit, though, it's better than being on the front).

In comparison, the Mic M3 has headphone monitoring with a volume dial, a mute button, and greater flexibility with two polar patterns, for S$10 more.

And ultimately, sound quality will come down to how you treat your recording space; it'll still be really noisy if you have a fan blowing at you constantly (like I do) or live next to MRT train tracks/near a busy road. The difference that would matter then wouldn't be how it picks up your voice but how it picks up ambient noise (or how it rejects them). To that end, you're probably better off in the long term investing in some sound dampening materials, which would make a much greater difference than the noise rejection on either of these microphones. Let's not forget the presence of machine-learning and AI-assisted solutions to remove noise such as NVIDIA's Broadcast that does a much better job when you need this degree of control, but it's only applicable if you own one of those GeForce RTX series of graphics cards. 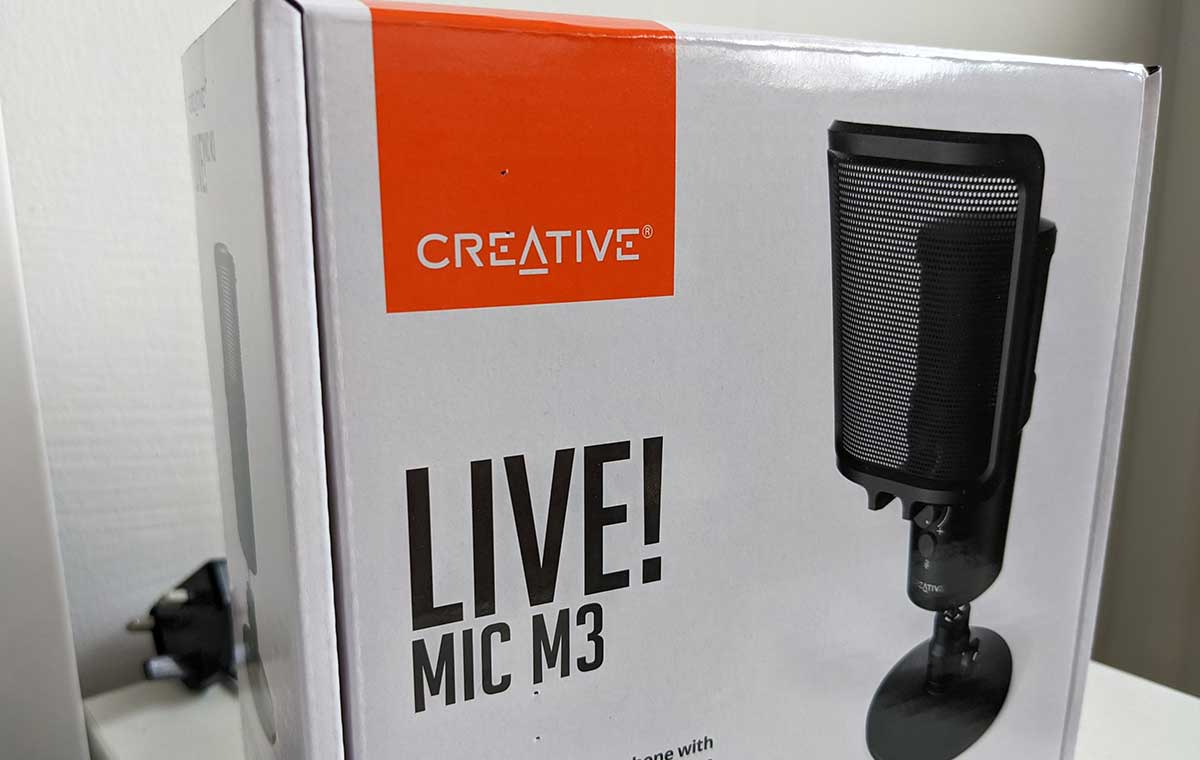 Generally speaking, the Creative Live! Mic M3 works nicely. Though its sound quality competes heavily with other USB microphones at this price range, it's a step up from most laptop microphones, and has a bunch of features to back it up, from the convenience of having a mute button, to the ability to monitor audio in real-time should you need it. Though the build also leaves a bit to be desired, at its price point, it's a good starter USB microphone should you decide to start streaming and recording, or to make your voice clearer in online meetings.

The Live! Mic M3 is available on Creative's website for S$89, and given its feature set, you may want to keep it in consideration when looking for USB microphones in this price bracket.

Write a Review
Compare This | Specifications
Easy set-up: Just plug it in, no drivers
Magnetic pop filter and heavy desk stand
Good amount of tilt and rotate adjustability on its stand
Sounds better than standard laptop mics and is on par with other standalone mics
The mute button is handy, and dual polar patterns provide flexibility for recording
Affordable
The build for the microphone module itself is somewhat cheap
Front-facing USB port is bad for cable management
Slightly wobbly magnetic pop filter
Knobs require more force to manipulate
Volume knob only adjusts headphone monitoring volume, not input gain
Our articles may contain affiliate links. If you buy through these links, we may earn a small commission.
Sponsored Links