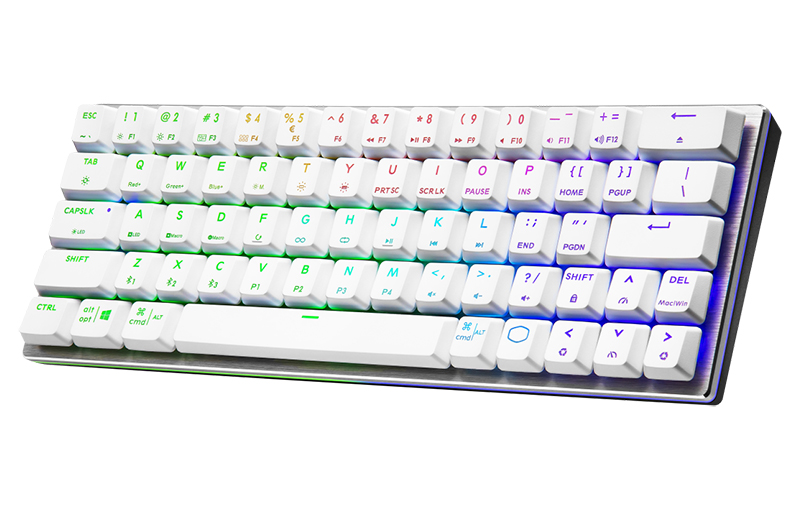 The Cooler Master SK622 is a compact 60% keyboard that is surprisingly versatile. Its low-profile design gives it a sleek and modern look, and it features a brushed aluminum top plate and floating keys. At just 446g, it is light and very portable, easily stowed away in a bag. For such a small keyboard, it comes with a rich complement of features, with hybrid support for both Bluetooth 4.0 and wired mode, as well as compatibility with both Windows and Mac.

I'm not a fan of the brushed metal look however, and I think the keyboard would look a lot better without its shiny chamfered edges. The chassis is a mix of aluminum and plastic, and there is unfortunately some slight flexing when twisting the body. You won't notice this while typing, but it would be nice if the keyboard was a little more robustly built. 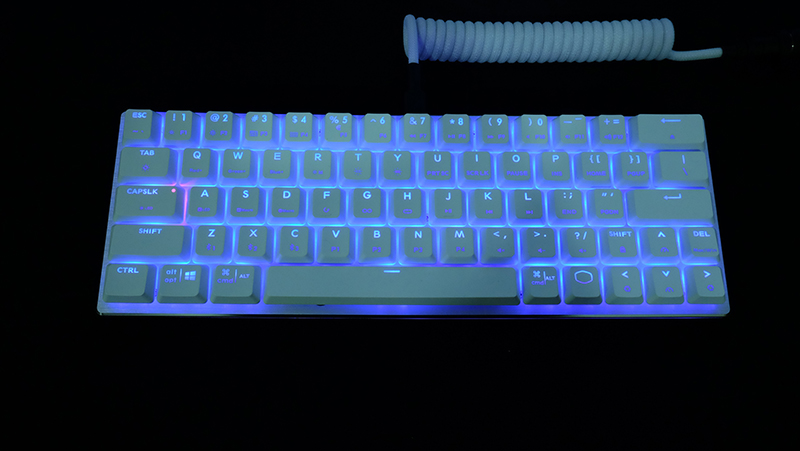 One of the more unique aspects of the keyboard is its low-profile design, complete with low-profile mechanical RGB switches. What this means is that both the travel and actuation distances have been reduce to 3.2mm and 1.2mm respectively, although they're still rated for 50 million actuations. You can pick between linear Red, clicky Blue, and tactile Brown switches – my review unit came with the Red switches.

If you're used to regular Cherry MX-style switches, the shorter travel distance is quite noticeable and takes some getting used to. The typing experience is not as satisfying and some of the larger keys that use stabilizers, particularly the space bar, have a hollow-sounding feel to them. 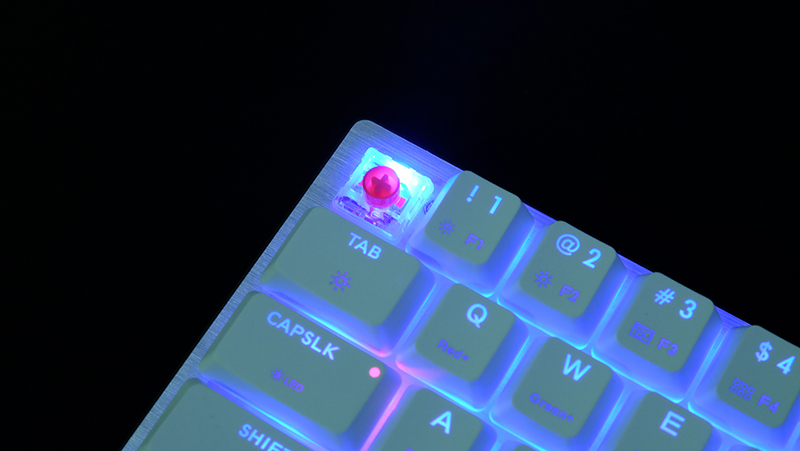 These aren't deal-breakers by any means, but the SK622 may not be for you if you're looking for that deep, satisfying "thock" sound. That aside, key wobble is pretty minimal, which is a big positive.

The keycaps are ABS plastic however, so they'll eventually pick up shine over the long haul. This could potentially be an issue as the SK622 utilises a non-standard layout. There are some bonuses to this, such as the fact that it's managed to include arrow keys in a 60% layout, which resolves one of the biggest gripes people have with 60% keyboards. However, this comes at the expense of the right Shift key, which has been shrunk down to a mere 1U size. If you're used to holding down the right Shift key to enter a question mark, this might throw you off a little and the tiny Shift key is quite awkward to hit.

On top of that, the non-standard bottom row means that looking for a replacement set of third-party keycaps will be tough when the ABS caps inevitably start to shine. 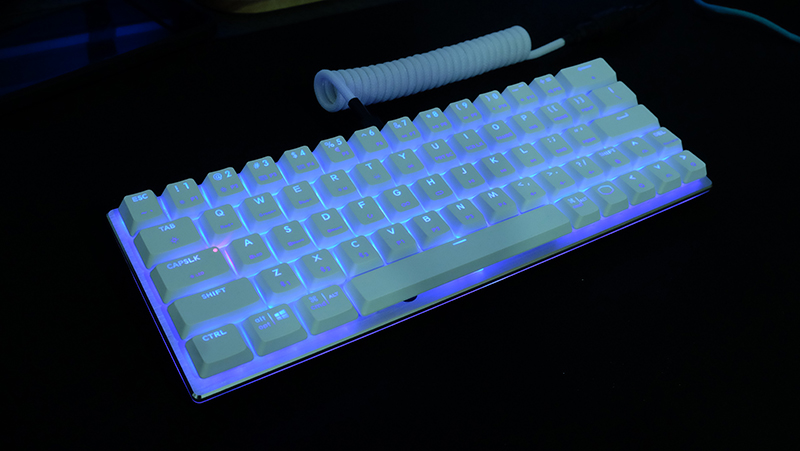 The SK622 is also designed for rather flexible usage. You can choose to plug in the USB-C connector or use it in Bluetooth mode, with support for pairing with up to three devices. A switch on the left toggles on Bluetooth mode, but you'll probably want to stick to wired mode for gaming for the most responsive experience. Elsewhere, the keyboard can switch between Windows and Mac modes with the press of a key. All you have to do is hold down Fn + Del.

Much of the keyboard's customisations can be done on the keyboard itself, without software. This includes cycling through the different colours and modes and adjusting the colour levels for red, green or blue. However, you can still download the MasterPlus+ software if you wish for access to deeper customisations, where you can set the effects on a per-key basis. 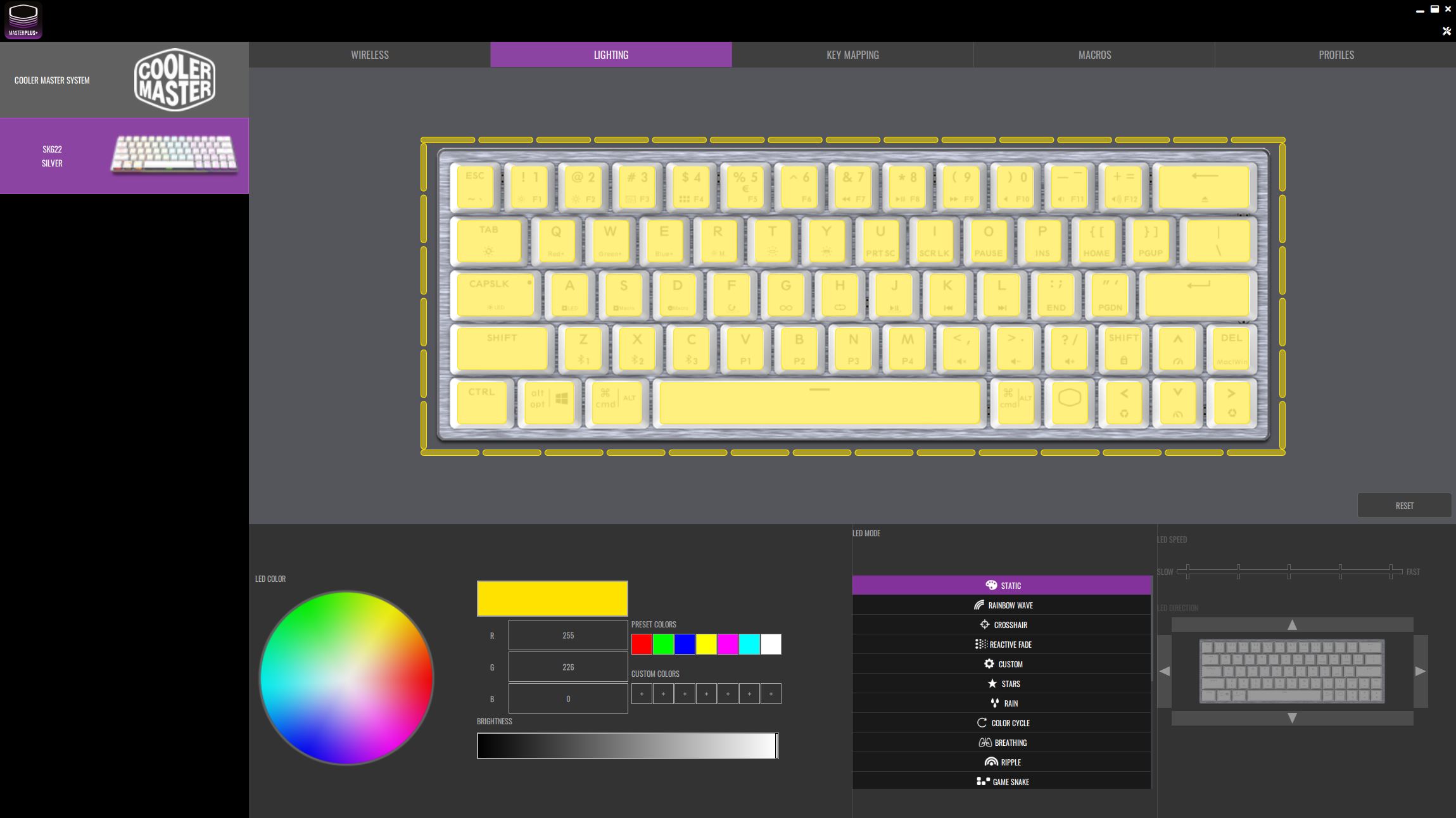 The keyboard does suffer from some issues with uneven backlighting, and the upper legends on each keycap are noticeably brighter than the lower ones. This appears to be somewhat mitigated by the differing thickness of the legends – the lower ones are mostly narrower, so the difference in brightness is less glaring. 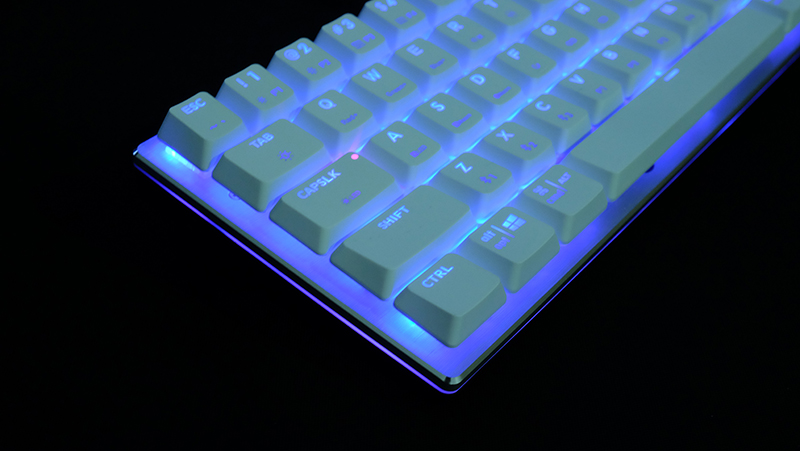 At $169, the Cooler Master SK622 is pretty reasonably priced for what it offers. It has packed a full range of features into a 60% form factor, including arrow keys. It works well as a permanent fixture on your desk, but its slim profile, light weight, and detachable cord mean that it is easily packed away for transport too. The support for both wired modes and Bluetooth lets you pick whatever suits you best – for instance, you could unplug it for work on the go and plug it back in at home. Finally, it works with both Windows and Mac devices, so it's truly quite a versatile tool. While the low-profile switches and non-standard layout may not endear it toward enthusiasts, it's a decent pick for less fussy users looking for an adaptable, multi-purpose board.

You can find it on Lazada and Amazon.sg.

Write a Review
Compare This | Specifications
Manages to include arrow keys in a 60% form factor
Slim profile makes it easy to transport
Flexible operation with both wired and Bluetooth 4.0
Supports both Windows and Mac
Reasonably priced
RGB backlighting is uneven
Non-standard layout limits support for third-party keycaps
Tiny, 1U right Shift takes some getting used to
Our articles may contain affiliate links. If you buy through these links, we may earn a small commission.
Sponsored Links