A performance premium keyboard without the frills

Over the years, Cooler Master (and its CM Storm offshoot brand) has released a stream of premium keyboards targeting the hardcore gamer or keyboard enthusiast. Whether you're a gamer or just somebody who has to have the very best, Cooler Master products have consistently ranked near the top of the heap. The company's latest keyboard offering is the NovaTouch TKL, a premium keyboard that comes with an interesting twist - hybrid capacitive key switches (also known as Topre switches) that are also compatible with Cherry MX keys! We'll touch more on the keys and the switches later, but first let's establish what you can expect from the NovaTouch TKL. 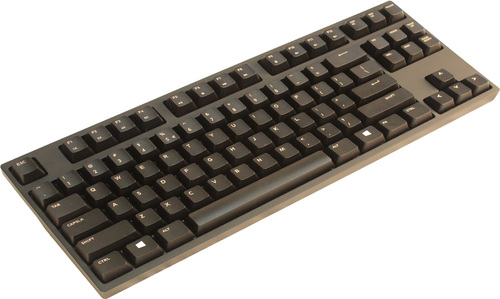 The NovaTouch TKL is hefty, weighing in at nearly a kilogram (895g to be precise). The weight gives the keyboard a solid, sturdy feel, and  the rubber stops underneath it, coupled with the sturdy legs means it won’t slip and slide off a table (at least not without taking the table with it). Apart from the regular stands underneath the keyboard, it's almost featureless save for a mini-USB port that’s used to interface with the computing device. Connection is established via a provided mini-USB braided cable with gold plated connectors and contacts. To test compatibility, we've used the keyboard on both the Playstation 4 and Xbox One consoles and on PCs and notebooks. It performed well on all of them, although the Xbox One initially had trouble detecting it.

Like most Cooler Master designs (barring radical exceptions like the Mech or Devastator series), the NovaTouch TKL looks like a normal keyboard although it's thicker and stockier. With the exception of the missing numeric keypad (also referred to as "ten key", hence the "ten key less" name which is "TKL" in short), every other expected function of a generic keyboard is replicated on the NovaTouch. An added feature with the NovaTouch are the shortcut keys (mapped to the F1 to F12 keys), which are activated by hitting the FN key near the right side CTRL key. 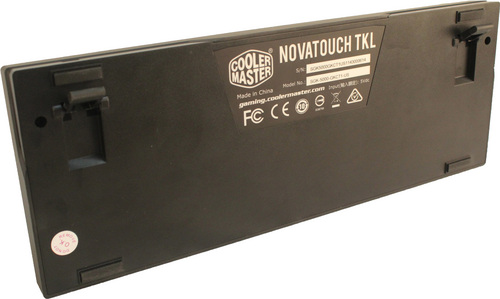 Underneath, the keyboard uses Topre key switches. Although not a exactly a true mechanical key switch like the familiar Cherry MX type (for further reading reference on this topic, read this), Topre switches differ in that are sometimes classified as "semi-mechanical" as they sport both a rubber dome and use metal springs over a capacitive sheet. As quoted from Wiki link, these are the characteristics of a typical Topre switch:-

The switch action is very smooth, with a tactile bump that you can feel near the top of the stroke. After the bump, the resistance is almost flat, making it difficult to avoid bottoming out. You can not feel the mid-stroke actuation point. It bottoms out distinctly with a "thock" sound.

Indeed from our use, we concur that the Topre switch used offers smoother key presses and faster response times than the usual Cherry MX ones. Now what makes the NovaTouch TKL even more interesting (and a stand-out in some sense) is that its keys are hybrid - it uses Topre switches but has a MX compatible stem to allow you to custom fit Cherry keys that you may favor more than the standard keycaps. 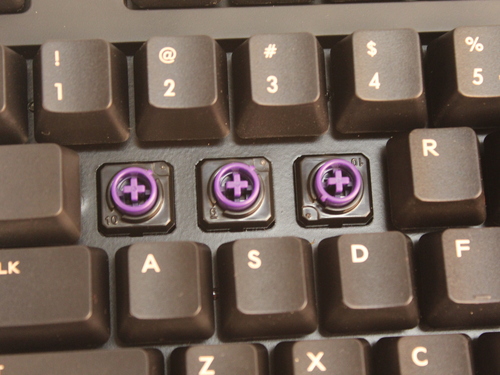 Unfortunately, the NovaTouch TKL doesn’t come with spare keys (some glow-in-the-dark ones would be nice, especially since there’s no backlighting on this keyboard), but you do get a bag of O-ring sound dampeners. Usage of these dampeners are optional, but they are meant to be used under the keys to muffle the sound made as the keys bottom out. In our use, it barely made any audible difference, as the default configuration of the keyboard was already pretty quiet (when compared to regular keyboards) on its own. 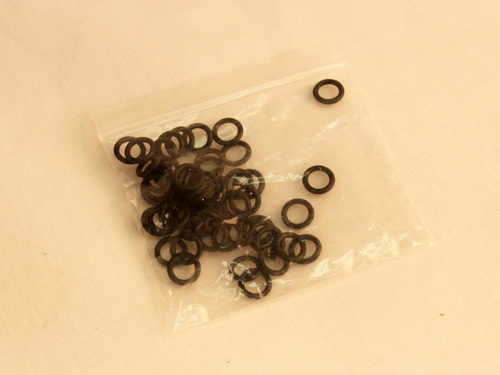 Still, if you want to use them, installation is a breeze. Simply pull out (with the included tool) the keys you want to muffle and insert the tiny dampeners under them. Place the keys back into place and you're done! Just make sure you don't pull out every key at once (like we did). We had a 'ball of a time' figuring what keys go where. 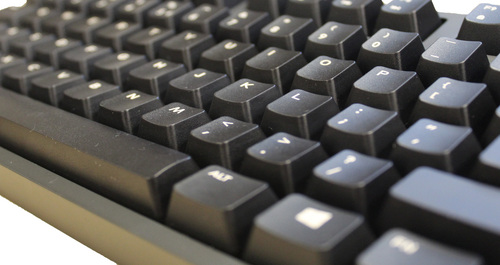 While killing zombies, we used the game to also measure button response since the NovaTouch supposedly requires less pressure to register key presses. The result (with us constantly keeping in mind to only gently tap the keys) was that we DID type faster. But we soon forgot that a light touch was all the NovaTouch required and returned to hammering the keys home. So yes, the NovaTouch performs just like it's marketed, but we're too hardwired by normal keyboards to utilize it optimally. It also has N-Key Rollover capability, meaning each key is registered independently. That's great because it reads all your presses, even if you pressed a series of keys simultaneously. So in Typing of the Dead, or in real typing, if you made a mistake, it really is your fault instead of the keyboard's. Not that you'd mind much as typing on the NovaTouch is extremely satisfying. You don't get the spongy feeling from the keys of regular keyboards. Instead, the keys feel much smoother and more responsive.

Despite the overall quality of the NovaTouch, we still found ourselves lamenting some issues.

The lack of a keypad is disappointing as our hands keep hitting empty air since we're used to using normal keypads to enter in numbers while using the keyboard for non gaming tasks. While we understand this is a TKL keyboard, it’s still jarring. we'd like to point out that we don't blame Cooler Master for this as it's a design choice but perhaps they would consider an expansion option like a keypad plug-in sold separately to better adapt the keyboard for a wider group of people. 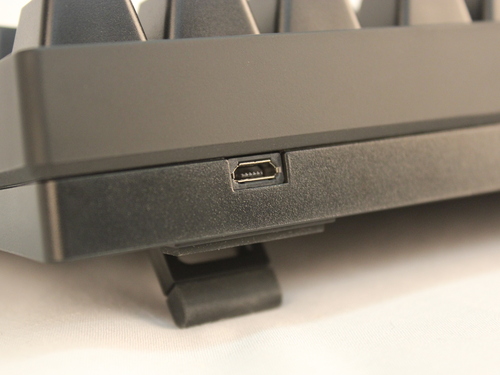 While our previous concern can be overlooked, the omission of a backlight (which the cheaper QuickFire Rapid-i has) is something that we feel strongly about. For a premium keyboard, the lack of one is quite unforgivable when it adds to the functional use. No serious gamer would be caught gaming in bright light and it's a norm to use minimal to no lights while playing games (although it's also clinically proven that it's stressful on your eyes). Personally, as guys who regularly game and write in the dark, a backlight enabled keyboard is an absolute must. If not backlighted, then we expect some sort of glow-in-the-dark keys that highlight the important keys. But neither is to be found here, meaning you have to buy your own.

The final issue we have is the FN key. A staple key in most laptops, the FN key usually executes functions exclusive to the hardware it’s connected to. In the case of the NovaTouch, it allows the user to initiate rapid presses by just hitting a button once (sort of like the old school Turbo buttons on controllers) and access media functions. The functionality is not the problem. but accessibility is. As a right-handed user, the placement of the button (near the right CTRL key) is problematic. You either lift your hand off your mouse to use it or move your left hand. Both are awkward. On a side note, there are no macro or programmable keys. If you’re somebody who loves your shortcuts, you might want to take note of that limitation. 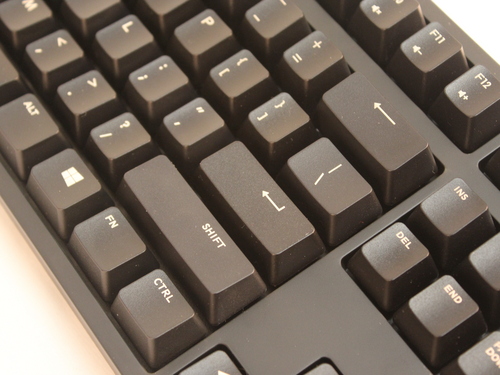 While we do like the Cooler Master NovaTouch TKL a great deal, we still think that it could be better. For the price it's selling at, the NovaTouch seems to be a bit underwhelming in features. The hybrid capacitive switches are nice and we really hope more keyboards will offer this in the future, but that's still nowhere near enough to make up for its shortcomings, which is sharply due its price point where you expect more than just basics.

Again, we highlight the issue of the missing number pad. We've acknowledged that it was a design choice to nix this, but we also feel that it alienates some users who want what the NovaTouch offers but is put off by the missing numpad. After all, if this is solely for gaming it's understandable, but the NovaTouch is a generalist enthusiast keyboard. As such, it's reasonable to expect it to be used for typing as much as for gaming (if not more) and in that regard, the missing numpad (and the lack of an option to get one as an add-on) is baffling. Almost as baffling is the lack backlighting for the keys. We're not really demanding options for color customization or anything of that sort, but just simple backlighting to highlight the keys under low light use or complete darkness would have extended the keyboard's appeal.

Despite all that, all our issues are secondary, and the undisputed fact remains that the NovaTouch TKL is a quality keyboard, which is to be expected given that it's being sold at S$289. It does what it sets out to do very well but the secondary issues do add up and detract from the experience. In the end, that's ultimately what makes the NovaTouch TKL one of the better premium keyboards on sale, but not the best.