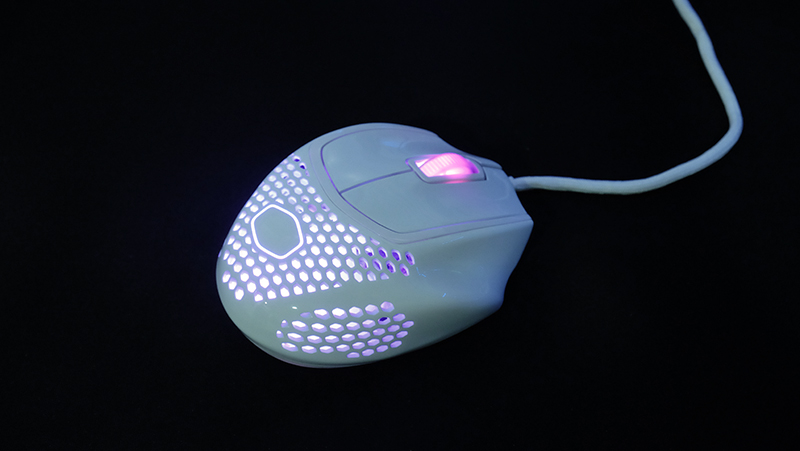 The spiritual successor to the Spawn and Xornet

Despite what its name may suggest, the Cooler Master MM720 is not in fact the successor to the Cooler Master MM710 (or the RGB version MM711). Its shape is modelled after the classic Spawn and Xornet, updating their ergonomic, right-handed designs with a modern, lightweight shell. While many lightweight mice today generally sport safer, ambidextrous shapes, the MM720 stands out from the crowd by catering unabashedly to claw grip gamers. If you want a mouse that will let you comfortably rest your ring finger and pinky, this should be right up your alley.

It weighs just 49g, making it one of the lightest gaming mice you can get today. As on the MM710, the perforations in the shell are in the shape of the Cooler Master logo, and they're actually on the smaller side compared to most other honeycomb mice. You can get the mouse in four different colours and finishes, including white and black in both glossy and matte. My review unit is the glossy white model, which looks striking in person, but is unfortunately something of a grease magnet. Glossy surfaces are better for dry hands however, so you can pick whichever suits you best. Build quality is decent, but there is some slight flexing when pushing in on the bottom of the mouse, although it's nothing to be worried about.

The MM720 is a wide and flat mouse, perfect for the claw grip. If you have small hands like I do, you can palm it very comfortably as well. With comfort grooves on the left edge for your thumb and ledges on the right for your ring finger and pinky, your hand ends up in a super relaxed position. However, depending on your personal preferences, the shape may not be the best for the most precise aim. I find I aim better with ambidextrous mice with narrow grip widths, and the MM720 is the exact opposite of that. Because of its ergonomic grip, it's extremely wide, and it took quite some getting used to for me.

Having said that, mouse shape is down to a matter of personal preference, and while the MM720's shape doesn't really work for me as I prefer narrow mice for their more precise handling, it could very well be a great fit for you. The mouse comes with large PTFE mouse feet, including a ring around the sensor. They glide smoothly with no issues, even though they don't appear to have rounded edges from the look of them. Cooler Master has included a pair of replacement skates in the box in case you need to swap them out. In addition, you get a set of rubberised grip tape in the box too, but Cooler Master hasn't colour-matched them with the mouse, and they are still black. This makes for a slightly odd look when applied, which may or may not be to everyone's liking. I'm also not too enamoured with the feel of the grip tape. It has a vaguely sticky feel to it, even though it's not actually sticky, and I think the problem may be that the tape actually has a bit too much grip to it. I much prefer the grip tape that was included on the HyperX Pulsefire Haste. That aside, Cooler Master has crammed plenty of modern tech into the mouse. The left- and right-click buttons feature LK optical switches, which are able to drastically reduce the debounce time because of the elimination of metal contacts. As with Razer, Cooler Master is claiming much quicker actuation times, although you'd be hard-pressed to notice any difference in game. Nevertheless, optical switches do still have certain advantages over traditional mechanical switches. For one, they rely on light to register a switch press instead of metal contacts, which means they're less susceptible to mechanical wear and tear and dreaded double-clicking issues.

The clicks are light, crisp and responsive – they feel very good to use overall. However, the right-click button on my unit appears to have more post-travel than the left-click button, so there could have been greater consistency here. The side buttons are nice and springy, but they travel quite deep into the mouse, which may be annoying to some folks. Finally, the scroll wheel offers clear notches with just enough tactility, but it can be a bit noisy when scrolling quickly.

The cable is the same flexible paracord-style cable we've come to expect from top mice today, and it's super flexible and supple, with next to no cable drag.

RGB lighting on the mouse takes the form of internal LEDs that light up the insides of the mouse. The scroll wheel is illuminated too, and both can be customised independently using Cooler Master's MasterPlus+ software. The software offers a wide range of adjustments too, including the ability to set the double-click speed, button response time, angle snapping, and lift-off distance. Cooler Master has included a best-in-class sensor on the mouse too in the form of the 16,000DPI PMW3389 optical sensor. As expected, tracking is flawless, and I noticed zero issues. You can set up to seven DPI stages in the MasterPlus+ software, but if that's too many, you can simply uncheck the ones you don't need. The driver software even lets you monitor things like your CPU and GPU temperature and usage, which is something you don't see on mice software every day. At S$99, the Cooler Master MM720 is a little bit more expensive than most mice in this class. It tries to justify that with a solid feature set, optical switches, and powerful software, but whether or not you like it will ultimately come down to how you feel about its shape. It's difficult to fault the MM720 in any way – it's super light, is available in both glossy and matte finishes, has a top-tier sensor, and comes with replacement feet and grip tape. But its wide, ergonomic shape is not for everyone. If you liked the old Spawn and Xornet, you'll love the MM720. If not, I'd recommend finding a way to test one out in the store before shelling out for it.

For those interested, you can get the Cooler Master MM720 at major electronics stores or simply head over to the brand's official e-stores on Lazada and Shopee.

Write a Review
Compare This | Specifications
Available in both glossy and matte finishes
Super lightweight design, optical switches and top-tier optical sensor
Flexible paracord-style cable
Powerful and easy software customisations
Ergonomic shape is not for everyone
A bit too much post-travel on side buttons
Grip tape doesn't feel nice
Our articles may contain affiliate links. If you buy through these links, we may earn a small commission.
Sponsored Links