Garmin's new satellite device lets you text anywhere, even with no mobile coverage

Cooler Master MM710 gaming mouse review: One of the best mice of 2019

Cooler Master MM710 gaming mouse review: One of the best mice of 2019 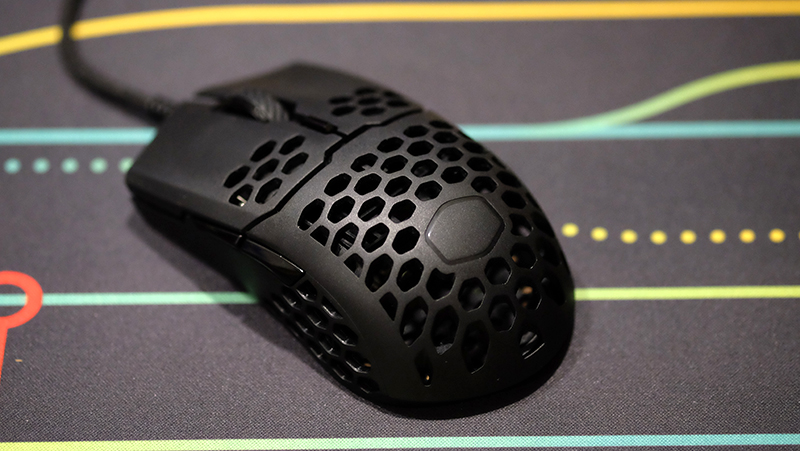 I really hope holes don't bother you, because here we are with yet another holey, ultralight mouse (fun fact: the holes are in the shape of the Cooler Master logo). The Cooler Master MM710 first debuted at Computex earlier this year, but we had to wait till September for it to launch. Well, I think it was worth the wait, because the MM710 may just be one of the best mice to come out in 2019, sitting right up there with the Glorious Model O.

The MM710 has many of the trappings of a great mouse for FPS players. It is super light, weighing a mere 53g, and has a small-ish, comfortable shape and a flawless optical sensor. And given that mouse manufacturers are now finally paying attention to their cables and trying to make them as soft and supple as possible, the MM710 also comes with its own flexible "Ultraweave" cable that has near zero drag.

Better still is the price. At S$99, the MM710 is pretty affordable, especially when you compare it to rivals like the Finalmouse Ultralight 2, which costs US$120. To be sure, it isn't insanely cheap and costs the same as the Model O, but it's a perfectly reasonable asking price in the current market.

Made for claw grippers

The MM710 is a small mouse and it's made out of plastic to keep weight down. It measures just 116.6 x 62.6 x 38.3mm and flares out toward the back for a slightly wider rump. As a result, it feels a little wider in hand than I'm used to, but it's short enough so that's not much of a problem. Compared to a lot of mice out there, this is a rather short mouse with a prominent hump, which means it's almost a no-go for palm grippers with larger hands. My hands measure 16.5cm from the base of my palm to my fingertip, so I'm still able to palm the mouse. However, the shape of the mouse still seems more suited for the claw grip, so it definitely won't be the best fit for everybody. 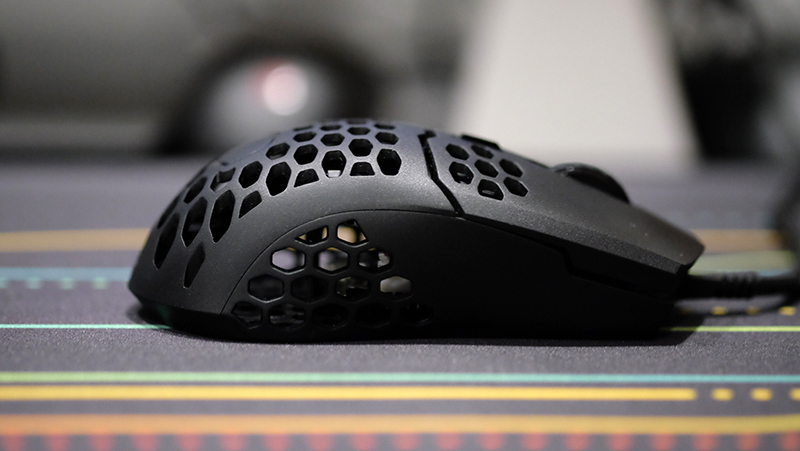 It's great for wrist aiming though, and its short body and light weight makes it really easy to make small adjustments to your aim using just your wrist. 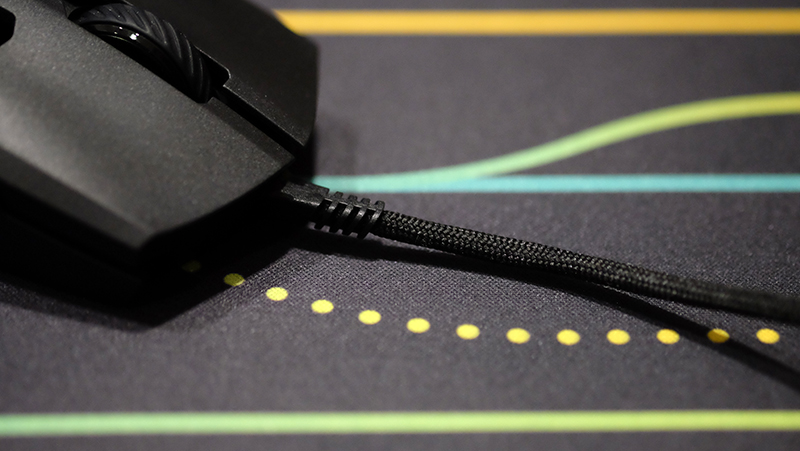 This is basically a MasterMouse S with holes and other improvements, such as a more centralised sensor, and I think Cooler Master has taken a mouse with a great shape and turned it into an entirely new beast. For one, the MasterMouse S had a terrible cable which was notoriously stiff, but the cable on the MM710 is on the other end of the spectrum entirely with a supremely flexible and supple feel. The sleeving also looks neater and tighter than on the Air58 Ninja and Model O, both of which have cables that seem to puff out in random areas. 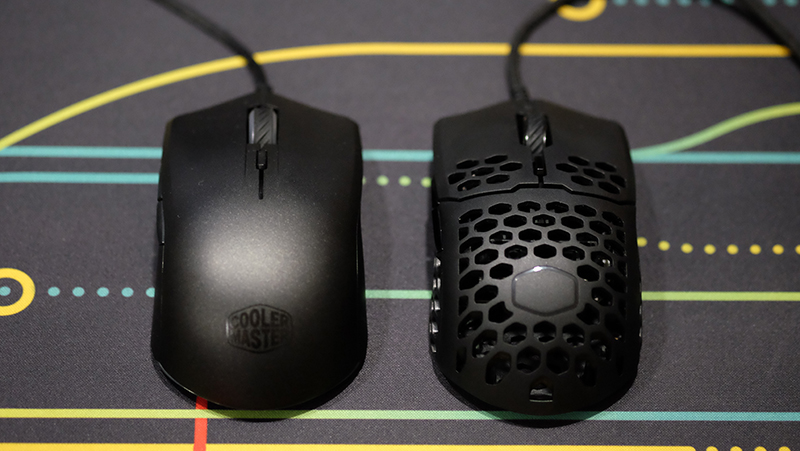 It's also ditched any form of RGB lighting to bring the weight down. However, if you really must have some lights, Cooler Master is also releasing an RGB version of the mouse, the MM711, in October. Of course, it'll weigh slightly more, but that's the price you pay for additional features.

Once again, I can't stress enough how much of a difference the 53g weight makes. You probably can get away with a mouse that weighs closer to 100g in less demanding single-player titles, but when it comes to twitch reaction shooters that require rapid flicks and precise tracking, the lighter mouse is noticeably less fatiguing after long hours. Even something like the Zowie S2, which isn't even that heavy at 82g, feels almost like a brick in comparison. 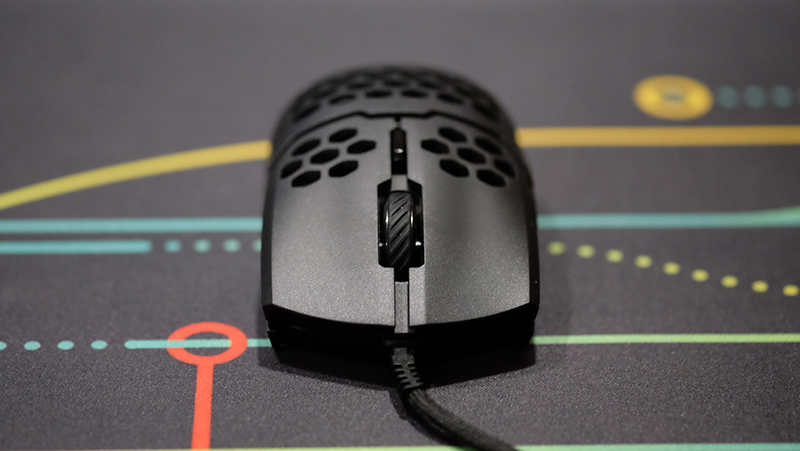 It's almost funny to see how the pendulum has swung. The MasterMouse S actually had a weight inside it that weighed around 13g. This was not a configurable weight and was just a metal piece screwed on to the top shell to convey the impression of heft, because people tend to associate weight with quality. In 2019, the idea of that is laughable, and I'm glad that Cooler Master has redeemed itself wonderfully with the MM710.

The sensor inside the mouse is a 16,000DPI PixArt PMW3389 optical sensor, which is a top-notch sensor with no known acceleration or prediction. Tracking was flawless, as expected, which is pretty much the norm on all top gaming mice today. In fact, if you're in the market for a gaming mouse, it now makes much more sense to pay more attention to the shape than the sensor.

However, one area that could use improvement is the stock mouse feet. Cooler Master says these are pure PTFE, but I'm still interested in swapping them out for third-party feet from Hyperglide or Corepad to see how the mouse handles with better feet. There's some scratchiness out of the box, probably due to the fact that they don't have rounded edges. Things improve quite a bit after breaking them in though, and they end up being quite usable. The feet also ship with a thin, nearly invisible plastic covering to protect them, so remember to remove that first. 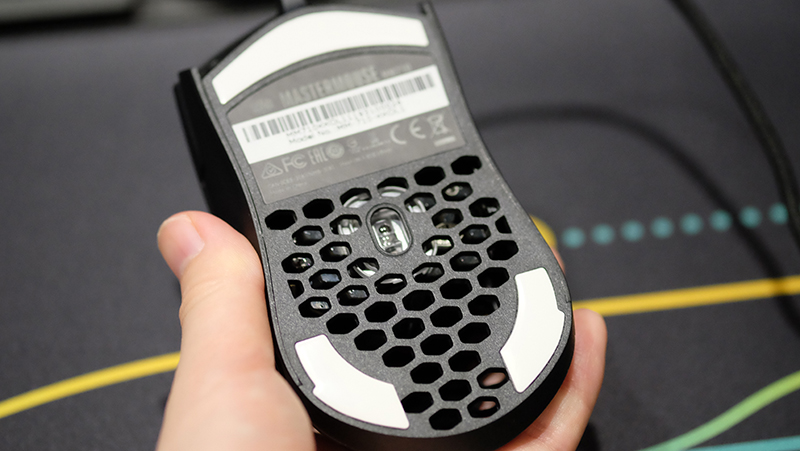 The mouse will work with CoolerMaster's MasterPlus+ software, which will let you remap the buttons, set your DPI stages, and set up macros and custom profiles. However, the software hasn't dropped yet at the time of writing, so I haven't gotten the chance to try it out.

One of the concerns with a design like the MM710's is build quality. So far, it seems like most of the ultralight mice have managed this quite well, and the MM710 is no different. I'm not able to notice any flexing when pushing on the top or sides of the mouse, and it feels quite robust in hand despite the holey shell. The left and right mouse buttons are also separate from the main body, which is better from a durability standpoint since the entire shell doesn't have to flex every time you click.

You'll also have noticed the holes on the left and right buttons. But don't worry, they're located low down enough so they don't interfere with using the buttons. 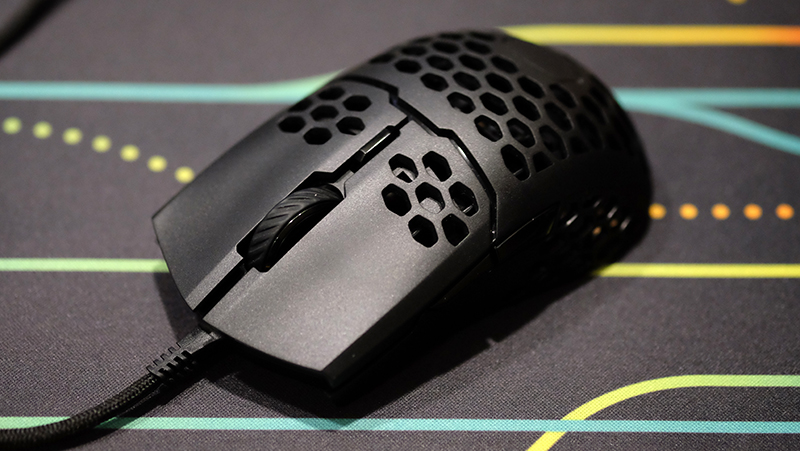 You're also probably worried about liquid or dust getting into the mouse. While it seems like it'd be easy enough to clean out the internals with an air blower, Cooler Master says that its PCB is also splash- and dust-proof. I haven't had the mouse for long enough to really test that out, but it's interesting to see that the company clearly took measures to try to mitigate the risks of having that many holes in the mouse shell.

That said, I've seen some reviewers complain about build quality issues, such as wobbling left and right mouse buttons and rattling in the mouse. My review unit seems free from such issues though, so it may be possible that there's some variance at play here. I can't speak for the units others have received, but for my mouse at least, there's no rattle when shaking the mouse or tapping it on the table. The mouse buttons don't seem excessively wobbly either, and I have no complaints.

The same goes for the mouse wheel. While some others have taken issue with the noisy wheel, the wheel on my unit is actually remarkably silent. It doesn't even budge much when you try to push it from side to side, and the individual steps are well-defined. 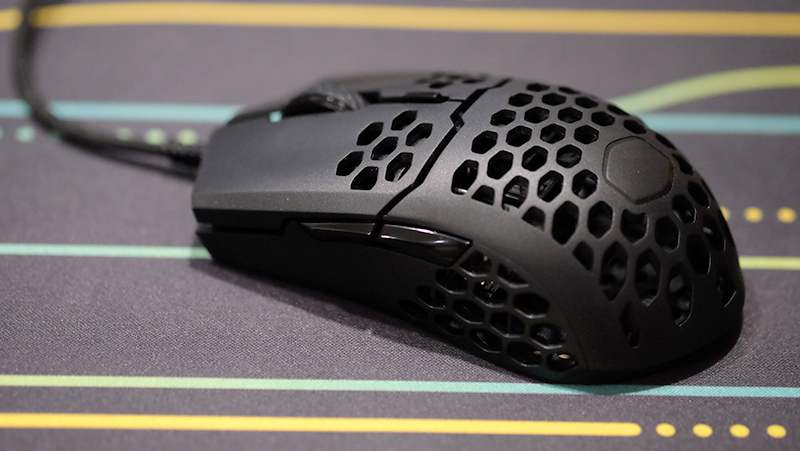 The MM710 uses Omron switches, which are rated for 20 million clicks. The left and right mouse buttons have just the right amount of feedback, and the side buttons feel pretty crisp as well. There's a narrow DPI toggle button located below the scroll wheel – I'd have preferred it on the bottom since there's less chance of accidentally hitting it, but it's narrow enough that that didn't actually happen to me.

The side and DPI toggle buttons are made of glossy black plastic, and it'd have been nice to have a uniform matte finish applied throughout. That said, the glossy black does look better, so I can see why Cooler Master went with that. 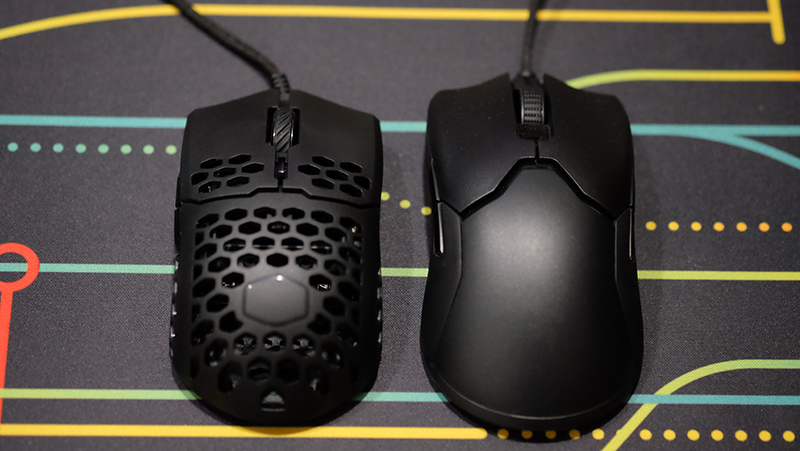 The Cooler Master MM710 is hands-down one of my favourite mice of 2019. It truly offers a winning combination, comprising a small, comfortable shape, extremely lightweight design, flexible cord, and a flawless sensor. The S$99 price tag just seals the deal for me.

Of course, at the end of the day, there's no such thing as a mouse that will make everyone happy. While I love the MM710, you may not, particularly if you have larger hands or just really hate having holes in your stuff. Who knows, you might even think 53g is too light.

But if you prefer smaller mice like me, it's really hard to do better than the MM710. Go get this mouse. It's as simple as that.

The mouse is available for pre-order till 10 September from Hachi.tech, GamePro and Endless Passion. It is expected to ship in late September.

Write a Review
Compare This | Specifications
Extremely lightweight design
Flawless optical sensor
Super flexible cable
Great value for money
Available in both matte and glossy finishes
Stock mice feet not the best
Perforated design may lead to dust buildup inside
Shape favours smaller hands and claw grip; may not be for everyone
Our articles may contain affiliate links. If you buy through these links, we may earn a small commission.
Sponsored Links