Captain Tsubasa: Rise of New Champions is a half-rare and half-well done steak

Good but not exactly great Sigh...if I've said it once, I've said it a million times - sports sims are NOT something I'm even remotely good at, and I'll bet you fifty metaphorical bucks I'd lose to the easiest A.I. in FIFA any day of the week.

And before you ask, no - it's not that I hate sports per se (badminton is fun), but rather that I have absolutely no idea what I'm doing in these games.

But what if it was anime-styled? Well, then you've got my attention, at least temporarily. Case in point, a PS4 copy of Captain Tsubasa: Rise of New Champions recently swung by for review, and if I had to say anything about it, I guess it was the first sports sim I didn't immediately want to drop after the first hour. 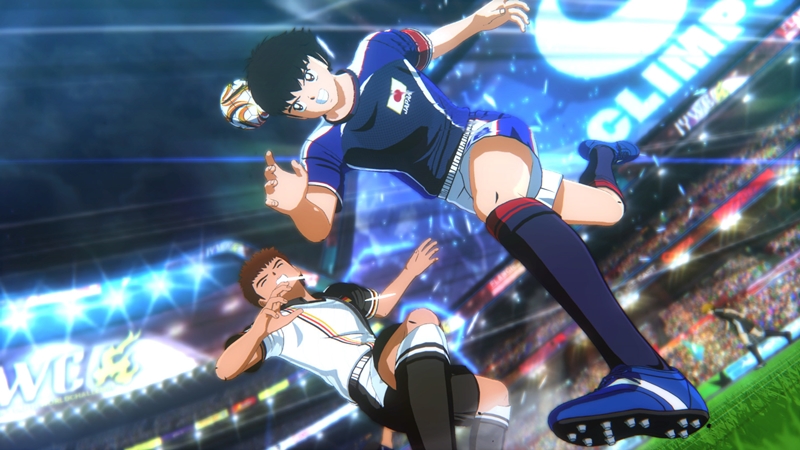 Not exactly. Because neither was it something I see myself getting completely hooked on.

When it comes to first impressions, Captain Tsubasa didn't really strike me as something that I'd fork out money for without a second thought (bar series loyalty, of course), and I still retain that sentiment now. Don't get me wrong, though - the game isn't bad at all, and I actually got quite interested in the narrative as I went along.

But the visual novel aspect is just half of the equation, and it's actually the other half - the soccer sim that leaves me a little unsatisfied. But there's no rush to hop onto the soccer pitch - we'll get into them one by one as we go along. For now, all you need to know is that developer TAMSOFT CORPORATION did one hell of a job with the game's aesthetics package.

Looking good for a 1980s series When it comes to how the game looks and sounds, there isn't much to nitpick on. For the most part, Captain Tsubasa is pretty nice to look at, and if you're already a fan of the series the nostalgia comes through clear as day in certain aspects.

The art style is one of them, and it's pretty much the same one fans have grown to love, with its well-defined linework and traditional large oval anime eyes. The developers have managed to toe a ridiculously thin line between authenticity and modernity, ensuring that players have a visual novel experience that's familiar and yet fresh on the eyes.

The audio isn't half bad either - the music and dialogues do a good job of setting the mood, be it during conversations or pre-match pep talks, to the point where you can sometimes taste the tension in the air, such as when Tsubasa's Nankatsu squad is about to go up against their rivals from Otomo.

Once upon a soccer anime So that's the aesthetic package done. Now let's talk about Captain Tsubasa's gameplay, which is actually kind of a mixed bag. It's split into two halves: visual novel and soccer sim. The visual novel bit is itself split into two separate campaigns, titled Episode: Tsubasa and Episode: New Hero. The former has you reliving Tsubasa and friends' journey through to Nationals from the original series, while the latter sees you playing as your own character on the world stage alongside various individuals from the main cast.

Episode: Tsubasa is the easier of the two and it's the one I played the most, as it introduces many of the key mechanics, like Dribble Moves, V-Zone and Spirit Gauge (the game's form of Stamina), alongside a hearty retelling of the series' most memorable events. It's one thing to know what happens during the course of the narrative from reading the manga, but it's another to watch it unfold in-game in front of you. 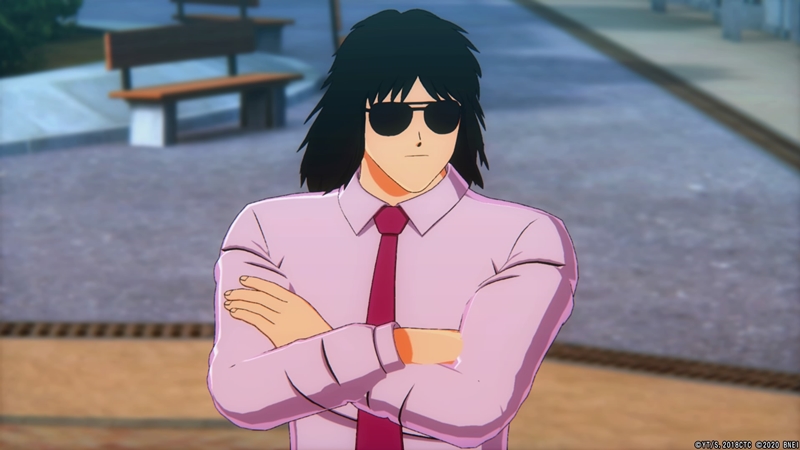 On that note, TAMSOFT has done an excellent job here, and between the comical moments of regular middle school life to the unbridled tension between the various soccer teams at Nationals, I confess that I found myself getting more and more interested as the story progressed, even though sports anime aren't usually my cup of tea.

However, it's not perfect - there were some moments where I found the exposition a bit excessive, and when you're already fired up to go kick ass on the soccer pitch, there's nothing more painful than having to trawl through more text for fear of missing out on important story details.

Time for the kick-off 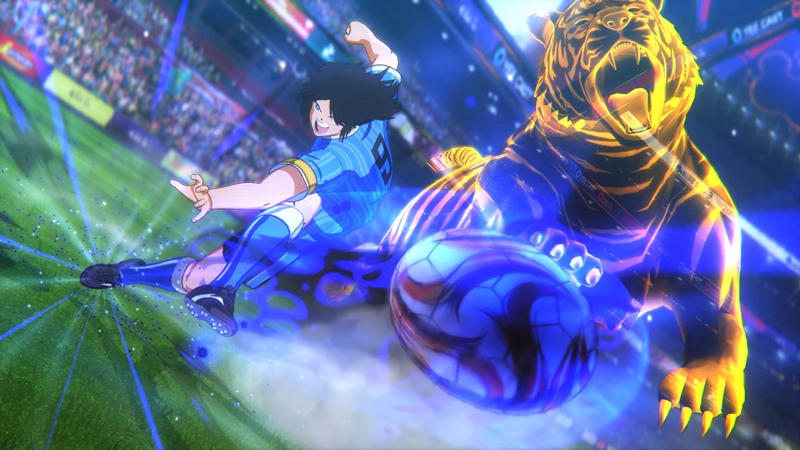 But what about the actual soccer sim? Well, let's just say that this is where Captain Tsubasa starts to get a teensy bit sloppy with its dribbling.

For starters, if you were to put aside all the ultra-cool special animations, such as Falcon Shots and what-have-you, playing through a full-length match here can feel rather linear after a few rounds, and it's not because I'm awful at the game, either. While most of the mechanics are the same as what you'd get in FIFA, like offsides, corner kicks and penalty shootouts, scoring goals is where things feel overly tedious.

In order to score in this game, you need to deplete the opposing goalie's Spirit Gauge by constantly hammering them with shot after shot. The best way to do this is by unleashing a barrage of special kick techniques when you get close enough, and I think it sucks that you can't actually score normally like you would in regular soccer sims. Which leads to the same fundamental game plan every single match - get close to the goal, unleash a special move, rinse and repeat until you actually score. 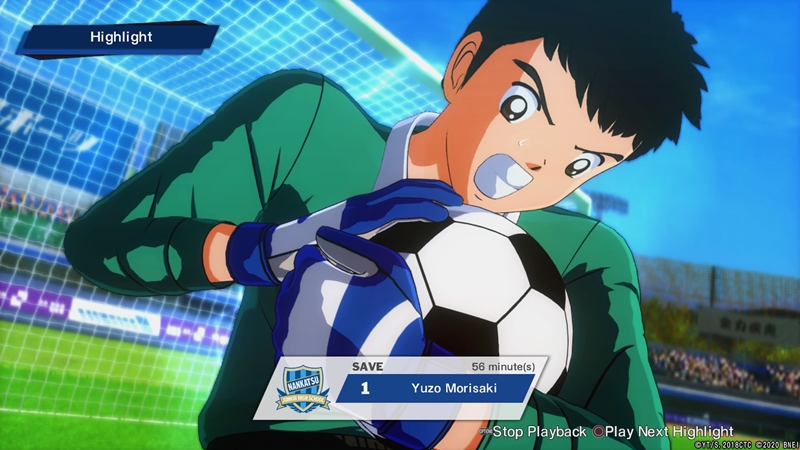 It can get downright painful at times, and it's not that difficult to repeat the process since there are no fouls in this game. You can literally hurl your opponent into the air with a tackle and the ref won't bat an eyelid. But while this toned-down emphasis on mechanical skill does make things somewhat easier for those who aren't that familiar with soccer rules and tactics (like me), it also means that more experienced players might not feel as rewarded for playing smartly.

To be fair, Captain Tsubasa does deserve some leeway when it comes to its more unrealistic aspects, since these flashy, often godlike interactions are what makes many sports anime, such as Kuroko no Basuke so entertaining to watch. But from an objective point of view the game doesn't actually offer much beyond that, and you're probably better off with a regular FIFA or PES game if you're looking to properly hone your skills. Top that off with player movement that feels a little too bricky for comfort (character movements can feel quite stilted outside of animations), and you have a gameplay package that's rather unfulfilling if you're in it for the soccer sim aspect.

It's a one-time thing 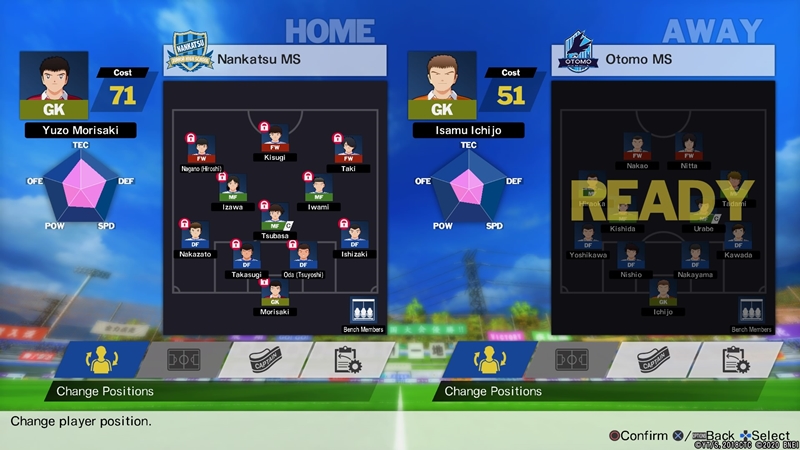 At the end of the day, Captain Tsubasa: Rise of New Champions suffers from the same problem as many other anime titles - it only truly appeals to those who are already familiar with the series. You can play and enjoy the story and all the fancy animations for a bit, but the game kind of plateaus from there, and it isn't that different from your average visual novel. As a soccer sim, it does have several glaring weaknesses that it tries to cover up using series loyalty and nostalgia, such as that unnecessarily tedious scoring process. Honestly, sometimes I'm just looking to win so I can progress through the story, and making that more difficult is basically the game shooting itself in the foot.

Still, I guess it's fine if you don't take your soccer that seriously in the first place and are just in it for the 1980s nostalgia bomb, but hey, fanservice is a given for any anime title, so it's not much of an excuse. Essentially, when you look at the objective side of things, the game relies heavily on its fancy animations and series loyalty to keep players engaged in the long term, and while some games are able to work with such an approach, this really isn't one of them. So, in a nutshell, this is a pie that's good when you have it fresh out of the oven, but loses a lot of its shine once you break through the fancy layer of crust.

Write a Review
Compare This | Specifications
Visual novel aspect is engaging and refreshing
Special skills and animations are visually appealing
Great music
No red cards
Feels overly tedious with regard to scoring goals
Doesn't offer much beyond story and series nostalgia
Characters can feel a little stilted and unwieldy during matches
No red cards
Our articles may contain affiliate links. If you buy through these links, we may earn a small commission.
Sponsored Links