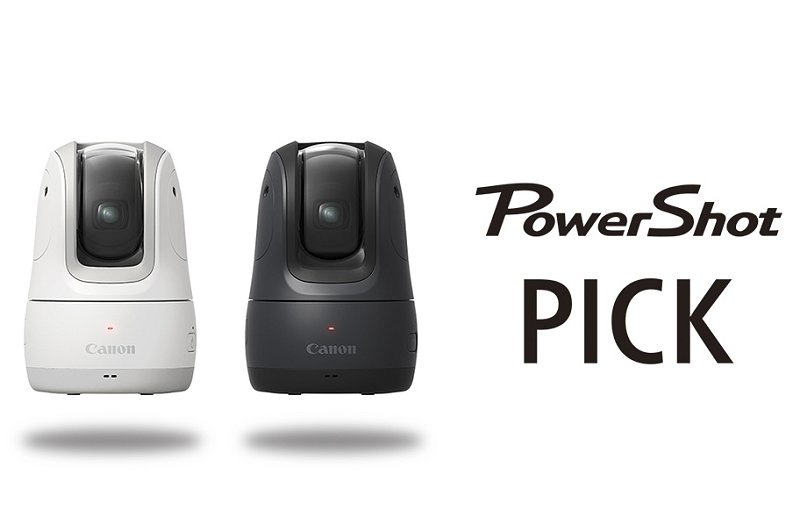 Right out of the gate, the Canon PowerShot PICK comes at a weird time. In an age where (at least in Singapore) large gatherings are still hard to organise given restrictions, there aren’t many opportunities for the PowerShot PICK to shine except for small social gatherings. With that out of the way, let's introduce it.

The Canon PowerShot PICK is a multi-use AI camera. The main use case that Canon advertises with this little unit is for capturing candid moments during something like a family outing or social gathering. But rather than just capturing random moments at different intervals, the PowerShot PICK uses an AI algorithm to detect when people in the frame are smiling in order to snap that shot, what Canon calls ‘Smile Tracking’.

If that sounds somewhat dystopian, you’re not alone. Canon AI smile tracking saw one of its earliest applications in its Chinese Canon Information Technology subsidiary, as a report from The Verge last year showed. Perhaps the silver lining here is that, with the PowerShot PICK, this technology is being used benevolently. We first reported about it in December 2021 and now that it's available, we managed to land some time with it to see if it lives up to its claims.

Getting the PICK to start up is pretty simple, though seeing it in action for the first time may be a bit jarring. Holding the power button for a second, the camera powers on with a little tweeting sound effect, and almost comes to life as the top module, along with the camera lens, moves to adjust itself. 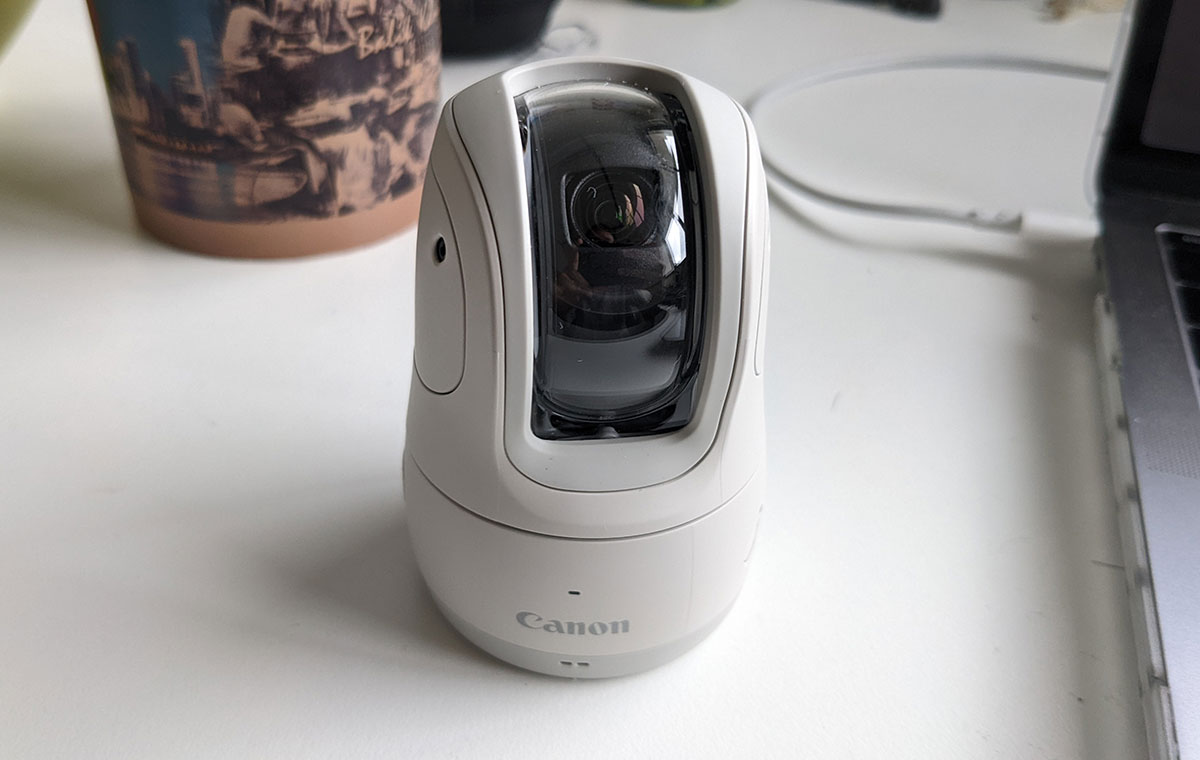 In terms of design, the first thing that struck out was how small it was. Sure enough, the PICK measures about 56 mm in diameter by 81.9 mm. But the next thought was how eerily similar it looked to a portable security camera, which is a bit unfortunate given its light-hearted purpose; in a social gathering, for example, someone might easily see it and ask why you have a surveillance camera pointed at the guests.

With the lens under the glass looking like a little eye, though, it’s not difficult to start personifying it. I'll admit, despite being a little creeped out about how it looks, its appearance grew on me. The beeps and tweets it emits also helps give it a little bit of personality. It reminds me of those social robots like the Jibo or the ASUS Zenbo.

My initial impressions aside, it is remarkable that Canon managed to fit a good number of physical features into such a compact machine. This includes a microSD card slot, a USB-C port for charging, as well as two microphones for voice commands, and finally a tripod mount at the bottom. Not bad for something that weighs 170g. 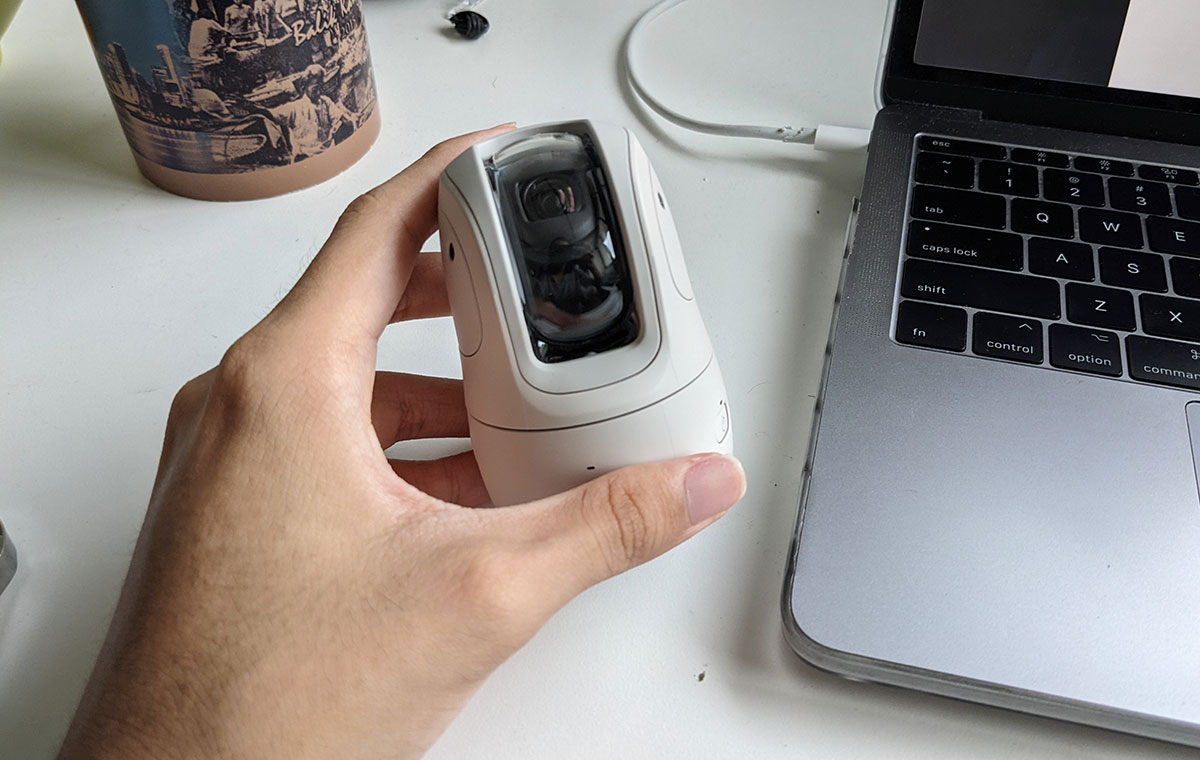 To complete the setup process, you'll have to install the companion Connect app for Mini PTZ Cam (a bit of a long name, but that's what it's called). Connecting to the app is pretty simple as well; hold the antenna icon button on the PICK while the app is open, and your phone will prompt you to connect with the camera.

Once you're connected with the PICK, you’ll see a homepage where you can store up to 12 registered profiles of people, as well as a series of recommended photos. You can't manually select a face in a photo and register that as a profile, however; the camera is supposed to automatically register a new face if the 12 profile limit hasn't been met, and only then can you put in information about that person. You're also able to prioritise different profiles, whom the PICK will take more pictures of.

Below that are the auto-shoot toggle, battery indicator and a little animated avatar of the PowerShot PICK, which will display little chat bubbles once in a while to add to that personality factor. You’ll also get the camera’s viewfinder in the app, though it only includes control for zoom, tracking, a button to re-orient the PICk to the front, and the shutter button. No manual controls for ISO, shutter speed or aperture to be found here (though tap to focus is still there). 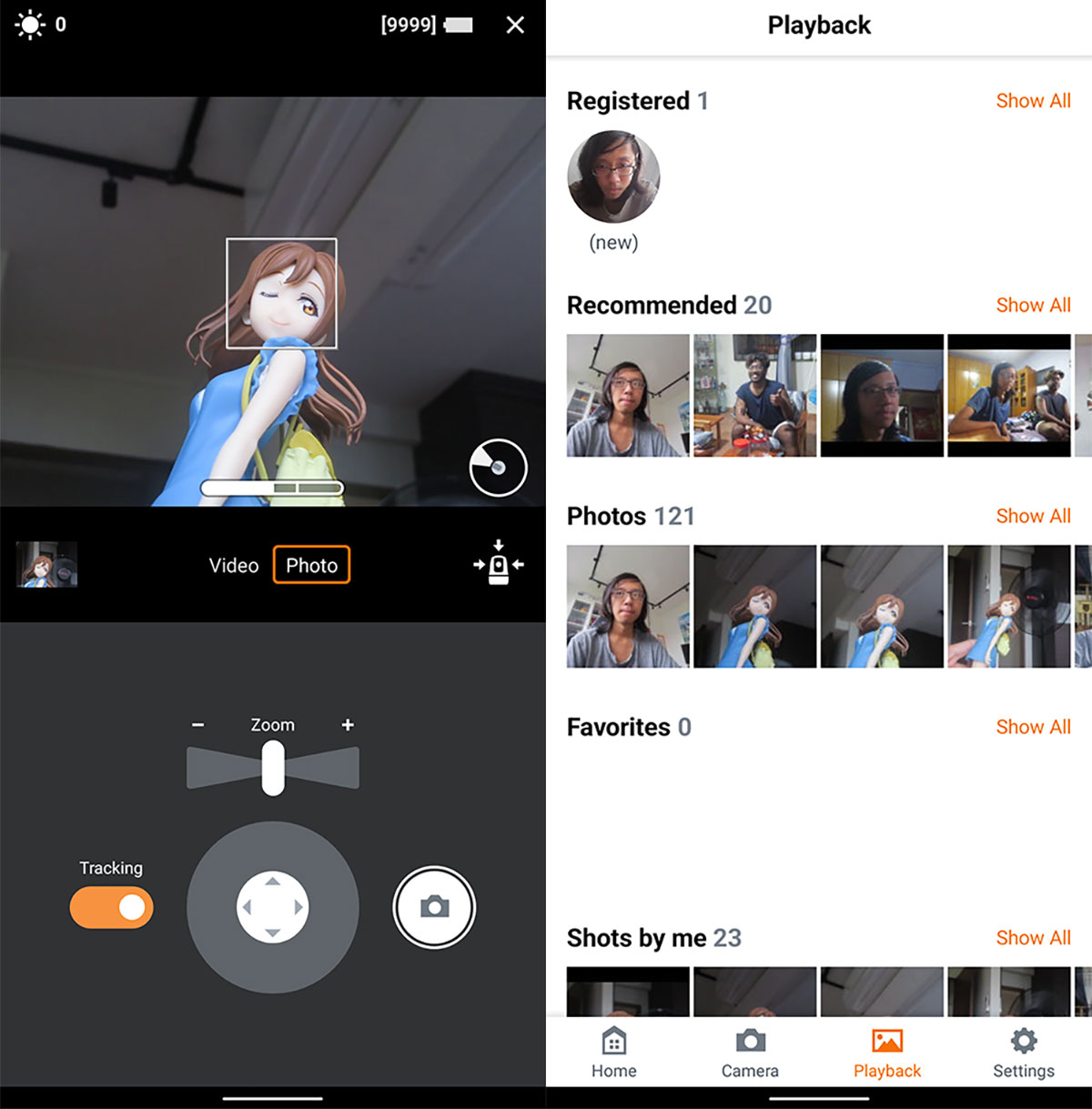 It's worth noting that the viewfinder isn't 100% lag-free. It's prone to freezing when you're manually moving the camera module around, and if your PICK isn't charged up, don't expect it to function smoothly. The worst instance of lag I've found is when it needed about five seconds or so to adjust exposure when I shifted the PICK from a dark room to in front of a window.

Within settings, you’ll also be able to fine-tune Auto Shooting Mode, with three presets, a custom mode and four adjustable parameters: shooting frequency, search range, zoom range and a video recording toggle. You're also able to adjust the framerate for videos, with the choice of 24, 30 and 60fps, switch aspect ratio for stills between 4:3 and 16:9, and turn off the sound effects to make it more inconspicuous. 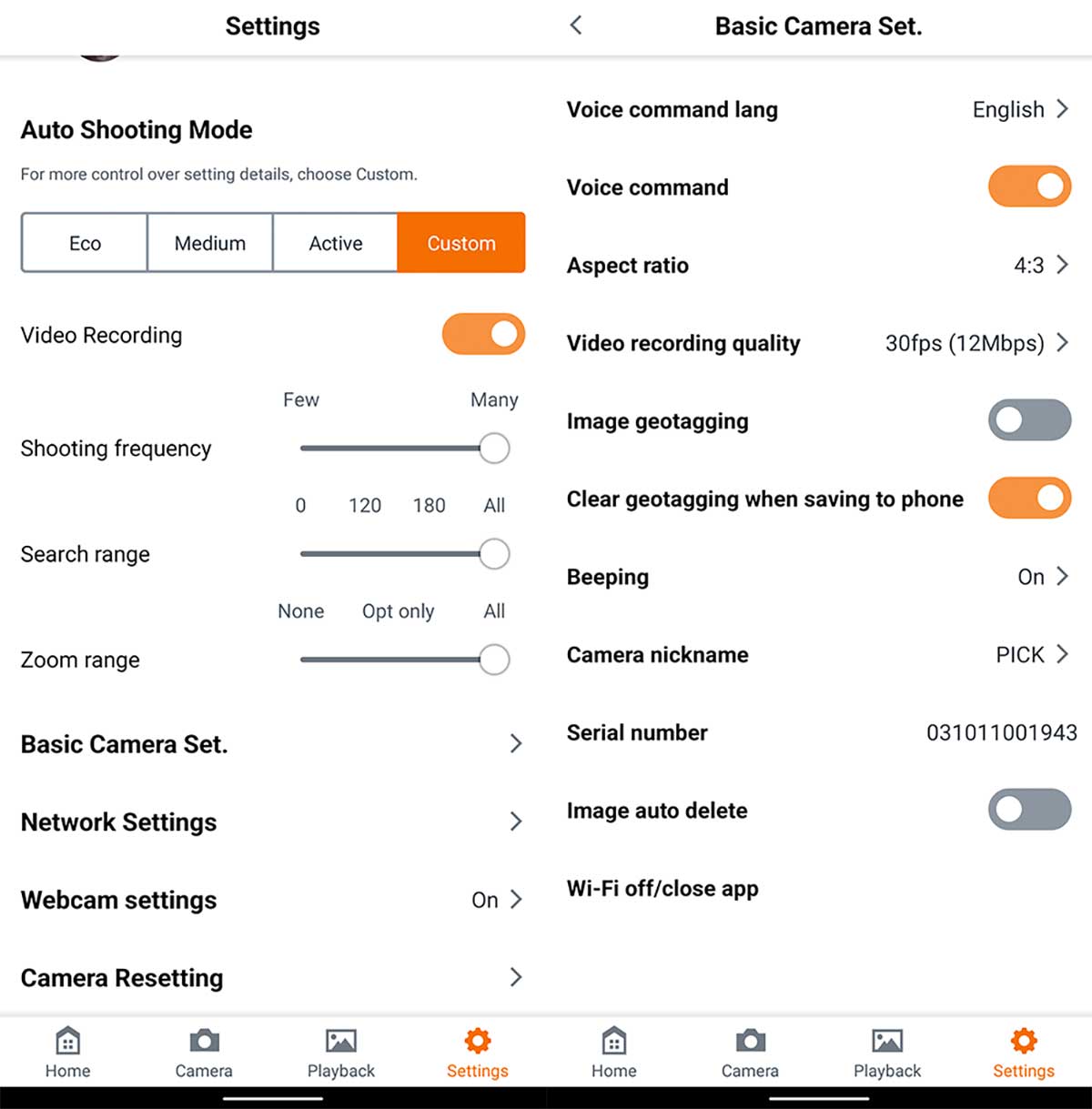 It should be noted, though, that the app uses a separate, temporary network for connecting the PICK. As a result, syncing with the camera can get a bit finicky. The PICK, and all its auto-shooting and tracking capabilities, will still function if you don't have the app in the foreground. But each time you open the app while the camera is on, it will prompt you to reconnect with the PICK to sync the pictures taken onto the app, leaving the camera in a sort of stasis for a few seconds while it reconnects.

Additionally, as a lot of the app's features, including the viewfinder and pictures taken by the PICK (which aren't automatically downloaded onto your phone), are only accessible if the PICK is on and connected with to app. The fact that photos taken aren't manually downloaded is the most inconvenient aspect of this; if you want to casually browse the gallery, for example, you'll have to turn the PICK on and reconnect it, or import the photos on the microSD card onto another device.

As an aside, automatic video recording is only possible with the app in the background, meaning that it won't record with the app open unless you specifically start recording in the viewfinder.

To wrap up this section, the app will notify you if your recent shots are too dark, as well as when the PICK is low on battery. Battery life itself wasn't an issue for me as I used it on and off, but it likely won't be able to last the whole day, especially as the PICK heats up when in use. Luckily, though, it's still usable while charging, so it'd be wise to put it near an outlet if you're using it for a gathering.

Write a Review
Compare This | Specifications
Form takes a while to get used to
Takes good enough shots in well, evenly lit spaces
Looks like a surveillance camera
Inconvenient having to reconnect with the app every time you open it
Almost no manual control
Images look smeary when zoomed in
Detects faces on posters and pictures
Smile tracking doesn't work sometimes
Candid camera captures questionable
Better competitive options for active tracking needs
Steep asking price
Our articles may contain affiliate links. If you buy through these links, we may earn a small commission.
Sponsored Links