To Infinity And Beyond. 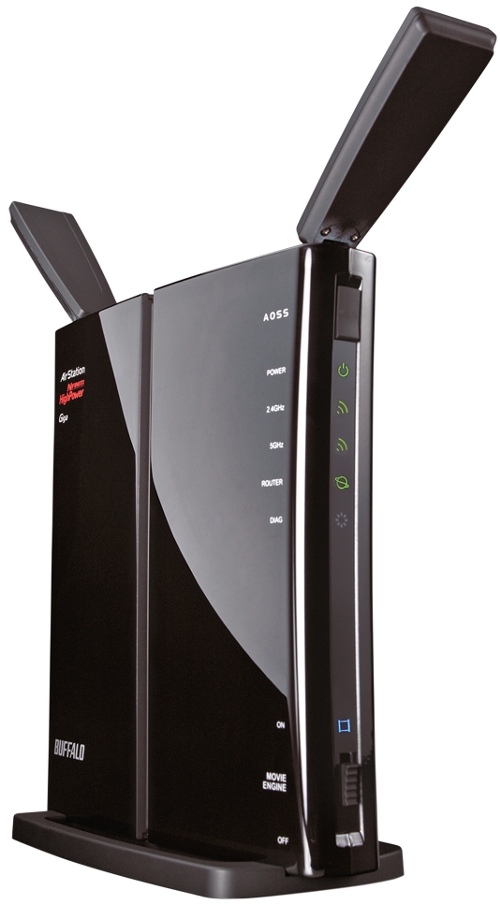 Supplementing their routers with DD-WRT firmware is nothing new to Buffalo, and the same can be said about the AirStation Nfiniti AG300H. Championed as a true dual-band router to tackle HD streams, Buffalo continues to offer its own stock "user-friendly" firmware as well as the Linux alternative.

A versatile stand accompanies the curvaceous AG300H, one which enables the sleek networking device to be positioned on the desktop or wall-mounted if need be. This router is armed with two foldable antennas, although we were surprised that Buffalo went with a 2x2 MIMO configuration instead of a 3x3 design. One Gigabit WAN and four LAN ports are placed behind the unit, including a USB 2.0 slot with remote access and NAS support. It reads up to four drives, or the first four partitions it detects.

The AG300H is anything but typical. For instance, Buffalo has equipped their own secure wireless connection button, dubbed as AOSS (AirStation OneTouch Setup System), instead of the regular WPS option. We also noticed an unusual On/Off/Auto switch. Essentially, the AirStation functions as a router when “on” and as an access point when “off”. The “auto” selection enables the device to toggle between both modes. To configure the unit via the web browser, note that its default IP address is 192.168.11.1 as a router, and 192.168.11.100 as an AP.

Features wise, the AG300H packs quite a wallop although it still falls a little short. Enthusiasts might appreciate attributes like the integrated BitTorrent client, VPN pass-through, discrete 20MHz and 40MHz channel support, and versatile QoS mode (up to eight applications). On the contrary, we also noticed that the AG300H does not extend any print server features or configurable Wireless 802.11 modes.

For our tests, we’ve based the throughput results on the pre-installed "user-friendly" firmware, and not the professional DD-WRT version. At 2 meters, average downlink and uplink throughputs were measured as 64Mbps and 62Mbps respectively on the 2.4GHz band, dipping to 21Mbps and 22Mbps at 25 meters. That’s an average showing, but what’s truly worrying is the router’s consistent packet loss (0.3%) over UDP streams, regardless of range.

Conversely, the AirStation garnered rather impressive results on the 5GHz band. It managed to secure downlink and uplink speeds of 117Mbps and 95Mbps at 2 meters, while sustaining 75Mbps and 54Mbps at 25 meters respectively. Unfortunately, an average packet loss of 0.5% persisted even on the 5GHz radio.

In short, the AG300H brings a wide array of features and DD-WRT goodness to the table, including a laudable 5GHz performance at close quarters. But we won’t recommend it for HD streaming just yet, not till Buffalo can provide more stable streams to justify the S$169 price tag. 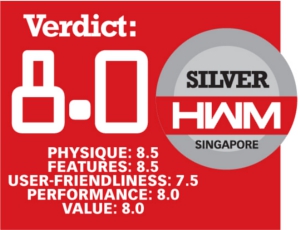