Now that Intel's H55/H57 chipsets with integrated graphics have been released, they and the dual-core Clarkdale processors are probably being marketed as the mainstream choice for users who are not into things like video encoding or 3D rendering. While our recent shootout of H55 motherboards showed that some models come with surprisingly high-end features, those looking to get a more complete set of features like multi-GPU support or RAID should look at the previous mainstream candidate for Intel's Core i7/i5 processors, the P55 Express chipset, where such features would be the norm rather than exceptions.

Unfortunately, a decent Intel P55 motherboard can set you back by at least US$120. That's the lower end though, as many boards are easily more costly than that. The budget shopper however will find some choices, albeit from smaller brands like ASRock and ECS. Now you can add to that list, Jetway's Kuroshio BI-700, which goes for around US$116 and has the basic P55 features. 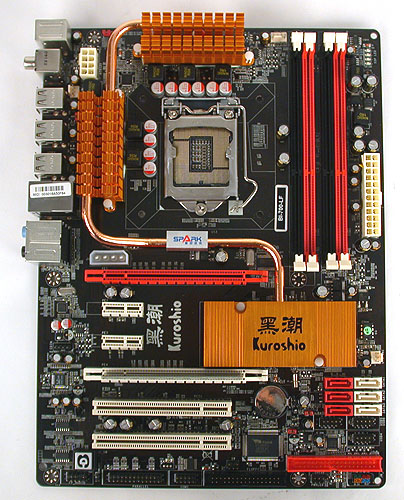