Brydge+ iPad Keyboard - Turn Your iPad Into a MacBook

Brydge+ iPad Keyboard - Turn Your iPad Into a MacBook 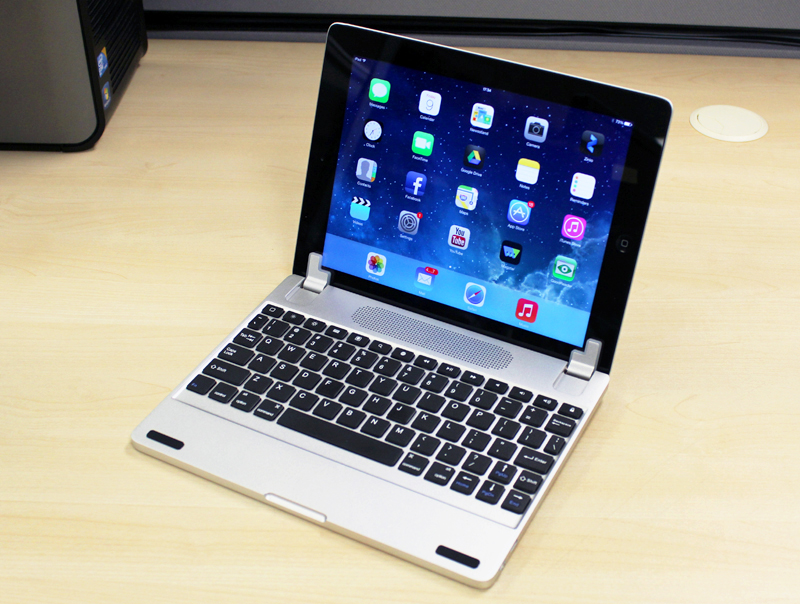 When the Brydge keyboard first appeared on Kickstarter in 2012, the company was run by three entrepreneurs from Silicon Valley. Since then, Brydge has been acquired by a new group of investors based out of Singapore who have big plans for the brand and will soon be bringing Brydge keyboards to Apple retailers island-wide.

What makes the Brydge keyboard unique? While there are plenty of bluetooth keyboards available for iPad users, few offer a clamshell design that lets you open and close the iPad like a notebook, and even fewer feature built-in stereo speakers. With sturdy hinges that let you adjust the viewing angle, and a robust aluminum or polycarbonate build, the Brydge could be the ideal choice for users with productivity needs, but who still want the option to quickly detach the tablet when a keyboard isn't required.

Three versions of the Brydge keyboard are currently available: two aluminum models, one with and one without built-in stereo speakers, and a black polycarbonate model which also includes built-in stereo speakers. All three models are designed to be used with the iPad 2, 3 or 4, while versions for the iPad Air and Mini are currently in the works and should be available later this year.

For this review, we'll be evaluating the Brydge+ aluminum model with built-in stereo speakers. This model can be purchased from Brydge's online store for US$134.99.

Machined out of a single block of aerospace grade aluminum, the Brydge+ offers a similar look and feel to Apple's own products. In fact, if you have a black iPad, it will look just like a mini MacBook Pro when you hook it up with the Brydge+ unit. The keyboard feels overbuilt and is quite heavy, weighing 525g, which is almost as much as the fourth-generation iPad (652g) we're using for this review. Most of the weight is towards the front of the keyboard, and we're told that, due to the weight of older iPads, the extra weight is necessary to stop the iPad from toppling over when affixed with the keyboard. The upcoming model designed for the iPad Air should be significantly lighter.

The keyboard is also quick thick, and doubles the thickness of the iPad, making it about the same size as the thickest part of a MacBook Air when fully closed (17mm). 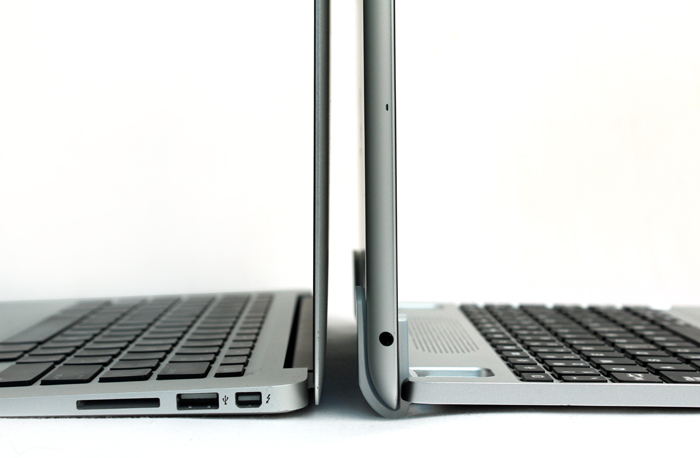 At the back of the keyboard, two hinges lined with soft silicone create a tight enough fit to lock the iPad in place. As mentioned, we're using an iPad 4 for this review, but a thinner iPad 2 will fit too, albeit slightly less snugly. If you're worried about your iPad 2 falling out, the Brydge+ actually comes with a pair of iPad 2 shims that can be fitted into the hinge to provide a tighter fit.

While the hinges are large and provide a secure fit, they're perhaps the only area of the Brydge+ that isn't that attractive. Due to the size of the hinges, they're rather conspicuous and, as they're also quite thick and an odd shape, they somewhat spoil the clean lines of the rest of the device. 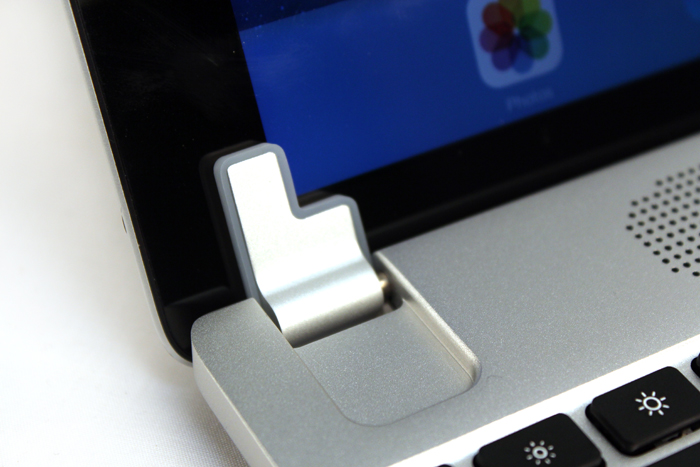 The hinges themselves feel very robust, and are quite stiff, which lets the iPad be tilted through a full 180-degree range, from closed all the way to completely open and level with the keyboard. This gives the Brydge+ a distinct advantage over almost all other keyboard cases out there, most of which use a slot or stand to position the iPad at specific angles. With the Brydge+, working with the iPad in your lap or on a table is equally comfortable, as the display can easily be adjusted with an ideal viewing angle. The hinges also extend slightly past the base of the keyboard, which lets them act as feet when the display is open, slightly elevating the rear of the keyboard to provide a more comfortable typing angle. The base of the keyboard also has four rubber strips, which help keep the device from sliding around on the table. 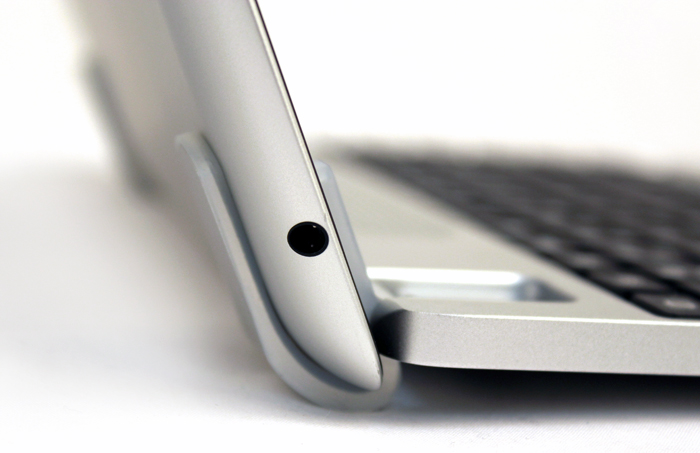 With the hinges closed, the iPad closes neatly over the top of the keyboard, fully protecting the front display and, thanks to a magnet, putting the iPad - as well as the keyboard itself - to sleep. Thin rubber strips on the wristrest area protect the display by preventing it from fully touching the keyboard. Unfortunately, the rear of the iPad is completely exposed, so you might want a carrying case to protect it from scratches during travel.

Setting up the Brydge+ is relatively pain-free. Just slide the power switch to the On position and the light will turn blue for a few seconds. Next, hold Control + K on the keyboard to make it discoverable on your iPad's list of Bluetooth devices. Select Pair and the keyboard should be ready to use.

Of all the iPad keyboards we've tested, the Brydge+ definitely offers the best typing experience, and easily rivals or surpasses many notebook keyboards. The keys are very firm, bordering on slightly stiff, with a surprisingly generous amount of travel, resulting in a very satisfying and comfortable typing experience. Despite the slightly smaller size of the keyboard - roughly 88% the size of a full-size keyboard - spacing between each key is quite generous and it shouldn't take too long to become fully proficient. Anyone with experience typing on a netbook will have no trouble transitioning to the Brydge+. The lower right area of the keyboard, where Brydge has squeezed in full-size arrow keys, does feel slightly cramped, and the right shift key is a bit undersized as a result. 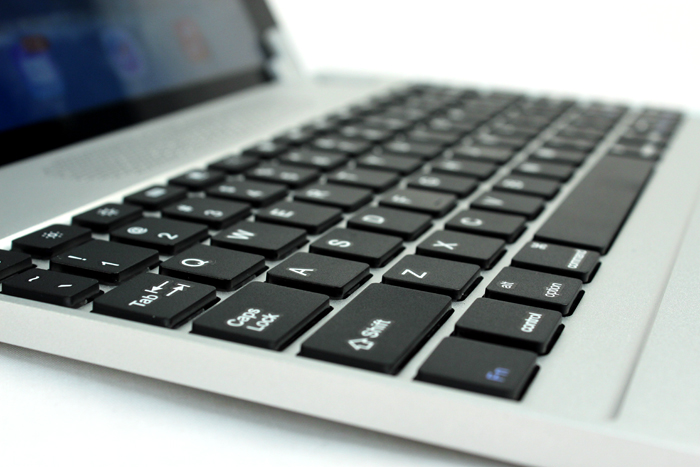 The top row of the keyboard has dedicated iPad and media control keys, including keys for the home button, display brightness, and finder. Unfortunately, a few of the buttons no longer work in iOS7, such as the Photos and Internet button. Another minor issue is the placement of the lock screen button, which is directly above backspace and can easily be mishit if you're not careful.

Unfortunately, the keyboard is not backlit, although that may change for future models.

Positioned above the keys, the Bridge+'s large speaker grille needs to be connected via bluetooth separately from the keyboard, and can be done by holding down Control + B until a four-tone sequence is played, then selecting Brydge Speaker in the iPad's Bluetooth menu. 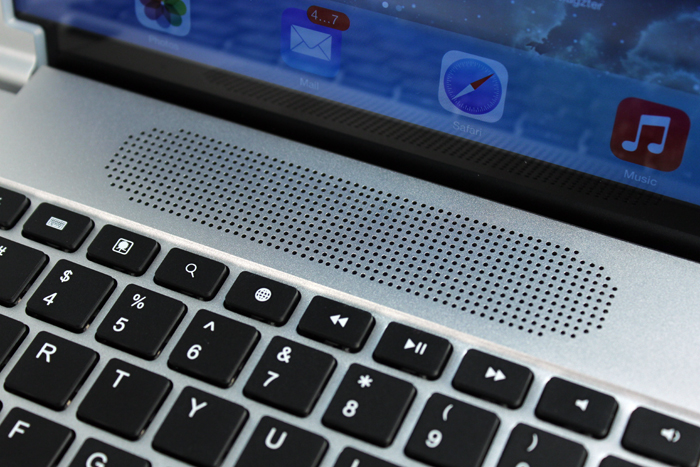 The speakers are quite loud, and a definite step up from the iPad's own speaker, but not as good as the audio you would get from a stand-alone portable Bluetooth speaker like an X-Mini. Overall, the tonal range was a bit limited, with thin bass, and slightly muddy treble. Nevertheless, if you're using your iPad as a personal movie watching device, the Brydge+'s central speaker is far better than the weak one-sided audio of the iPad's own speaker.

Like most bluetooth keyboards, the Brydge+ is charged via a micro USB charging cable and can allegedly last for months at a time, although heavy speaker use will obviously decrease this.

The Brydge+ keyboard probably isn't for everyone. While most other iPad keyboard cases try to keep their designs as slim and light as possible, the Brydge+ nearly doubles the iPad's weight and thickness. But what you get in return is a full notebook experience - something you just can't find with any other iPad keyboard case - thanks to the Brydge+'s adjustable viewing angle, open and close clamshell design and superior keyboard. With Microsoft Office now available for iOS, a Brydge-equipped iPad is one of the best compact-sized productivity devices you can buy. Yes, you could just buy an 11-inch MacBook Air, but then you won't have a touchscreen and you can't remove the display when you just want a tablet to use on its own.

Of course, not everyone buys an iPad to do work on, and at US$149.99, the Brydge+ is very expensive (the polycarbonate model is a more economical US$99.99), but if you've been looking to turn your iPad 2, 3 or 4 into a serious productivity device, and you're willing to sacrifice some portability in return, a Brydge keyboard should be your only consideration.

Write a Review
Compare This | Specifications
Comfortable typing experience with firm keys
Attractive design with adjustable screen angle
Loud stereo speakers
Expensive
Doubles the weight and thickness of the iPad
Doesn't protect back of iPad
Our articles may contain affiliate links. If you buy through these links, we may earn a small commission.
Sponsored Links