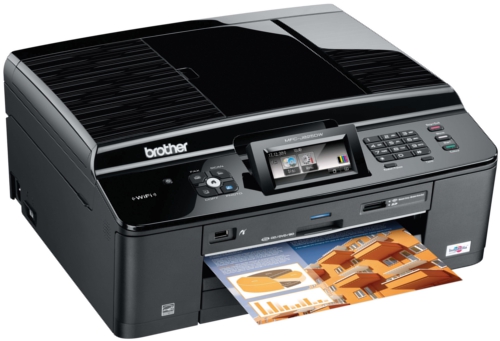 With the current trend of printers eschewing cables for wireless connections, Brother has toward the end of last year unveiled their latest line of multifunction color inkjet printers that also hops on the bandwagon, allowing for sharing with multiple users in the home or office. The series’ flagship MFC-J825DW sports 4-in-1 capabilities of print, scan, copy and fax. With additional features such as auto-duplexing and printing on printable CDs and DVDs, the MFC-J825DW looks to be a competent addition to anyone’s home office.

Function is always at the top of the list when purchasing a printer; so many printers don’t exactly score high in the looks department. But we are glad to say that the MFC-J825DW possesses an eye-pleasing figure. Be warned though, the glossy surface of the scanner lid is sure to attract a lot of fingerprints.

Setting up the MFC-J825DW is simple, and with the front-loading ink system, you need not worry about keeping the sides of the printer free of obstruction. Connecting the MFC-J825DW to a Wi-Fi network is as simple as identifying the desired network and entering the correct credentials.

Print quality for monochrome documents is average, with the text sharp enough for most business documents. But the MFC-J825DW faltered when we printed text documents with color graphics, with colors appearing washed out. On the other hand, the MFC-J825DW managed to produce vibrant pictures that weren’t overly-saturated when printed on glossy photo paper.
Speed-wise, the MFC-J825DW provides mixed results, with monochrome document print times right in the middle between the fastest and slowest printers we’ve tested to date. Color document printing was faster though, and oddly, the copy speed times also mirrored the document print times, with color copying proving to be quicker while black and white fared worse. To give credit where it's due, the MFC-J825DW scanned documents quickly, much faster than some of its peers.

Overall, the MFC-J825DW is a good value-for-money multifunction printer that offers auto-duplexing, a 20-sheet ADF, a touchscreen control panel, and built-in wireless connectivity. We would recommend the MFC-J825DW for home use, but office usage might be a stretch, as its limited paper capacity (100 sheets), and average print speeds may not be as suitable. 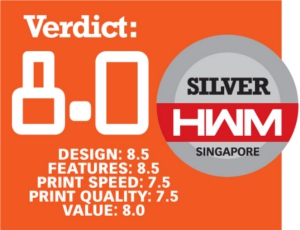