See Things in a Different Light

See Things in a Different Light

Apart from the fearsome GeForce GTX 295 and GTX 285 , NVIDIA also introduced something entirely new at this year's Consumer Electronics Show. If you've seen a 3D movie before, the kind where you have to put on funky glasses, then you'd probably already have a good idea of what NVIDIA has announced. That's right, 3D images, and more specifically, the GeForce 3D Vision.

In a nutshell, NVIDIA's GeForce 3D Vision makes use of stereoscopy to present to viewers 3D images. The working principle behind this is fairly simple and has been in existence for well over a century, having been invented by a certain Sir Charles Wheatstone back in 1840.

For the eyes to perceive something in 3D, there must be some perception of depth. To achieve this, stereoscopy presents two images to the eye, nearly identical to one another but with minor deviations. In doing so, it creates an illusion of depth, leading the mind to believe that it is seeing the image in 3D. 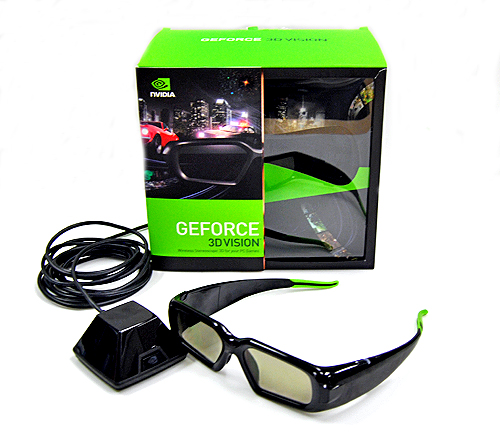 However, the 3D Vision concept is not exactly new. In fact, NVIDIA had earlier, since the days of the RIVA TNT2, supported stereoscopic 3D via a dedicated driver but required either 3D capable displays (Zalman comes to mind here), or the much more economical anaglyph glasses (those cheap and funky blue-red shades) and passive polarized 3D glasses. While they were decent enough to wow users those days, it soon became a cheap thrill. Despite some special 3D bundles by vendors, sadly that didn't take off, because the stereoscopic effect wasn't quite pronounced and the images produced were regularly criticized of being poor quality. Thus the entire user experience generally left much to be desired - especially for extended usage. Fortunately, advances in technology have allowed NVIDIA to have a second go at bringing 3D images to your homes. Still requiring stereoscopic 3D drivers, but now combined with their own hardware and updated requirements to re-ignite their 3D efforts, this time they are confident they'll succeed.

3D images generally convey a sense of heightened involvement and awareness. So having said this, NVIDIA hopes games and movies would become a more immersive and fulfilling experience with their new GeForce 3D Vision kit, and we'll be giving it a look-see to see if it really works, or if it's all hype and hot air.