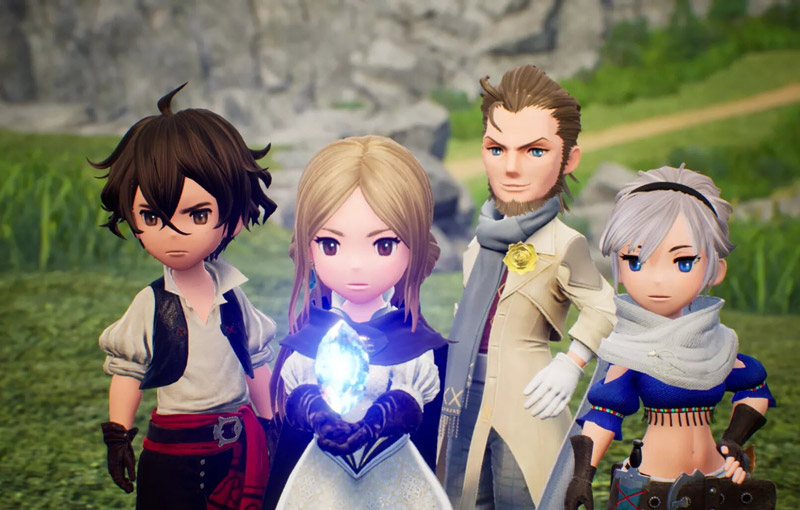 JRPGs have changed quite a bit since the 90s. Where Final Fantasy was once a number-grinding affair of turn-based battles and medieval fantasy, recent entries have incorporated more modern locations and real-time combat as the franchise constantly evolves. Still, there’s something to be said about the feel of an old JRPG - where grinding out levels by stumbling into random encounters was how you’d spend more than one cosy weekend.

Bravely Default 2 feels like an old JRPG, and very much on purpose. I used Final Fantasy as an example because this game pulls spells directly from that franchise, and tonally, fits right in with that series - the main story even involves crystals! This familiarity extends into the JRPG genre as a whole, from the popular ‘amnesiac protagonist’ trope to the supporting character archetypes (a mercenary! A princess!) used. It would be shameless, if it didn’t feel so dang earnest.

How to collect crystals with friends and not end the world 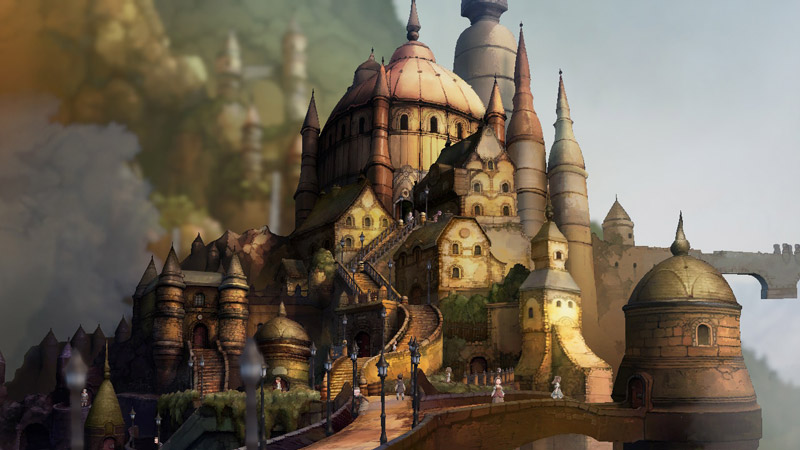 The story puts you in the boots of Seth, a young sailor who finds himself washed up in Excillant (ah, JRPGs and their dumb naming conventions) after a terrible shipwreck. Naturally, our hero has amnesia - which means that you’ll have to deal with a lot of him saying, “I dunno!” whenever other characters question his origins or motivations. Fortunately, the people of Excillant are friendly, and Seth doesn’t find it too difficult to fit in and start making friends. He’s joined by several companions, and soon, his presence in Excillant is given purpose: Seth and friends must journey through various kingdoms to retrieve magical crystals before an almighty evil is unleashed upon the world.

As far as stories go, it’s not terrible. It just isn’t very interesting. It doesn’t help that this whole crystal-revolving plot feels like something you’ve seen a thousand times before, or that Seth and the game's supporting characters play on very old tropes. It almost feels like a remake of some childhood game you’ve forgotten about - that’s how much it retreads old ground. Fortunately, the story opens up in a major way after its first few hours, throwing you into an open world where you stumble upon different towns that house interesting events. There are some twists here and there that liven things up, but it does take some time to get there. The sidequests you pick up along the way largely boil down to generic fetch quests, which is disappointing. 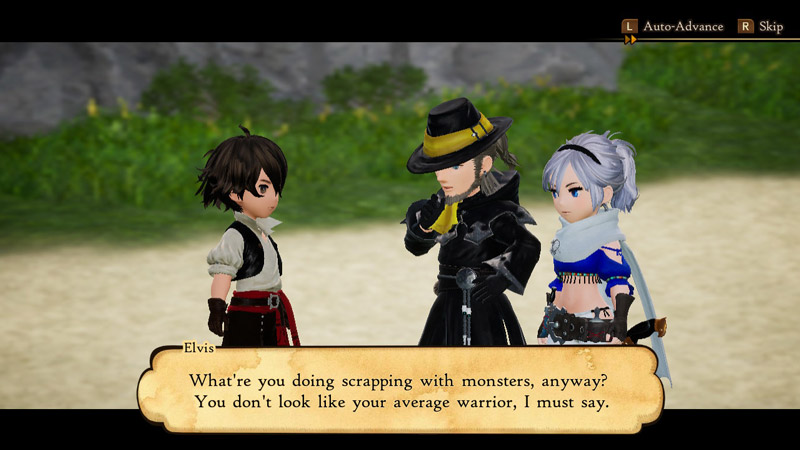 The characters are fun and lively, and you get plenty of opportunities to interact with them. As you explore the world, you’re given prompts to listen to little discussions between the party about new locations and old battles. They’re cute little chibi-style creatures, who look funny when juxtaposed against each town’s gorgeously hand-painted environments - but not in a bad way. The towns and the overworld are bizarrely different on a visual level, however; the towns being elaborate, beautifully vibrant setpieces and the overworld just being a collection of generic, pixelated environments. There are two different art styles clashing here, which means that I always felt a little restless in the overworld as I battled my way through hordes of enemies. I just wanted to get to the next pretty place, not wander around this big, dull stretch of land!

Unfortunately, you’ll be spending lots of time in the overworld. In the same vein as certain, older JRPGs, this game requires… a lot of grinding.

To Brave or to Default, that is the question 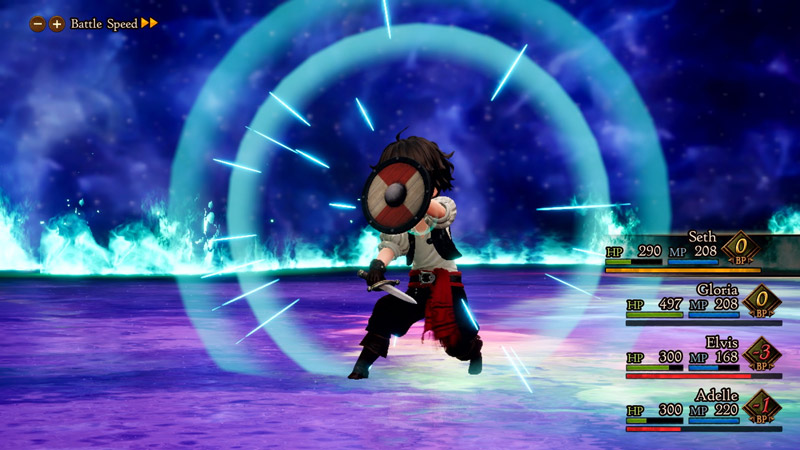 Bravely Default 2 uses a turn-based combat system, which is something that can feel ancient in modern RPGs unless they mix things up - just look at Final Fantasy 7 Remake, and how seamlessly it blended real-time and turn-based combat to wonderful effect. This game’s combat is not quite as ambitious, but it does come with an interesting twist. Essentially, you have to choose between striking first and hard, or defending yourself to keep the battle going.

See, each turn you take during a battle uses up something called a ‘Brave’ point. If you opt to ‘Default’ during a turn, you’ll take less damage, forgo the turn and bank a ‘Brave’ point so you have an extra turn to use later. Alternatively, you could hit ‘Brave’ and spend all the points you have saved up, and even spend points you don’t have. That means you could spend four turns at one go without any points saved up, attacking the enemy and dealing massive amounts of damage quickly. The downside is that you’ll then have to sit on the sidelines for the next four turns, as you’ve already spent those points. Suddenly, you're vulnerable.

This throws an interesting element of strategy into the mix of combat. Do you play it safe and Default, ensuring that you get two turns later without having to go into the negative? Or do you see a couple of weak-looking monsters and decide that you’re strong enough to wipe them all out in a devastating flurry of attacks? There’s a reason they called it Brave, after all. It’s a risk, but one that pays off if used wisely. In case it wasn’t clear, I loved this Brave/Default system. It’s a really fun twist on turn-based combat, and turns each boss battle (which can get quite difficult) into weirdly fascinating puzzles to solve. 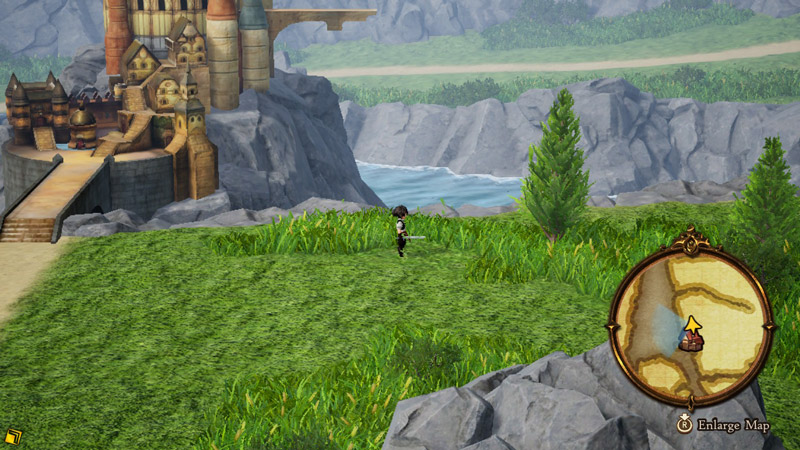 In addition to this, Bravely Default 2 also has a job system. Lots of jobs become available to each party member as they level up and do quests, and they basically function as classes that come with different spells and abilities to use in battle. Mages are better at long-range spellcasting for example, while the Vanguard is more of a melee-focused job. Two jobs can be applied to a character, the second becoming a ‘subjob’ that gives them all of its abilities but can’t be ranked up. The way you approach combat has a lot of interesting variety as a result, since you can mix and match a whole bunch of jobs to make each party member fill different roles.

Now comes the bad bit. Bravely Default 2 feels like a game swollen in size and length, and I don’t mean that in a good way. There is a lot of XP grinding that gets forced on you here. The first couple hours are relatively smooth sailing, but bosses and dungeons start to form roadblocks in progress eventually - and grinding out enemy encounters for XP becomes the only way forward. Having to sit through so many battles one after another as you mindlessly chase after XP causes the Brave/Default system to eventually lose its lustre. In fact, it makes everything lose its lustre. The story starts to feel awkwardly paced when you're just stomping monsters for a half-hour. 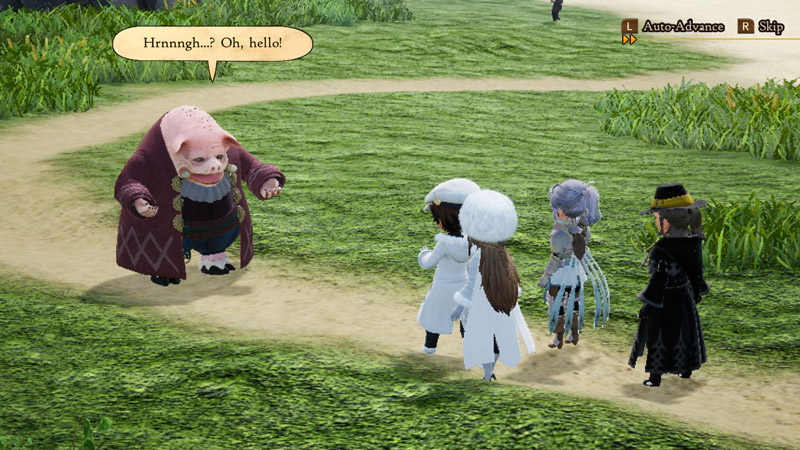 Bravely Default 2 is a fun return to old 90s JRPGs, providing plenty of nostalgia for players wistfully dreaming about turn-based days gone by. Newcomers might also enjoy the interesting element of strategy the Brave/Default system introduces to combat, as well as the beautiful-looking towns and simple pleasures of watching numbers tick up on a screen. The characters might feel like they're pulled out from a list of tropes, but they're earnest in the face of that, which endeared me to them greatly.

If this were a shorter game, I’d be a lot kinder to it - but the dull sidequests and incessant grind made my playthrough feel like a chore sometimes, getting in the way of an already bland story. I guess you can put a price on nostalgia. On that note, Bravely Default II has no pretension that it's a traditonal JRPG and if the genre appeals to you then so will the game.

Write a Review
Compare This | Specifications
Unique battle system
Gorgeous handpainted towns
Interesting, complex job system
Nostalgic feel
Story is bland and takes awhile to get going
Lots of grinding
Visuals in the overworld aren't great
Characters feel like they're pulled from a list of JRPG tropes
Our articles may contain affiliate links. If you buy through these links, we may earn a small commission.
Sponsored Links