In this day and age, many use their smartphone as the primary music playback device for obvious reasons. The portable music player is in no way dead and buried, with the iPod Classic still in use and Sony introducing a new model of their own. But the 8GB/16GB of storage offered by many new smartphones is enough to carry a sizable set of your favorite tunes at all times to make them the new preferred players. So with your most favorite tunes on your smartphone, the next step would be to find solutions that can playback audio directly from your mobile phone.

Leveraging on the Bluetooth capabilities of mobile devices, wireless playback is becoming increasingly commonplace thanks to usage convenience. Even high-end audio manufacturers have entered this market segment bringing us products such as the B&O Beolit 12 and the Bose SoundLink. We were present when the SoundLink was launched and now we have it in our labs for more thorough testing. 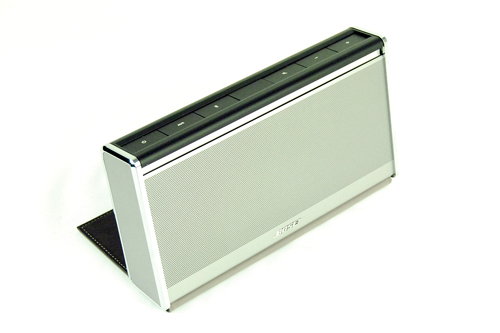 It is important to note that the Bose SoundLink does not fall in the same category as other Bluetooth speakers we have reviewed previously. Unlike the Jabra Jambox and the Soundmatters FoxL v2, both of which emphasized portability and speakerphone capabilities, the Bose SoundLink is designed for enjoying music in small spaces. As you can see from the snaps below, this particular set of speakers is considerably larger in size and stature. Its 1.3kg weight also means that it is not as conducive to being carried in your hand or briefcase. However the extra weight will not be noticed much if you chuck it into your backpack. 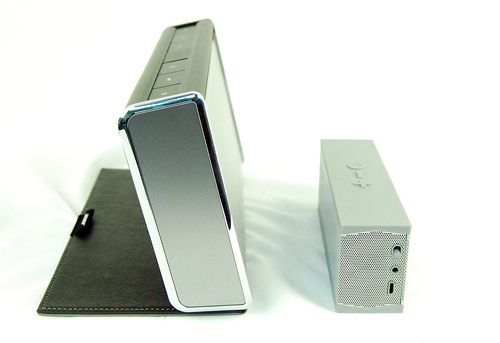 The larger size is because the Bose SoundLink packs much better hardware than the smaller traditionally sized Bluetooth speakers. The speakers are armed with four 2-inch drivers to handle audio duties. Also included are dual opposing passive radiators with a waffle cone enclosure. Quite a mouthful, but this refers to two passive radiators which are intended to help out with low frequency performance. The opposing orientation is a common trick used by portable speaker manufacturers to eliminate the problem of 'skipping' or 'hopping' that the smaller devices encounter at high audio volumes. The waffle cone enclosure is Bose’s own signature touch to the design, intended to help with better bass dispersion.

As if the raw hardware was not enough, Bose has also fitted the SoundLink with a built-in Digital Signal Processing unit. True music lovers and audiophiles will undoubtedly have their own complaints with the amplification prowess of their smartphones. As such, this addition should help remedy the situation to a certain extent. 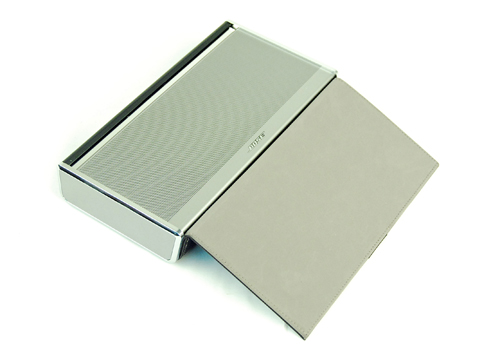 With an impressive list of specifications up till now, it was somewhat of a letdown to see that the Bose SoundLink uses the Bluetooth A2DP profile for connectivity. A2DP is a lossy format which means that there is bound to be some degradation of audio when Bluetooth connectivity is used. Alternatives like Kleer, which can stream tracks with CD quality, are available on the market and is used by other audio manufacturers in some of their better audio products. Kleer might have lent the Bose SoundLink even greater credibility with sound aficionados. We will have to see how Bose’s decision to go with A2DP impacts performance during our listening tests on the following pages.

Before starting to evaluate the aesthetics of the Bose SoundLink, we would like to clarify that the device comes in a regular and a premium version. While there is no difference in the technical specifications of the two models, the former comes with a nylon casing while the latter has leather casing. As you can see from the shots, we have the premium, leather clad version of the product in our labs

The device has an overall matte, silver finish with a mesh front face. This combination lends itself to a classic Bose feel that you can easily identify at fist glance. The leather case gives the Bose SoundLink a touch of elegance. The case is also removable and users have an option to choose between different colors of their liking. The case with its magnetic clasp can be opened up to provide a stable base on which the SoundLink can stand upright, thus giving it a crucial functionality to better the SoundLink's usability. 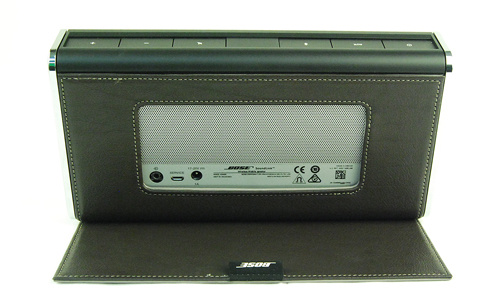 Six large buttons are provided on the top of the device. Those on the right control the volume and provide an option to mute the speakers. On the left you will find the buttons to power on the device and switching on Bluetooth. The Aux button allows for playback from the 3.5mm port situated at the back. A micro-USB port is provided so that the SoundLink can be connected to your notebook or computer for firware upgrades (does not support storage devices for playback). Although the device has a battery life of six to eight hours courtesy of its onboard lithium-ion cells, you can still use a power adapter for continued operation.