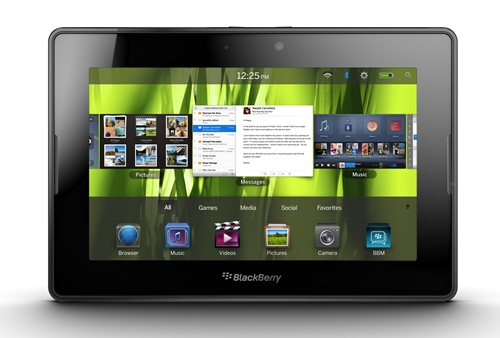 The BlackBerry Playbook is late in joining the tablet party. Major powerhouses such as Apple and Samsung are already in their second iteration of their tablet models and BlackBerry has just begun with its first. Nevertheless, we feel that as a first attempt, the BlackBerry PlayBook is quite a decent offering.

Equipped with the brand new QNX OS, the BlackBerry PlayBook comes across a refreshing product in the midst of the Android and Apple tablets. The irony of the QNX OS is that it is simple, yet interesting. While it offers nothing extraordinary in terms of looks, the PlayBook takes us by surprise with its ingenious method of navigation. The use of the bezel around the screen effectively eliminates the need for physical or virtual buttons, although we admit it does take some time and patience to familiarize ourselves with the different gestures. The PlayBook also makes multitasking a breeze as you can easily switch between apps with a few swipes. Generally, the QNX OS looks very promising and solid with its modern look and compelling features. When it comes to battery life, BlackBerry wins hands down in its class. It has the best battery life among the new 7-inch tablets and trumps some of the larger tablets too. In terms of appearances, the PlayBook is a head turner with its elegant design. The build quality is exceptional, which is a hallmark of BlackBerry devices.

Having the luxury of observing the competition for the past year, we are not too satisfied with some of the shortcomings of the PlayBook. It is missing some useful features that its competitors are very good at. For example, the ability to organize apps into folders and universal search function are absent on the PlayBook. This does not go well with the business-centric image of the PlayBook, where emphasis is on speed and efficiency. We also believe that mainstream users will also appreciate these two features for the convenience of finding apps easier. The app ecosystem is one key area that BlackBerry currently lags behind. We still do not know how the support for Android apps will work out eventually, but at the moment, the BlackBerry App World lacks in both quality and quantity of app choices. The one issue that annoyed us most is the Power button because it is so tiny and flushed to the surface. It certainly spoiled an otherwise great user experience. Currently, the native apps such as email and calender are only accessible if you have a BlackBerry smartphone. Although RIM has indicated that the native calender and email apps are coming in a future update,  potential buyers who are not BlackBerry users may be turned off by this limitation. This would mean the PlayBook's full features are only unleashed to the much smaller user group of existing BlackBerry devices instead of appealing to the masses.

The BlackBerry PlayBook Wi-Fi has been available in this region since end of June through the major telcos and other retail stores. The PlayBook will come in three storage capacities, which are 16GB (S$668), 32GB (S$798) and 64GB ($928). When compared to the HTC Flyer 32GB, the BlackBerry PlayBook fares favorably as it  not only costs less than the Flyer's promotional price of S$899 (launch SRP S$1,068), it offers a longer battery life, a comparable OS and solid build quality. This price range also puts the PlayBook in direct competition with Apple's iPad 2 Wi-Fi models. It is still anybody's guess as to how the BlackBerry PlayBook will fare in terms of sales here.

We feel that the future of BlackBerry PlayBooks lies with the QNX OS. At this point, it misses the mark slightly to be considered a viable alternative to iOS and Android 3.0 devices, but most of this is due to the lack of good app options to tinker with in the App World. Meanwhile for our other nitpicks of the OS, we believe RIM knows their shortcomings too and is working hard to perfect the OS. We have yet to see the full potential of the platform, but for now, the PlayBook is more likely to find itself in a niche market of corporate users due to its emphasis on security and integration with BlackBerry smartphones.