A Latecomer to the Tablet Party

All eyes were on Research In Motion (RIM) when the company announced their first tablet, the BlackBerry PlayBook in September last year. Many industry analysts saw the PlayBook as the magic bullet that could possibly put RIM back in the game. 2010 saw fierce competition from Android devices and Apple's iPhone that caused RIM's smartphone market to slide quarter after quarter. The competition was also slowly creeping onto RIM's stronghold in the enterprise sector. Further adding to RIM's woes was the growing "tablet fever" as the PlayBook was expected to be only available internationally by Q2 of 2011, a timing which may not be favorable for a company playing catch up with major players such as Apple and Samsung who have already served up their second generation of tablets. 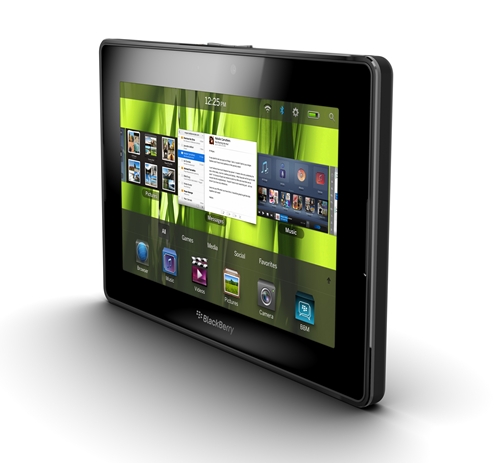 The BlackBerry PlayBook, in some ways, demonstrated RIM's efforts to arrest these problems. RIM adopts a brand new OS for the PlayBook, which is the QNX Neutrino micokernel architecture. The QNX OS is also expected to be powering future BlackBerry smartphones as well.

The PlayBook also packs a list of impressive hardware specifications to match the competition as it's powered by a 1GHz processor and is augmented with 1GB of RAM. Designed with a 7-inch screen, it makes the PlayBook more portable than the more common 10-inch sized tablets. To cater to different needs of users, RIM has offered three storage capacity options of the PlayBook - 16GB, 32GB and 64GB. The PlayBook unit in our review is the 16GB Wi-Fi version. According to RIM, there are two additional 4G BlackBerry PlayBooks in the pipeline, which are scheduled for release in the second half of 2011. Till then, all PlayBooks will feature Wi-Fi only connectivity. In addition, BlackBerry aims to strengthen its foothold in the corporate industry by promoting the PlayBook as the world's first enterprise-ready tablet. Let's see what the PlayBook has to offer in detail, but just before that, if you've never known or seen what the PlayBook brings to the ecosystem, this short video captured from our BlackBerry DevCon 2010 clearly highlights its strengths:-

We have grown to expect nothing but solid build quality from BlackBerry devices and the PlayBook is no exception. The PlayBook feels sturdy built thanks to its metallic body. The angular sides of the PlayBook play a major role in making the device feel real good in the hands. Moreover, the back has a rubberized matte surface, making the PlayBook less likely to accidentally slip out of off your hands or slide off the table. The PlayBook with its handy 7-inch screen measures a mere 10mm in thickness, making it one of the slimmest tablets in the market.

Surrounding the 7-inch screen of the PlayBook is a thick black bezel. At first glance, you might think that it is a design overlook on RIM's part but that's where assumed wrong. Implemented in the black bezel is a series of swipe-based gestures that you can utilize to navigate the interface. It is an interesting and refreshing concept by RIM, unlike the home button on the Apple iPads and the virtual buttons found in Android tablets. This will help keep the main display clear and visible, while the surrounding bezel area is used to invoke action/navigation functions. We'll explore more of this in detail on the following page. One last design note here is that stereo speakers are flanked on the left and right side of the device, which may affect the usability of the PlayBook. If not careful, your hands may block the speaker when you are watching movies and could be troublesome to avoid.

A 3-megapixel front camera and notification LED sit at the center top of the bezel in landscape mode. At the bottom of the bezel is the BlackBerry brand name, which indicates that the PlayBook is designed to be used in landscape mode by default. However, the screen rotation function enables you to use the device in portrait mode when needed just fine.

At the top, you will find the Power button and media controls. Our biggest gripe with the PlayBook is with the Power button. It is so small and recessed that we always have difficulty accessing the button. For a button that is used very often, we can't t understand why it is poorly implemented.  We have seen better power buttons on other tablets such as the HTC Flyer. Unlike the Power button, the media controls have a slight protrusion, which allows you to use them easier. We welcome the addition of the Play / Pause button as most tablets only have the volume controls as standard fare now. Along this same plane, you'll also find a 3.5mm audio jack for you to plug in your own earphones.

At the bottom of the PlayBook, you will find the HDMI, microUSB and charging ports. Like most other tablets, the PlayBook can be charged via the microUSB cable while transferring files at the same time.

At the back of the PlayBook, you'll find a 5-megapixel camera at the top and the stylish BlackBerry logo at the center. Just like the HTC Flyer, the BlackBerry logo adds a premium look to the PlayBook. This will likely appeal to corporate users who want a functional yet stylish tablet.