The BenQ GS2 review: The small and go-anywhere projector

The BenQ GS2 review: The small and go-anywhere projector 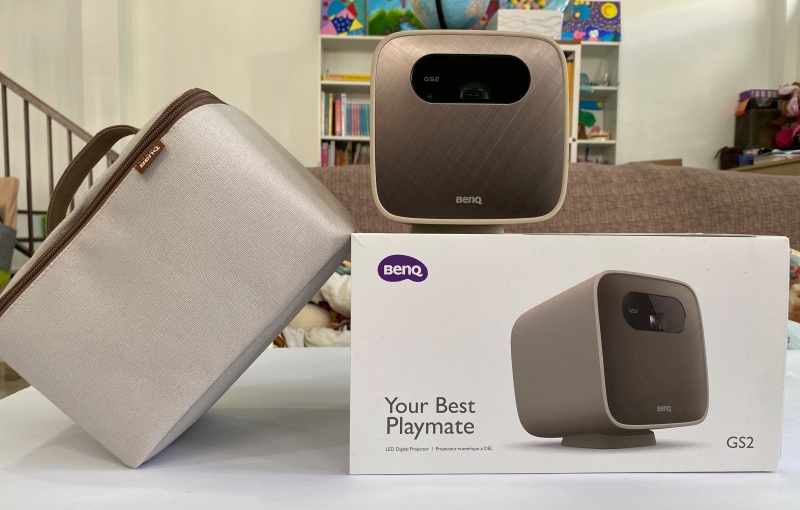 Whether at home or on the move, these days, we are no longer willing to wait to be entertained. When watching videos on our phones, laptops, or shows streamed from Netflix or Viu, we want things ready to go, right from the time our fingers are fast enough to open the app.

Our entertainment needs to follow us as well. Whether at home, camping at the beach or glamping in a hotel, we want to watch what we want, when we want it. And the Benq GS2 will let you do that whenever you need it and enjoy your entertainment in a much larger screen than any of your portable devices. 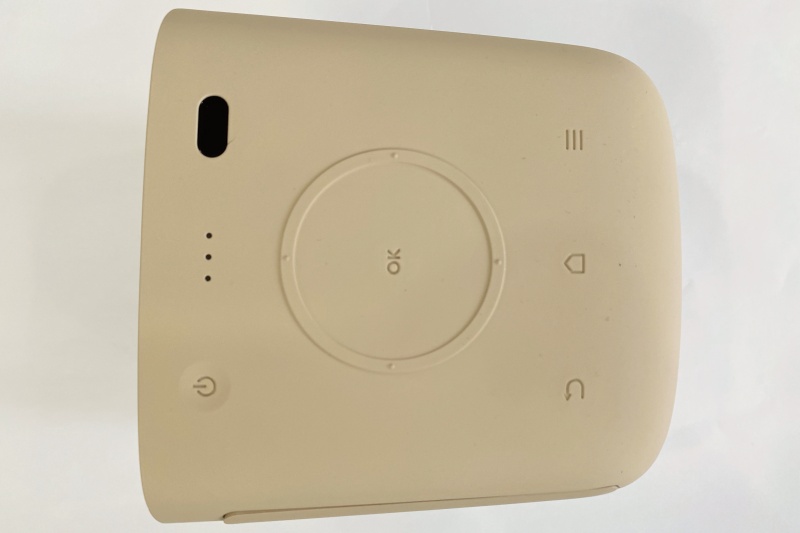 Straight out of the box BenQ’s new GS2 projector looks different, lacking the rectangular look so common to projectors. This is squat, blocky in its cube shape and rather “toad-like” as my daughter called it. The colour choice of its beige housing is somewhat questionable as it gives the projector an old-school feel, but the inclusion of direct access controls on the projector's top-face pulls you back to remind you that it's designed for modern-day needs. In fact, you'll notice the familiar Android phone navigation options present to traverse the projector's embedded user interface and Aptoide TV app store which is optimized for large-screen devices comfortably.

The BenQ GS2 is meant to be an ideal garden, camping or family holiday projector, so it has a built-in battery, splash proofing (IPX2 rated), and drop protection. Even if you don't plan to move much beyond our home, it's portable and rugged nature is also perfect anywhere at home when you've kids around. To accompany its lifestyle image, the provided stylish carry bag comfortably houses everything neatly with the projector, including the power supply, its Wi-Fi dongle and remote control.

Note that even if we mentioned about the power supply, the BenQ GS2 is a truly wireless projector in that it has a built-in battery and you could potentially screen a movie without wires. More on this when we put it to the test. 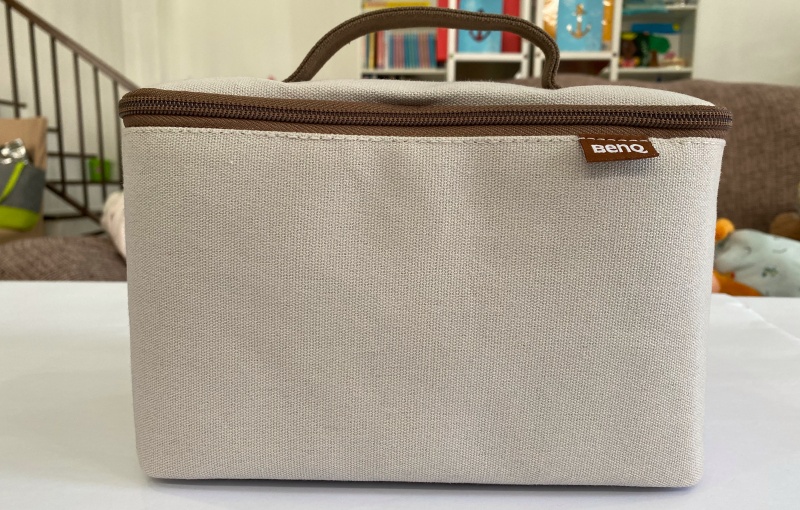 The bundled remote looks like those that came with old Apple TV sets. Simple enough to use, but I think the BenQ app for smartphones is more user-friendly, as you can call up your smartphone's keyboard to make short work of any typing needs, especially when entering Wi-Fi passwords and the likes. 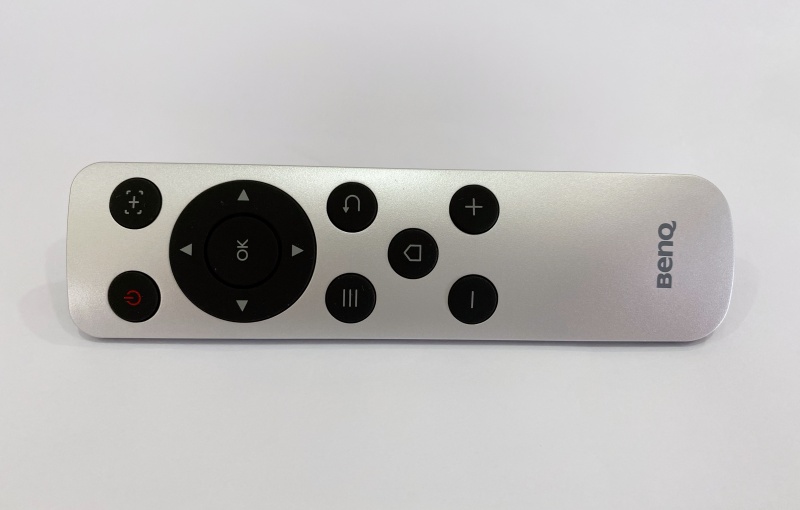 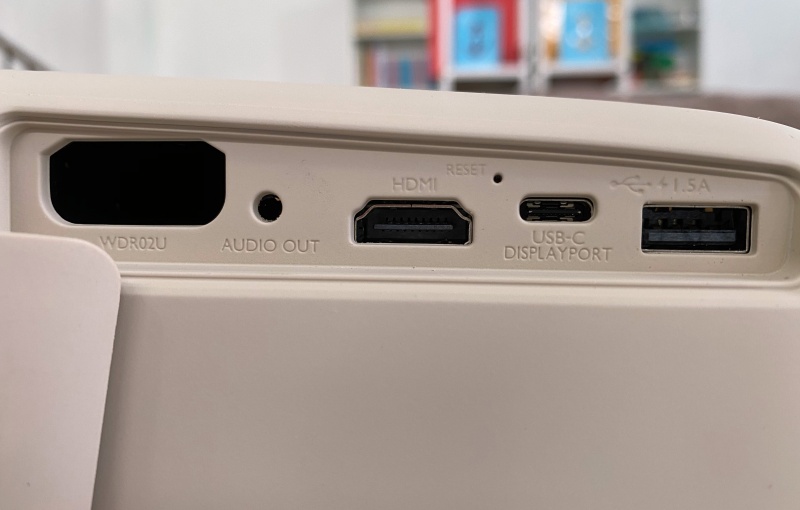 It also comes with several popular connectivity options. USB Type-A to hook up storage devices, DisplayPort support over USB Type-C and full-size HDMI for video output as well as support for Wi-Fi on the 2.4GHz and 5GHz bands. Note that wireless connectivity support is enabled by the provisioned WDR02U USB dongle so it's safe to say that the dongle is likely to be sticking out of the BenQ GS2 for most of its usable lifespan. Had it been integrated within the housing of the GS2, there would be one item less to pack and the whole package would have been more self-sufficient. 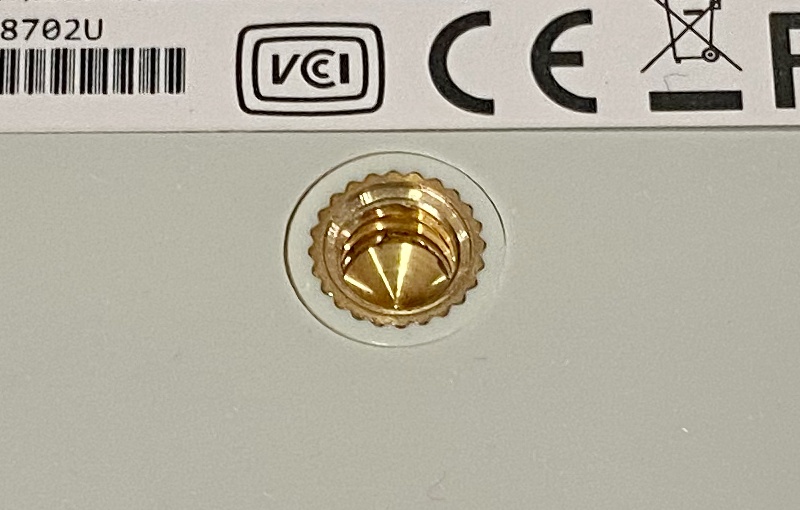 One nice feature I liked was the threaded hole in the base so I could mount it to a stand like a tripod if I needed to prop it up without relying on furniture and finding a suitable spot to make it work.

The DLP projection engine is rated for 500 lumens output using lamp-free (no maintenance) LED light source, and with a fixed throw ratio of 1.3, it can project an 80-inch screen size 2.3 meters away or up to a 100-inch screen size from about three meters away. With no optical zoom, you will have to move the unit around to fill the projected space to your taste. For a little help, the GS2 has a built-in height tilt at its base to better nail the right level of projection. Take note that the projector's native resolution support is only 720p, but it can process any 1080p video if your concern is merely about video material compatibility. As you can tell, this projector is meant for spontaneous, fun and spur-of-the-moment needs and kids as opposed to a home theatre buff. 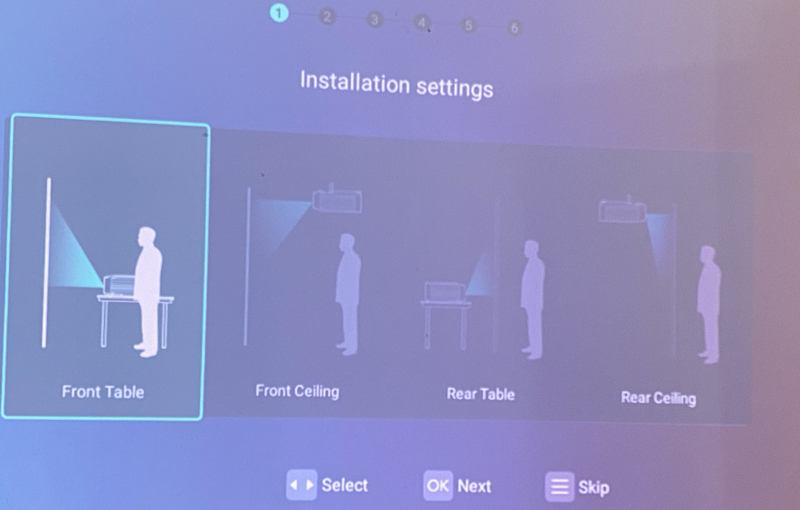 When you first turn it on, there are some simple setup instructions you can follow. Or you can skip straight to the “action”. Parents can also lock it down to prevent any “unauthorised or unapproved” use.

I set it up in my kids’ room to take advantage of a long weekend to watch some animated movies. Rather than a proper screen or bedsheet, we just used a blank wall and found that it worked fine. This is the exact kind of use BenQ intended for quick and fun usage wherever you need to deploy the projector around the home. 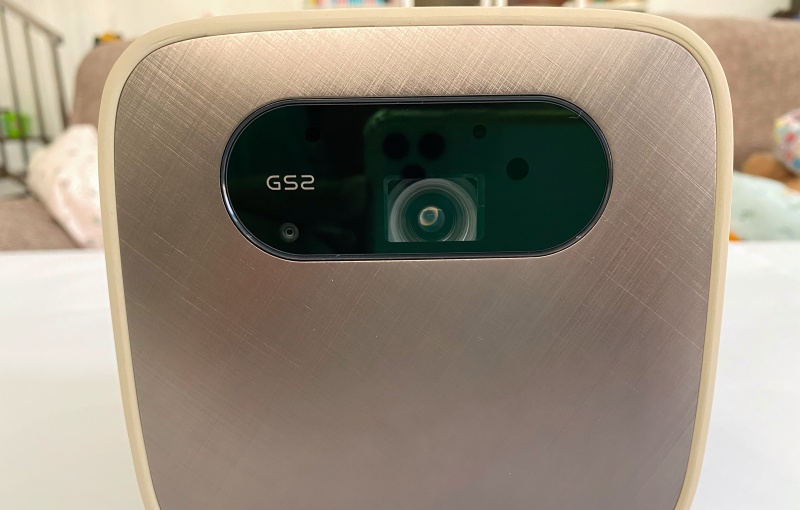 Designed with families and children in mind, the GS2 has an Eye Protection sensor that shuts down the LED light automatically if it senses anyone in front of it trying to look in, to protect their eyes from light damage. While interesting, I didn't really test it as I didn't want my wife to scream at me for trying to blind our kids., but it is nevertheless a thoughtful feature BenQ packed in to protect curious kids. 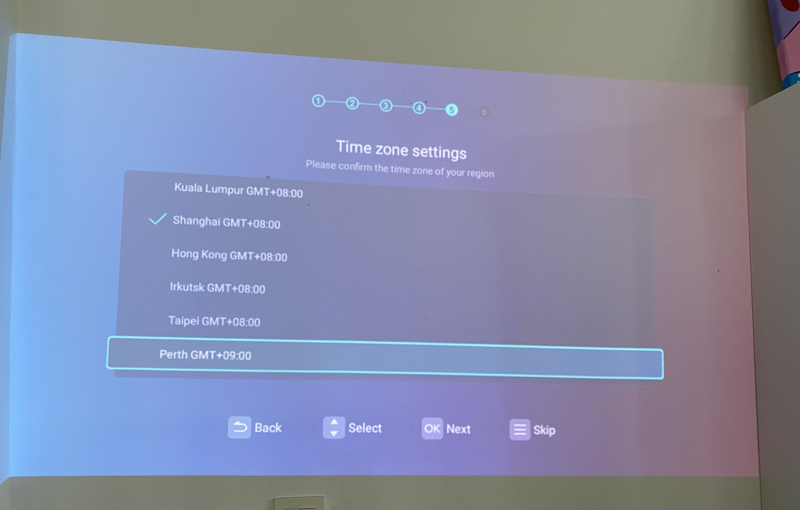 There are a number of “smart technologies” to make the GS2 user-friendly. LumiExpert technology detects ambient light levels to automatically adjusts the projector's brightness output to a reliable level, so you don't need to tinker about for optimal output. The GS2 is also endowed automatic autofocus that actually works well and works fast. This can be turned off in the settings if you need manual tweaking, but automatic should do the trick for most needs.

Watching it in the afternoon was somewhat acceptable as long as the sun wasn’t shining directly onto the projected wall. Needless to say, some detail was lost as compared to watching it at night when it was darker and its rated 100,000:1 contrast ratio could be better appreciated. 500 lumens output is not very powerful to overcome a bright day, but it is enough when deployed in a small room and definitely reasonable for nighttime usage. Hopefully, BenQ will find a way to increase brightness output in a future model for even more flexible usage.

The video above was taken during the day in a room with little darkness. As it was an animated movie, it shouldn't have had to stress the imaging capability on the GS2 too much. Still, there was some notable jerkiness while streaming this video over Wi-Fi as I screen mirrored off my MacBook Pro. Watching the same video stored off a thumb drive connected directly to the GS2 was smoother.

Viewing faster-paced content with more action, or more colour transitions might result in greater momentary pixelation or artefacts. As mentioned earlier, the native resolution is a puzzling 720P, but it accepts video signals with up to 1080P resolution. These days with more compact 4K projectors making their way indoors at palatable price points (even if they only manage digital upscaling to that resolution), this does somewhat limit the potential of the BenQ GS2 at face value. 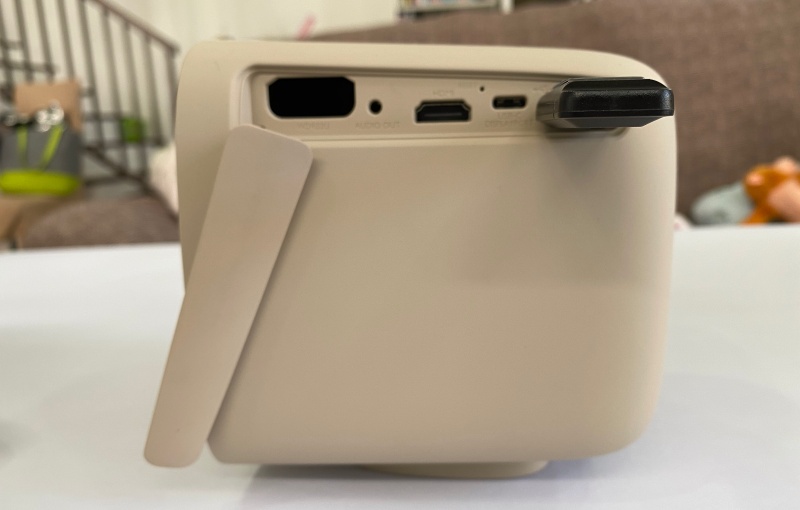 Moving on, I connected the BenQ GS2 directly to my faster home network and streamed some content over from my laptop. Fortunately, picture and sound quality were found to be flawless in this direct streaming mode instead of screen mirroring. Google Cast also worked fine out of the box, but my wife's older iPhone 7 had some issues connecting on Airplay.  The Aptoide app store allows you to install the standard video streaming apps like YouTube, Netflix and Twitch such that you could launch the required service directly on the projector. YouTube ran fine whether launched from the YouTube Aptoid app or streamed over my iPhone. Netflix too streamed eventually after but when it worked, there was little issue with it.

In terms of sound quality, the dual 2-watt chambers of the BenQ GS2 is adequate for use in a small room. But if you want to use it outdoors or in a larger room, I would recommend using a set of Bluetooth speakers for better quality and fidelity. Interestingly, the built-in speakers can also double up as Bluetooth speakers to cast your tunes aloud from your phone. Still, as we just noted, it's advisable to rely on standalone speakers than those belonging to the projector.

At the end of the day, the serviceable performance of the BenQ GS2 is more about packing in everything you need within one cuboid package without looking for cables or other connections to fast track the big screen experience.

Since it’s a go-anywhere device, BenQ says they made it impact resistant and able to withstand a drop of up to half a metre which I was very tempted to try, but I didn’t want to encourage or risk my kids to try the same test on the home TV or computers. Drop protection aside, given the recent rainy weather, I was also tempted to try it outside, but given the IPX2-certification, it is only protected from light drizzle or spilt water, and not torrential rain like a monsoon. 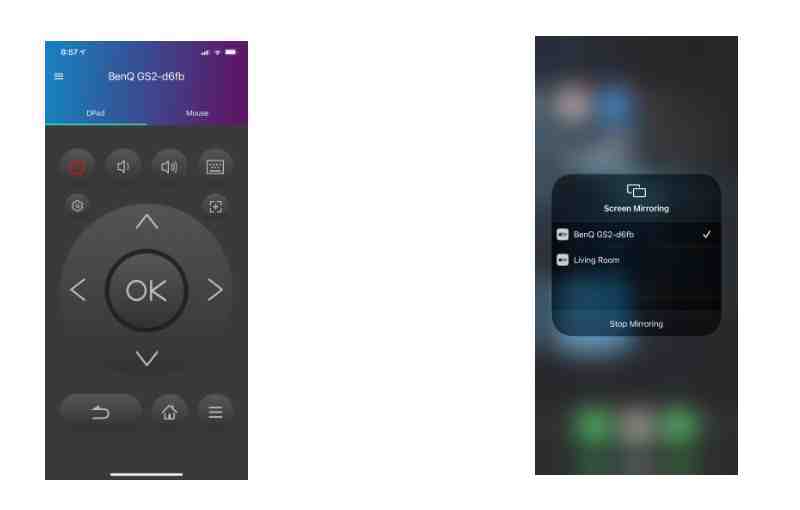 As for the battery-operated performance, BenQ claims it has a battery life of three hours. We watched The Secret Life of Pets and the The Secret Life of Pets 2, and we did need to swap over to the wired power supply more than halfway through the second movie. Given that the total runtime of both the movies combined is just about three hours, BenQ's battery performance claim does come close.

Now about that wired power cord, BenQ has adopted an Apple MacBook Pro-like MagSafe power connector wherein the power cord is designed to instantly detach from the projector in case if it is tugged upon accidentally. Being a portable cuboid and weighing 1.6kg, it is heavy enough to gain momentum and hurt children should it accidentally roll off the table. So while the magnetic power charger head easily snaps to the projector to juice it up, it is also just as easy to dislodge, intentionally or unintentionally.

If you’re after a home cinema experience on a big screen, then, of course, look for a proper home theatre class projector. But if you need a portable, splash-proof, drop-proof projector offering a quality viewing experience via a host of casting and connectivity options, the BenQ GS2 is hard to beat for these combined traits.

At S$849, it isn't the cheapest option, especially when you look at the resolution support alone. There are cheaper, more basic projectors out there. There are also some with native 1080p resolution handling capability or louder speakers. But, the GS2 is a compromise. It comes packed with features and connectivity, and the flexibility to suit young families looking to use it around the home, or outdoors, or take it on a camping holiday. Its kid-friendly features are probably its star highlight if you can overlook its projected resolution.

If the all-in-one package is what you've been looking for, it is available now at Benq's official store on Lazada. 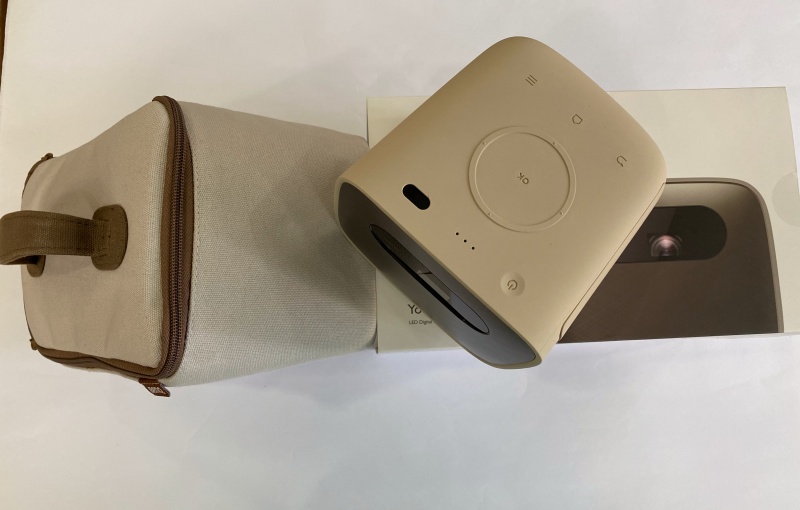 Write a Review
Compare This | Specifications
User friendly
Good connectivity options
Go anywhere in almost all conditions
Drop and spill protection
Built-in battery and speaker
Smart features
Stylish carry bag
Pricey for the specs
Needs to be a little brighter
Audio is only serviceable
Separate wireless USB dongle
Connectivity can be a problem with some devices
Our articles may contain affiliate links. If you buy through these links, we may earn a small commission.
Sponsored Links