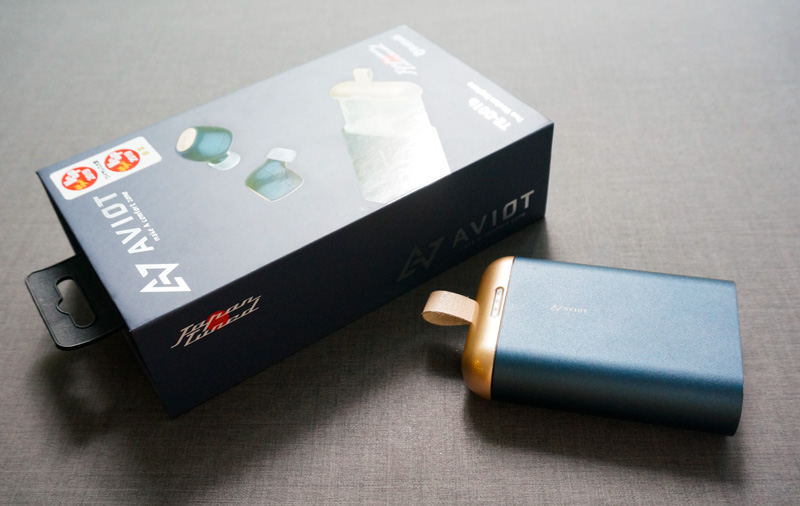 Until recently, you probably wouldn’t have heard of AVIOT (Audio Visual Internet of Things). Their first true wireless earbuds – the TE-D01b were crowdfunded on Japanese platform “Green Funding” and easily surpassed their target of one million yen, with 1,718 backers putting up almost 30 million yen (~S$383,896).

Supposedly created in response to the decline of Japanese audio makers (along with the rise of Chinese and Korean brands), the earbuds are also said to be specially tuned by Japanese audio experts to properly reproduce the vowels and sounds of the Japanese language, which is why AVIOT proudly says the headphones are “Tuned in Japan." 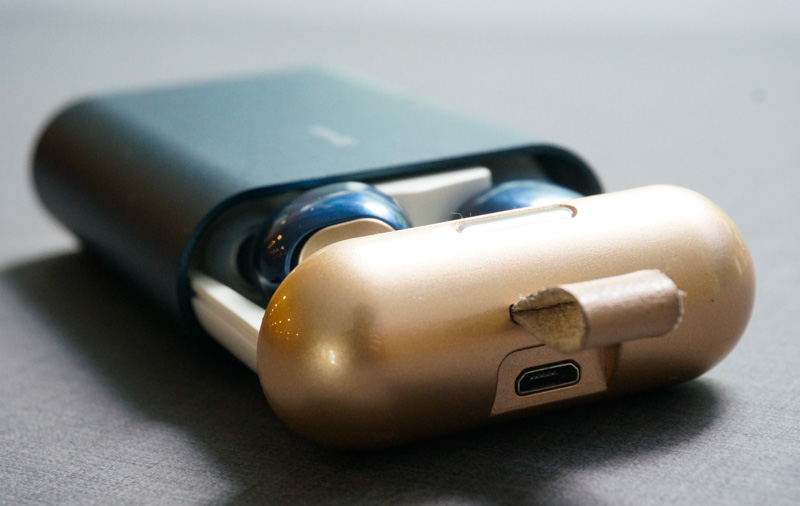 Of course, that doesn’t mean you can only use these earbuds to listen to audio in Japanese. The website says you’ll enjoy all genres of music with these – whether it’s a light acoustic piece or a heavier electronic dance track.

Something interesting is that the earbuds employ Qualcomm’s QCC3026 Bluetooth Audio System-on-Chip, which was built specifically for true wireless applications. This allows for a more robust connection, and reduces power consumption by 50%.

Perhaps because of that, the earbuds boast a battery life of nine hours per charge, with another eight charges coming from the battery case. That’s a whopping 81 hours of playback in total! 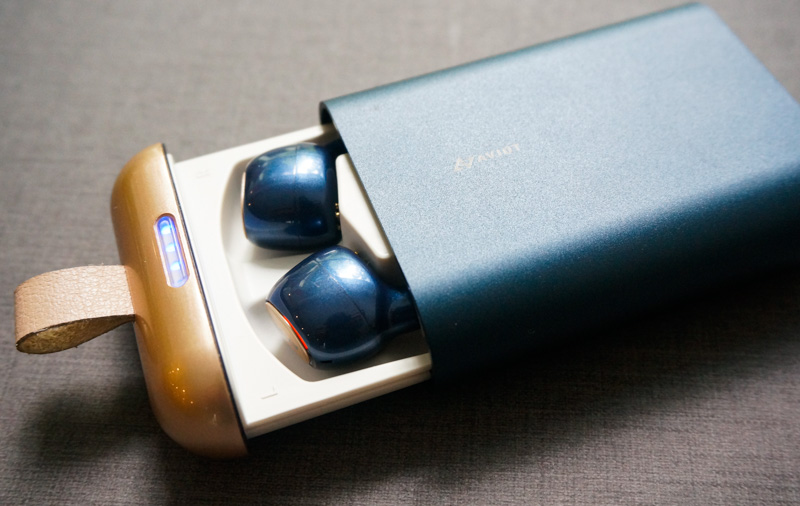 The TE-D01b comes in three colours – Black, Gunmetal, and Navy. Our review unit is in Navy, and as you can see, both charging case and earbuds are navy with gold accents, which make for quite an attractive combination.

As you can see from the image above, the case features a slide-out design with four LEDs in the drawer to indicate charge level. It measures about 8.5 x 5.5 cm, and so is a little too lengthy to fit comfortably in your pocket, but that’s the trade-off you make for the extended battery life. 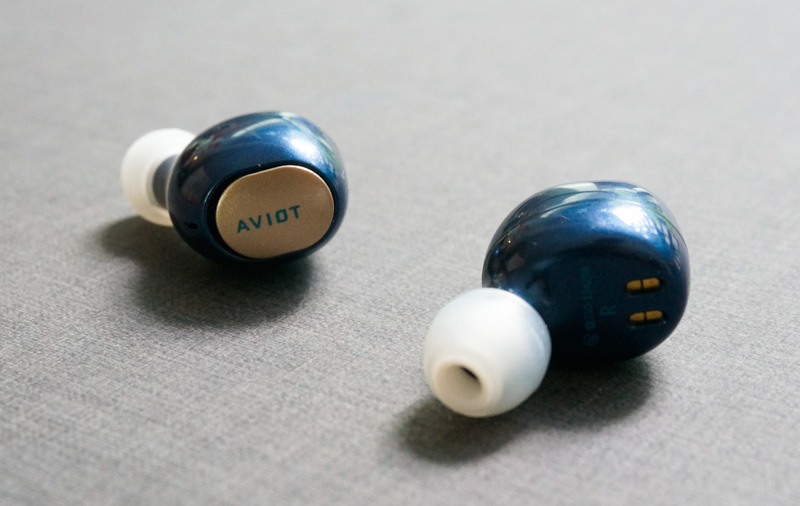 These are silicon tips that use an ergonomic concave design at the core so the tip can swivel in your ear, making for a better fit. That’s a nice touch that not only ensures that the earbuds better stay in your ear, but also helps improve the overall listening experience as you get a better seal. 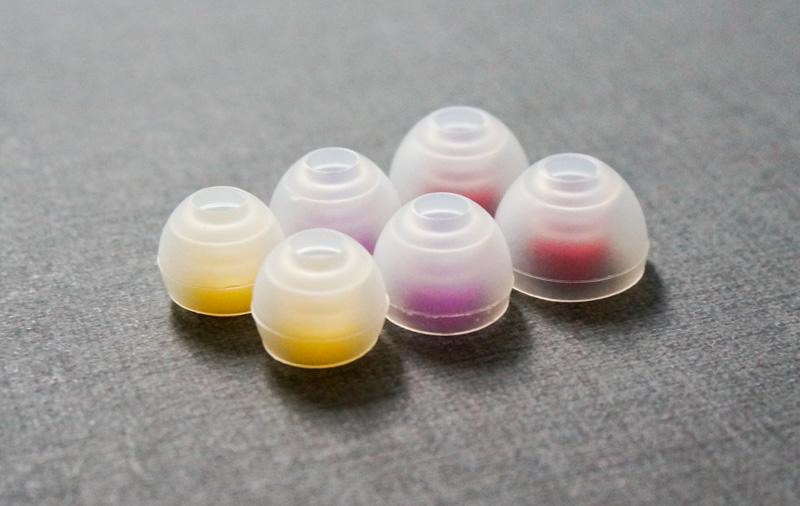 Like the Sony WF-1000XM3, The TE-D01b supports the simultaneous transmission from your player to both earbuds, so any lag between earbuds is eliminated. What's different though, is that the TE-D01b seems to work well with both mobile phones and portable players, as we didn’t experience the same drop in volume we encountered with the Sonys when paired with our FiiO M7 .

As with most true wireless earbuds, you’ll get basic playback controls on the earbuds. Single tap to start/stop (with a single beep) or hold for three seconds (and wait for two beeps) to go forward or back.

Your phone will connect to whichever earbud is taken out of the case first. If you have multiple devices, you’ll be pleased to know the TE-D01b can store up to eight devices in memory, so you won’t have to go through the pairing process all over again. It’s also IPX7 rated, so you won’t have to worry about getting caught in the rain.

We started our testing off with a recording of Live and Let Die by Guns N' Roses and found that the earbuds picked up the ring of the strings in the intro well, with good weight on Axl Rose's vocals. The transition from the acoustic intro to the main rock portion of the song is quite swift, but the TE-D01b handles this one, showing good dynamics for the earbuds.

Moving on to Lose yourself to Dance by Daft Punk once again reflected the balanced nature of these earbuds. The bass on these isn’t deep, but there’s just enough to move the track. We thought the earbuds also displayed good naturalness on the claps and the vocals in the track, as well as a good sense of stereo imaging.

Finishing off with a recording of Fireopal by Ottmar Liebert turned out to be most satisfying as the guitar work in this track falls mostly in the mids and highs. With this, the TE-D01b provided good clarity, so you can really hear every note as well as the Liebert's fingers as he works the strings.

Overall, you get good details throughout the audio range, with sharp highs and clear mids. Bass response isn't huge, so you won't get booming bass, but the earbuds still manage to reveal a good amount of detail in the lower ranges. 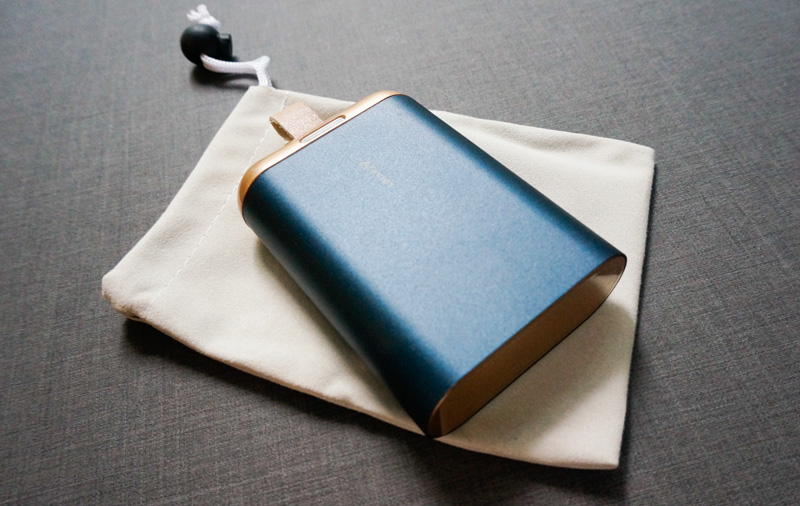 For just S$239, there's really little more you could ask from the TE-D01b. Audio performance is great, battery life is stellar, and the included accessories provide plenty of value. After all, not only do they throw a set of SpinFit tips on top of a set of regular silicone tips, they also throw in a canvas drawstring pouch to keep the metal carrying case protected from scratches.

Certainly, the only glaring omission is perhaps active-noise cancelling, and that would definitely push up the price and bring down the battery life. It's a little disappointing that we still experienced the occasional drop-out during our testing, but these incidences were few and far between. Overall, the TE-D01b has established itself as one of the best true wireless earbuds we've tested.

If you're convinced and keen to get a pair, they are available by popular local retailers on Lazada and on Shopee.

Don't fancy Japanese sound? Here are some other options to consider:

Write a Review
Compare This | Specifications
Great audio performance for a true wireless earbud.
Good details.
Good set of included accessories.
Great battery life.
IPX7 rating means you can use them even in the rain.
Stores up to eight devices in memory.
Bass response is on the thin side.
Carrying case is heavy.
Carrying case is too long to fit in your pocket.
Our articles may contain affiliate links. If you buy through these links, we may earn a small commission.
Sponsored Links