Taking the PC world by storm, millions of small, inexpensive notebook computers have been shipped since the ASUS Eee PC first started the trend. This has only accelerated in 2009, with research firm Abi predicting that 35 million of these netbooks will be shipped this year, with the number rising to 139 million in 2013.

Currently, most of these devices are powered by Intel's Atom, a low-power, low-cost processor highly suited for this entry-level market. While there are a few variants of the Atom, a particular model, the Atom N270, a single core processor running at 1.6GHz, has been the de facto choice for most vendors when it comes to these portable devices.

What is less known, is that Intel has had a dual-core version of the Atom (Atom 330) since June last year. It was however available in limited quantities back then, but we expect to see it being used in many more systems this year. Meant for low-power, PC desktops dubbed nettops by Intel, these devices are designed to be capable of basic computing tasks like surfing the Internet, checking email, etc. Unlike its mobile counterparts, these systems have been markedly less popular in retails among vendors and consumers, though some enthusiasts have been quietly building these systems themselves as inexpensive file or home servers. On the OEM side of the business though, these inexpensive nettops are just about right for a vast majority of systems that are potentially deployed for basic functions and are steadily gaining traction in the background. 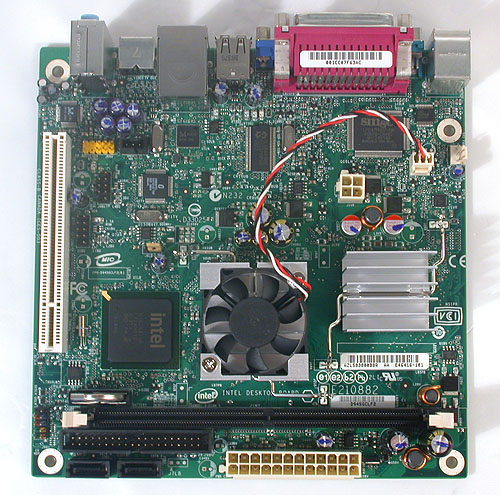 Recently, we managed to get one of these dual-core Atom kits sold by Intel for system integrators and vendors. Consisting of the dual-core Atom 330 processor soldered onto a mini-ITX motherboard based on Intel's 945GC chipset, this is what Intel calls the D945GCLF2 desktop solution. Before we get to the details, here are the specifications:-