Speed and power. Men's insatiable lust for the two, and the desire to be the world's fastest and most powerful have led to wars. And not many are as intense and fierce as the one between ATI and NVIDIA.

Just last year, ATI snatched title of world's fastest graphics card from NVIDIA with their dual-GPU Radeon HD 4870 X2 from NVIDIA's single-chip GeForce GTX 280. This prompted a fierce response from the green camp, and it came in the form of the dual-GPU GeForce GTX 295. The GeForce GTX 295 was fantastic card in many aspects, because not only was it blazingly fast, it was also launched at a lower price than the competition. That's a huge double whammy in our books.

Lately, the tables have been turned. ATI has launched their new Radeon HD 5000 series to great success (although we hear availability of these cards are poor, no thanks to yield issues at TSMC), and NVIDIA is still sitting on the sidelines with nothing really noteworthy to show yet (besides the still shrouded Fermi).

The Radeon HD 5870 might be the fastest single GPU yet, but it is not the undisputed single fastest graphics card. While it is certainly a match for the GeForce GTX 295, it doesn't exactly beat it.

More firepower is needed and that's exactly what ATI is giving. Deviating from the usual "X2" suffix, the new Radeon HD 5970, codenamed Hemlock, is ATI's biggest, boldest and most powerful graphics card yet. The Radeon HD 5970 essentially squeezes two Cypress XT chips onto a single GPU, and as such the card boasts a whopping transistor count of 4.3 billion, 3200 stream processors, 160 texture mapping units and 64 raster operator units. This makes the new Hemlock card, the most powerful graphics card in existence. 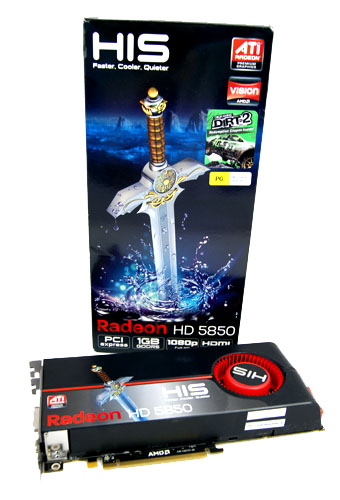 Join us then as we take a look at the kind of performance you can expect to get from a graphics card packing so much firepower under its cooler. But first, a quick look at how it stacks up against current high-end graphics cards just in raw specs:-