As numerous reviews and benchmarks have shown, the highly anticipated ATI Radeon HD 2900 XT (R600) has not been the world-beater that some enthusiasts have been hoping for. With NVIDIA dominating the fledgling DirectX 10 scene so far, having a decently competitive ATI for balance's sake is probably a good thing. However, given the complex architecture of the R600 and the constraints imposed by its 80nm manufacturing process, going directly against NVIDIA's extravagant but powerful GeForce 8800 Ultra is foolhardy and unlikely to be successful. Hence, ATI has been forced to concede the performance crown for now and has targeted the more manageable GeForce 8800 GTS instead with the Radeon HD 2900 XT.

While there will be no doubt some loss of prestige and brand awareness as a result of not obtaining the pole position, yet as analysts will tell you, the high-end is usually not where the majority of the profits are derived. It is the mainstream cards that will be found in more systems, particularly from the big OEM builders. More importantly, with the rapid growth of the notebook segment (with a corresponding slowdown of the desktop PC market), it is the mobile versions of these mainstream SKUs that are usually featured in notebooks. In short, the money is in the potentially huge volume of the mainstream segment, for both desktop and mobile versions.

This is the focus of today's article, where we have managed to get our hands on a budget Radeon HD 2400 XT from PowerColor for benchmarking. Representing the 'pinnacle' of the low end DirectX 10 series (Radeon HD 2400 series includes a slower Radeon HD 2400 PRO) from ATI, this graphics card will be available shortly (practically all the major graphics vendors had them on display at the recent Computex 2007) and already there have been sightings of these cards on the Internet. Based on a 65nm process, the GPU of Radeon HD 2400 XT uses a RV610 core with a relatively modest (by modern GPU standards) transistor count of 180 million. The main characteristics of ATI's current DirectX 10 graphics architecture are all present, with features like Avivo HD technology, integrated HD audio controller, HDCP and HDMI support, a hardware tessellation unit and new anti-aliasing modes. You can refer to our article on the R600 for more architectural details, as they are mostly similar for all the Radeon HD series. 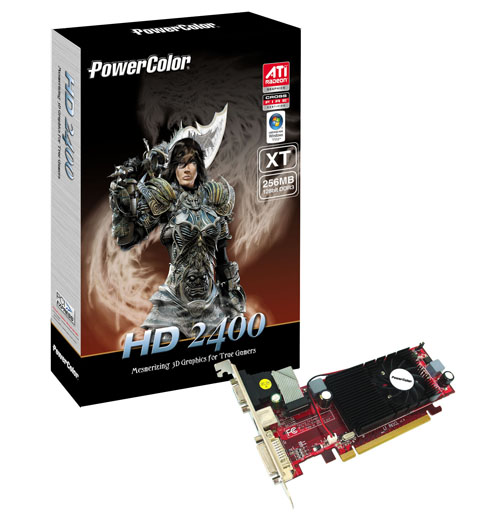 What it does not have is the distinctive ring bus memory architecture; ATI has replaced this with a suitably low-end traditional 64-bit memory bus that may put it at a slight bandwidth disadvantage against NVIDIA's typically128-bit memory bus based cards in the upper range of the entry-level GeForce 8 cards like the GeForce 8500. The general-purpose stream processors are drastically reduced in number compared to the high-end Radeon HD 2900 series, only 40 instead of 320. Memory frequencies are also expectedly lower, with our Radeon HD 2400 XT card clocking 1400MHz DDR and using DDR3 chips. Naturally, with its smaller core and transistor count, power consumption is rated far lower than the Radeon HD 2900 XT at a very nice 25W. Below is a summary of the specifications of the Radeon HD 2400 XT as compared to some current and older competing products (which will be included in our benchmarks later).