The ASUS ZenFone AR comes with a Qualcomm Snapdragon 821 quad-core chipset, backed by 8GB RAM and 128GB storage. According to ASUS Singapore, these component choices are sufficient to power the phone’s AR and VR content properly – we agree that it works well, generally speaking.

We’ve also noted (in our Overview section) that the Snapdragon 821 processor is a 2016 chipset, while flagship smartphones from April 2017 and later are now touting the current-gen Snapdragon 835. Even with an impressive RAM allotment and fairly generous storage space, we believe that the Zenfone AR will be up against very fierce competition at its asking price.

As it is ASUS’s most technologically adept phone to date, we will compare it to others with similar hardware, or rivals with similar price tags. The ZenFone 3 Deluxe is also included in our comparisons for reference.

SunSpider JavaScript measures the browsing performance of a device when processing JavaScript. It not only takes into consideration the underlying hardware performance, but also assesses how optimized a particular platform is at delivering a high-speed web browsing experience. The ZenFone AR was certainly fast at loading news sites and e-commerce sites we’d usually visit. Quadrant is an Android benchmark that evaluates a device's CPU, memory, I/O and 3D graphics performance. Take this benchmark with a grain of salt, because both the U11 and XZ Premium massively underperformed here. Also, the ZenFone AR underperformed when compared to the less powerful ZenFone 3 Deluxe, when it’s supposed to report numbers that are closer to the LG G6 instead. 3DMark Sling Shot is an advanced 3D graphics benchmark that tests the full range of OpenGL ES 3.1 and ES 3.0 API features including multiple render targets, instanced rendering, uniform buffers and transform feedback. The test also includes impressive volumetric lighting and post-processing effects. We're running this benchmark in Unlimited mode, which ignores screen resolutions. The ZenFone AR performed better than we expected, as it’s ahead of the LG G6 (which is also equipped with the Snapdragon 821 chipset). The ASUS ZenFone AR uses a 23-megapixels resolution Sony Exmor RS IMX318 sensor for its rear shooter. That’s the same sensor found on the ASUS ZenFone 3 Deluxe and the Xiaomi Mi Note 2. It’s further supported by a six-element lens with an aperture of f/2.0, 4-axis Optical Image Stabilization for photos (shifting and pivoting compensation for both pitch and yaw), and TriTech Autofocus – a combination of laser, phase detection, and contrast detection autofocus that debuted on the ZenFone 3.

Within the default phone app, the ZenFone AR packs 20 shooting modes. Notable ones include Manual (self-explanatory) and HDR Pro, which adjusts the brightness of the resulting photo with its own algorithm. 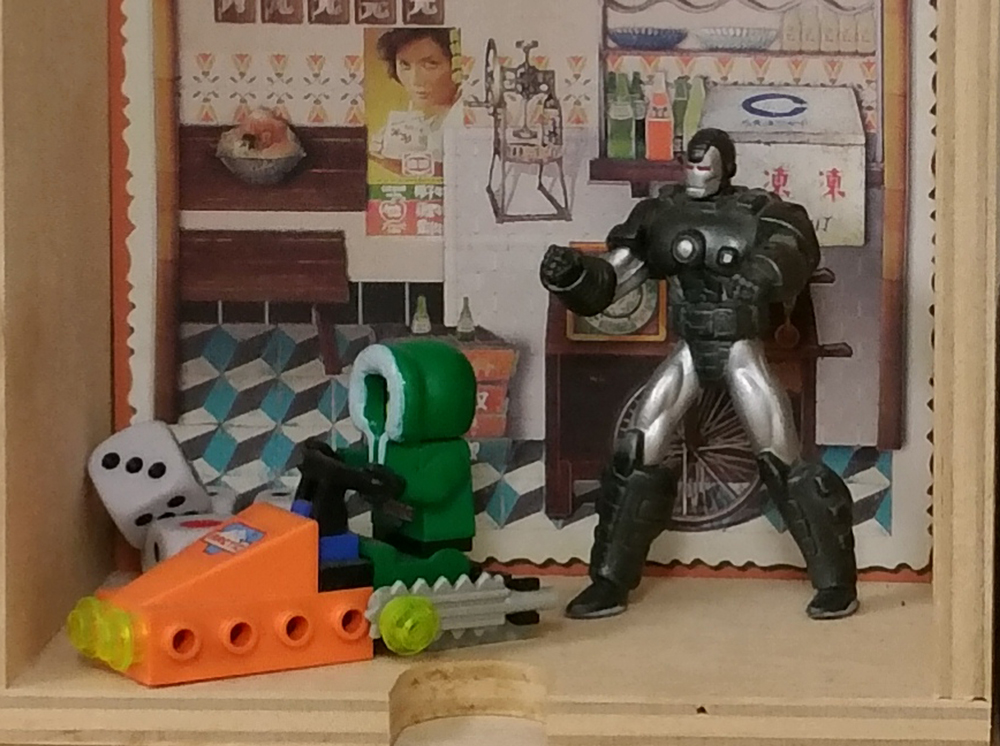 The image quality seems to be on par with what the ZenFone 3 Deluxe offered.  Good points are its color control, and its general attention to detail in the focused area (center of the image, around the War Machine figurine). Like its peer, it suffers from the lack of detail and higher noise levels when you are away from the focused area – the white halo around the vodka bottle is still present even if it’s less pronounced, but it came at a cost of sharpness (check out the embossed logo figurehead and compare it to the image produced by its preceding device). Quality-wise, the imaging is functional, but it's certainly below expectations for S$1,198, seeing how the cheaper ZenFone 3 Deluxe’s image quality was already “a little disappointing”. The ASUS ZenFone AR has 3,300mAh with Qualcomm Quick Charge 3.0. ASUS said that their Snapdragon 821 was specially tweaked to work well with AR and VR, and that would certainly explain the drastic drop in battery life when compared to the 3,000Mah ASUS ZenFone 3 Deluxe. The performance is also on par with the 3,300mAh LG G6, so the findings here are acceptable, even if it’s not the best in its price tier. The ASUS ZenFone AR has an average battery uptime for a phone that does regular smartphone tasks expectedly, and it’s sufficient for performing its intended AR purposes. If we’re looking strictly at the ZenFone range, this is certainly ASUS’s most powerful phone to date, even if it has subpar imaging performance for its class. Moderate phone capabilities aside, the ridiculous asking price begets certain baseline smartphone expectations, which ASUS seems to actively work against on multiple points –they are listed below.

Do you really need AR and VR today?

Google Tango and the augmented reality it provides could have been a unique selling point, but there’s the Lenovo Phab 2 Pro which already offers that at S$300 less (and our Phab 2 Pro review was hardly glowing, either). There’s new, but no groundbreaking AR applications since the Phab 2 Pro. The showcase apps are also impractical, as detailed in our review. Given the phone’s general performance and its niche offering, we were expecting it to compete against the Phab 2 Pro by being better-specced, with better handling, at a better price, instead of being more expensive for very little difference. As a consumer, AR doesn’t offer any immediate practicality, and as a startup app developer, you’d likely go for the cheapest Tango alternative in an attempt to manage limited funds for R&D.

On the other hand, the phone's VR implementation feels better thought-out than AR, but it is still a toy at its current stage of development, so it doesn’t add anything new to the stagnated VR scene for smartphones. The ZenFone AR’s VR is further hampered by requiring buyers to go through third-party Daydream View resellers, increasing its final bill. For ASUS to argue that it’s the only phone to offer both Google AR and VR technologies would require us to factor in the headset as a sunk cost, which is another S$110 to S$150 extra to the phone’s S$1,198 price tag. In comparison, Samsung generously offered a free VR headset for getting their Galaxy S7, and 20% off accessories (like a headset) for getting Galaxy S8 at their respective launches. Furthermore, the current crop of Samsung handsets and next batch of LG flagship phones will get Daydream support too, so you also wouldn’t move away from an S8 to the ZenFone AR if you specifically want Daydream VR.

While other 2017 flagships don’t have that AR ecosystem going on at this depth, they don’t need to, because they offer far more practical features. Huawei P10 may have a similar class SoC to the ZenFone AR, but it costs S$400 less and it has a wicked dual rear camera system. Sony offers a 4K HDR display alongside intersting camera features with up-to-date specs at S$100 less. Samsung and LG are playing their own game with impressive display ratios and appealing build quality at lower price points, while the HTC U11 marks itself as the first true 2017 flagship smartphone in Singapore that’s under the thousand-dollar threshold and has proven to be a good all-rounder. Other Snapdragon 821 phones currently sit around the S$800 price range, but more importantly, they had a better all-round standing even if the unique features are lacking. We’ve also explained (twice) in our Overview and Benchmark Performance sections as to why the phone should not be asking for such a high price. Too little, too expensive and too late?

In a nutshell, the ZenFone AR isn’t a competitive option in the current smartphone climate and to say otherwise would be misleading to our astute readers. As iterated in the beginning, it was a promising handset when it was showcased in January 2017. However, it is debuting in a market where more powerful devices have been around for months. Granted that if you close an eye to the processor used, the rest of the specs on the ZenFone AR still rank well like its nice screen, ample built-in storage, decent audio characteristics and others. The problems with the ZenFone AR start to surface when you start using the device such as its less than appealing handling and design choices - especially, when the basic ZenFone 3 actually feels better than the ZenFone AR that costs more than twice its asking price. While it manages decent overall performance, where it lets its guard down is in the imaging department. It's not bad, but we've certainly experienced better for less. This concern becomes more acute when you consider that imaging ranks very high on smartphone capabilities these days and more so when you pay top drawer price.

So what are you paying for? Basically, only because the ZenFone AR is the first to support both Google Tango, and Daydream VR. But we've already talked about the concerns we've for AR and VR, both from the market adoption perspective and how the device is positioned. If you’re serious about the development of AR, we’d recommend the Lenovo Phab 2 Pro instead since it offers the same key feature from the same developing firm at a much lower price and you've a much larger screen to enjoy the AR effects, which you can personally experience in this local exhibition at the ArtScience museum.

What about for regular phone users? If for some reason you need to have the most 'advanced' handset with AR capabilities to toy around, then yes, we cannot deny that the ASUS ZenFone AR is the best option there is at the moment. For everyone else looking for the next best upgrade, you might want to pass on the ZenFone AR as it's unjustifiably expensive, with unimpressive design and performance when compared to the current crop of flagship smartphones. As such, The ASUS ZenFone AR sadly doesn’t fix the problems left behind by the lackluster ZenFone 3 Deluxe.

Last, but not least, ASUS has only set aside a 100 sets for retail locally and that only confirms its status as a technology showcase model rather than a bona fide option to bolster the ASUS ZenFone lineup - at least in the local context.