The ASUS ZenFone 8 contains the Qualcomm Snapdragon 888 chipset. It puts the phone in the running as a 2021 flagship Android smartphone against competitors with identical chipsets - like the Xiaomi Mi 11 and Oppo Find X3 Pro. Competitors with flagship-tier chipsets built on a similar manufacturing process, like the Exynos 2100, are also up for consideration, pitting the ASUS phone against the Samsung Galaxy S21 series as well.

The ZenFone 8 variant we have on hand also comes with 16GB LPDDR5 RAM and 256GB UFS 3.1 internal storage, which costs S$100 more than the 8GB RAM based model at S$999. This should lend it additional processing power next to all other comparison phones that typically 'only' have 8 to 12GB. 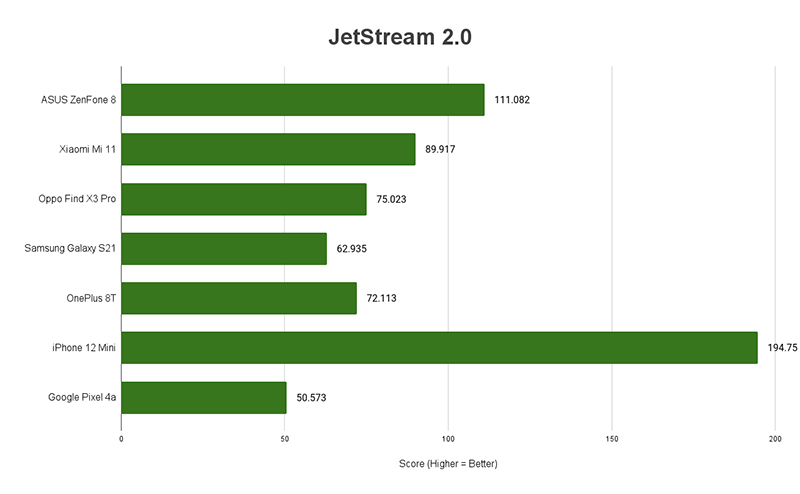 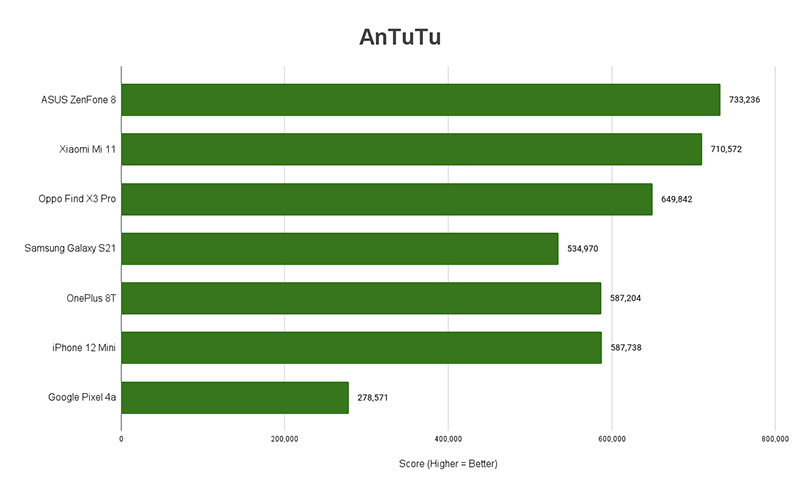 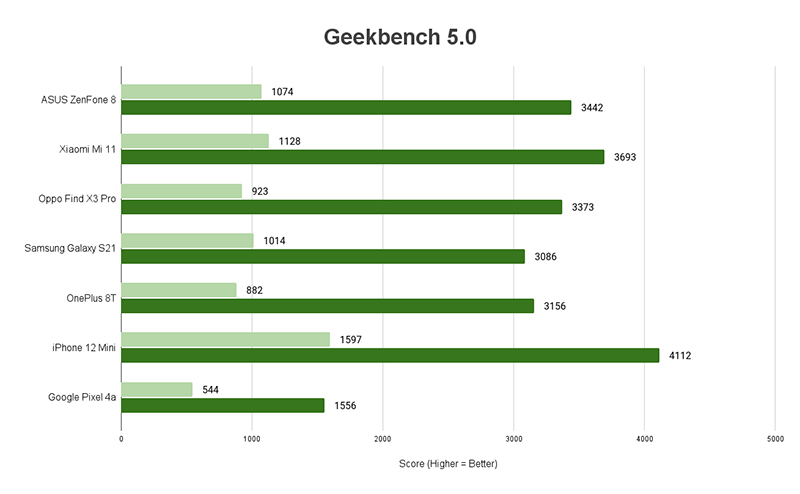 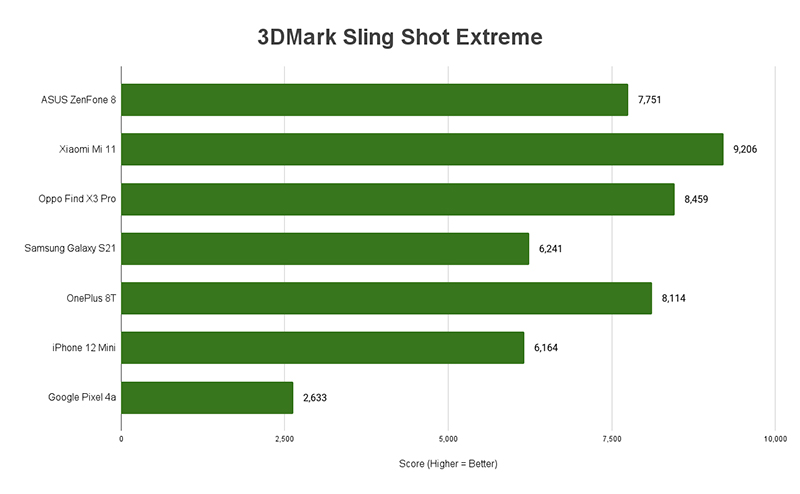 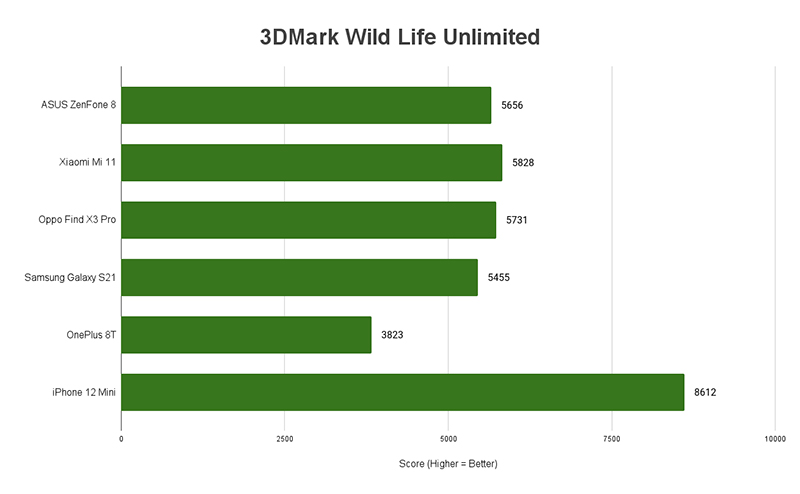 Overall, the ZenFone 8’s benchmark performance is on par with other SD888 touting devices. Sure, it may perform better in certain metrics and worse in others, but all of it evens out to a high-performing 2021 smartphone.

What got us was how ZenFone 8 didn’t let its size get in the way of performing well, which was something we noticed in the Galaxy S21. In real-world usage, any hiccups experienced were down to UI and animation choices - the phone was capable of handling anything we threw at it. 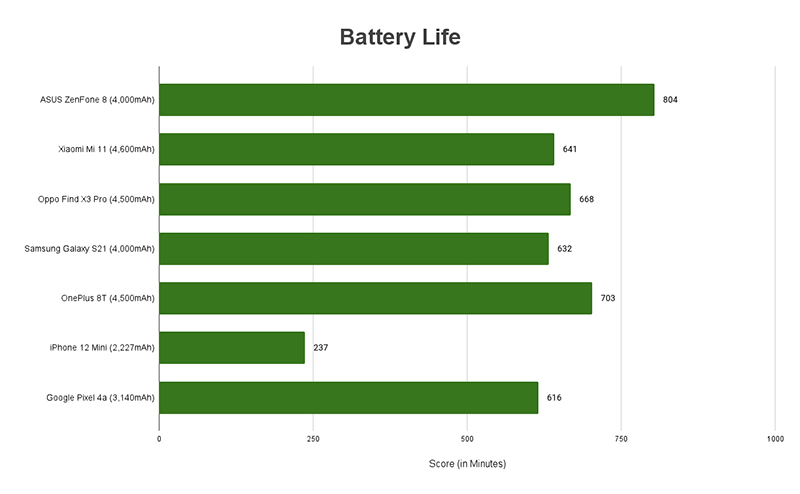 The ZenFone 8 offers a 4,000mAh battery with a 30W HyperCharge adapter in the box for fast charging. The phone offers Quick Charge 4.0 and PD charging profiles, but ASUS didn’t outright state the maximum charging speed the ZenFone 8 has.

We think its 804 minutes of uptime is very respectable. It’s reminiscent of ASUS’s improved battery handling in its past ZenFone models. Having a less demanding 1080p display helps immensely too (the other alternatives like Xiaomi and Oppo on this list were running the test with a 1440p display). The closest rival it has is the Galaxy S21 with similar display specs and a 5nm chipset, but ZenFone 8 was able to get 200 more minutes. Mi 11 and Find X3 Pro’s performance could be chalked up to its higher-rated 1440p display, which likely draws more power.

Fast-charging took only 35 minutes to go from 0% to 50%, but 99 minutes total to go from 0% to 100%. Even with default battery settings, the ZenFone 8 is careful when it comes to fast-charging, where the charging speed tapers off as it approaches a full battery. That said, if you prioritise having a full charge within an hour, you can go into the settings and tweak its battery management features to make it more aggressive.

Noticeably, the ZenFone 8 lacks wireless charging, a feature available in many devices at its price point. 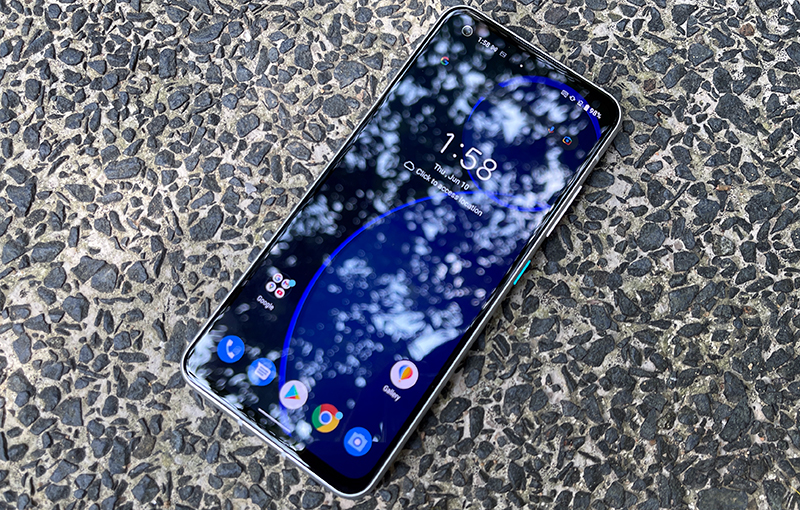 Our gauntlet of tests and our experiences with the ZenFone 8 tells us it’s a good flagship smartphone that feels sensible to use, with performance that’s up to par, along with features of respectable quality - like its battery and camera work. Starting at S$999, the ZenFone 8 would make a great choice if you’re looking to upgrade from a premium midrange phone - more so if it’s an ageing one.

Where it does fall a little short are its other user experiences, which we’ve covered in our Features section and also managed to work around with some effort. It’s also a phone that requires a careful look into its Settings page in order to make it go above and beyond for you, but that also holds true for big-name brands. What really penalises it as a flagship offering, however, is the lack of wireless charging, and perhaps the lack of a telephoto lens - these are trade-offs needed to fit other components in the very small space it has. 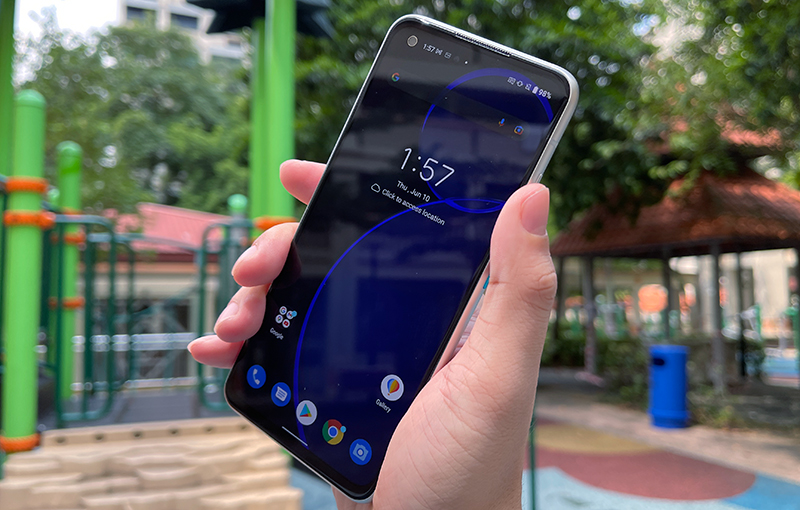 With its price tag, it has to contend with the likes of the Xiaomi Mi 11, and the slightly pricier Samsung Galaxy S21 (which is probably more affordable now, given the passage of time and increased competition). Chipset performance aside, it’s a matter of trade-offs between these three options. Mi 11 has 1440p display when the other two do not, but ZenFone 8 fills an important gap that Xiaomi left out: IP-rated water resistance. Samsung’s Galaxy S21 aces in non-stock Android UI experiences with a similar size to boot, while ZenFone 8 has a much better battery life next to these rivals.

Of course, all these recommendations also consider that you accept and want a palm-sized device as your main consideration. It’s always a choice between a bigger screen against better portability. So, remember to factor in your tolerance between squinting and carrying bulky phones when deciding on the ZenFone 8.

That said, it’s almost unmatched in performance for a phone of its size, since existing smaller or equally small Android phones don’t carry the SD888 chipset as the ZenFone 8 does, and these small phones typically sacrifice battery uptime while the ZenFone 8 tries not to. 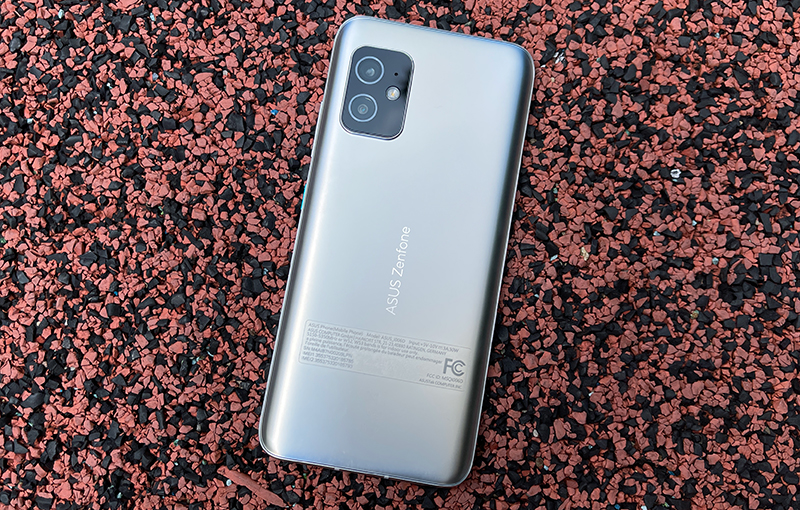 As a whole, the ZenFone 8 is a great phone facing greater competition. It’s also both a good and unique smartphone because of its compact size, worthy features, and palatable price, even if it’s not particularly flashy in any aspect. We welcome having more options in Singapore’s flagship Android space and finally, we can recommend a capable, high-end compact Android phone that's not from Samsung.

The trickier question then is should you choose the ASUS ZenFone 8 or the Samsung Galaxy S21 when hunting for a compact flagship phone? As iterated earlier, the Galaxy S21 has the upper hand in non-stock Android UI experience all through its operating system, a better camera system with its dedicated telephoto lens and a more capable, advanced and yet user-friendly camera interface, wireless charging and a more polished phone design as a whole. Where the ZenFone 8 gets the nod is its overall performance, much better battery life and being a tad more affordable. So it's a matter of which set of experiences do you want more out of your device.