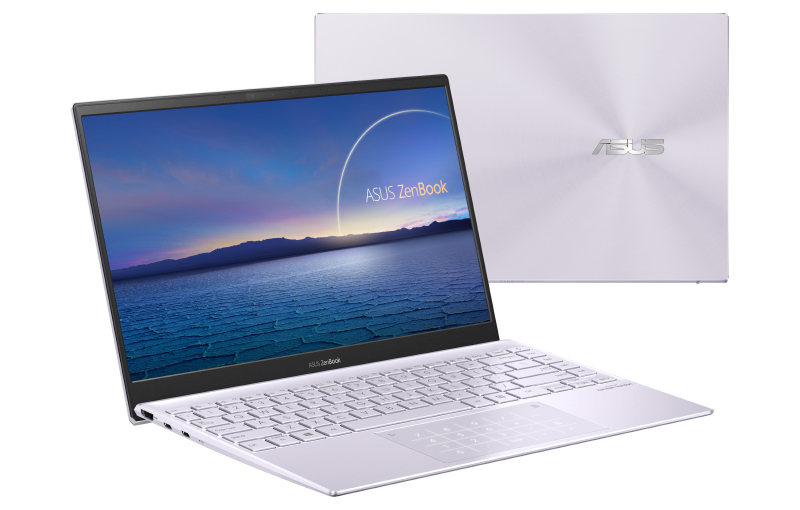 I’ve said it before, ASUS’ ZenBook lineup is maddeningly confusing. I have been covering ASUS and notebooks for years and it keeps getting worse.

Take the ZenBook 14 for instance. There are no less than four models. Not configurations, mind you – there are four distinct models. There’s two Intel models and a further two AMD models. Not only are their processors different, but their dimensions are also slightly different from one another too. Plus, it doesn’t help that their model names doesn't tell users what to expect.

At any rate, the newest addition to the ZenBook 14 family is the ZenBook 14 UM425. It joins the earlier UX425, UX434, and UM433 – told you the model names don’t make sense. The important thing to know about the new ZenBook UM425 is that it’s powered by AMD’s Ryzen 4000 series “Renoir” mobile processor. This family of processors was announced earlier this year at CES 2020 and has been positively received. Today, we are going to see how it performs in a ZenBook 14 and how it compares to the other ZenBook 14 models that we've reviewed previously.

But first, a quick table to summarise the differences between all the models. Now, because the AMD models only come in a single configuration and the Intel models have a couple of configurations, I'm just going to list the configurations that I have tested.

Though the four models that make up the ZenBook 14 family are comparable and similar, they are also distinct in their ways. For example, the UX434 is the only model with a discrete GPU while the UX425 and the two AMD models rely on integrated graphics. The UX434 is also the only model with a 16GB configuration – the rest have to make do with 8GB. And if Thunderbolt 3 support is crucial, only the UX425 has it. It’s hard to say how much of these inconsistencies is down to hardware limitation or a decision on ASUS’ part to differentiate its product or manage costs, but the end result is the same: it’s confusing for consumers. 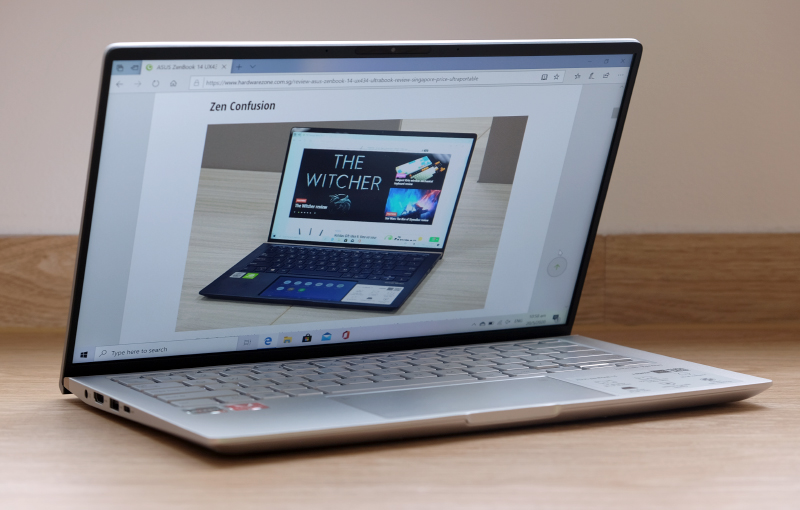 Now, with that out of the way, let’s turn our attention back to the ZenBook 14 UM425. It’s a spec bump update of the older UM433 that we've reviewed, but a significant one because it’s powered by AMD’s new Ryzen 4000 mobile CPUs which have received critical acclaim from most quarters. It also happens to be one of the more affordable ZenBook 14 models so it will be intriguing to see how it fares against the Intel models. In terms of overall design and usability of the notebook, it's very much similar to the UM433, UX434 and UX425 that we've reviewed previously. So without further ado let’s check out the benchmark results. 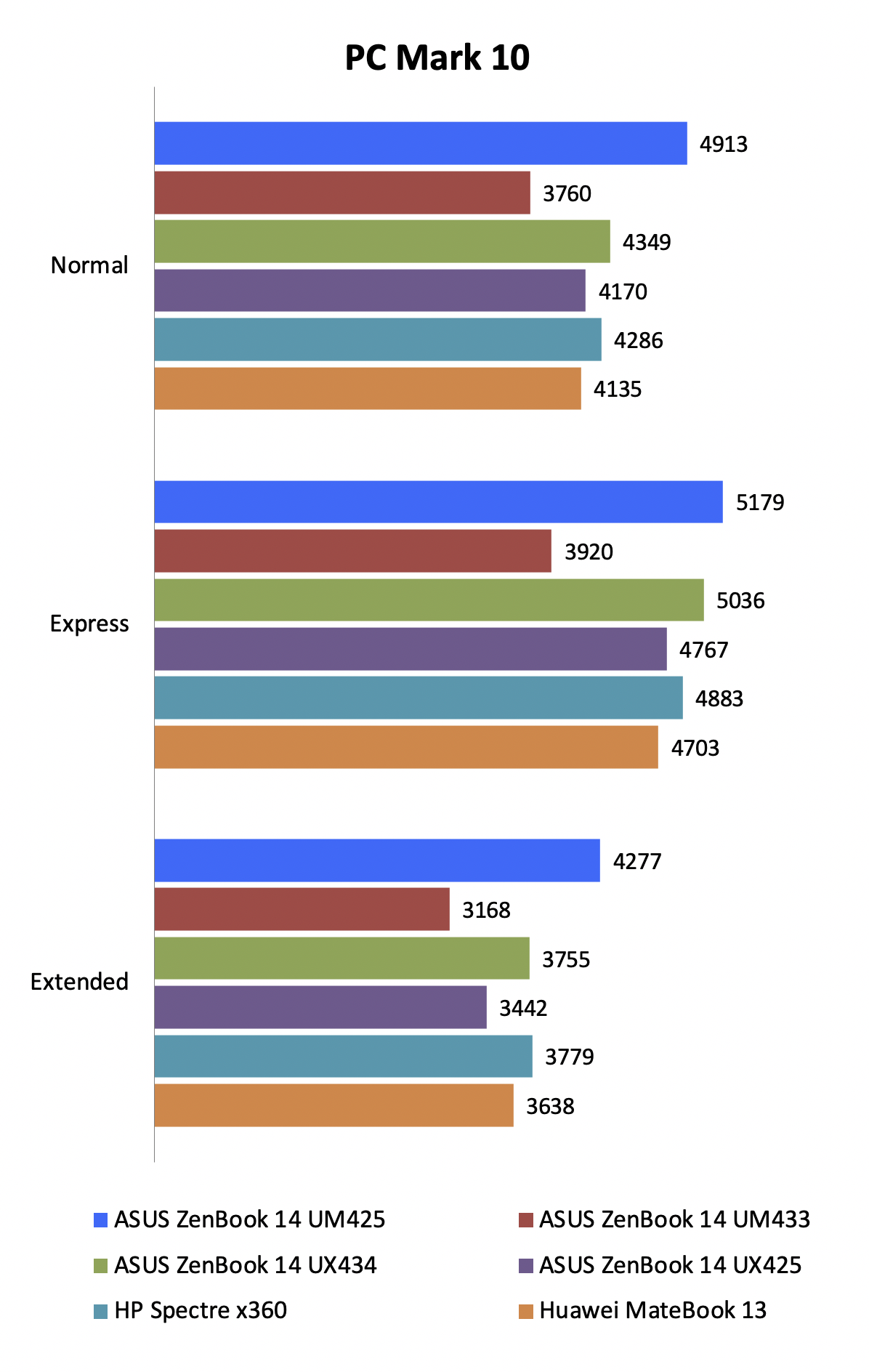 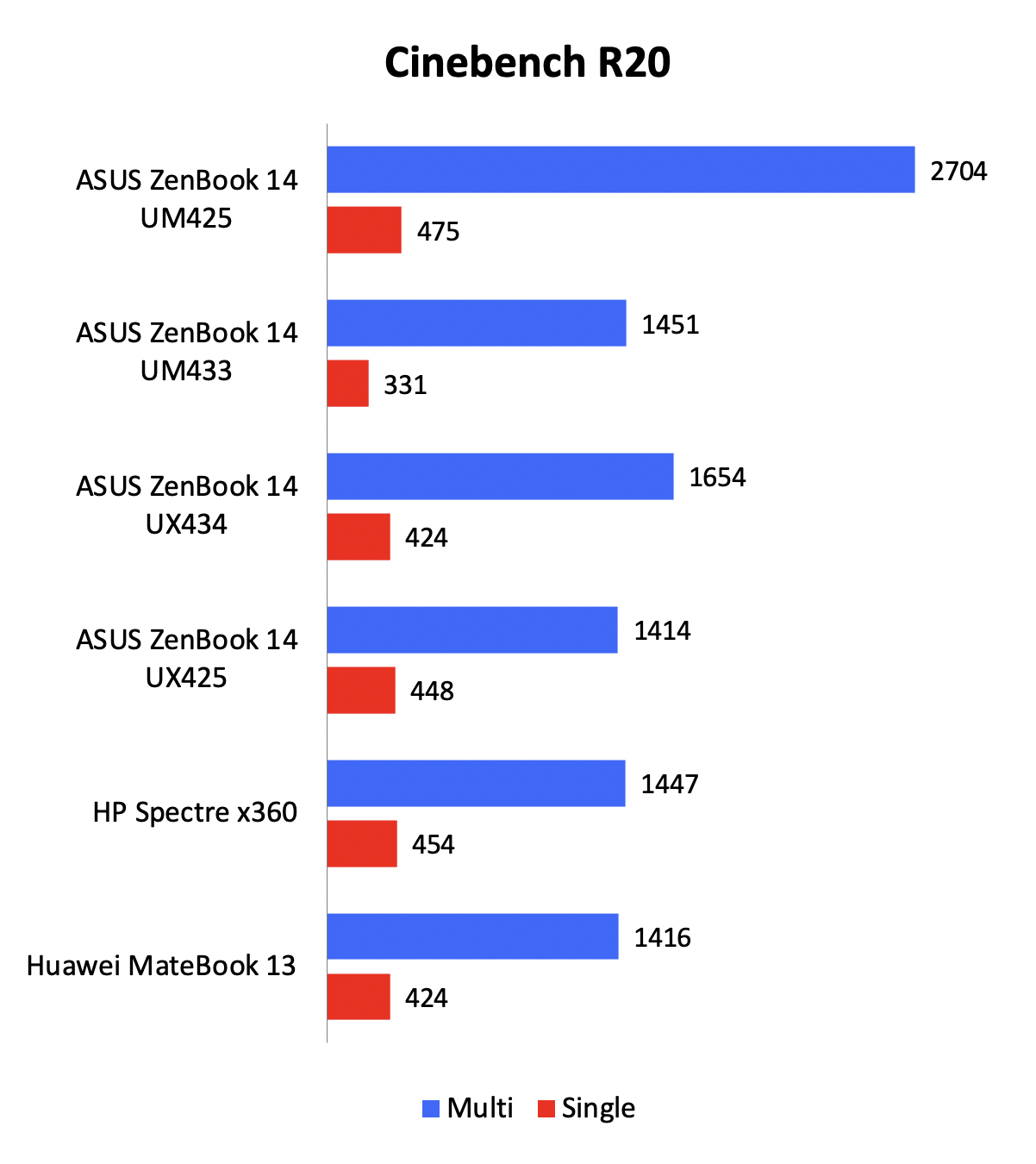 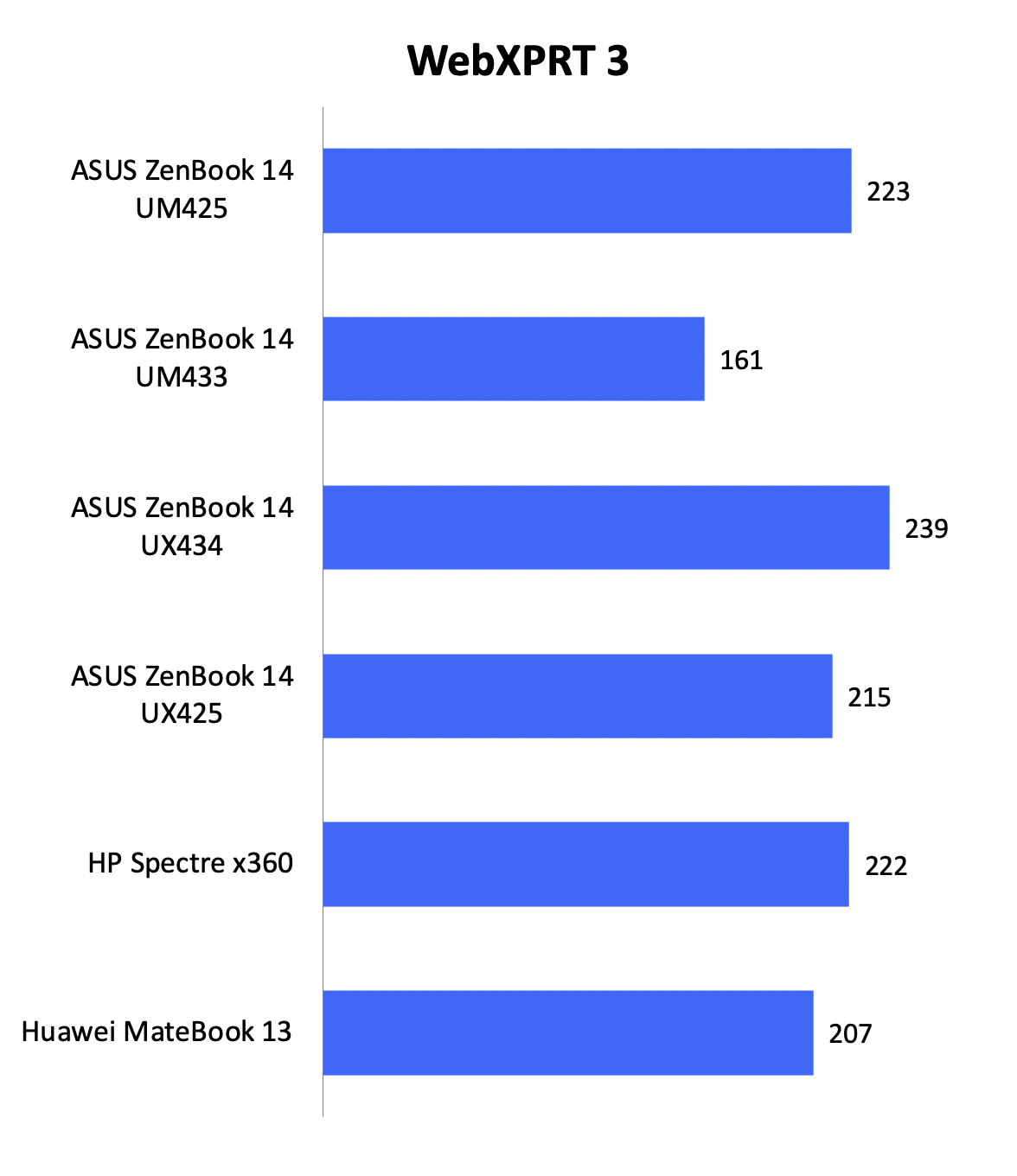 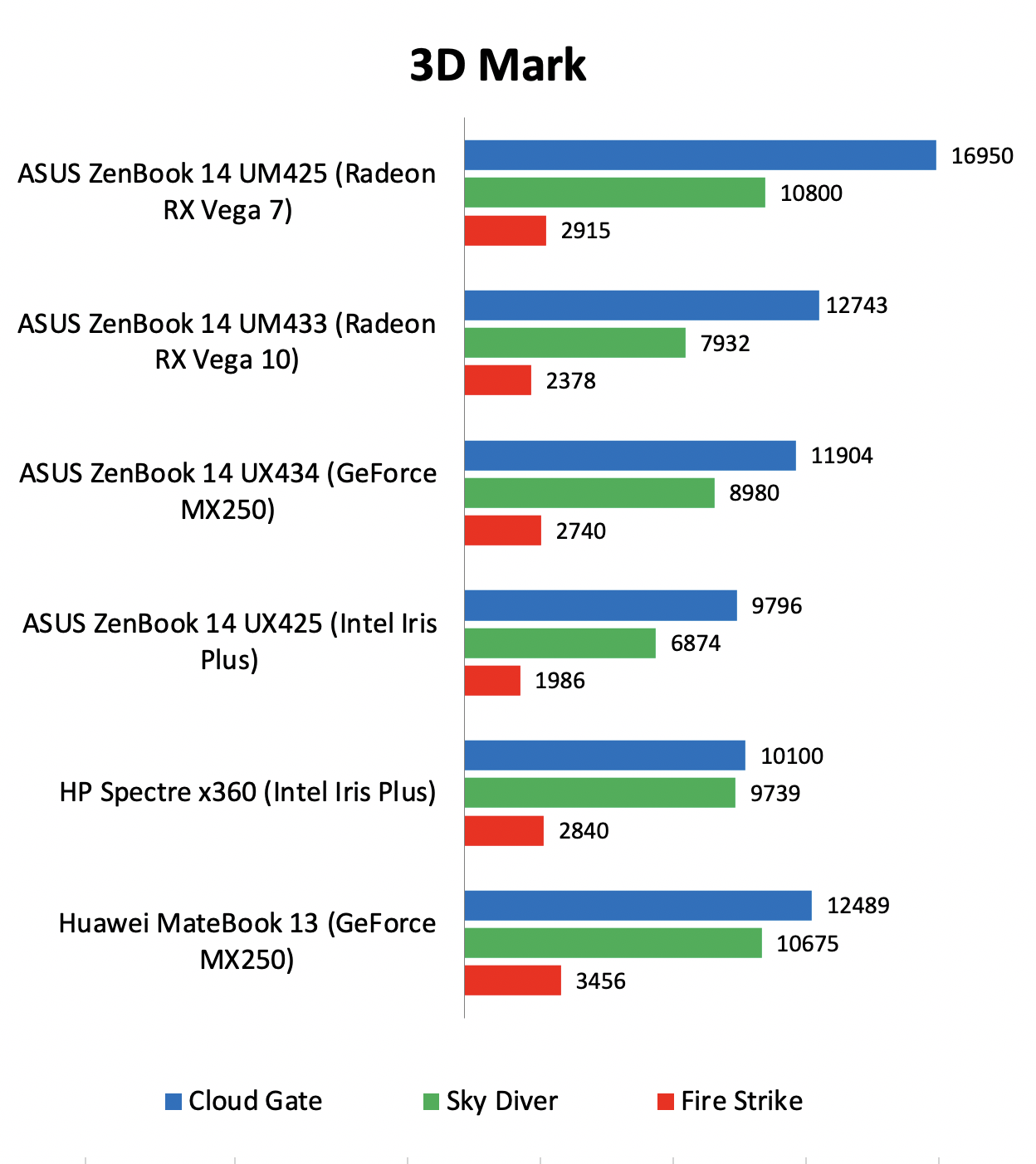 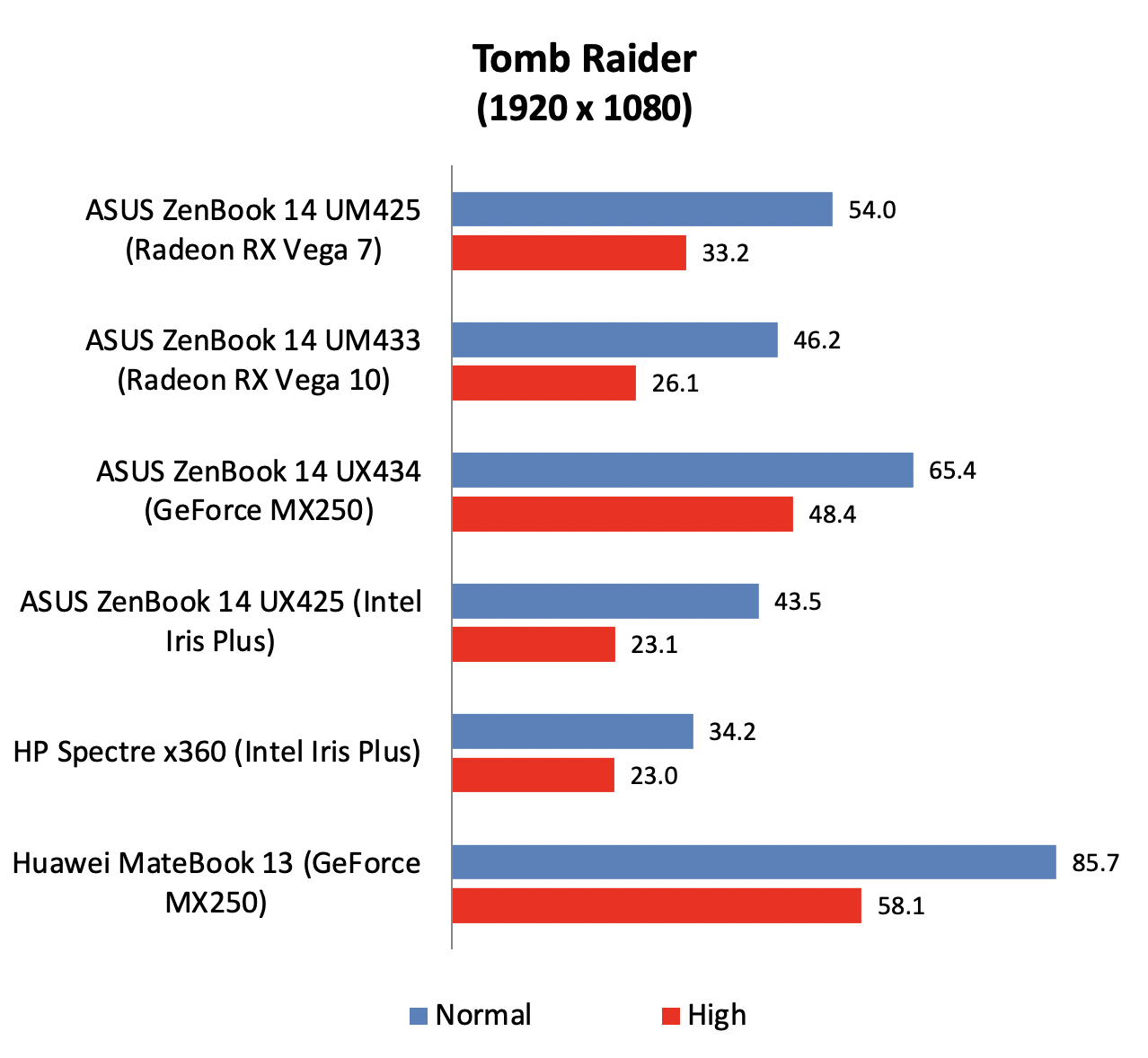 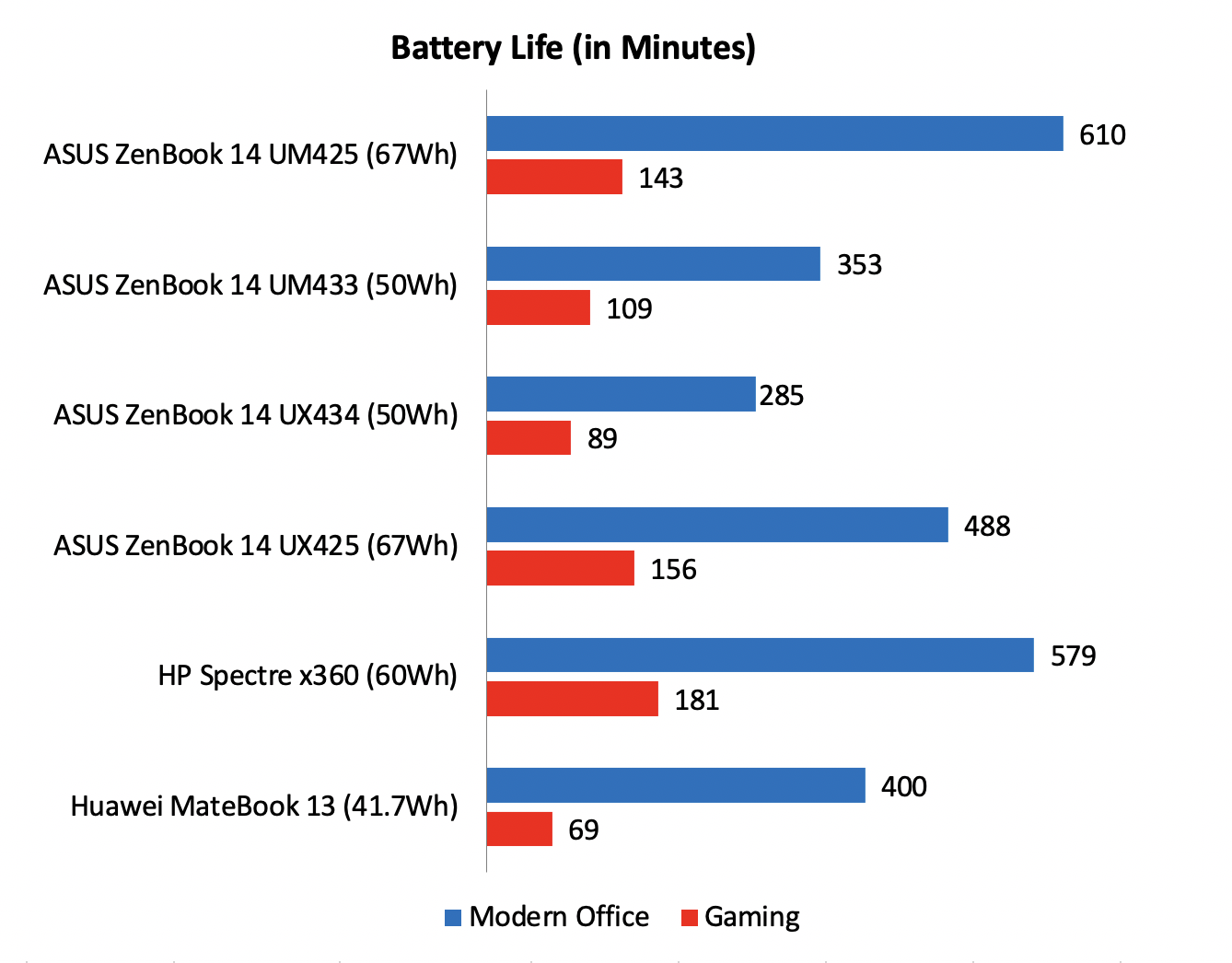 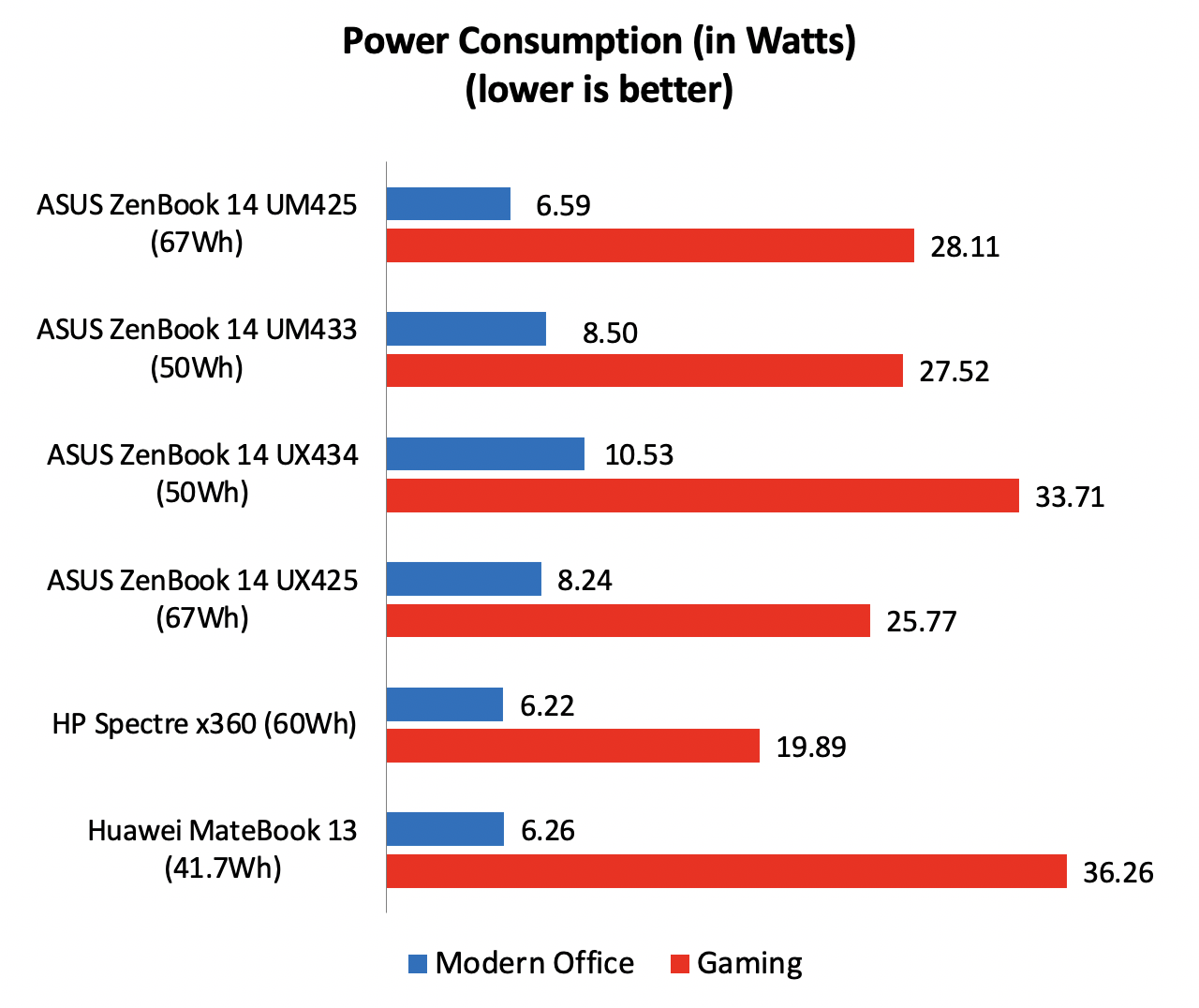 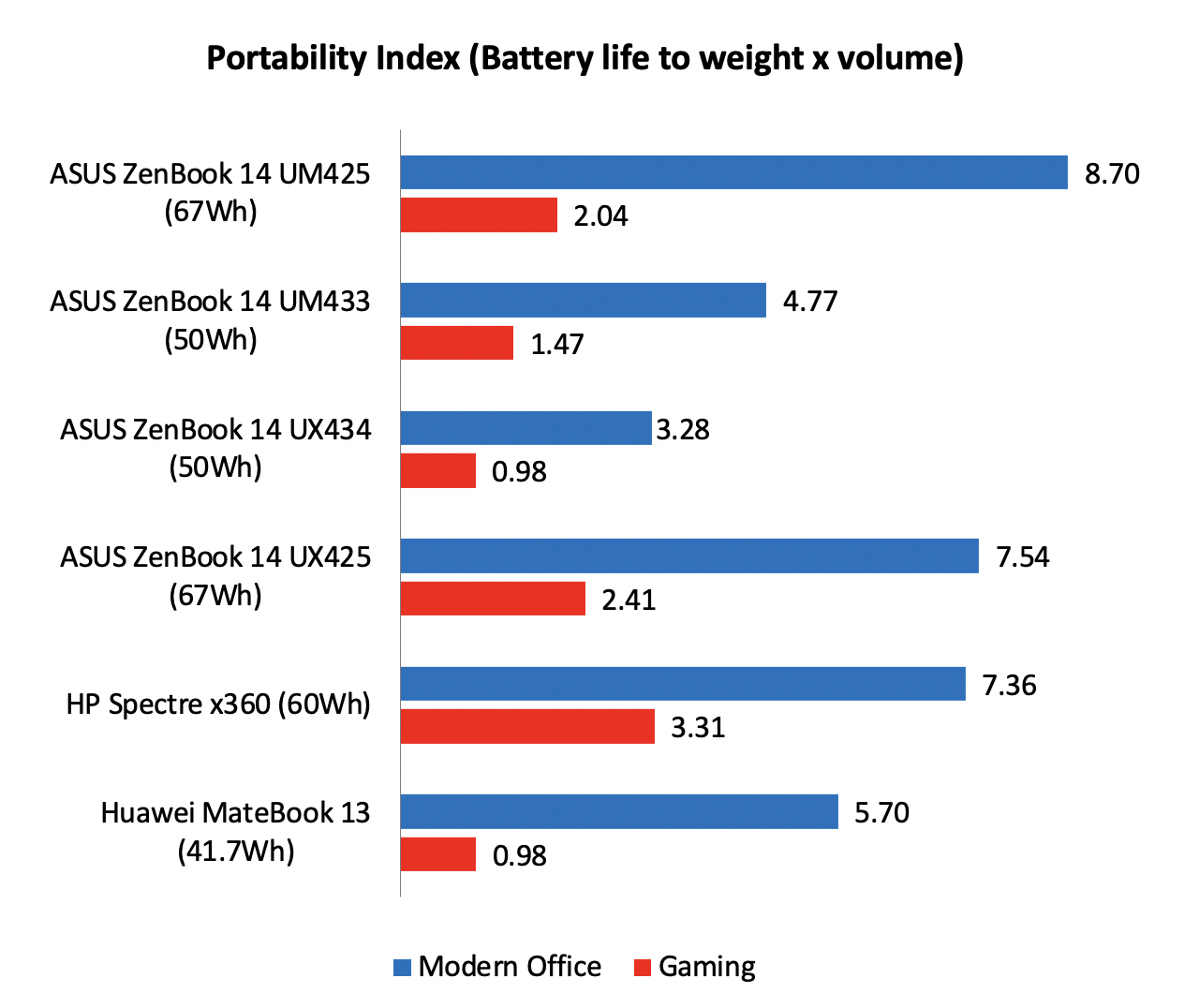 The results are generally impressive. The ZenBook 14 UM425 recorded class-leading results on most of our general computing and CPU benchmarks. It was especially dominant on Cinebench, where its multi-core score was over 60% greater than its nearest Intel-powered rival.

However, I noticed the ZenBook 14 UM425 to be prone to performance throttling. It may clock 54fps on Tomb Raider, but leave the game running for a while and frame rates will dip precipitously. After just half an hour, it was managing just 40.9fps – a decline of around 24%. So, yes, the ZenBook 14 UM425 can be used for light gaming but be sure to temper your expectations. If gaming is important to you, a notebook with some form of discrete graphics is still the way to go for more consistent performance.

Battery life was outstanding as it managed over 10 hours on the Modern Office workload (PC Mark 10) even with the display set to maximum brightness, outlasting the HP Spectre x360 by over half an hour. Even on the more intensive Gaming workload, it lasted over two hours which is noteworthy considering how much performance it offers over Intel’s integrated graphics solutions. 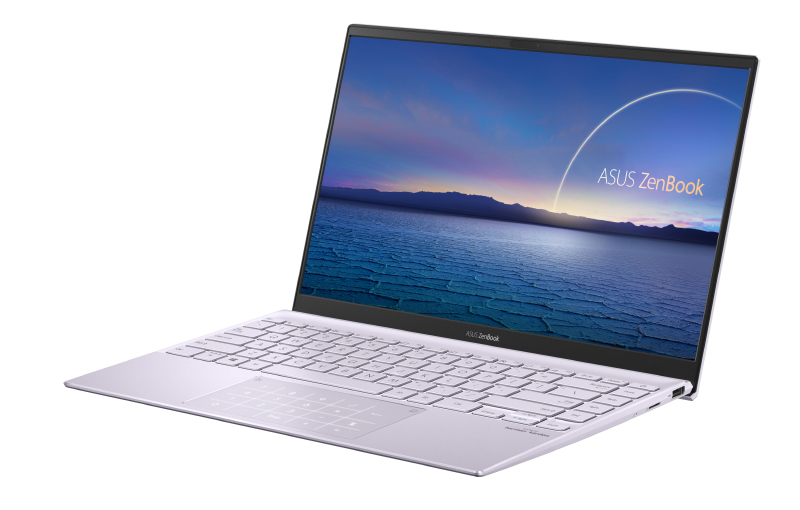 Looking at the charts above, it’s clear that the ZenBook 14 UM425 is an excellent option for anyone who’s looking to get a portable notebook with good build quality, performance, and battery life. It also makes a strong case for being the most value-for-money option in ASUS’ ZenBook 14 lineup. If support for Thunderbolt 3 and discrete graphics are not priorities for you, the choice is clear. 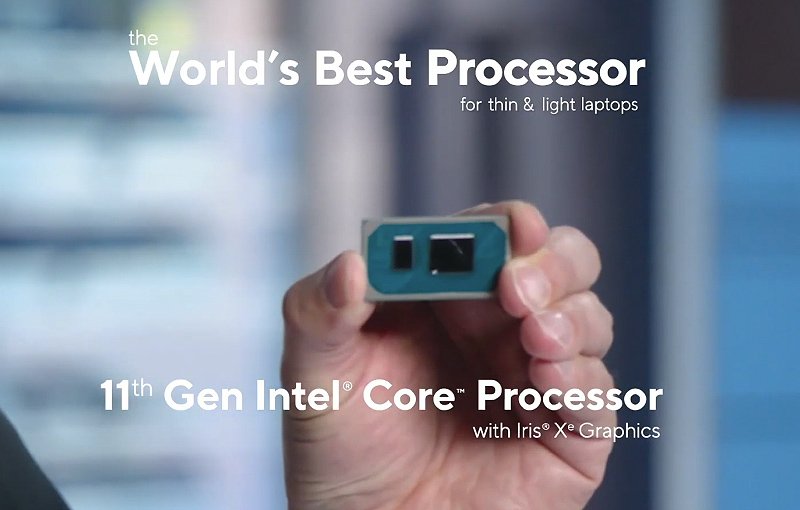 Crucially, this performance review illustrates the advances AMD has made in catching up and even surpassing Intel. However, with Intel having just announced its riposte in the form of its new Tiger Lake processors, the battle is only just heating up.