Very few 13.3-inch Ultrabooks are armed with both an Intel Haswell processor and a discrete NVIDIA GPU - in fact, there's only two: Acer's Aspire S3 (2013) and the notebook we'll be reviewing today, ASUS' Zenbook UX302. The UX302 builds on 2012's UX32 with a fourth generation Intel Haswell fourth-generation Core i5-4200U or Core i7-4500U processor and, an admittedly entry-level, but nevertheless discrete NVIDIA GT 730M GPU. Both Core i5 and i7 models also boast fairly good connectivity with a Mini DisplayPort port, an HDMI port, three USB 3.0 ports, and an SD card reader.

Storage is provided in the form of a 750GB HDD + 16GB SSD cache, which won't be as speedy as a full SSD, but does offer more storage space in return.

The one area where its specs don't quite match up to other premium Ultrabooks is memory, where ASUS has bizarrely skimped out, with just a measly 2GB RAM installed on the Core i5 model and 4GB on the Core i7 model - unusual since RAM is quite affordable right now, and 8GB seems to be the standard these days. It's not even possible to upgrade the RAM, as 2GB is soldered onto the motherboard and, while the other module can be replaced, replacing it with mismatched RAM can cause performance issues, and as such, is generally not recommended.

For this review, we'll be evaluating the Core i7-4500U model which is fortunately equipped with 4GB of RAM - the bare minimum required these days. Before we start, let's take a closer look at the UX302's full specs:

The Zenbook UX302, as well as ASUS' other 2013 Zenbook, the UX301 (which is almost identical but boasts a more powerful processor, higher resolution display and is also more expensive) shares much of the design philosophy of previous Zenbooks, with a tapered, full aluminum chassis and ASUS' distinctive swirl pattern lid. However, instead of the usual silver or grey, this time, ASUS has opted for a classy dark metallic blue color for the UX302's lid, which definitely looks unique and helps it stand out from the crowd. The lid is also protected by a sheet of Corning Gorilla Glass 3, so there's no need to worry about any unsightly scratches. Having said that, thanks to the dark finish, it's an absolute fingerprint and smudge magnet. 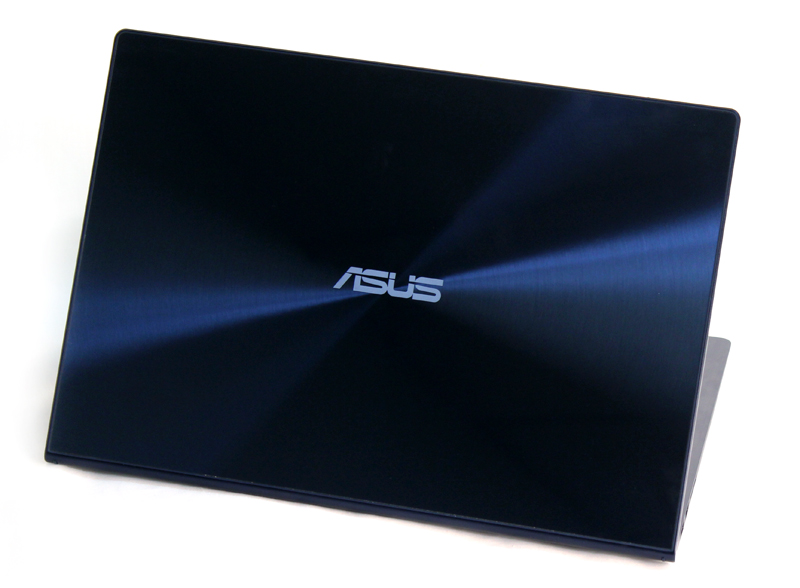 The UX302 isn't as slim or light as the UX301 - due mostly to its HDD and discrete GPU - which make it one of the heavier 13.3-inch Ultrabooks out there, tipping the scales at 1.47kg. It's also not the slimmest model out there, measuring 17.2mm at its thickest point.

As expected from ASUS, build quality is high, and the finishing is top notch, although, we did notice that, even with its Gorilla Glass protection, the thin lid does tend to flex fairly easily, which can be a bit alarming. We don't think it's likely to crack or shatter, but do be careful.

Opening up the notebook, the entire lid is just a tad longer than the body, making it easy to put your finger under and lift up - the lid is also very light, and the hinges are smooth, making one-handed opening very easy.

On the inside, the entire interior is machined from a single piece of brushed, dark grey aluminum. Like other Zenbooks, it's a very clean aesthetic, with no extra buttons, and just a single LED indicator for hard drive activity found in the top right corner. 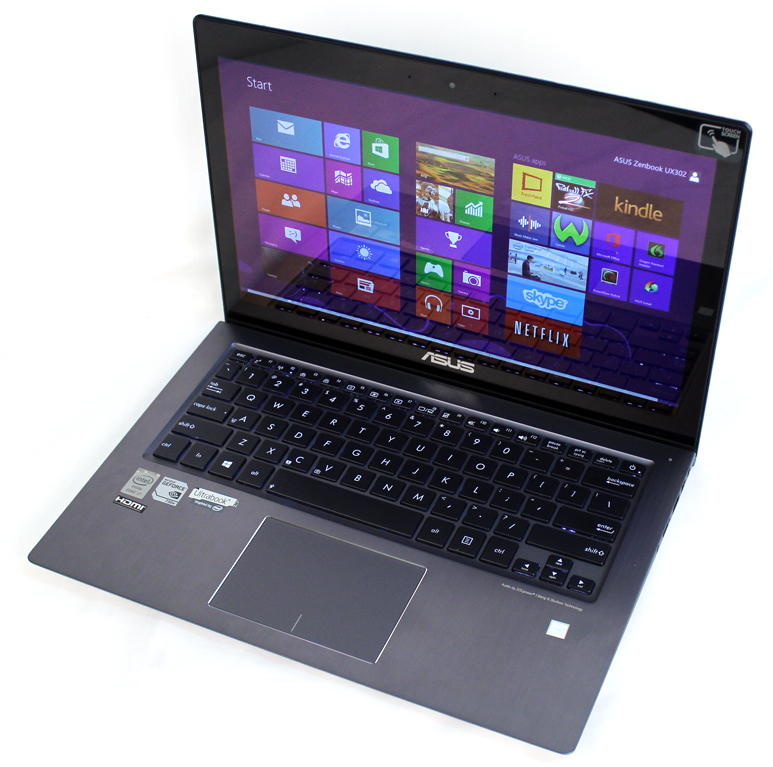 The UX302 is armed with a  Full HD 1920 x 1080 IPS touchscreen display. The screen is reasonably bright at 300 nits, but it does suffer from a bit of backlight bleed around the edges. Contrast is also fairly good at 664:1, although it could certainly be better. Overall clarity and color reproduction is excellent, and the display doesn't exhibit any of the overly saturated colors often seen on other displays.

One issue we did encounter with the UX302's display is its adaptive brightness setting, which is enabled on all modes by default. It functions in a similar fashion to many smartphone displays by using an ambient light sensor to adjust the backlight based on how bright the room is. It's designed to save battery life, and also to reduce glare in a dark room. Unfortunately, the adaptive brightness on the UX302 is a bit too aggressive in its desire to cut power consumption, and almost always sets the backlight too low, even in well lit rooms. 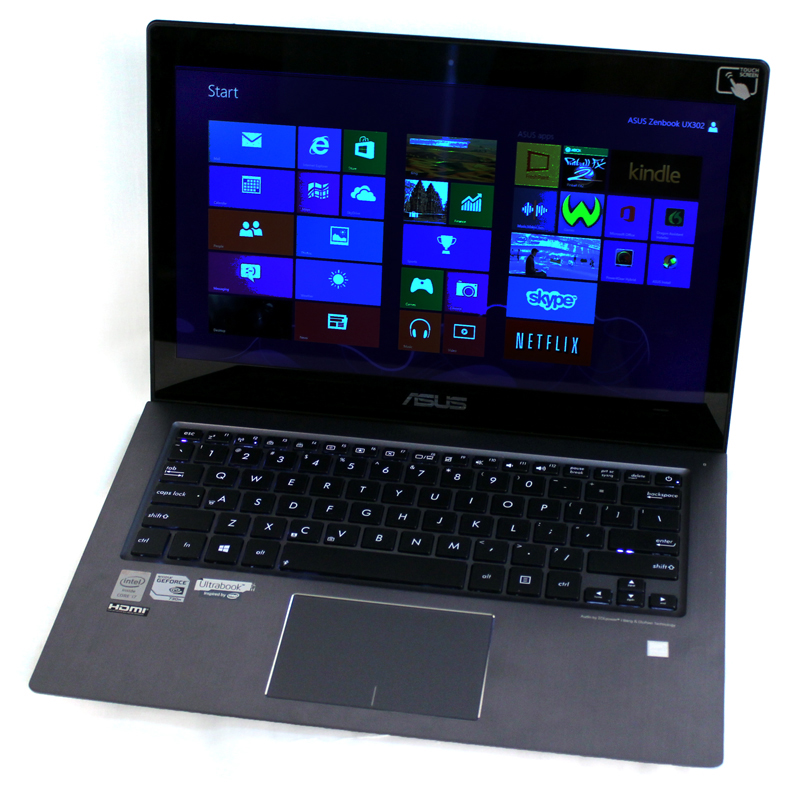 For the most part we found it better to just disable it entirely and manually adjust screen brightness when required: 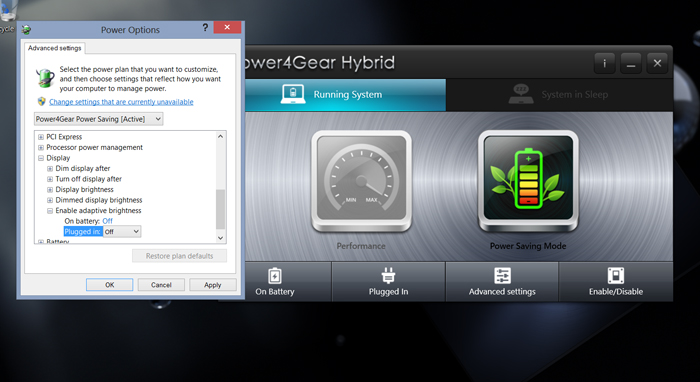 Touchscreen control was good, and the screen feels smoother than most, without the finger burn friction often encountered on glossy glass displays. Poking the screen does cause it to wobble, but the hinges are solid enough that the display won't actually change position unless you poke extra hard. Unlike some Ultrabooks, you can't tilt the screen completely flat, but it does recline quite far.

Audio on the UX302 is supplied via a pair of Bang & Olufsen ICEpower speakers, which are neatly hidden on the on the lower left and right edges of the notebook. 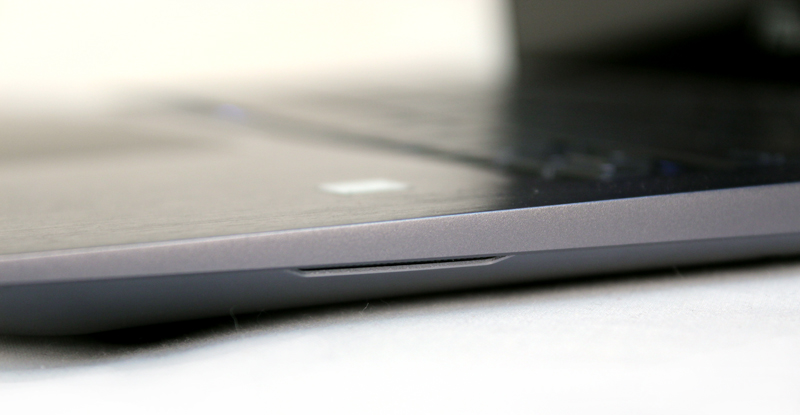 Sound quality isn't too bad, but as is usually the case with Ultrabooks, it's a bit thin, and also completely lacking in bass. Volume is fairly loud, but there was also some slight but perceptible distortion at maximum volume. Perhaps bundling a good portable wireless speaker would be a nice option to have when purchasing Ultrabooks.

The UX302 has a chiclet-style keyboard with three levels of adjustable backlighting, which is controllable through the Function keys. The key action is firm and crisp, with enough travel to make typing comfortable. The backlight could probably be a bit brighter, and it can actually be hard to see at all under normal lighting conditions, but it does the job just fine in the dark. 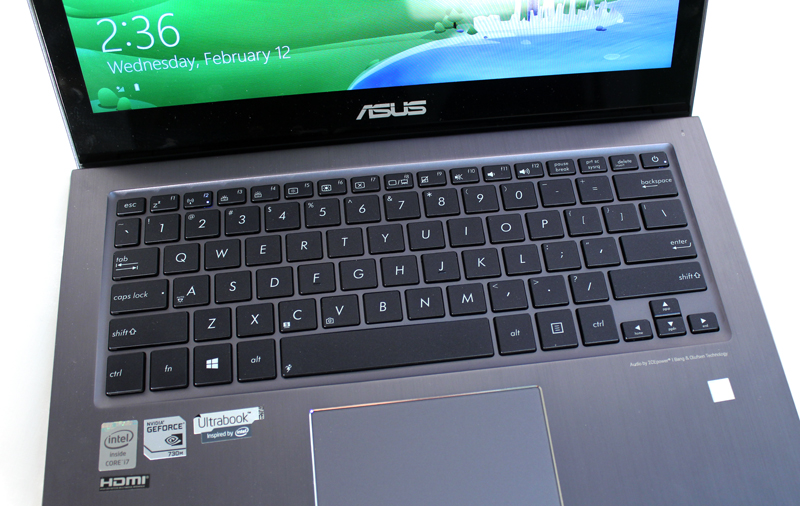 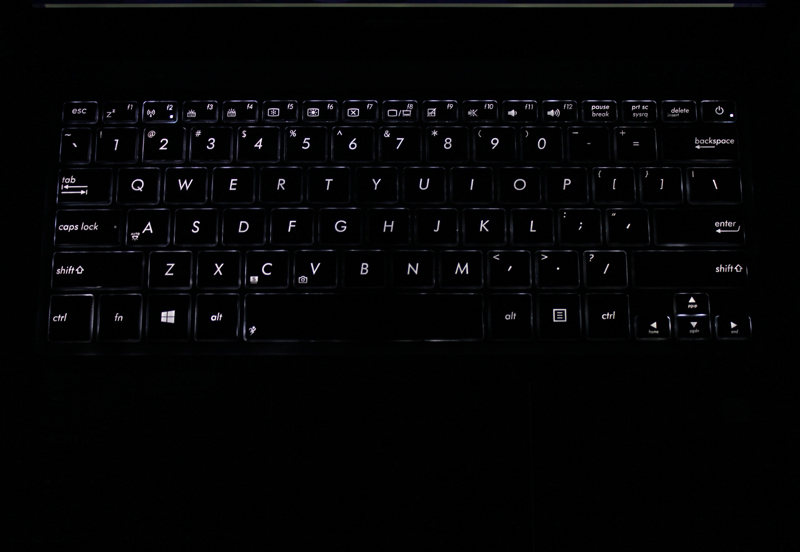 Trackpads used to be the weak point on ASUS' Zenbooks, but all previous issues seem to have been fixed now. The UX302's trackpad is decently sized, and is very slightly recessed into the interior, providing a nice tactile separation from the wrist rest - which is fortunate, because the trackpad isn't backlit, so you'll need to feel around for it in the dark.

The trackpad has a smooth, glass-like finish to it, and like most Ultrabooks, is clickable, with a practical, if somewhat unattractive line, delineating the area between left and right click. The click is firm with a decent amount of travel, and both tracking and multi-touch gestures worked accurately. 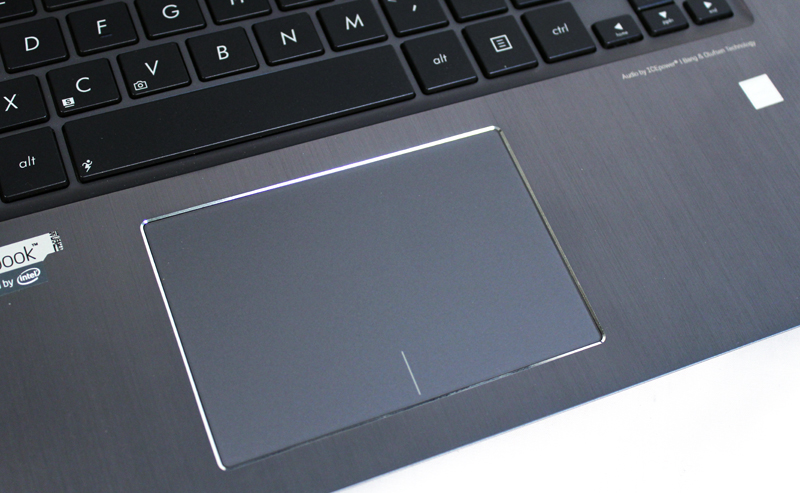 Connectivity on the UX302 is quite good, with three USB 3.0 ports (one of which is supercharged to output up to two amps of charge - about the same as your average wall plug charger), an HDMI port, a Mini DisplayPort port, and an SD card reader - although we're not too happy about the card reader leaving more than half the card sticking out of the port. Conspicuously absent is an RJ-45 Ethernet port, which means you'll have to rely on wireless or an adapter for Internet connectivity.

Write a Review
Compare This | Specifications
Gorgeous dark metallic blue finish with Gorilla Glass 3 lid
Discrete NVIDIA GT730M GPU provides better than average graphics performance
Lots of storage space with 750GB HDD
Thicker and heavier than most 13.3-inch Ultrabooks
Hybrid SSHD is slower than Full SSD
4GB RAM on Core i7 model and only 2GB on Core i5 model
Under average battery life
Our articles may contain affiliate links. If you buy through these links, we may earn a small commission.
Sponsored Links