All about ergonomics and cooling 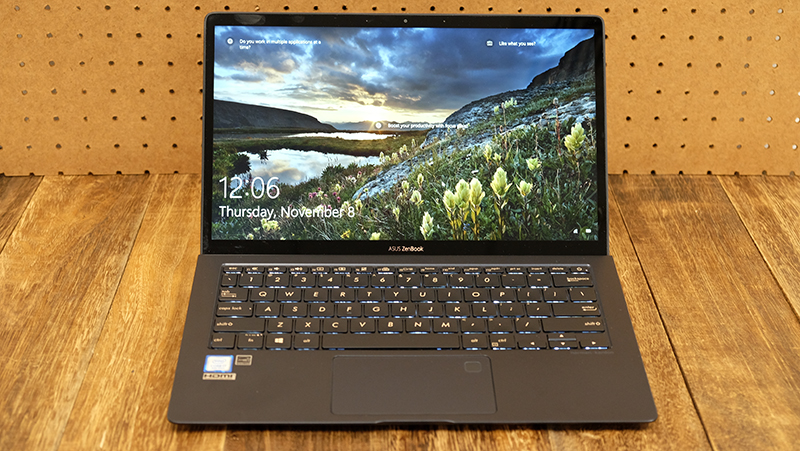 At first glance, the ASUS ZenBook S UX391 looks a lot like many of the company’s other ZenBooks. It’s drenched in a familiar blue hue that ASUS calls Deep Dive Blue, and the lid is etched with the series’ signature pattern of concentric circles. It’s a more subtle pattern than on some of the other ZenBooks though, and you can’t really see it until you peer closely.

The edges have also been accented with rose gold, a small detail that complements the overall look of the notebook quite well.

The ZenBook S wants to be a premium ultraportable that you can toss in your bag and forget it’s even there. To that end, it’s super light and slim, weighing just 1.05kg and measuring a mere 12.9mm thick. It’s not the thinnest notebook you can buy, but it sure cuts a very svelte figure. 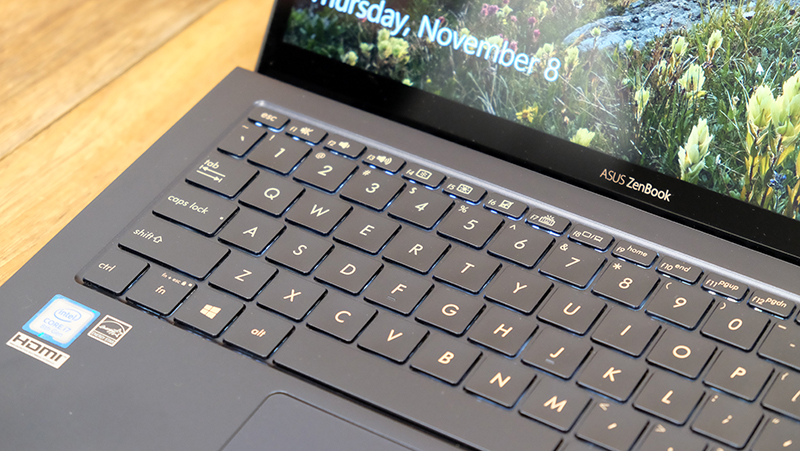 In addition, it features a unibody aluminum alloy construction, which feels really solid and reassuring. There’s barely any discernible flex anywhere, and the notebook sure seems like it’ll be able to withstand being knocked around in your daily use. It’s also designed to pass MIL-STD 810G tests for drops, temperature, humidity, and altitude, so it’s in fact pretty hardy.

That said, the lid does seem a little prone to picking up scratches, so you might want to take extra care in that area. 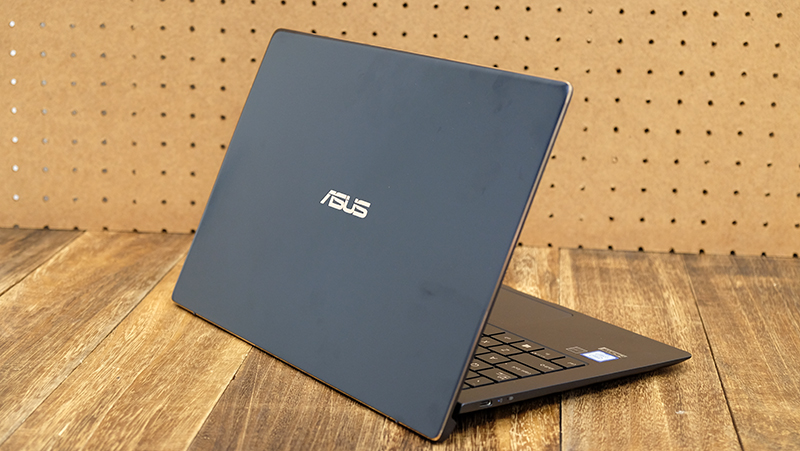 However, the real standout feature on the notebook is probably what ASUS calls the ErgoLift hinge we first mentioned in the introduction. Put simply, it’s a hinge that elevates the keyboard to a more comfortable typing angle when the lid is raised. The ZenBook S’ keyboard is tilted at a 5.5-degree angle, which ASUS says it decided upon after extensive testing (such as the ASUSBPRO B9440 from 2017 that first featured this design). 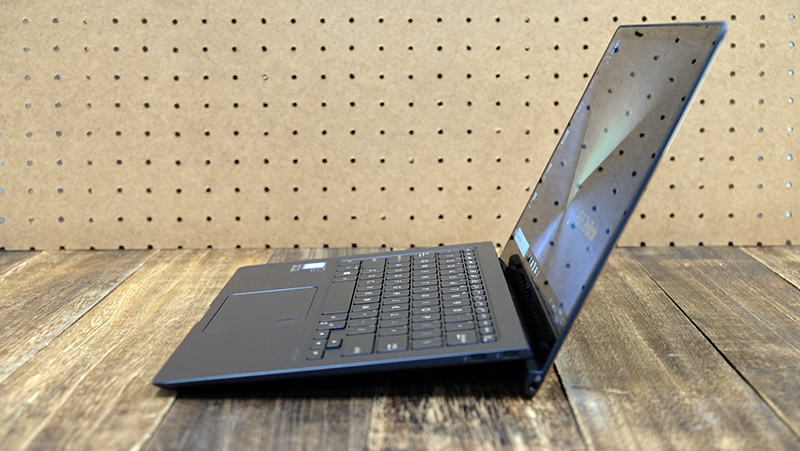 I can’t speak to whether 5.5 degrees is more comfortable than some other figure like 10 or 12 degrees, but I can say that it’s quite comfortable to type on in practice. In addition, it feels quite good to use on your lap as well and the added air gap means that you’ll feel less discomfort from heat. The additional space between the laptop base and the tabletop also helps improve ventilation for the notebook, where cool air is drawn in through the bottom and expelled through vents hidden in the hinge. 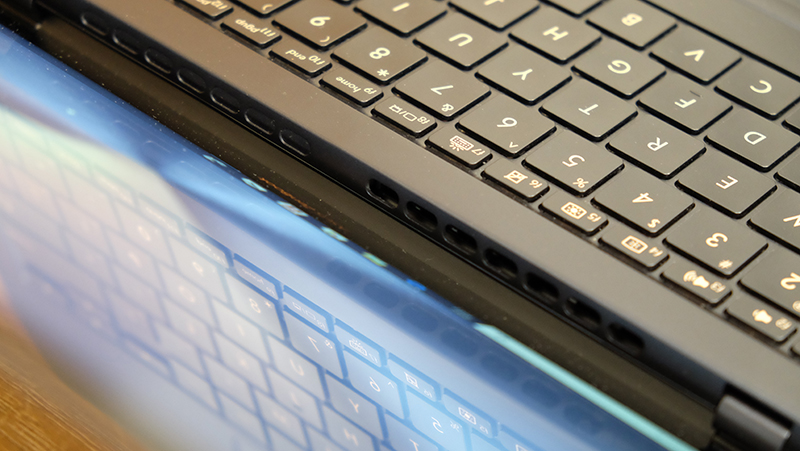 According to ASUS, this design also helps improve audio delivery by creating more space for the bottom-firing speakers. As it turns out, the sound quality on the notebook is pretty decent. Music came through pretty loud, with reasonably clear mids and a full low-end.

However, I’m not sure that the ErgoLift hinge actually helps with cooling that much. The notebook could still get pretty warm to touch, although things were noticeably improved in an air-conditioned room. The laptop is equipped with a single fan and heatpipe, but the good news is that the fan still stays quiet even under heavy load. This is a good improvement bearing in mind that we've previously reported some ZenBooks models can get quite noisy.

That aside, the keyboard and touchpad are excellent. There’s not a ton of travel distance on a laptop this thin, but I have no complaints about the overall response and feedback. The touchpad is also a glass-coated Windows Precision Touchpad, which feels slick, precise and responsive, or basically everything a touchpad should be. There’s a built-in fingerprint reader on the touchpad as well for Windows Hello biometric authentication. 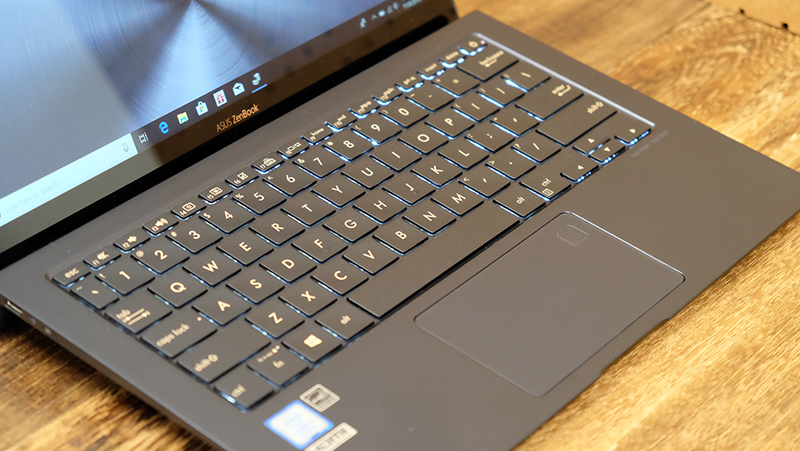 The 13.3-inch IPS display on the ZenBook S is great to look at, with bright, vivid colors that really popped. However, my review unit game with a glossy display that really picks up reflections under direct indoor lighting. Turning up the brightness helps somewhat, but the reflections can get quite annoying at times. The bezels aren’t the slimmest I’ve seen on a laptop, but at 5.9mm thin, they’re relatively unintrusive.

Networking is handled by a 2x2 Intel Dual Band Wireless-AC 8265 module, which is capable of a maximum throughput of up to 867Mbps.

Finally, the laptop comes with three USB Type-C ports, including two Thunderbolt 3 and one USB 3.1 (Gen 1) connector. The USB 3.1 (Gen 1) Type-C port sits on the left, and it supports Power Delivery, data, and display out. Furthermore, the two Thunderbolt 3 ports will let you connect up to two 4K displays each, so you can use the ZenBook S to set up a pretty neat workstation as well. On top of that, the laptop will work with a Thunderbolt 3 graphics enclosure like the ASUS XG Station Pro, so content creators can have access to additional graphics computing power when working at your desk.

You’ll be able to charge the laptop from any port, which can be pretty useful for cable management. 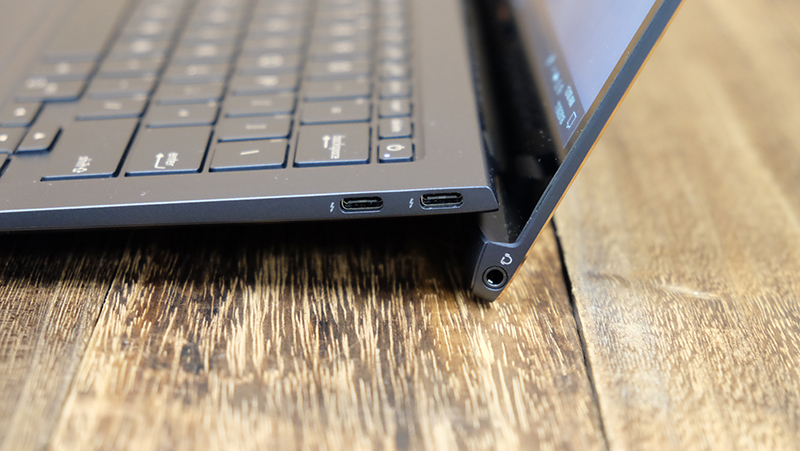