To simplify things, we won’t be using all the notebooks we tested in that shootout. Instead, we’ve picked out the Acer and Gigabyte laptops, both of which also come with 16GB of RAM like the ZenBook Pro, for a more accurate comparison. Finally, the HP Omen 15 has been included as well as it was the overall winner of the shootout.

Here’s a list of the notebooks we’re looking at:

All the laptops were put through the following benchmarks:

We used the 3DMark Fire Strike Extreme Stress Test for temperature measurements, and the battery life benchmark in PCMark 8 Home to test the battery (PCMark 10 doesn’t yet come with a built-in battery benchmark).

Unsurprisingly, the ZenBook Pro performed very similarly to the other test notebooks, given their near identical system specifications. Going by the figures here, there’s no significant difference in performance among the systems when it comes to daily computing tasks.

However, a look at the individual workloads shows the ZenBook Pro lagging behind slightly in gaming tasks, which is something that carries over into the more gaming-oriented benchmarks. 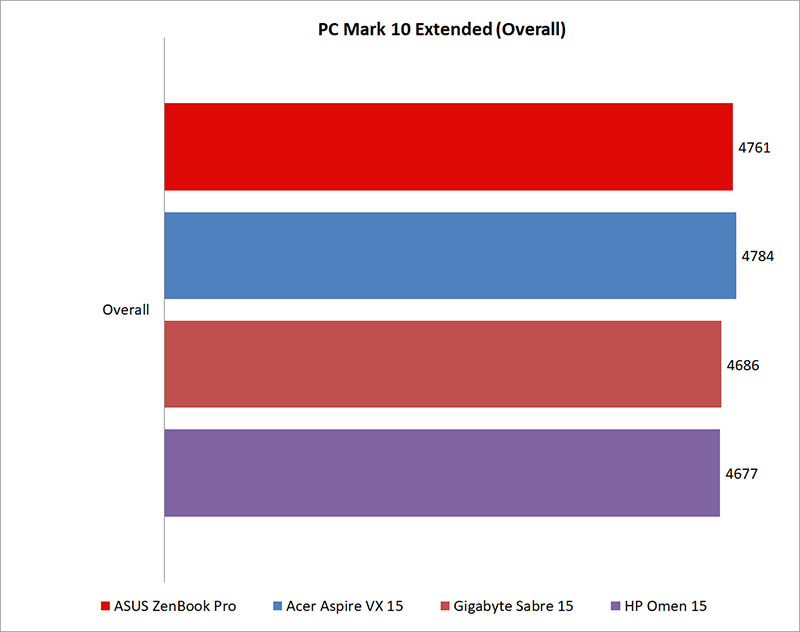 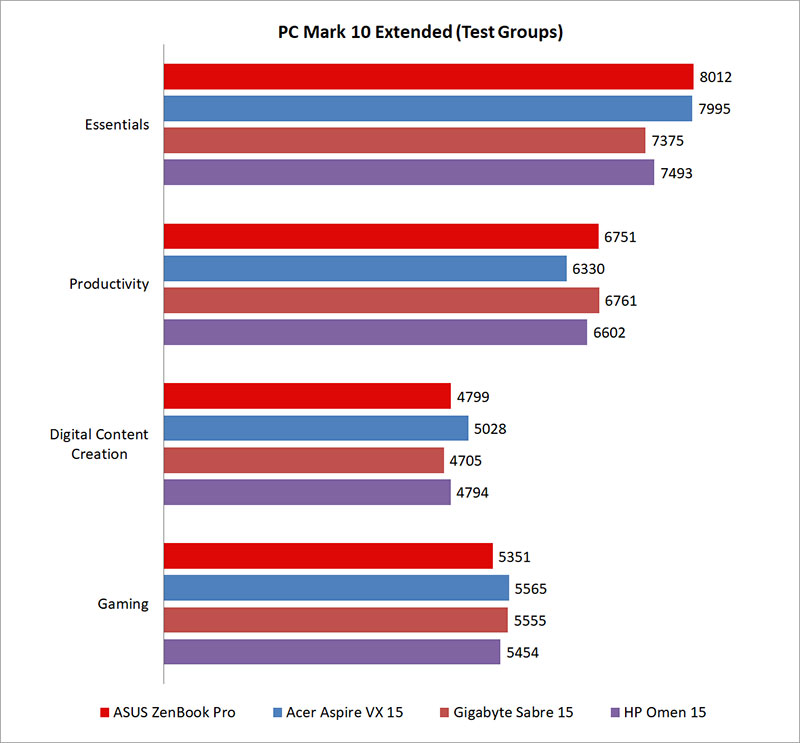 3DMark looks explicitly at gaming performance, and it puts systems through a range of graphics and computational performance tests at different resolutions, starting at 1080p and going all the way up to 4K.

The ZenBook Pro was slightly behind the rest of the pack here, coming in at just over 2 per cent slower than the Gigabyte Sabre 15. That’s a small and barely tangible deficit, but it’s still one that persists across the majority of our gaming benchmarks. 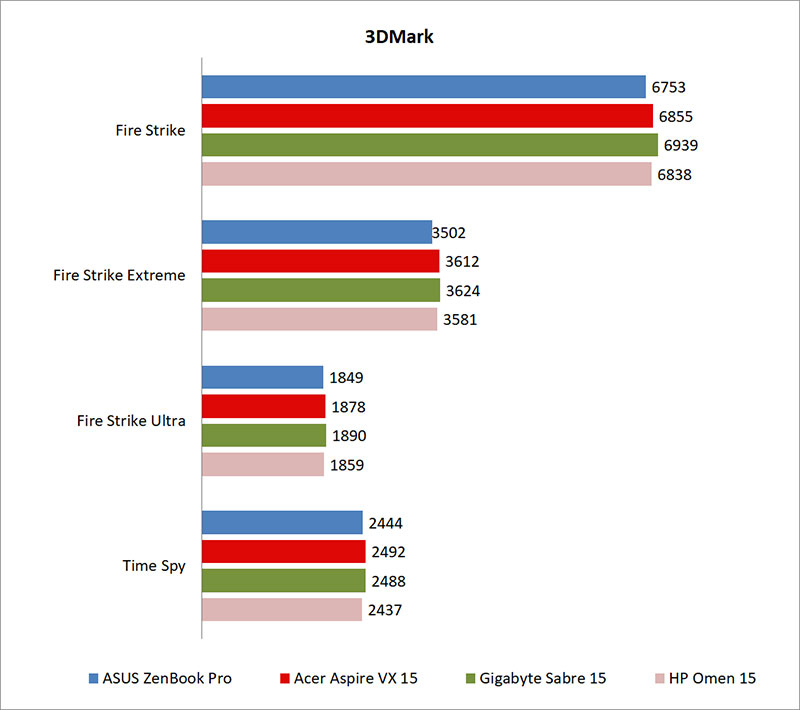 The GeForce GTX 1050 Ti isn’t suited to VR, so it’s no surprises that all the laptops fell short of the target frame rate of 109fps. In other words, the ZenBook Pro isn’t going to net you a pleasant VR experience, so you’ll have to look elsewhere if you’re thinking of frequently stepping into other worlds. 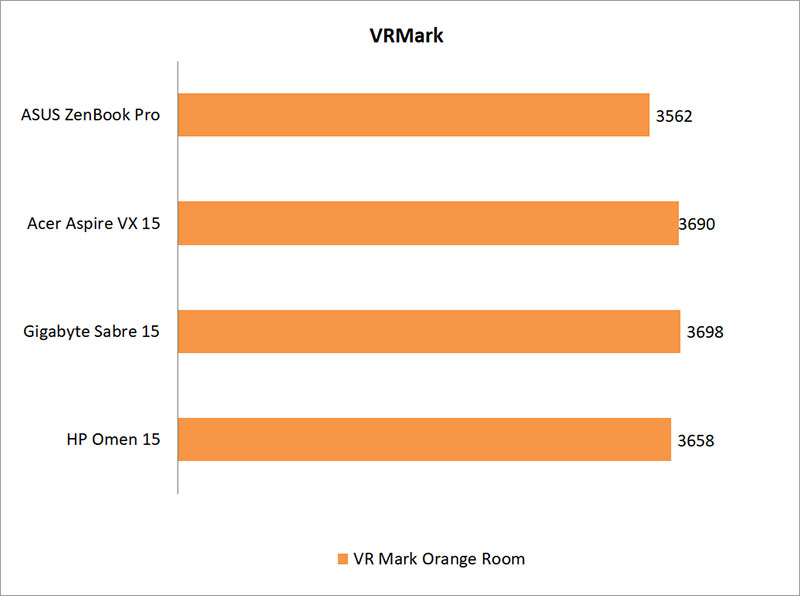 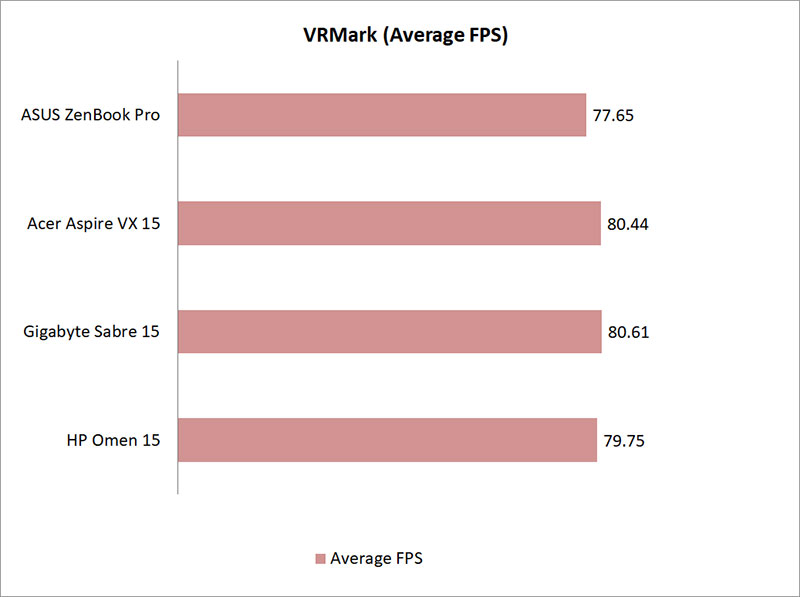 Ashes of the Singularity is a demanding real-time strategy game that puts thousands of units on screen, and it’s capable of pushing even the most powerful GPUs. However, it’s also rather limited by the CPU at lower resolutions and settings.

The ZenBook Pro continued to trail the other notebooks ever so slightly, and while it isn’t falling behind by a particularly large amount, it’s not a good thing to see either considering that it costs so much more.

Either way, Ashes is beginning to push at the limits of this particular configuration, and you probably won’t want to ramp the settings up to Crazy. 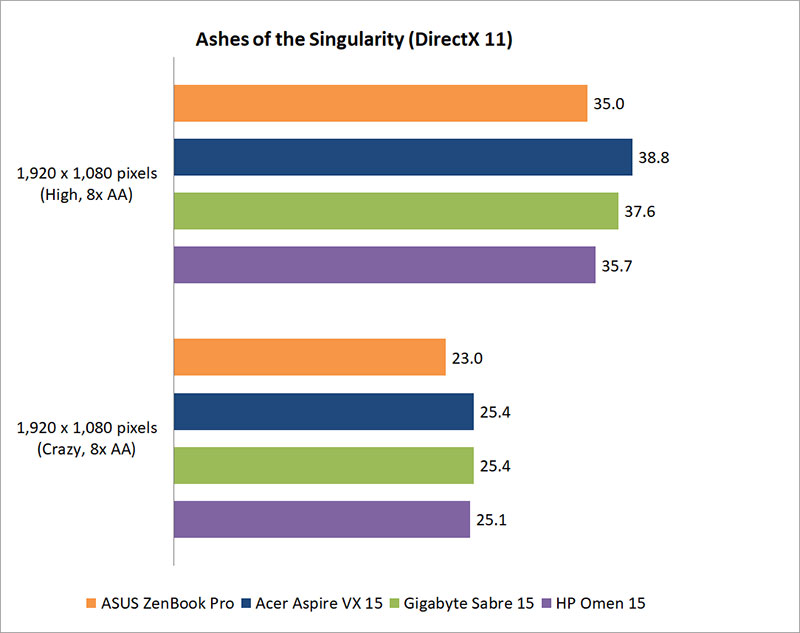 Mankind Divided is one of the most demanding titles to run today, but the good news is that a GeForce GTX 1050 Ti laptop will actually deliver a fairly playable experience, provided you turn the settings down.

Unfortunately, the ZenBook Pro didn’t impress here either, as it continued to fall behind the competition. It’s not like you get a huge performance boost from one of the other laptops, but the fact remains that it isn’t nice to pay more for something and have it perform worse, even if it’s by a marginal amount.

The same scenario repeats itself here, with the ZenBook Pro trailing the Gigabyte Sabre 15 by nearly 10 per cent at High settings.

Overall, it’s safe to say that gaming performance isn’t its strongest characteristic, and the other GeForce GTX 1050 Ti notebooks are more sensible choices if all you’re looking for is an affordable gaming laptop. 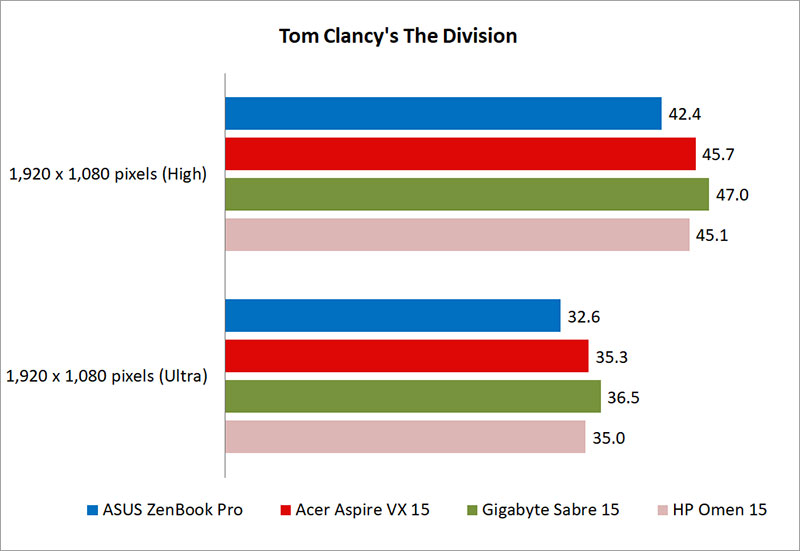