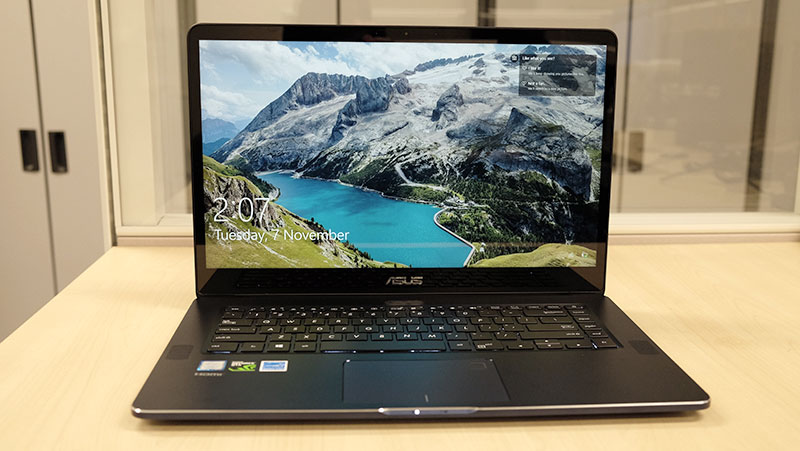 Once you open the lid, the first thing that jumps out at you is the display. The 15.6-inch display is gorgeous, and while ASUS hasn’t quite managed to slim down the bezels to the same extent as the Dell XPS 15, they’re thin enough that they don’t really bother you.

It also means that ASUS hasn’t had to compromise and put the webcam in an awkward position, such as in the bottom bezel.

That aside, having recently reviewed a bunch of gaming laptops equipped with an NVIDIA GeForce GTX 1050 Ti, the same GPU as on the ZenBook Pro, one of my main gripes was how poor the display quality was across the board.

I was met with muted colors, low brightness levels, and poor viewing angles at every turn, so the ZenBook Pro is a welcome change for the better. Of course, ASUS’ laptop is also far more expensive than those entry-level gaming notebooks, but it’s good to see that you’re actually getting something significantly better for the price premium.

The IPS display throws out bright, vibrant colors with good viewing angles, and made everything from walls of crisp, black text to photo galleries quite a pleasure to work with. And while I can’t speak to the accuracy of the color reproduction, most folks should have no issues with it.

However, the laptop does use a glossy panel, so reflections are a problem, especially with bright overhead lighting. This can be mitigated somewhat by increasing the screen brightness, and it’s one of the pitfalls of going with a glossy display over a matte one.

My review unit also comes with a touchscreen display that supports multi-touch inputs, and that can come in quite useful for small things like zooming into photos or scrolling through documents.

Another feature that deserves special mention is the quad-speaker configuration on the ZenBook Pro. The four Harman Kardon speakers pump out loud and full-bodied sound, for a laptop, and bass was tight and punchy.

That’s probably because of the two woofers at the bottom of the notebook, which are focused on handling the low bass frequencies. The top-firing speakers are dedicated to the mid and high frequencies, and the resulting sound quality is definitely a cut above average. When combined with the excellent display, the ZenBook Pro seems set up to be quite a decent entertainment machine.

Overall, the unibody aluminum chassis feels extremely solid. Build quality is great, and the display hinge opens smoothly with just the right amount of resistance. Unlike the aforementioned GeForce GTX 1050 Ti gaming laptops, there’s no plastic in the notebook’s body, which is a huge step up. 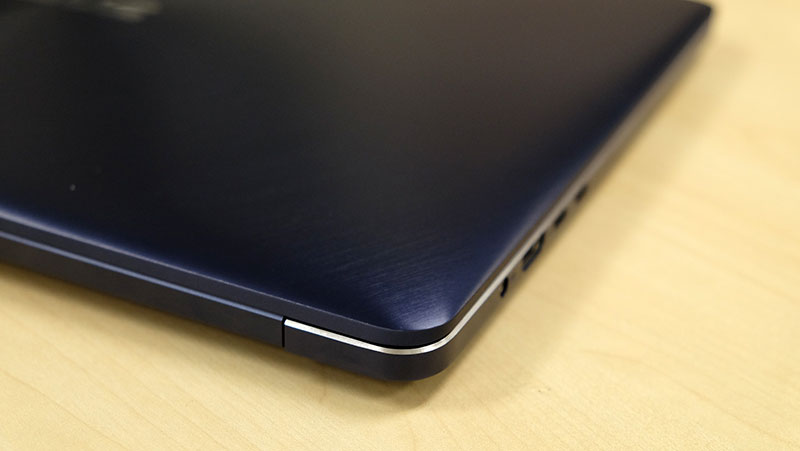 But ASUS also wants you to use the ZenBook Pro for work, so it included a bunch of ports and connectors to facilitate multi-display setups. The laptop supports dual 4K external monitors via two Thunderbolt 3 ports on the left, and you can use them in tandem with the laptop screen for a total of three simultaneous displays.

There’s also two USB 3.1 (Gen 1) Type-A ports on the right, and a microSD card reader beside them. It’s a little puzzling why ASUS didn’t choose to implement a full-sized SD card reader instead, especially if it’s targeting working professionals with this laptop.

There definitely seems space for one, but now you’ll probably need to take up one of the two USB Type-A ports with a separate card reader if you work frequently with photos. One glaring omission is the dedicated Ethernet jack, which is probably the clearest sign that this isn't intended as a dedicated gaming laptop.

The keyboard itself could also use some improvement, and it feels quite shallow for a laptop of this size. The white backlight is also rather faint, to the point that it’s barely visible in regular indoor lighting. Another minor annoyance is the uneven backlight bleed around the edges of the keys, although you’ll have to be in a dark room to notice that. 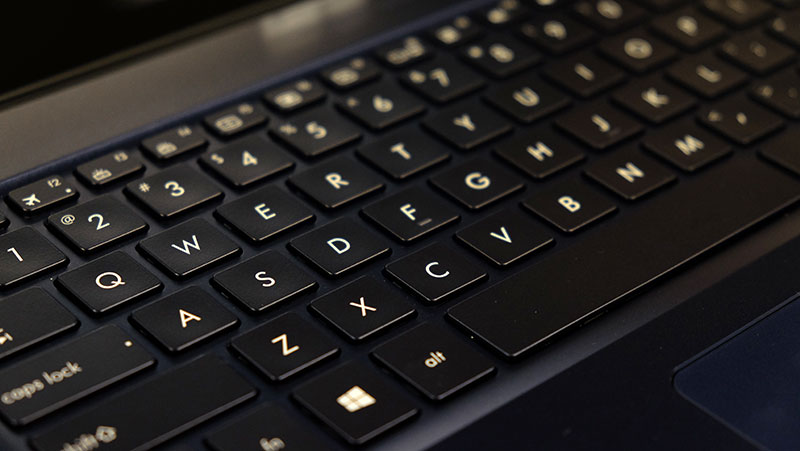 Fortunately, the glass-covered trackpad feels responsive and accurate, and it has an integrated fingerprint sensor on the top right corner that will let you log in using Windows Hello. The left- and right-click buttons are also integrated into the trackpad itself, and I prefer this implementation to having separate buttons.

When it comes to cooling, ASUS has gone with dual fans and three heat pipes to draw heat away from the CPU and GPU. Two heat pipes are shared between the CPU and GPU, but the third is located on the other side of the board and is dedicated to helping dissipate heat from the GPU.

The good thing is that the notebook doesn’t get too loud when under load, which is much appreciated given how thin it is.

However, the fans are mostly always active, and there’s a slightly disconcerting lack of intake vents at the bottom of the laptop. Instead, the intake vents are shared with the exhaust, and ASUS says it’s had to rejig the interior layout of the laptop to preserve its thin dimensions. The vents are concealed under the hinge, and it seems to me that this design is a bit problematic because the hinge partially obscures the vents when it’s open. 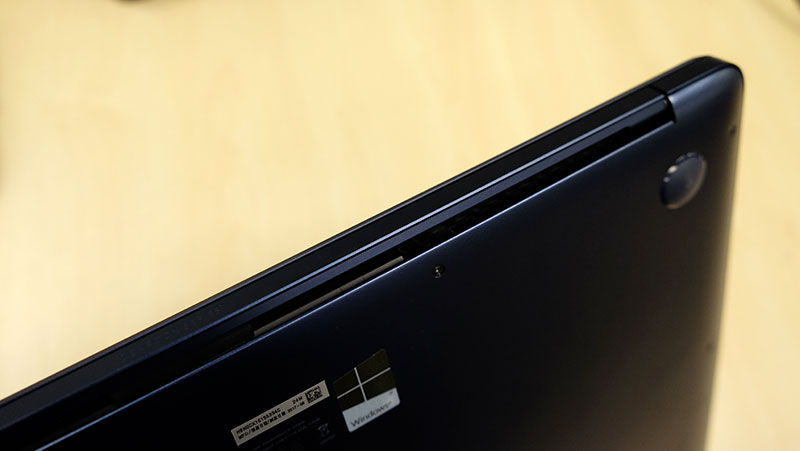 Nevertheless, the notebook didn’t get excessively warm while I was using it, and temperatures were pretty much on par with the other GeForce GTX 1050 Ti notebooks that actually have plenty of vents. Still, as you’ll see later in the results section, it looks like this design might actually be giving rise to some performance throttling to keep the temperatures in check.

One final thing to note is that the laptop isn't easily upgradeable, which is a bit disappointing for such a performance-oriented system. The bottom panel is held in place by Torx screws, so a regular screwdriver won't work. And even if you do have the right tools to get it off, the RAM actually takes the form of soldered memory chips, so that's not upgradeable either. Your only option is to add more storage in the form of a larger M.2 SSD, although the 512GB drive that the ZenBook Pro comes with should be more than enough for most users.