With its powerful Core i9 H-series processor and NVIDIA RTX 30-class graphics, the ZenBook Pro Duo UX582 has specifications that rival gaming notebooks. It also has a price tag to match. At just a shade under five grand, it’s nearly double the price of ASUS’ own dual-screen ZenBook Duo UX482. So let’s see how much more performance five grand is going to get you.

Here's how the ZenBook Pro Duo UX582 stacks up against other ultraportable notebooks.

Unsurprisingly, the ZenBook Pro Duo 15 UX582 proved to be significantly quicker than the ZenBook Duo UX482 and the other ultraportable notebooks. Because of its Comet Lake processor, single-core performance on CPU benchmarks like Geekbench 5 and Cinebench R23 was slower but it completely blitzed the field when it came to multi-core performance, which is the highlight of its high-end H-series Core i9 processor. Performance on anything graphic intensive was good too thanks to its powerful GeForce RTX 3070 GPU. Clearly, the ZenBook Pro Duo 15 UX582 is a massive step up in performance compared to ultraportable notebooks.

Remember I mentioned that the notebook has a performance mode? It really works. Depending on the benchmark, I saw increases from 5% to as much as 10%. It does, however, come at the cost of a lot of noise and heat. It generates so much heat in this state that it’s possible for users to repurpose it as a heater. Be that as it may, if you need that extra bit of performance, its nice to know that it’s there. 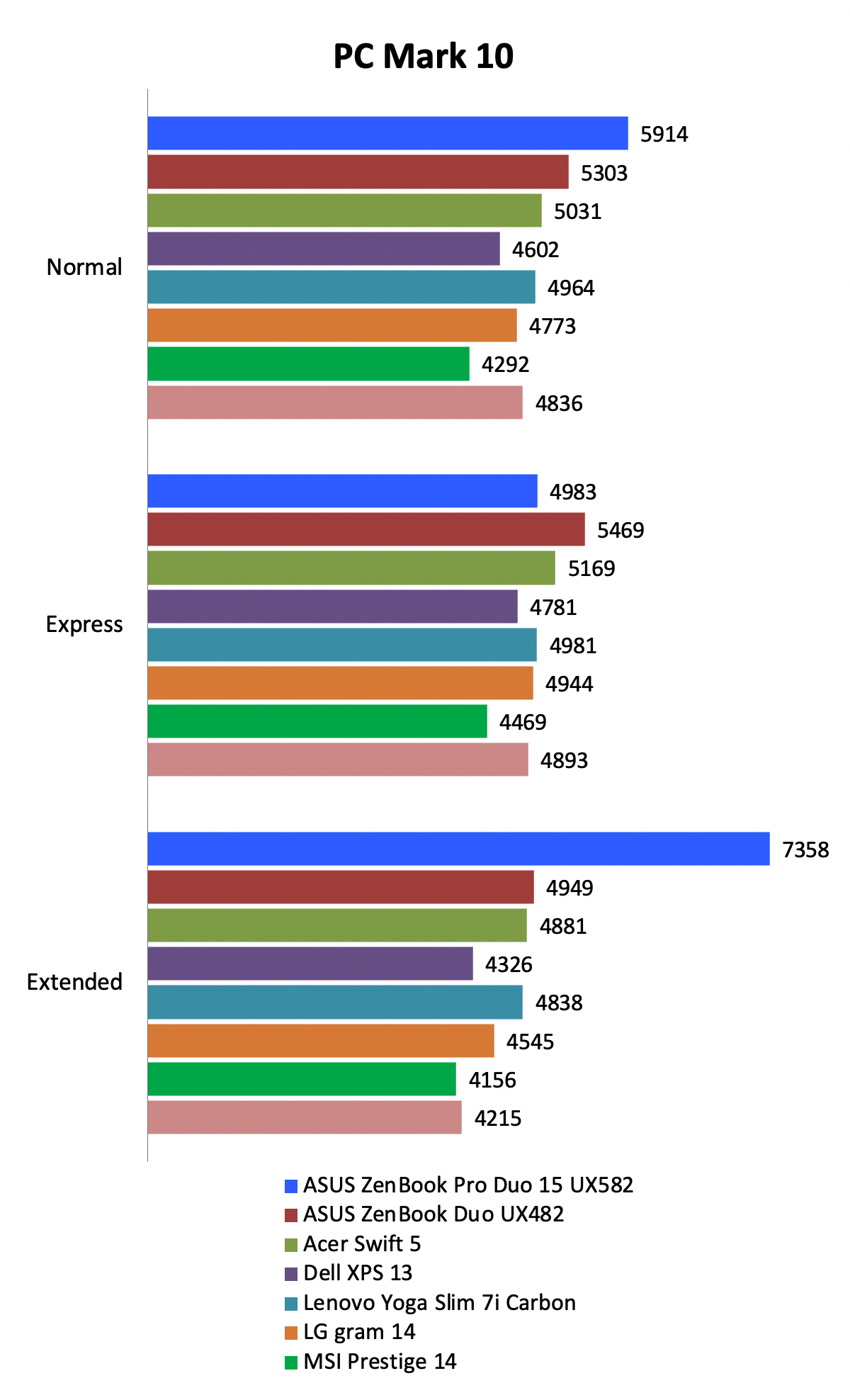 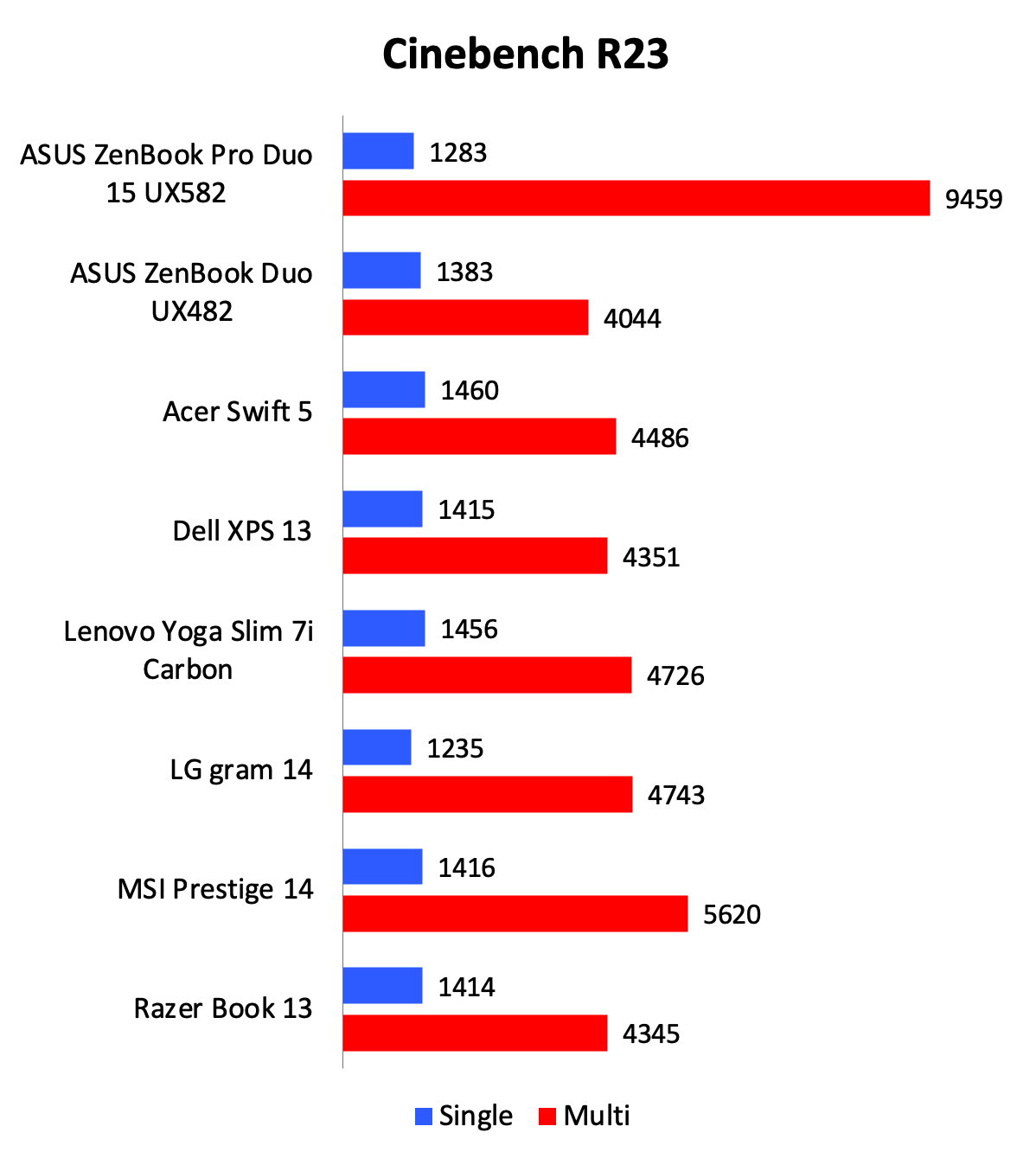 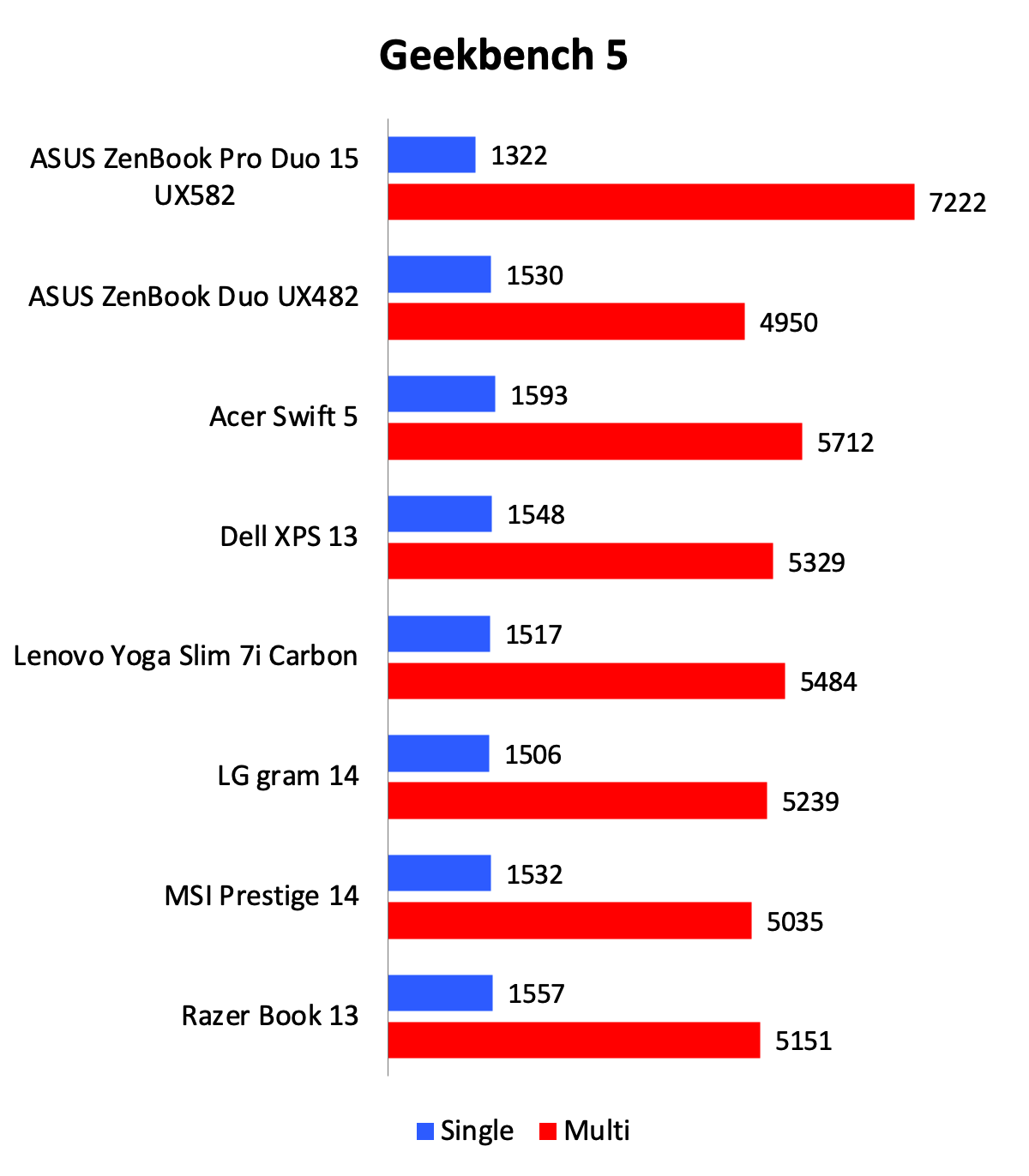 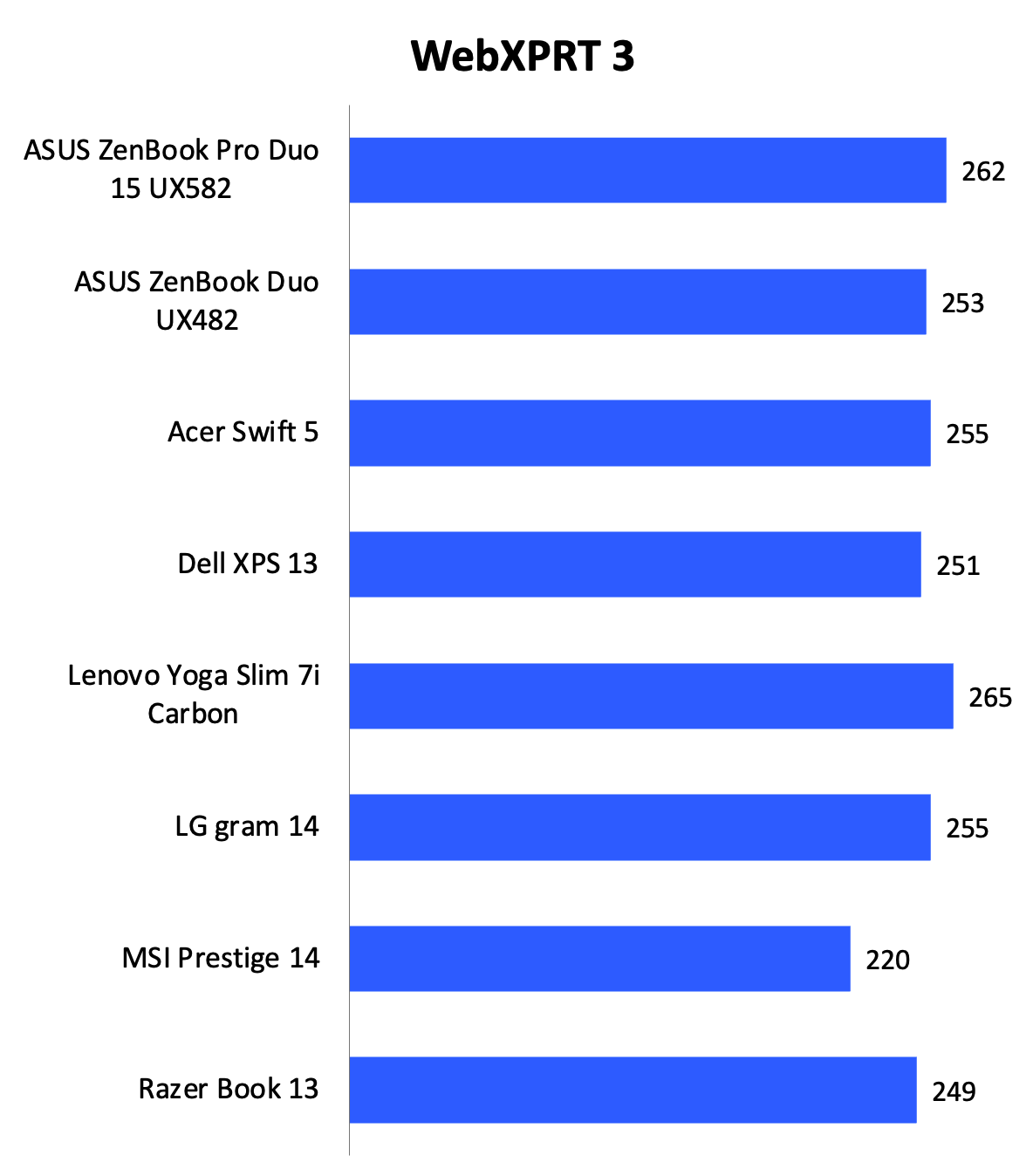 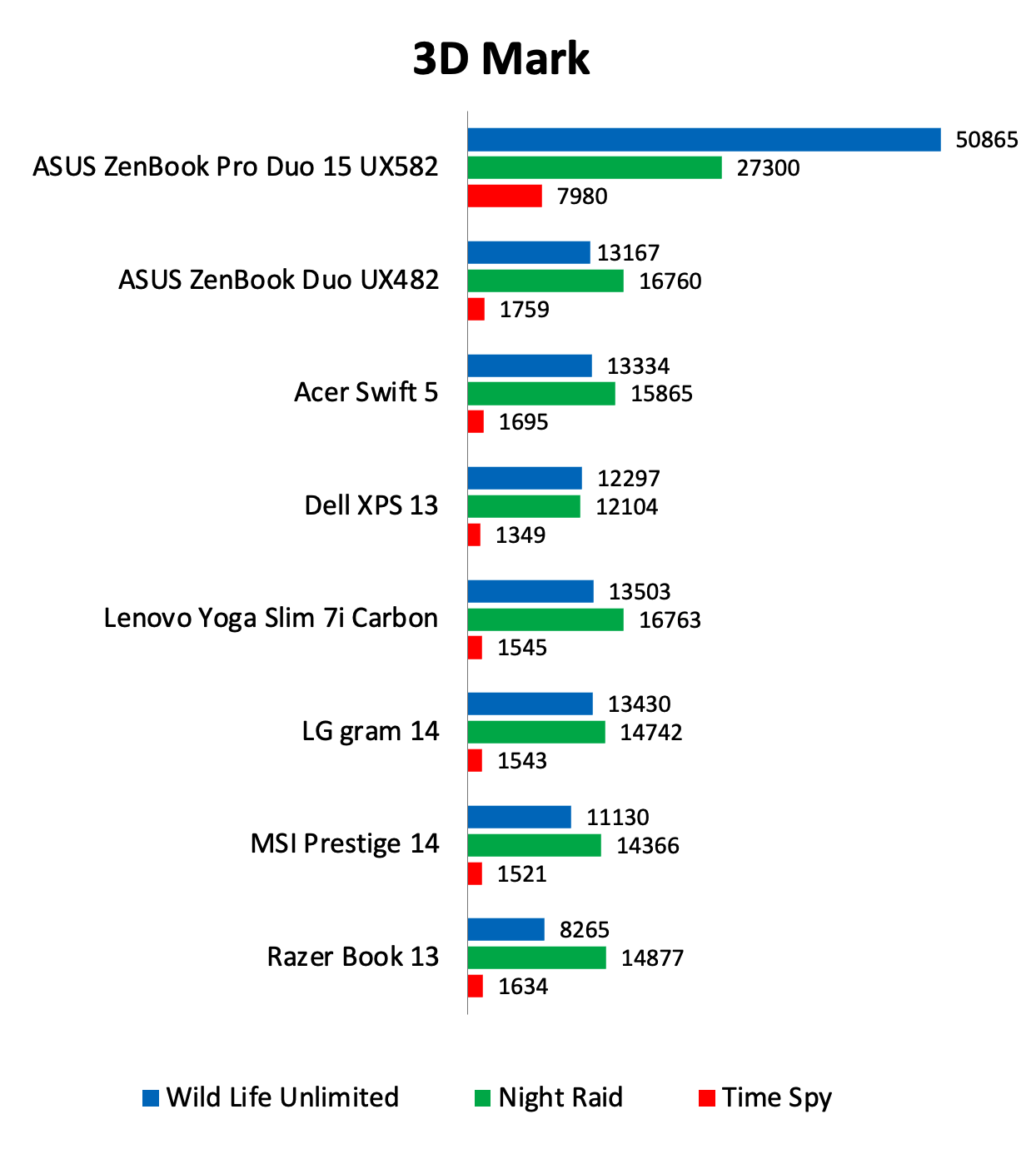 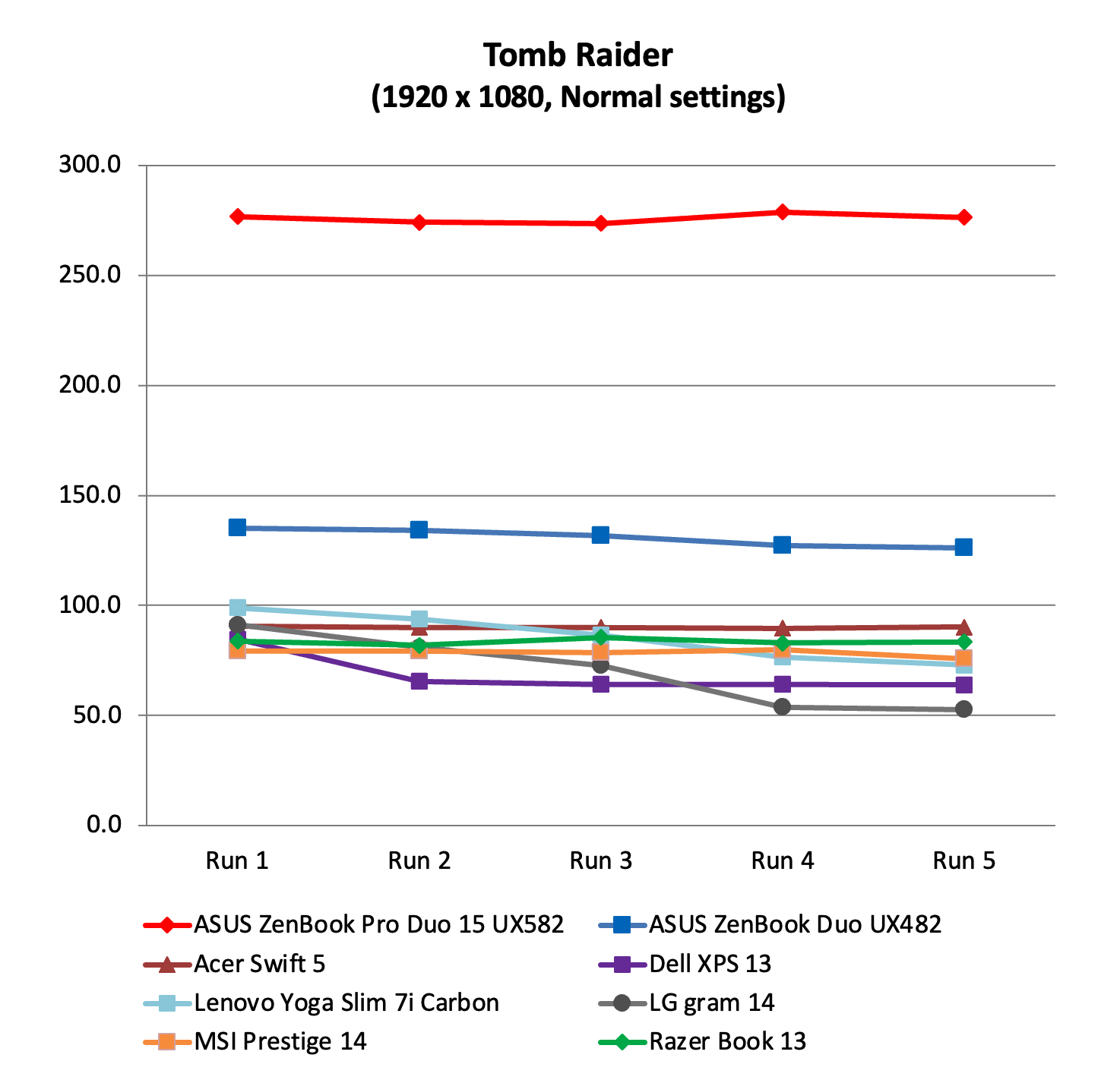 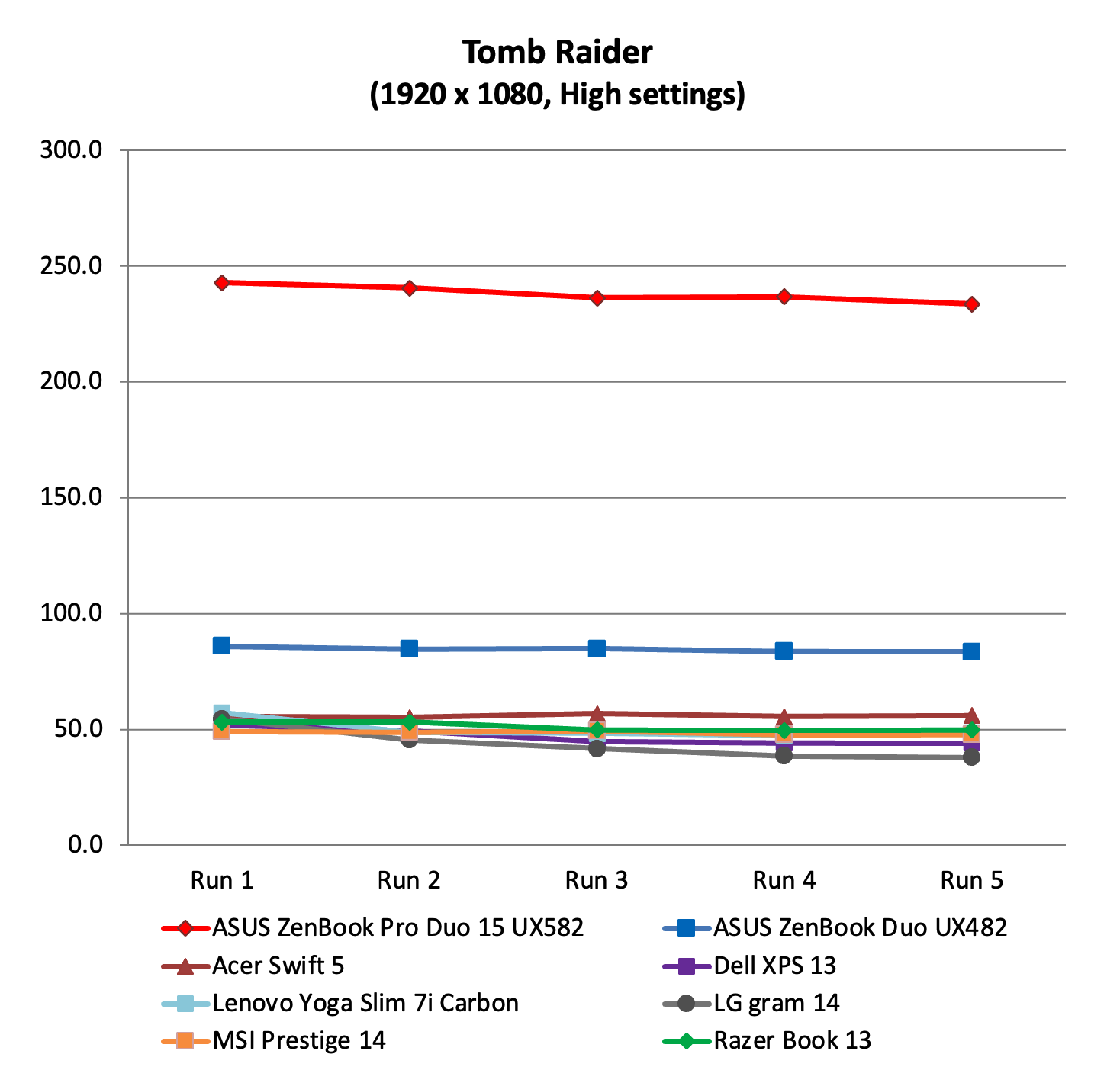 Now, let’s see how the ZenBook Pro Duo 15 UX582 compares against other 15-inch gaming notebooks. Though it isn’t an all-out gaming notebook, its performance was adequate and it is certainly up to the job if you wish to play games on it. Even with the graphics settings turned to maximum, it maintained playable frame rates and more than held its own against gaming notebooks like the ROG Zephyrus S15 and Razer Blade 15 that used last-gen GPUs. 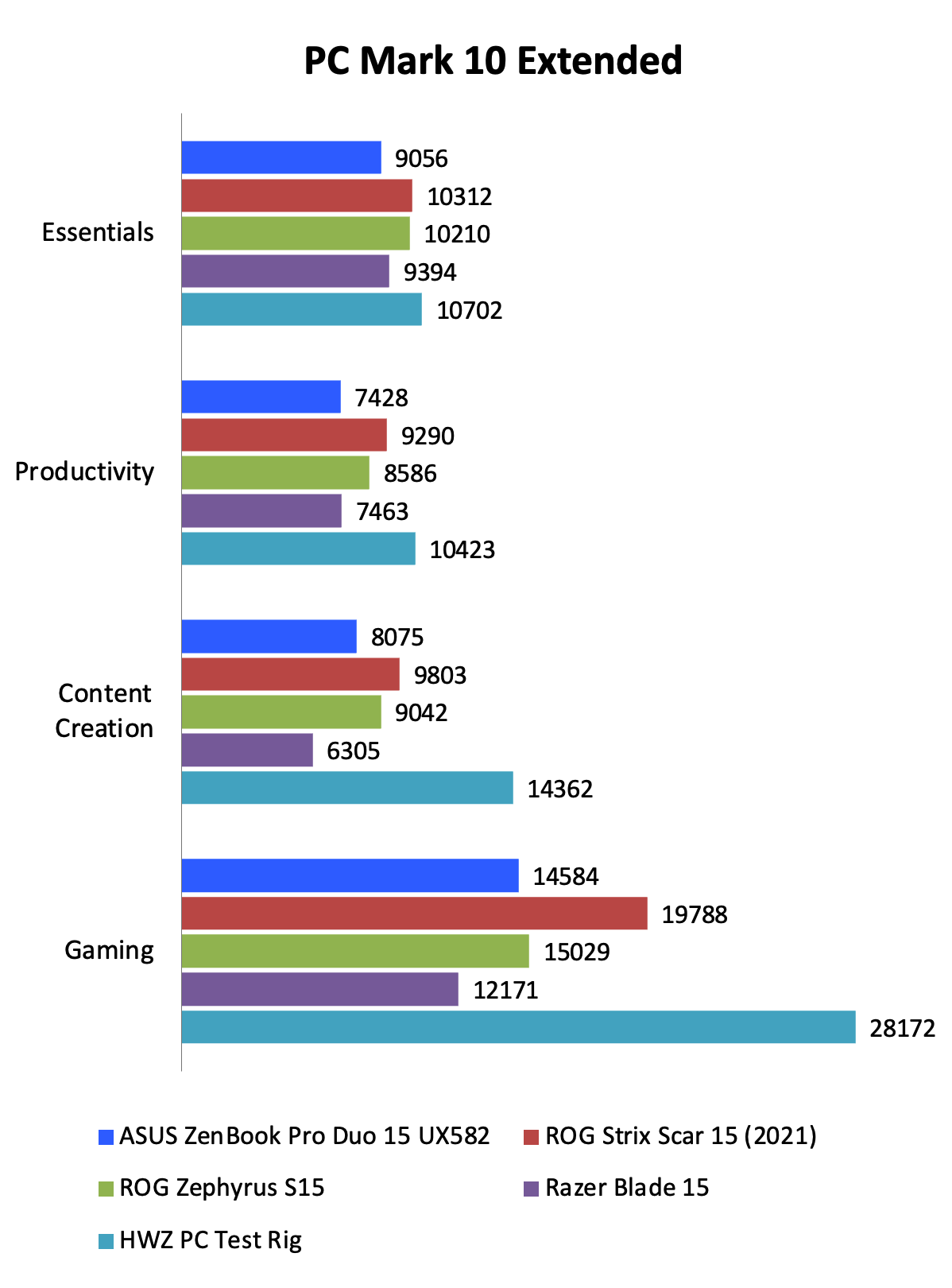 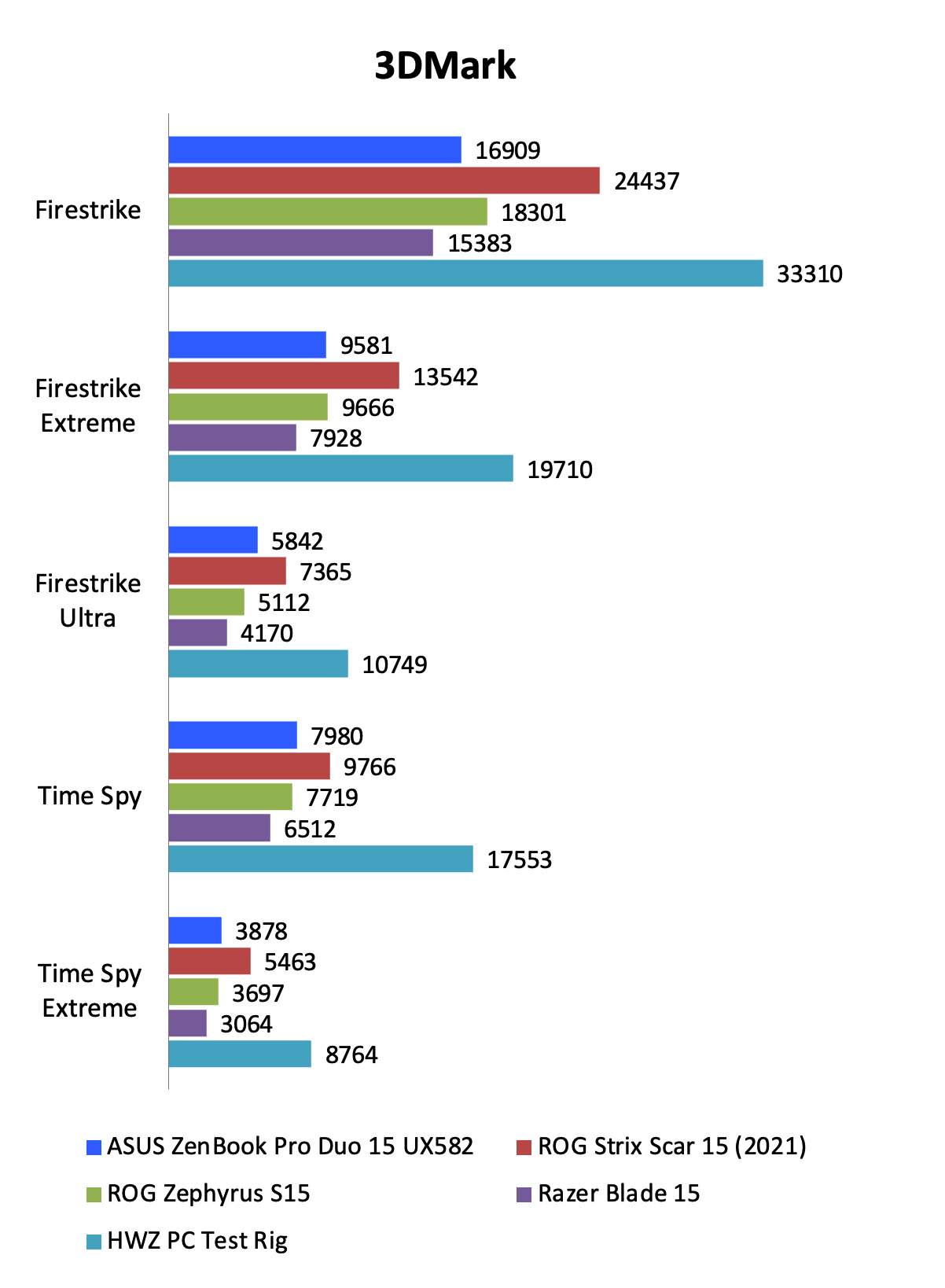 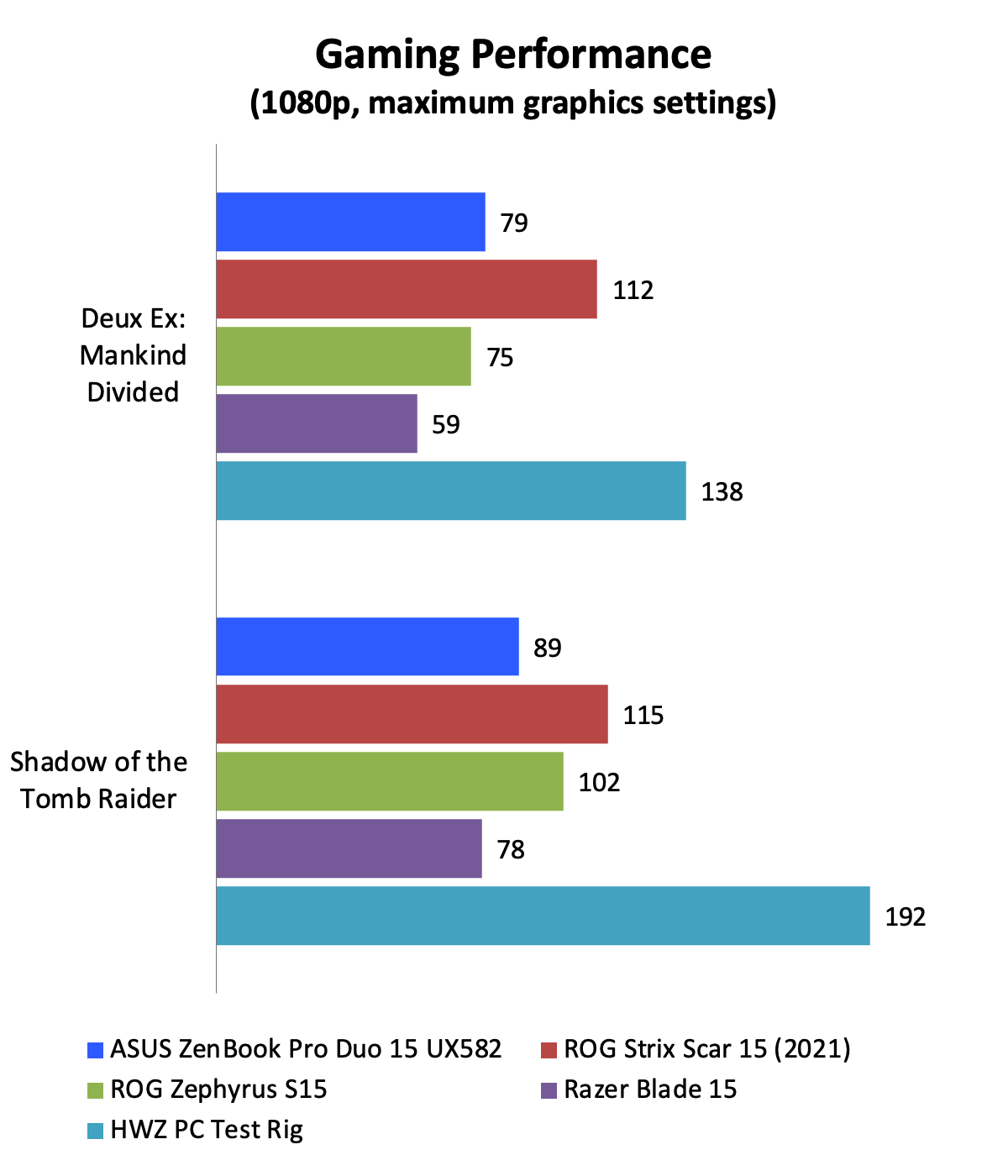 At first glance, it looks like the ZenBook Pro Duo UX582’s battery life isn’t great, but remember we are comparing it here with ultraportable notebooks. Unfortunately, I don’t have comparable data for gaming notebooks. The important thing to recognise is that it lasted nearly four hours on the Modern Office workload and that’s with both the main and secondary displays set to full brightness. Considering its specifications, that’s decent, if not remarkable for its class and features. 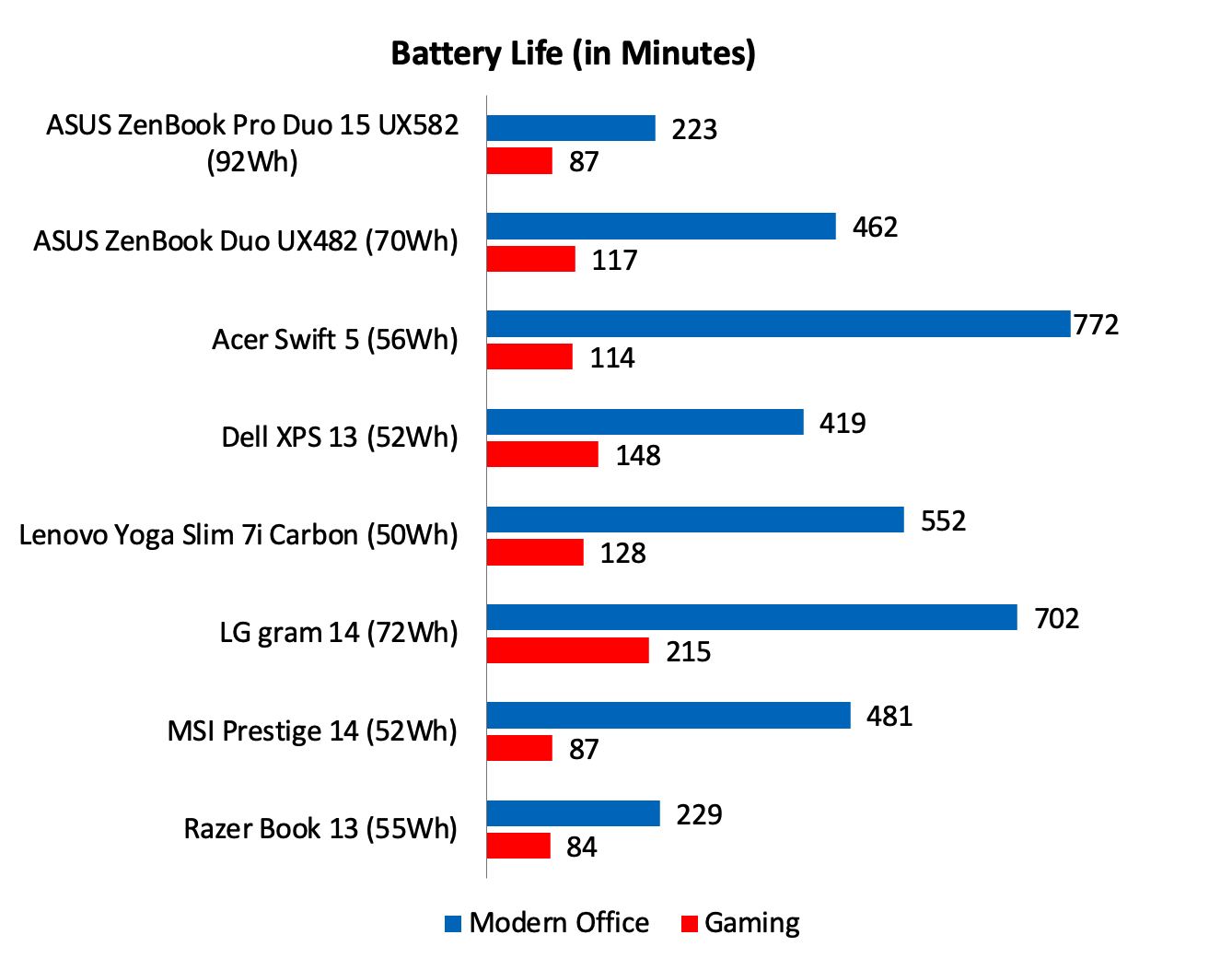 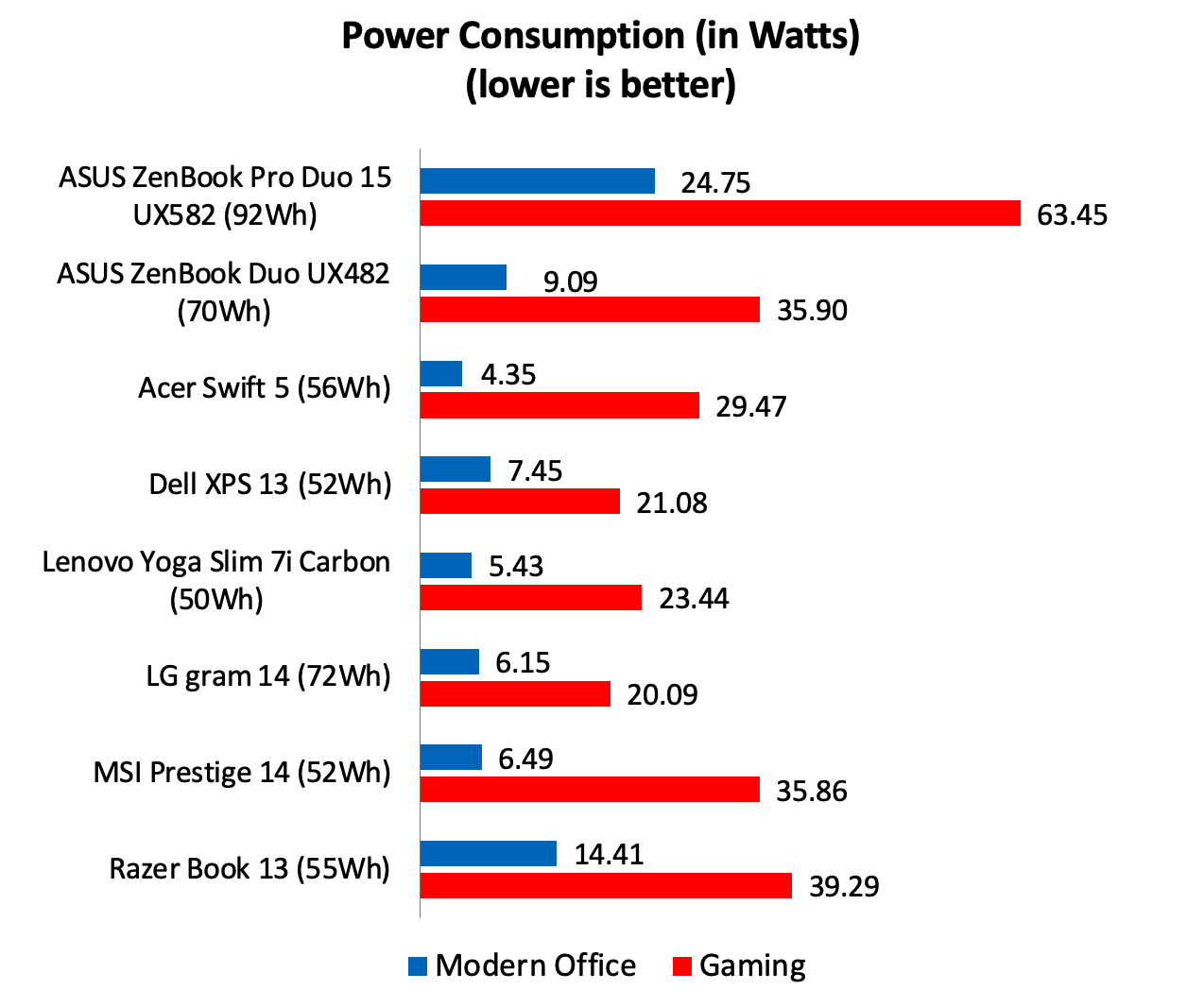 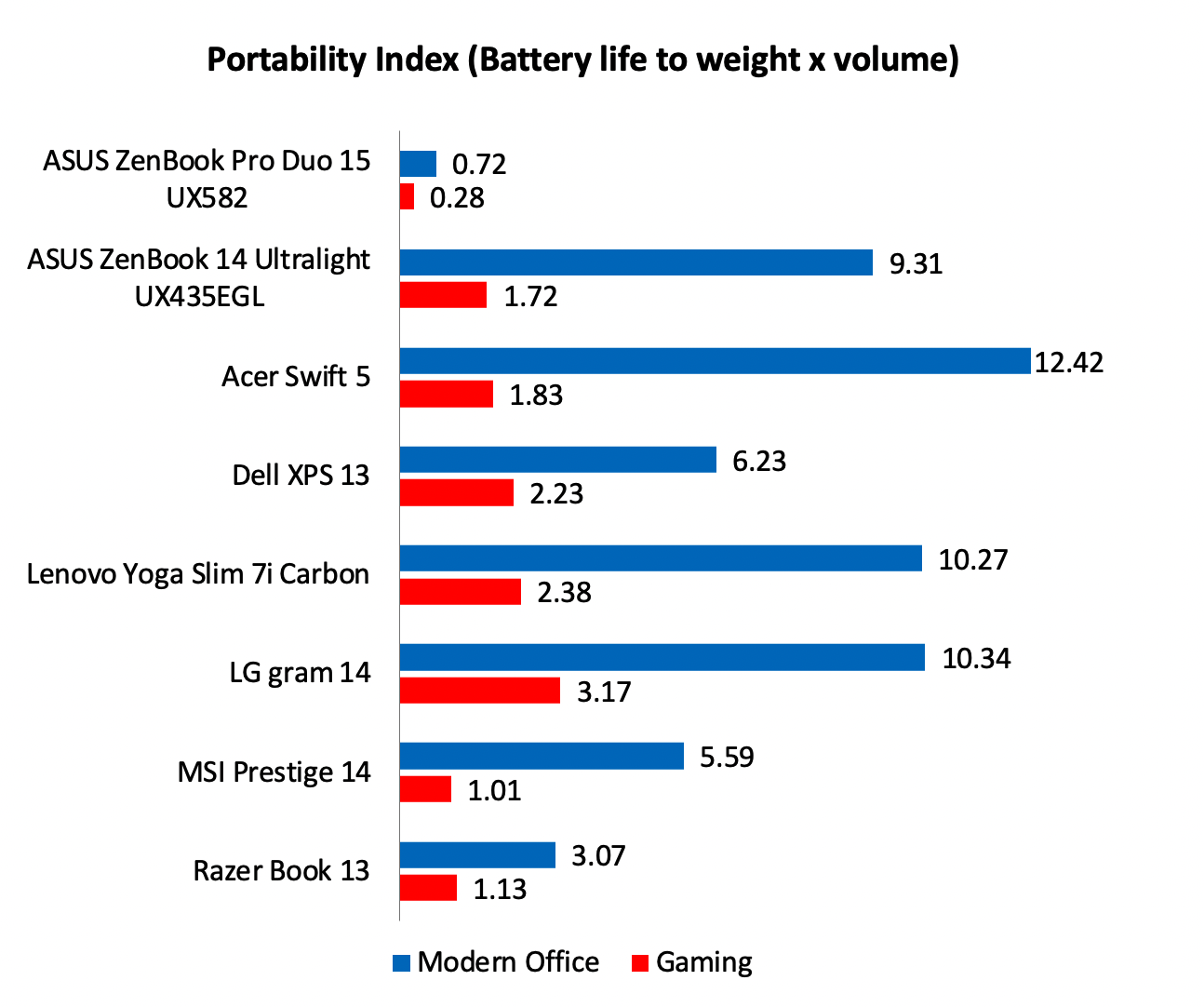 Is this a content creator’s dream notebook? There are two ways to look at it: the objective and the subjective. Objectively, this notebook has a lot going for it. Even though it has two displays and considering its specifications, ASUS has done a commendable job at keeping it relatively compact and portable. The main display is brilliant. OLED and 4K means colours are terrific and sharpness is faultless. My only complaint insofar as the displays are concerned is that the secondary ScreenPad Plus display is clearly of lower quality. So when you look at the two together, the difference in quality can be distracting. 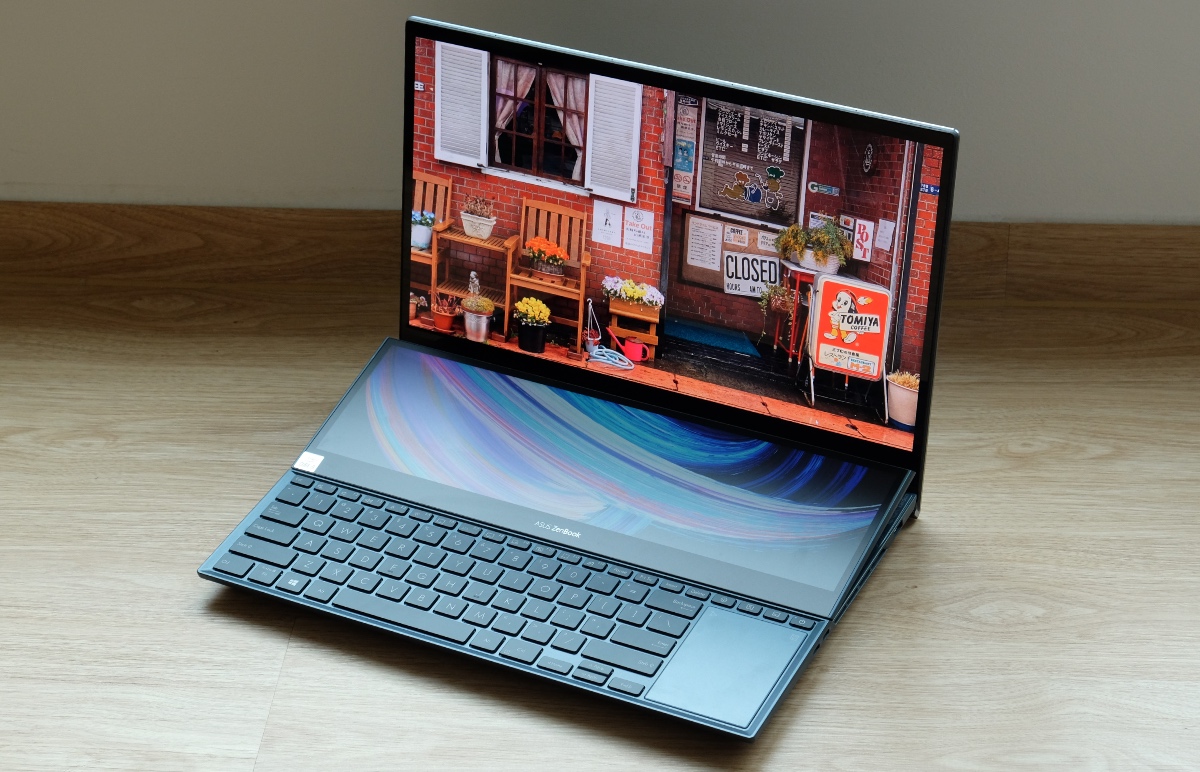 Performance is good too. It’s almost as good as it gets for a mobile device so owners should be happy using it for both work and play. It’s no battery champ but it’s sufficient for users to get work done outside – and you can stretch it by turning off the secondary display and turning down the brightness. However, the keyboard and trackpad are problematic. The actual hardware is good but their physical locations will cause headaches for what I'm guessing is a good number of users. And this leads me to the subjective side of this review.

Every review has a subjective side but it’s even more pertinent here because of its S$4,998 price tag. The high price can be justified by the notebook’s high-end specifications, features and everything else it crams. Furthermore, its predecessor – the ZenBook Pro Duo UX581 – was also priced similarly at launch so it’s not like ASUS is jacking up prices. More crucially, a lot of the notebook’s utility will be dependent on how users can adapt to its keyboard and trackpad. If they do, then this notebook could be a dream mobile work machine, especially for professionals who have to work on the go and prefer working with multiple screens. If performance and screen real estate is your utmost priority, no notebook can match what the ZenBook Pro Duo UX582 offers.

You can find the ASUS ZenBook Pro Duo UX582 on the ASUS Online Store.

Write a Review
Compare This | Specifications
Brilliant 4K OLED display
Clever packaging
ScreenPad Plus can be useful
New hinge mechanism genuinely helpful
Great specs and performance
Still the only creators' notebook of its type
Compromised keyboard and trackpad
No memory card reader
ScreenPad Plus still too dim
Gets loud and hot in performance mode
Pricey
Our articles may contain affiliate links. If you buy through these links, we may earn a small commission.
Sponsored Links