Right, what about battery life?

Bearing in mind the hardware that it possesses, the ZenBook Pro 15’s battery life of 160 minutes (2 hours and 40 minutes) is actually quite impressive. It outlasted the new 15-inch MacBook Pro, which has very similar specifications, by 11 minutes or 7%. What makes it even more admirable is that the ZenBook Pro 15 actually has a smaller battery than the MacBook Pro. Granted, it still is a large battery, but its longer battery life can be explained by its considerably lower power consumption of 26.63W. 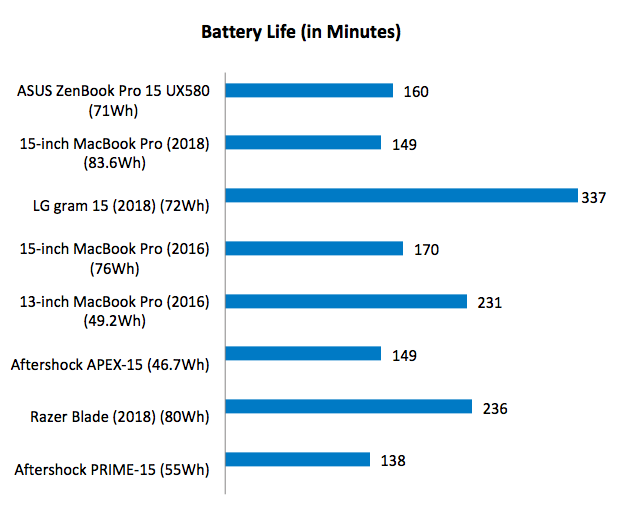 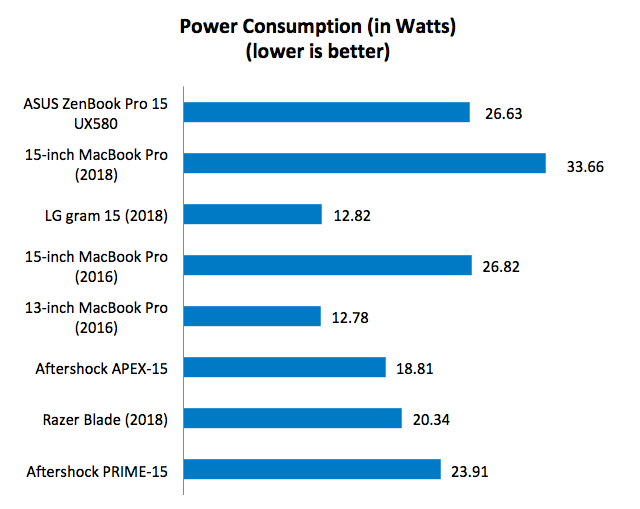 So how does it compare when you take weight and dimensions into account?

Glad you asked. If we take their battery life, dimensions, and weight into account, you can see that the ZenBook Pro 15 is actually quite a portable machine. The gram 15 is the runaway leader because of its long battery life and incredible weight (just over 1kg) but the ZenBook Pro 15’s ratio of 0.85 is actually quite respectable for a 15-inch notebook with a powerful overclockable hexa-core processor and discrete graphics. The 15-inch MacBook Pro managed a better score even though it has a shorter battery life because it is thinner and lighter.

Yes, in the real world, the 15-inch MacBook Pro is noticeably lighter and svelter. But no, the difference isn’t so great that it is an absolute dealbreaker. They are still roughly similar in terms of dimensions and weight. The gram 15, on the other hand, is unbelievable light and it is easily the most portable 15-inch notebook available right now. However, it can’t compete with the ZenBook Pro 15 in the performance stakes. The ZenBook Pro 15 will run multiple rings around the gram 15. 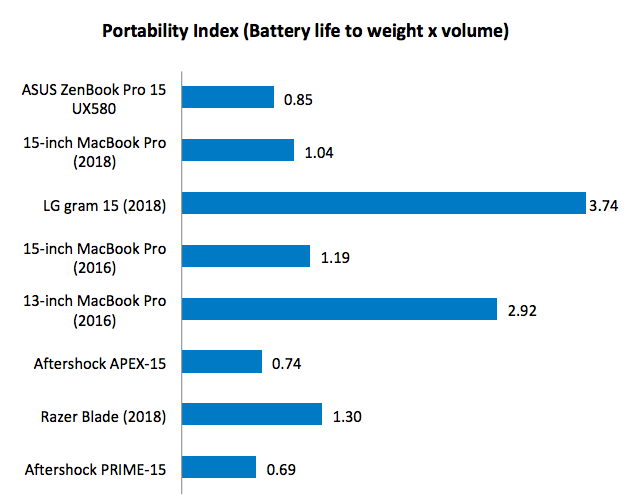 So far so good, the ZenBook Pro 15 must be expensive then? 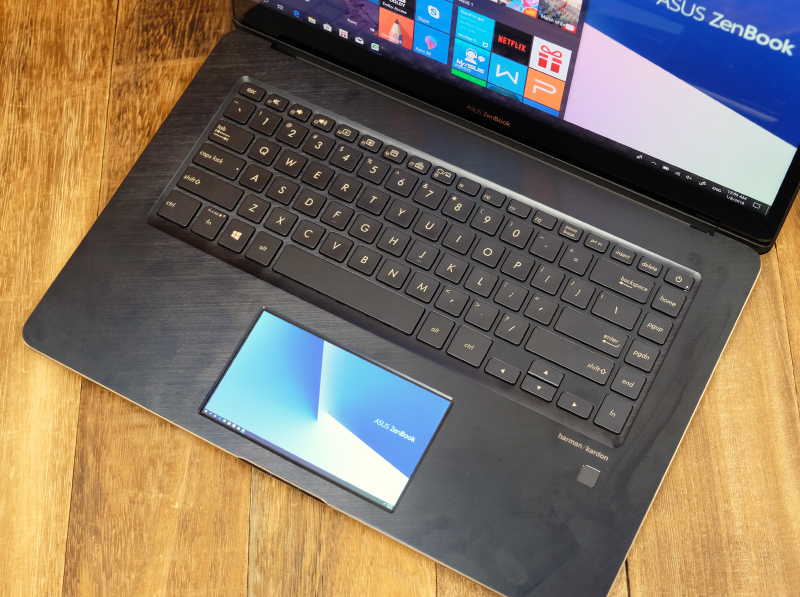 Yes and no. The model we tested is priced at $3,998, which is a lot for a notebook. And honestly, you can get more powerful notebooks for less. It won’t be as portable or well-built, but if performance is your main priority, know that there are other (though not necessarily better) options.

What the ZenBook Pro 15 offers, however, is a tasteful blend of performance and portability. Again, and as I mentioned earlier in the review, you would be hard-pressed to find another notebook with similar specifications, dimensions, and weight. The only other notebook that comes close is the 15-inch MacBook Pro and that is more costly. To get a similarly spec’d MacBook Pro would set you back S$4,968 - a whopping S$970 more. And in that light, the ZenBook Pro 15 actually represents quite good value for money.

Would I recommend it?

If the nearly S$4,000 price tag doesn’t put you off and you have the need for a powerful yet portable 15-inch notebook, then yes. There’s a lot to like about the new ZenBook Pro 15, so much so that I think it’s easier if I list them down simply in bullet form.

I only have a couple of gripes: the choice of GPU, the lack of a full-size SD card reader, and the arguably superfluous ScreenPad.

Though the GeForce GTX 1050 Ti is perfectly capable of running games, it isn’t quite as capable as the GeForce GTX 1060. As our benchmarks show, the GeForce GTX 1060 is a much more competent gaming GPU. In terms of TDP specifications, only 14W separates the two and I can’t help but wonder if there isn’t any way that ASUS can cram a GeForce GTX 1060 inside the ZenBook Pro 15. It would make it a much more capable gaming machine. As it stands, the only consolation is that there are a good number of Thunderbolt 3 external GPUs available that can help boost graphics performance if you should need it. 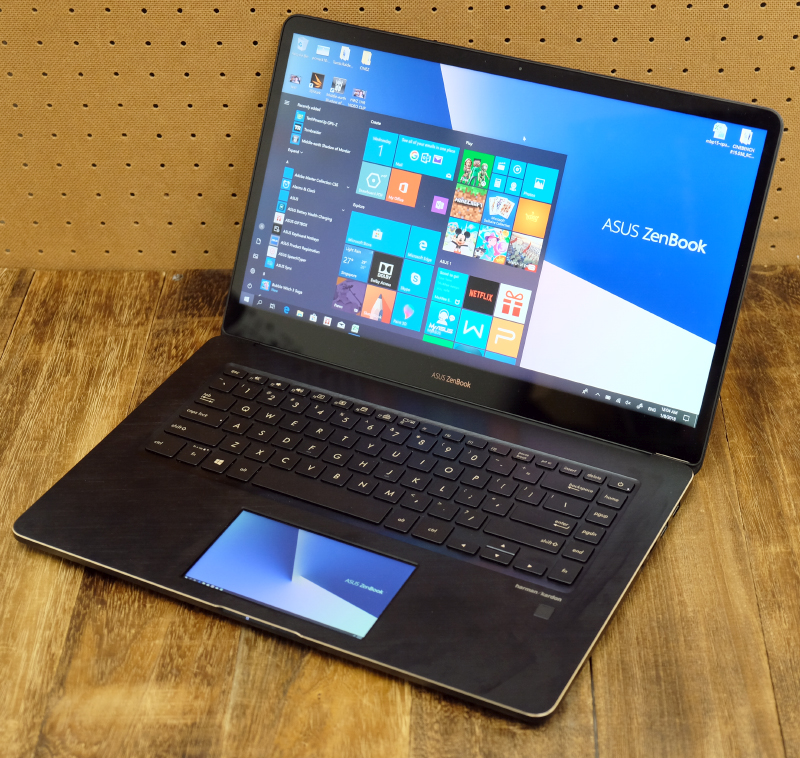 The ZenBook Pro 15 certainly looks like its big enough to accommodate a full-size SD card slot so it is puzzling why ASUS would decide to ditch it for a microSD card reader instead. This will likely inconvenience many photographers, a good number of whom still shoot with SD cards.

I also don’t find the ScreenPad to be all that useful. While 5.5-inches might sound large for a trackpad, it is actually too small to be helpful as an extended display. Apart from videos and the occasional useful shortcut, I have little use for the ScreenPad. And as I mentioned earlier, the way it works in extended display mode is unnatural and clumsy.

But despite my misgivings, well-heeled individuals seeking will have a lot to like about the ZenBook Pro 15 especially since few notebooks come close to offering the same levels of performance and portability. If you are looking for the PC equivalent of the new 15-inch MacBook Pro, this is it.