Note: This review was first published on 10 May 2022 and is updated with a score and renewed conclusion as the notebook has an official suggested retail price and is now available for purchase. 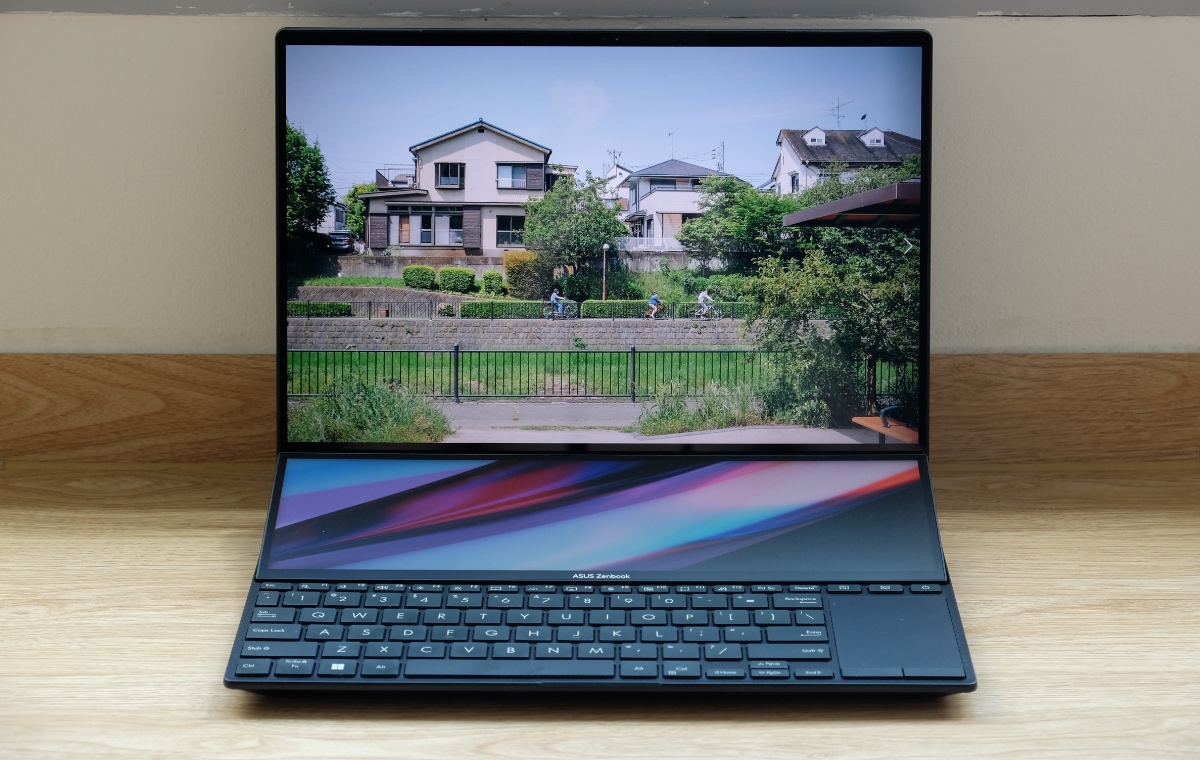 ASUS has been working hard on the concept of dual-display notebooks for a while. This here is the ZenBook Pro 14 Duo UX8402. It is their third take at a 14-inch ultraportable-ish notebook with dual displays. This time, it's a more professional edition of the ZenBook Duo 14 UX482. And I’m not going to beat around the bush, thanks to a series of incremental tweaks and changes, they have made it better. But what did they do exactly? Let’s dive into that right now.

From the outside, it’s hard to tell what has changed. One way to tell that it’s new is the redesigned lid. There’s the new arrow-shaped ZenBook logo. The signature ZenBook concentric motif is still there, but it’s more subtle now. The notebook is made with magnesium-aluminium alloy and the overall build quality is good. The chassis feels stiff and strong, and there’s minimal flex.

Weight has gone up a tad from 1.6kg to 1.75kg, while thickness remains roughly the same at 17.9mm. Though that sounds chunky, the extra heft didn’t bother me too much. Sure, it feels denser than a typical ultraportable notebook but it’s by no means unwieldy and difficult to carry around. And lest you forget, this notebook has dual screens and discrete graphics. 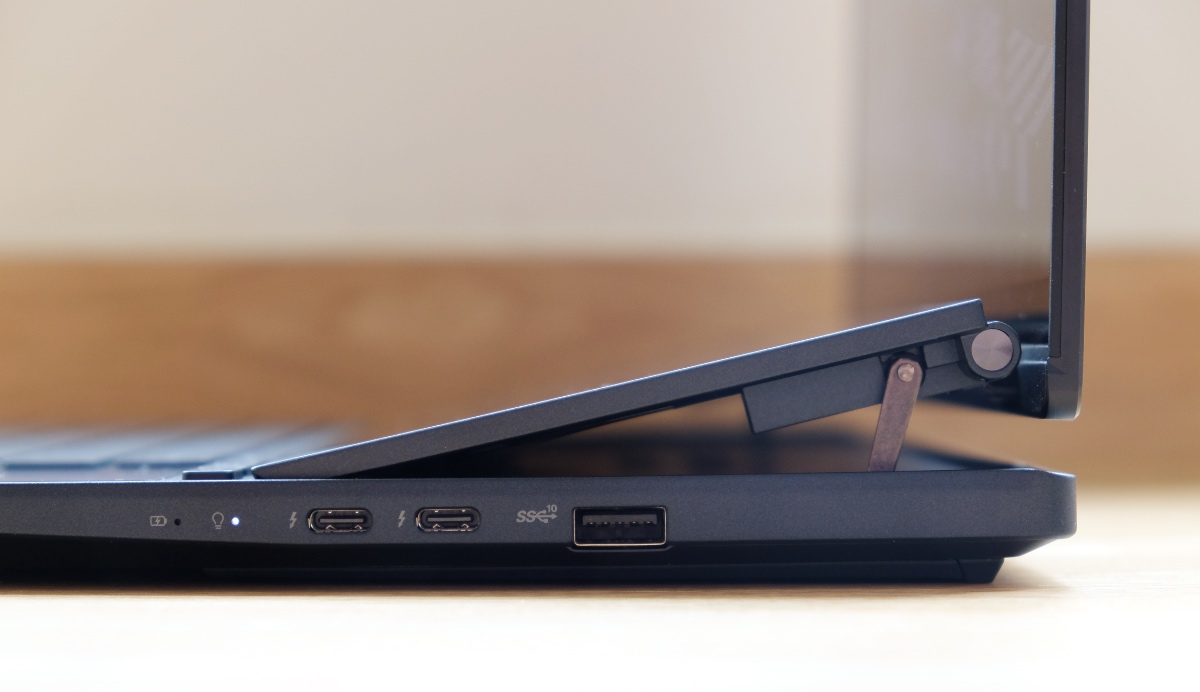 Open the notebook, however, and you’ll notice the first big change to the notebook. The entire hinge mechanism has been redesigned. The front lid no longer props the notebook up. Instead, an internal stand lifts the secondary display, which ASUS calls the ScreenPad Plus, up to a maximum angle of 12 degrees – 3 more than its predecessor.

This has a couple of benefits. The greater tilt not only makes the secondary display easier to see, it also makes it look more seamless with the main display so they look more like one large display. It also allows the air intakes to ingest more air. ASUS claims airflow is improved by a whopping 38% thanks to the redesigned hinge. 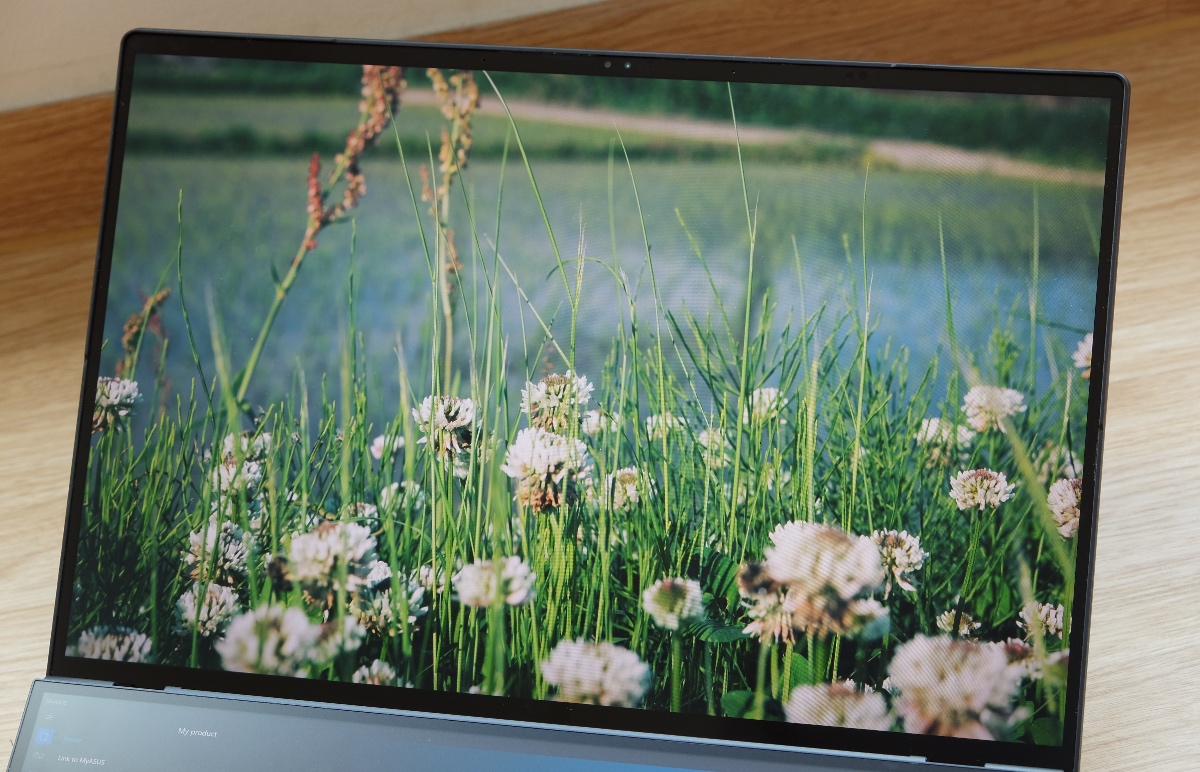 The two displays have been given a dramatic update. The main display is no longer Full-HD. Instead, it’s an OLED display with a resolution of 2880 x 1800 pixels and a high refresh rate of 120Hz. It also supports 100% of the DCI-P3 colour space, validated by Pantone, and meets VESA’s requirements for DisplayHDR True Black 500. And yes, as you’d expect, it’s a fantastic-looking display. Some readers might be concerned about burn-in, but ASUS has technologies in place to prevent that.

The secondary display or ScreenPad Plus is still LCD but it’s slightly larger – now 12.7-inches – and has a resolution of 2880 x 864 pixels to match the main display. Like the main display, it also has a refresh rate of 120Hz, supports 100% of the DCI-P3 colour space, and is Pantone validated. 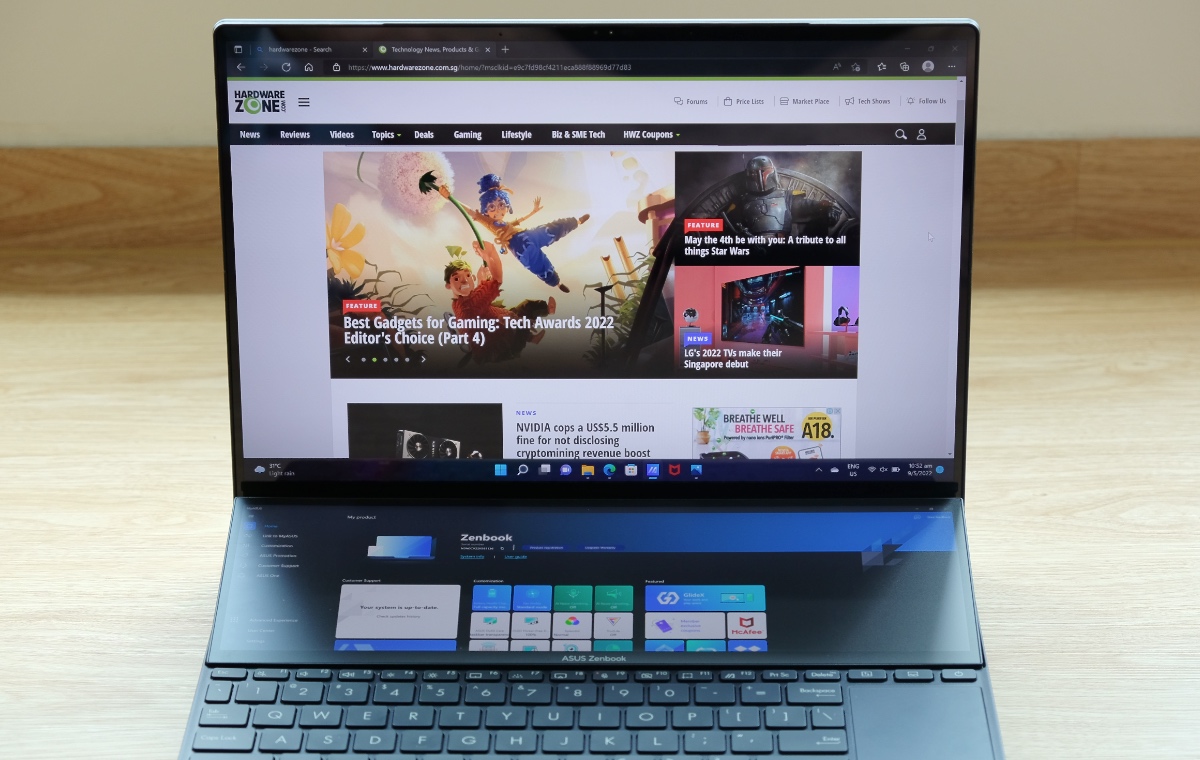 The way it works is the same. There are specific shortcuts for a handful of selected apps like Adobe Photoshop and Premiere Pro, and there are also shortcuts to quickly reposition and rearrange your windows and apps. However, I suspect most users would use it simply as an extended display for secondary apps that they might want to keep tabs on or have quick access to. 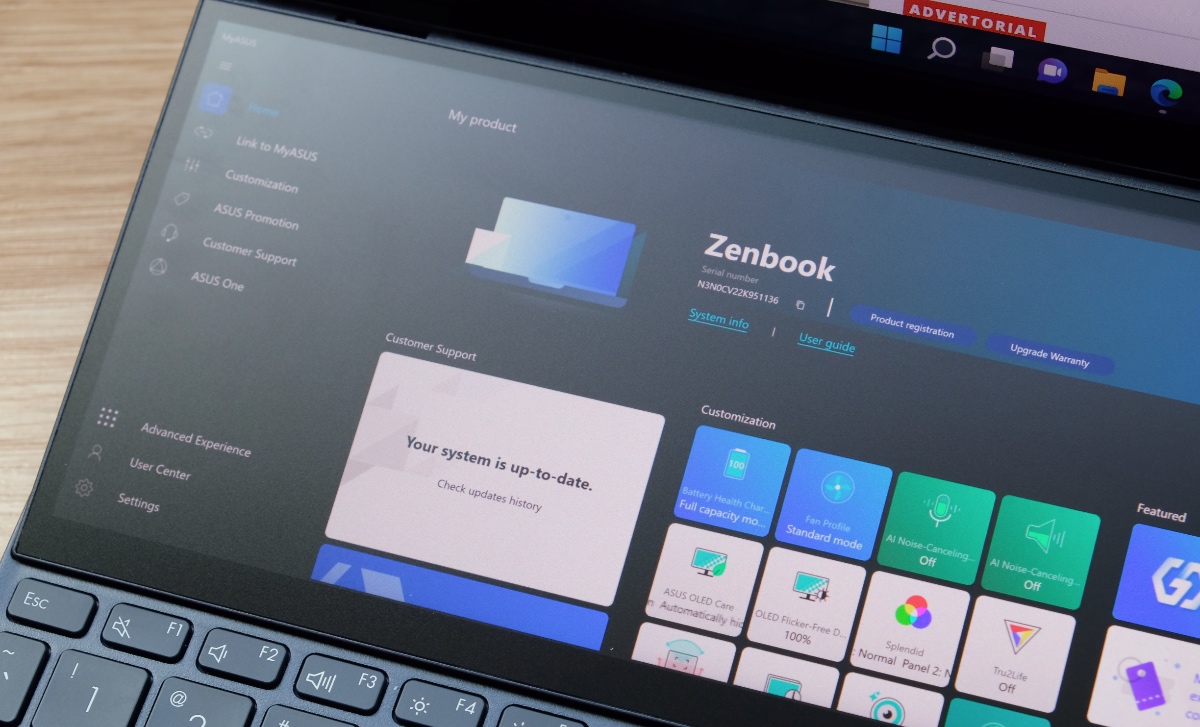 On the whole, the displays on this notebook are a huge step-up over its predecessor. The OLED main display, in particular, is wonderfully sharp, crisp, fluid, and vivid. It’s easily one of the best displays I’ve seen in a notebook. And even though the secondary display can’t quite match the quality of the main one, it isn’t bad at all. It’s substantially sharper and brighter than its predecessor’s and is, therefore, more legible and useful. 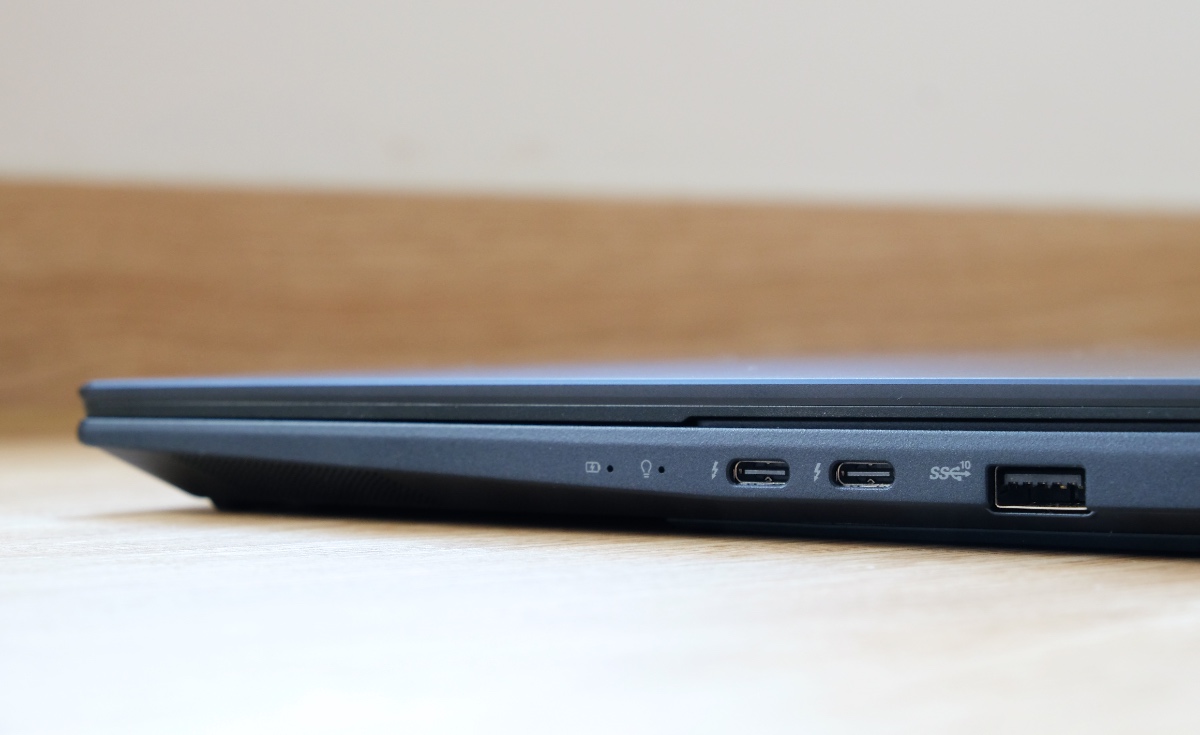 The arrangements of the ports are also slightly different. They used to be only at the sides but the back of the notebook now houses the DC jack, a full-size HDMI 2.1 port, and a microSD card reader. On the right, you have two USB-C Thunderbolt 4 ports and a single USB-A USB 3.2 Gen 2 port. On the left, you have a 3.5mm audio combo jack. The port selection is good and can hardly be faulted.

What hasn’t changed, however, are the keyboard and trackpad. The position is not ideal and the size of the trackpad is small, which is a pity because the actual hardware is good. The keys feel good because they are tactile and have sufficient travel, and the trackpad is accurate and responsive. There’s no way to sugarcoat this, you’ll need to put in the effort to get accustomed to the layout. Left-handed users, in particular, will surely find the location of the trackpad a pain. 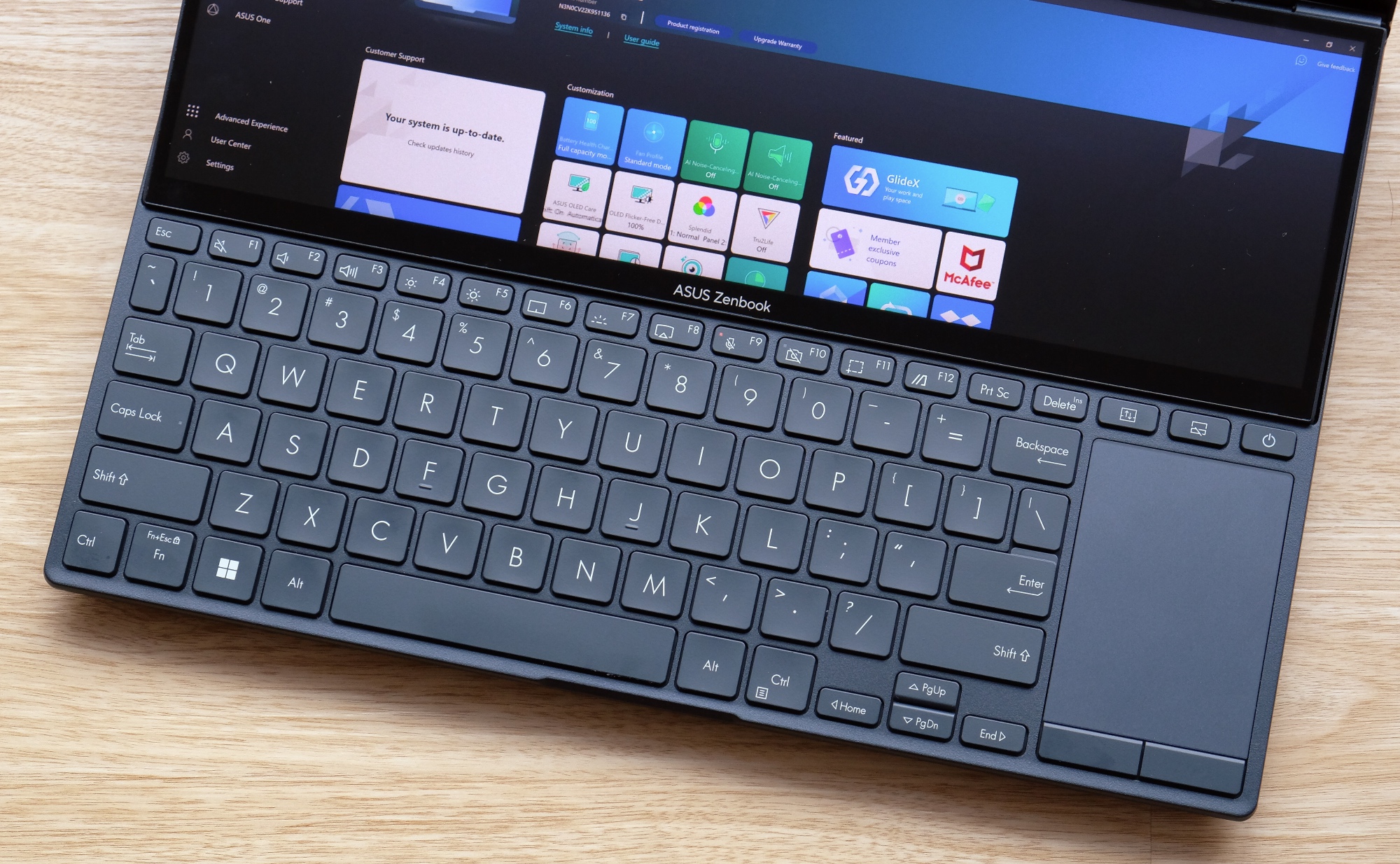 ASUS is also rather proud of the ZenBook Pro 14 Duo’s sound system. It’s by Harman Kardon and it features “smart amplifiers” with DSP that enhance volume by up to 350% while minimising distortion. To be fair, the speakers do get very loud. And even at high volumes, they sound clear with little distortion. However, the bass is particularly weak. They’ll suffice if you find yourself away from your work desk and with no headphones or earbuds to use, but I won’t want to use them for critical listening.