Since the ZenBook Duo UX482 is powered by mostly the same components that are found in most of today’s ultraportable notebooks, we’ll be comparing it closely against notebooks like the ZenBook 14 Ultralight, Dell XPS 13, Lenovo Slim 7i Carbon, and more. Will ASUS’ AIFT and AAS+ technologies really help boost performance? Let’s find out.

First, let's see how they stack up:

The performance of the ZenBook Duo UX482 was generally excellent. It was first or close to the top in nearly every benchmark. Graphics performance was very impressive. In Tomb Raider, it produced consistent frame rates and was over 30% faster than the other notebooks even if it has the same class of graphics processor. What’s fascinating is that it has the same NVIDIA GeForce MX450 discrete GPU as the ZenBook 14 Ultralight, which goes to show just how big a role cooling systems play in modern notebook design.

That said, ASUS’ claims of up to 40% better performance may be a little optimistic. While it managed to maintain these claims in the Tomb Raider game, such leaps are not the norm as seen on other tests where gain are 10% or less. Even in Performance mode, scores in CPU-intensive benchmarks like Cinebench and Geekbench only went up marginally more than usual. On Tomb Raider, I saw little difference in frame rates when engaging this mode. Also, it must be noted that the fans get loud when the notebook is taxed. No doubt some users will find the noise bothersome. 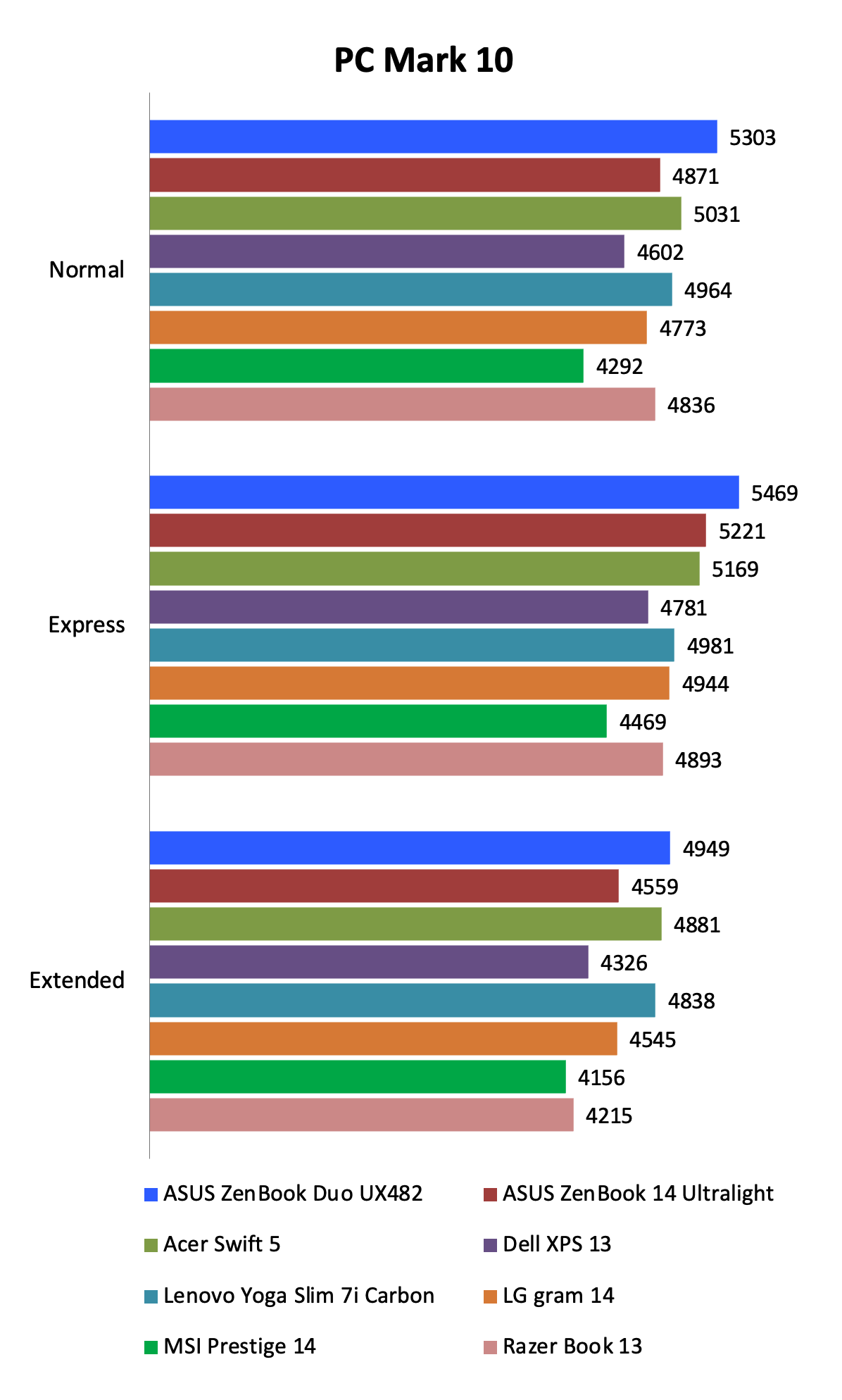 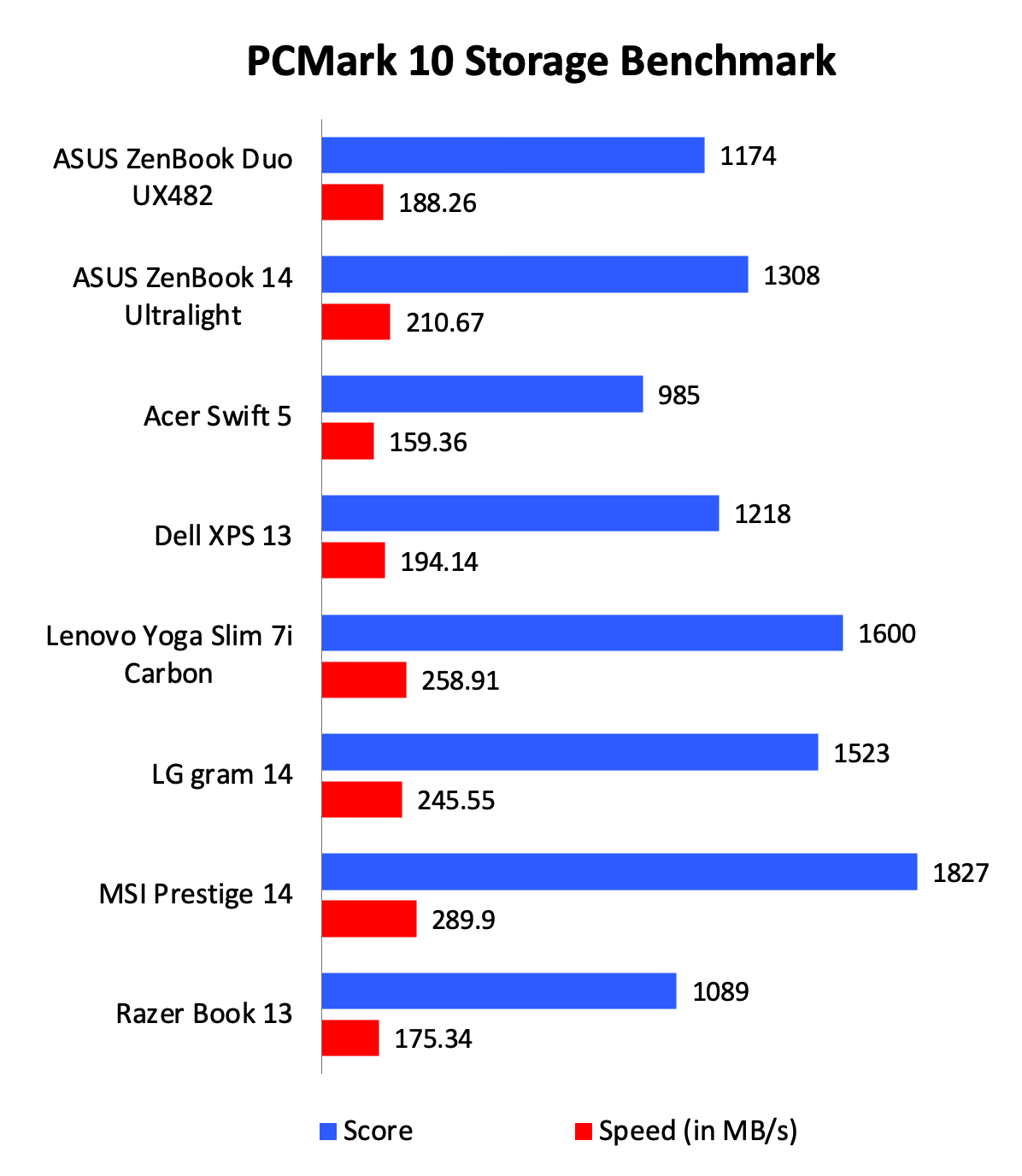 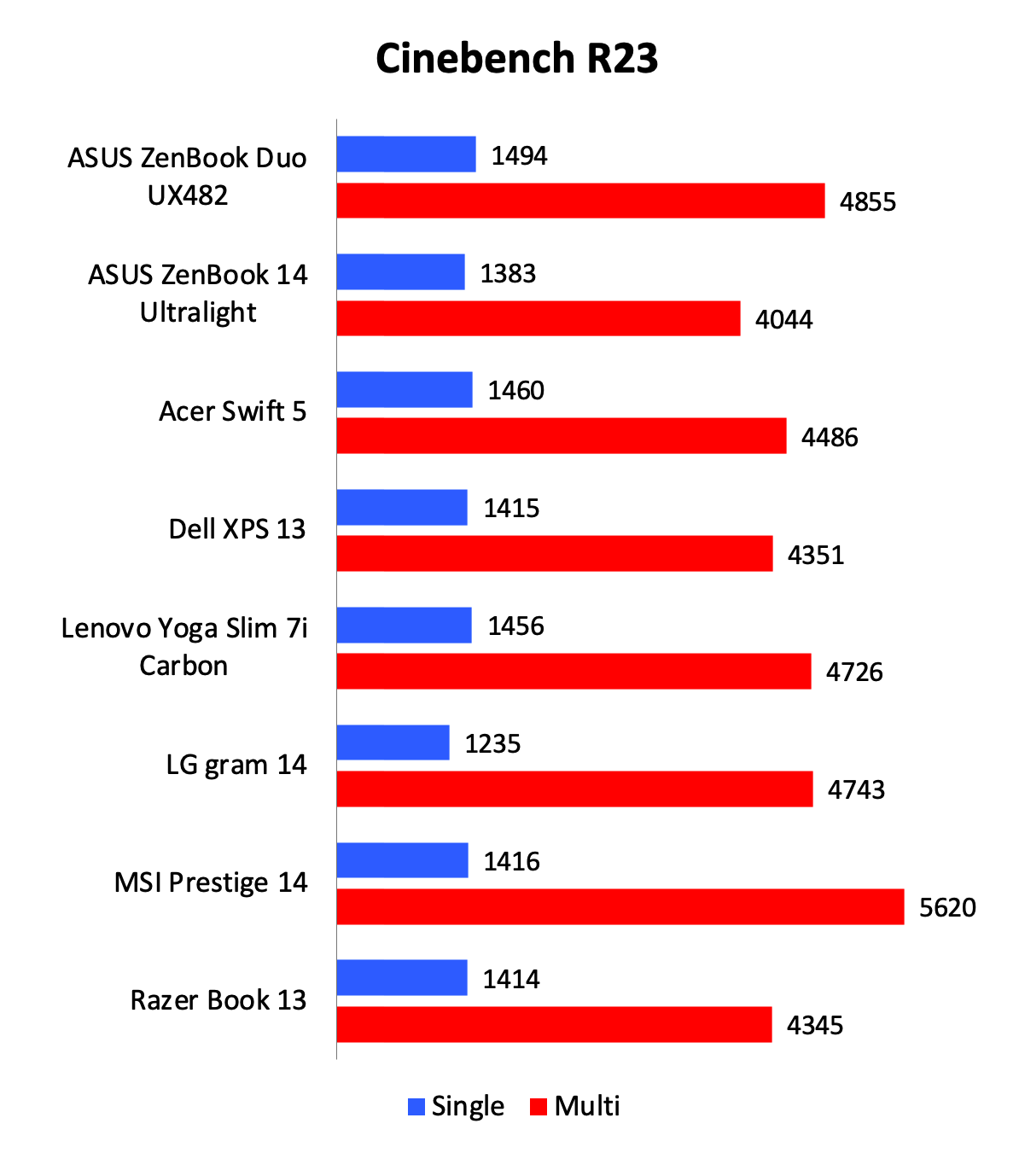 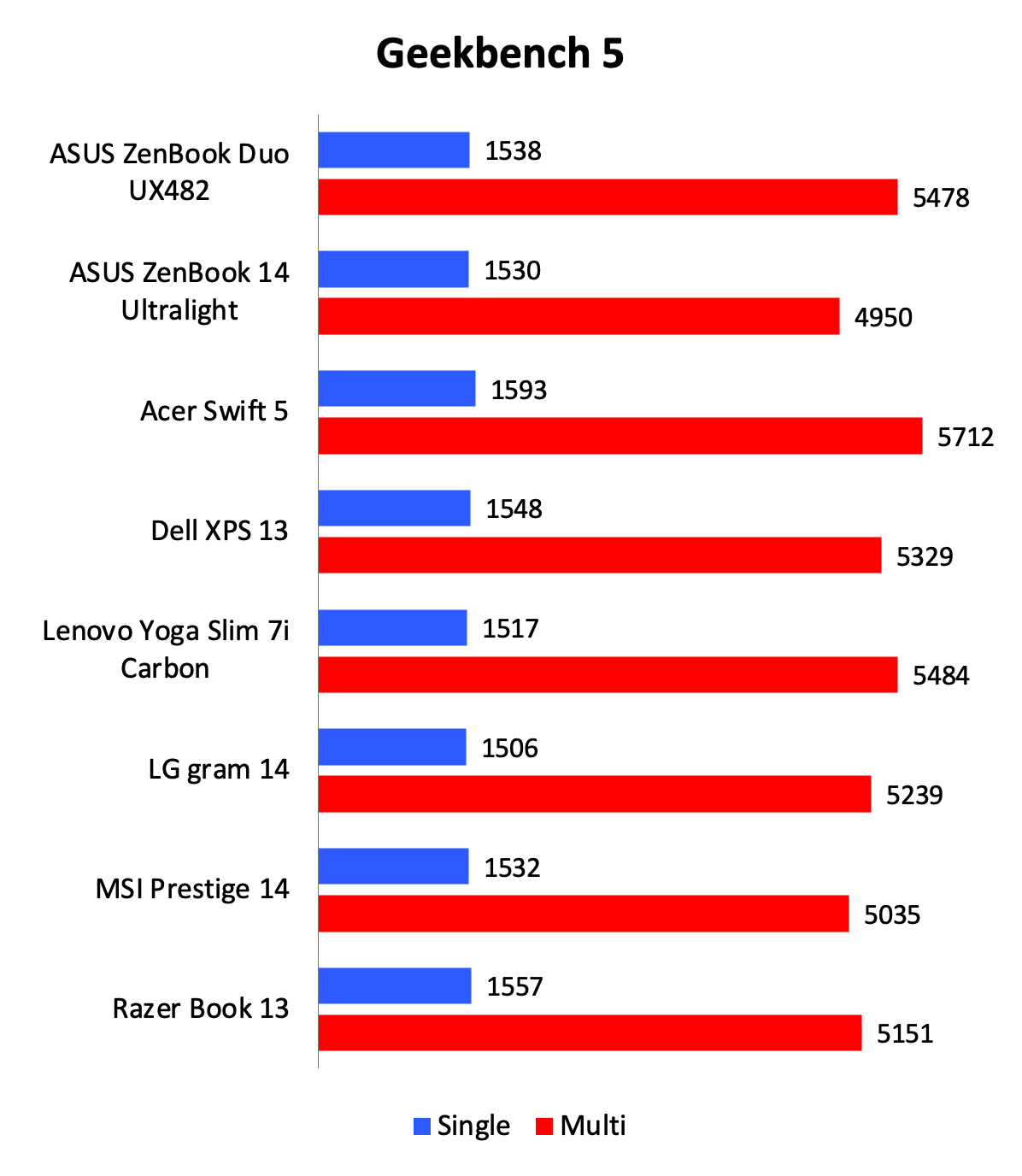 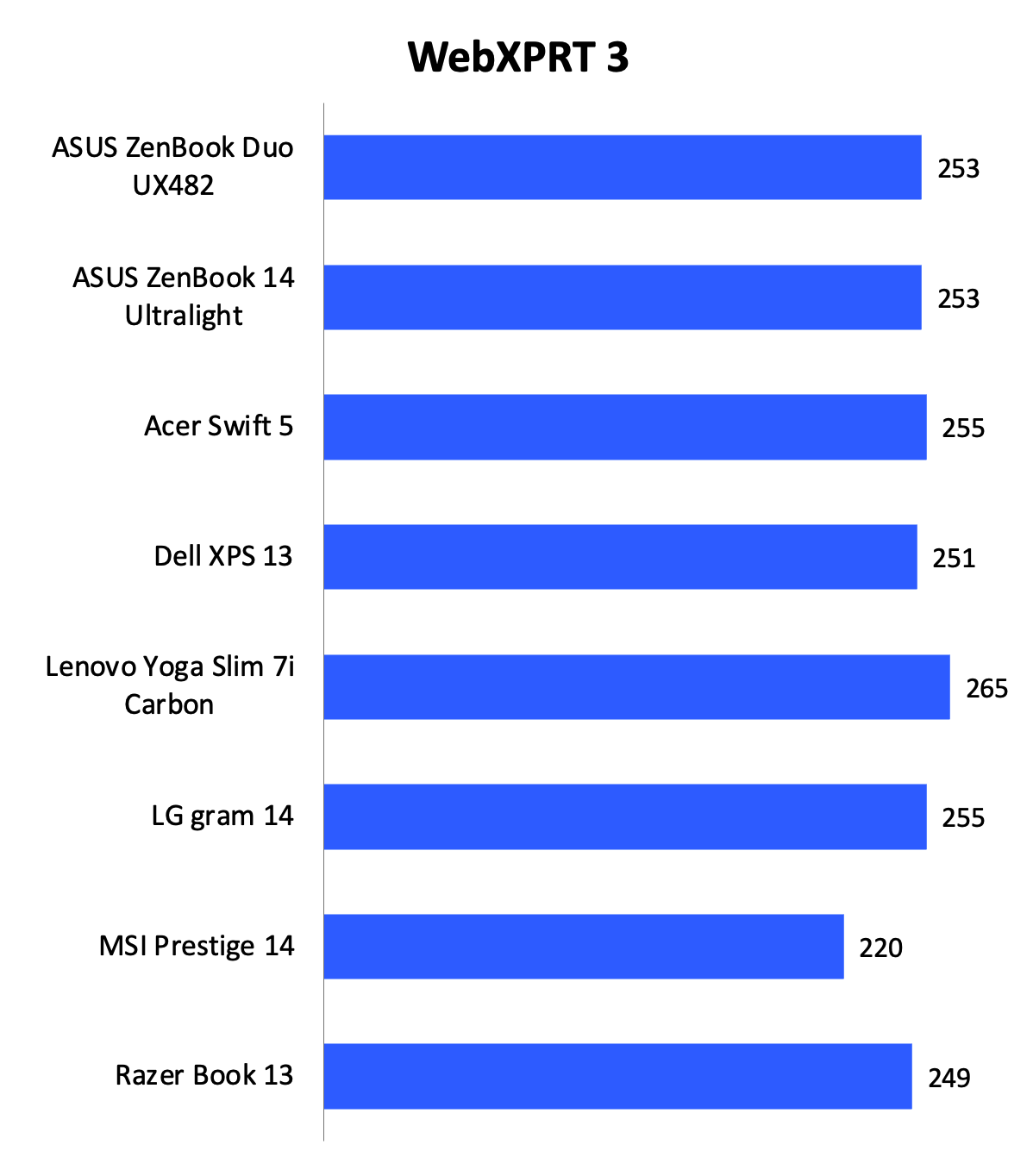 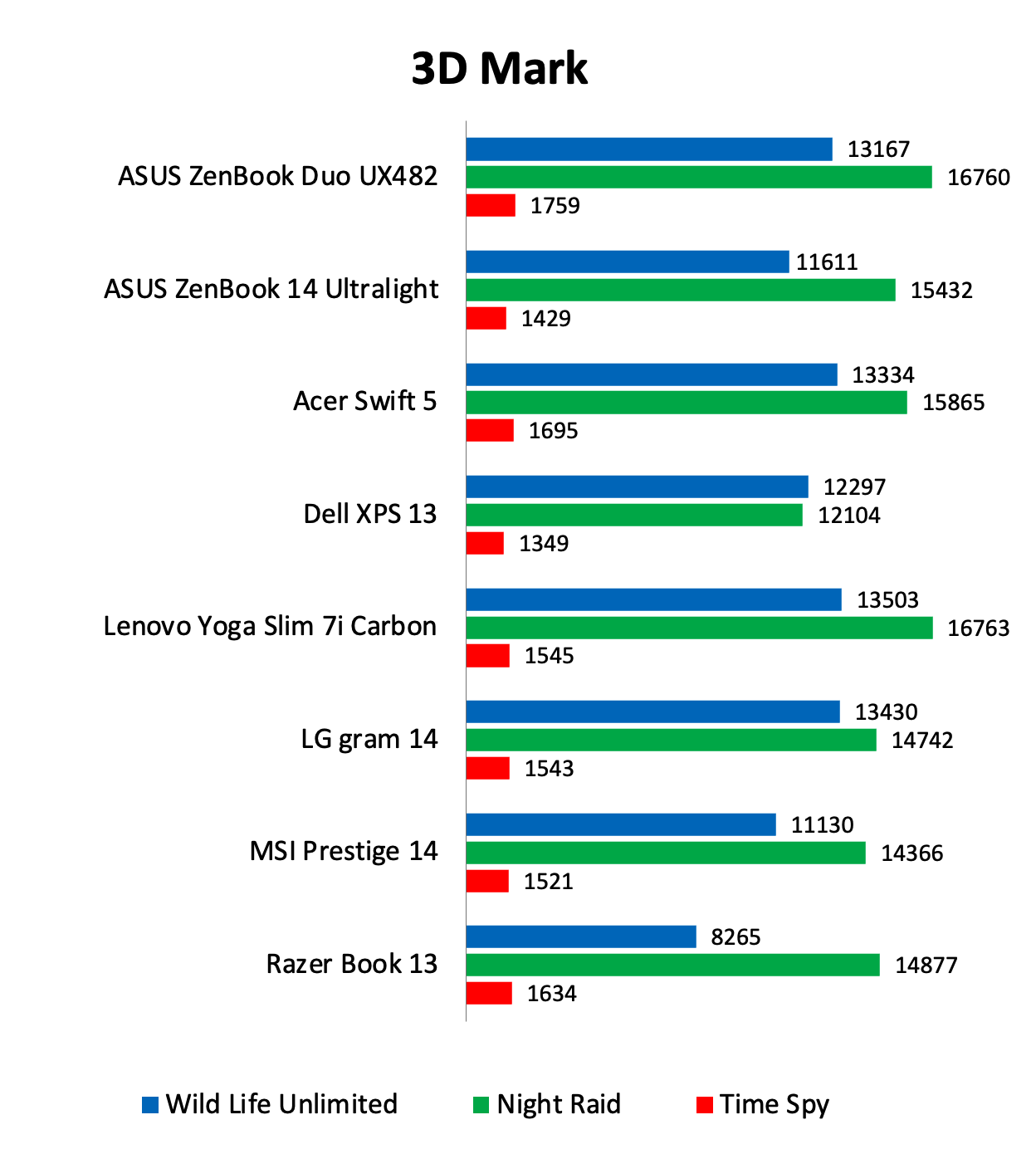 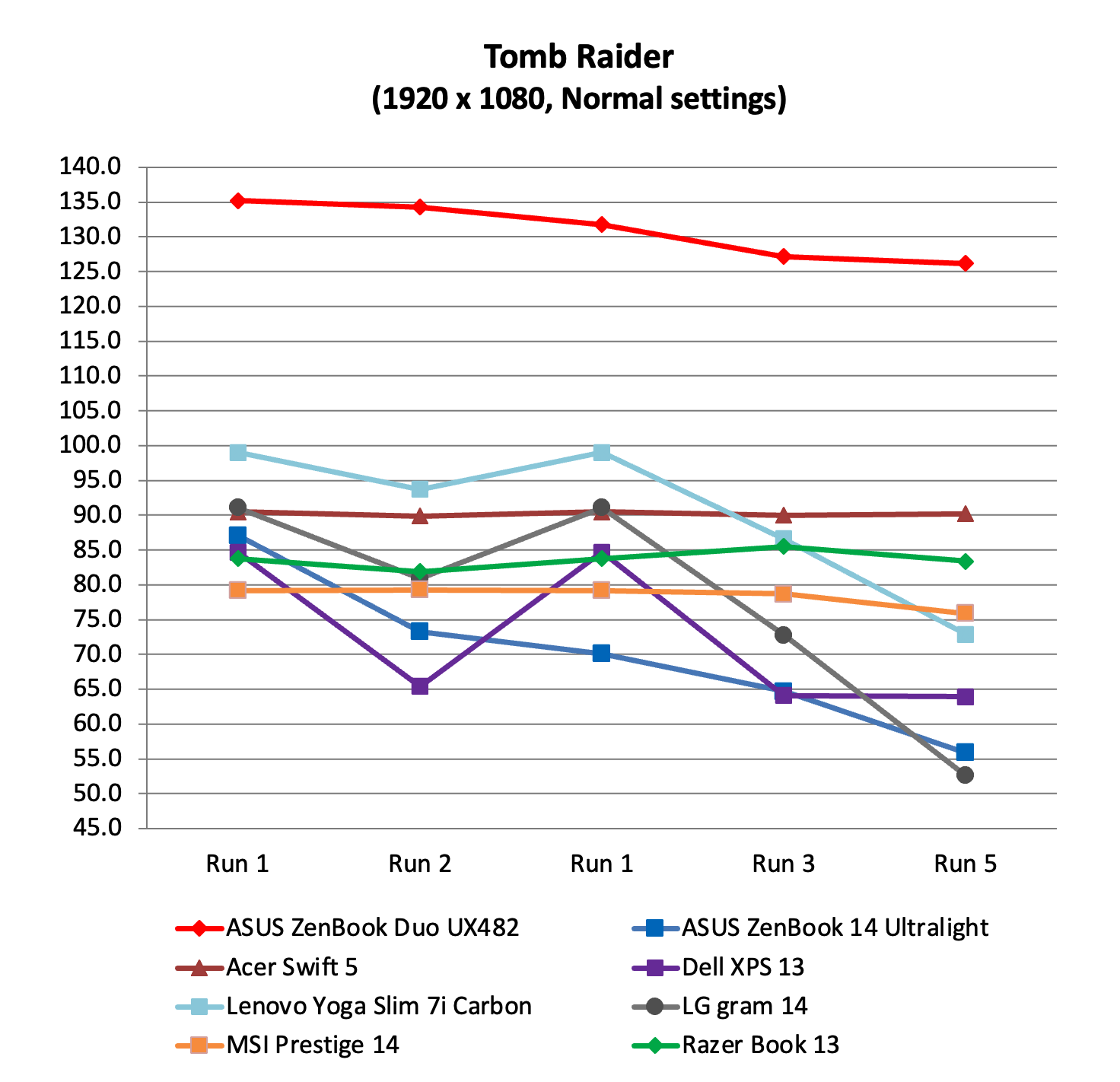 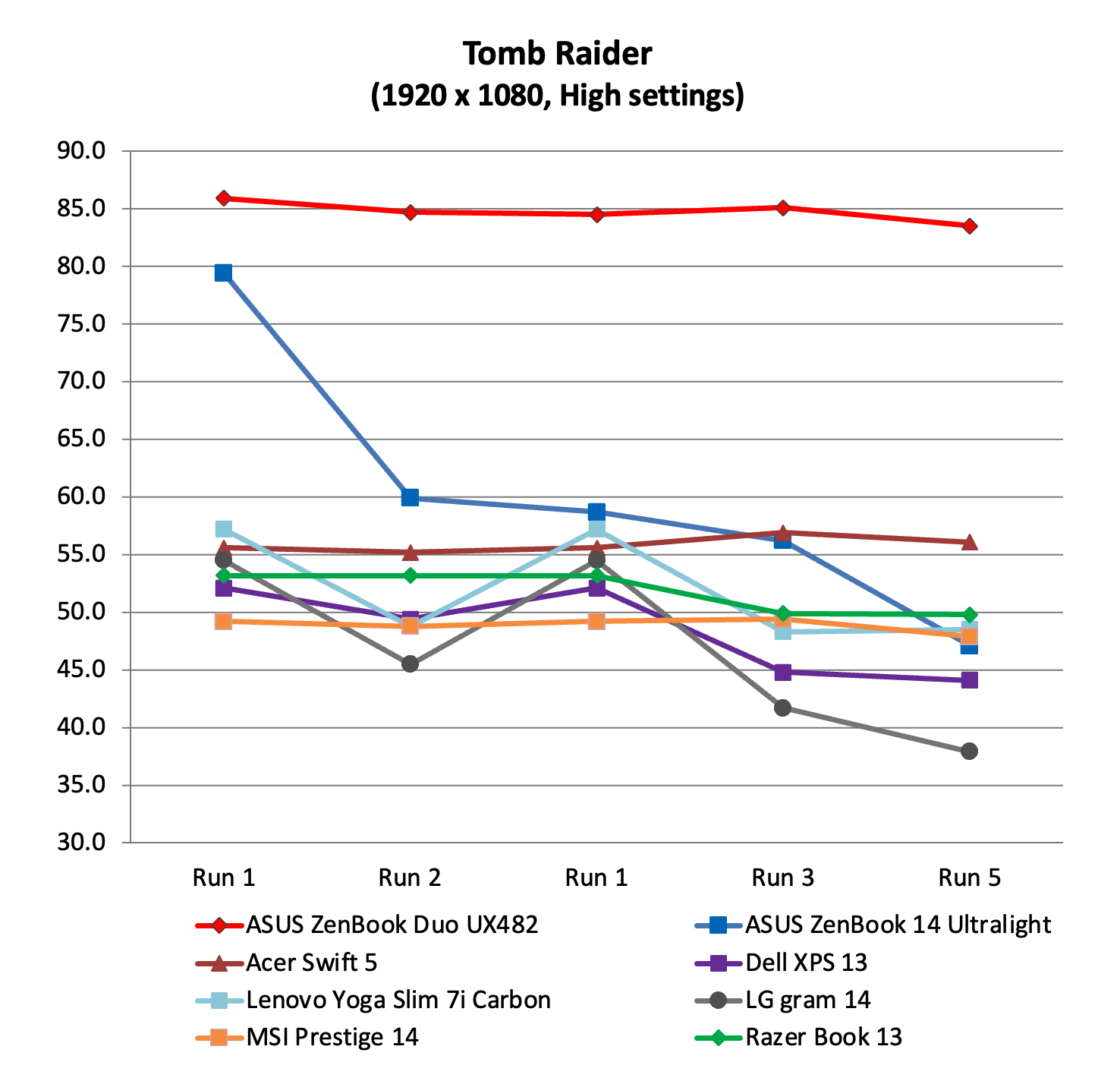 What’s interesting is how it managed to last longer than the ZenBook 14 Ultralight when it came to gaming. Even more impressive is how it managed better portability scores than some other ultraportable notebooks like the MSI Prestige 14 and Razer Book 13. This is largely because of its much slimmer design, thus drastically reducing its volume over its predecessor and giving it a pretty big leap. 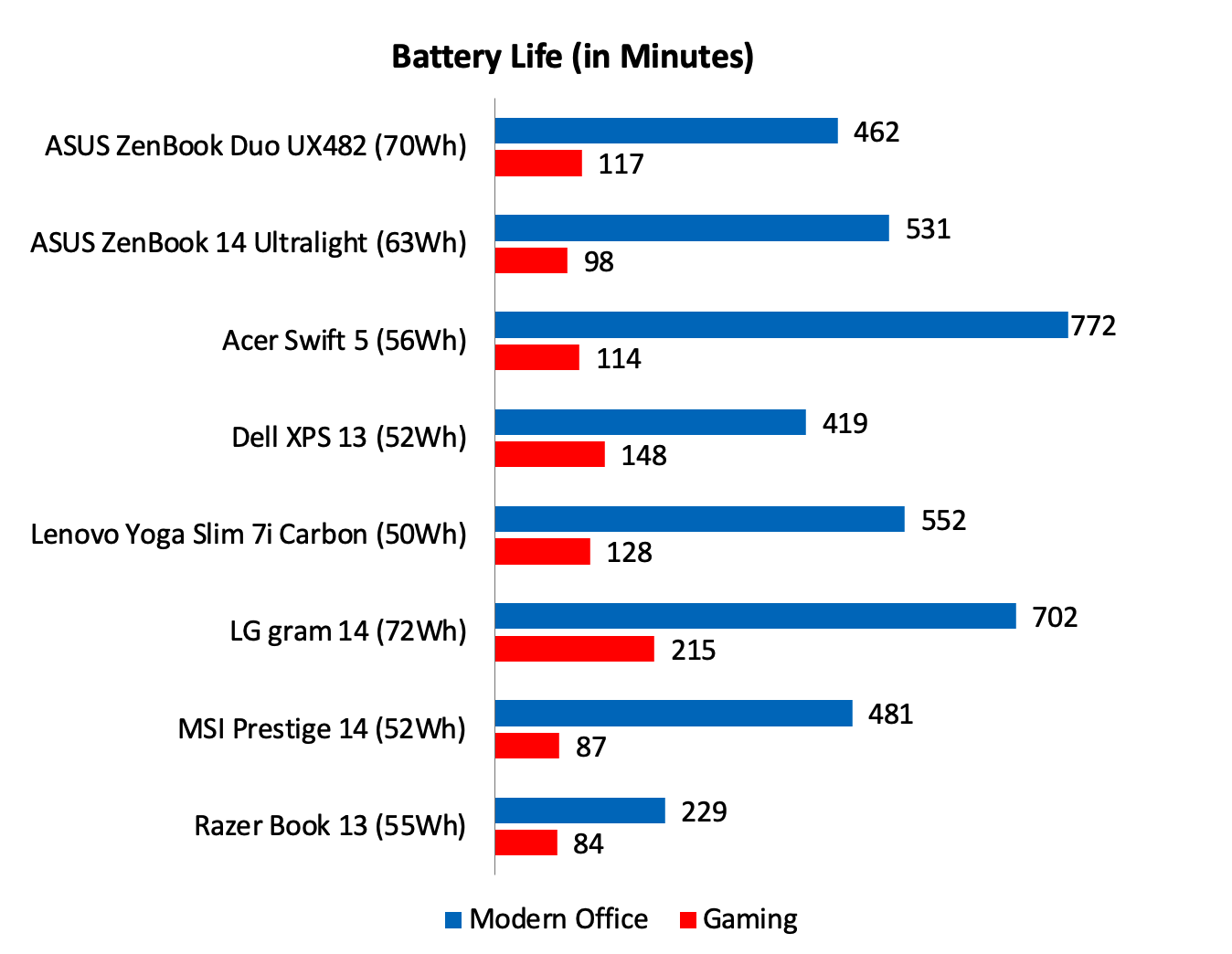 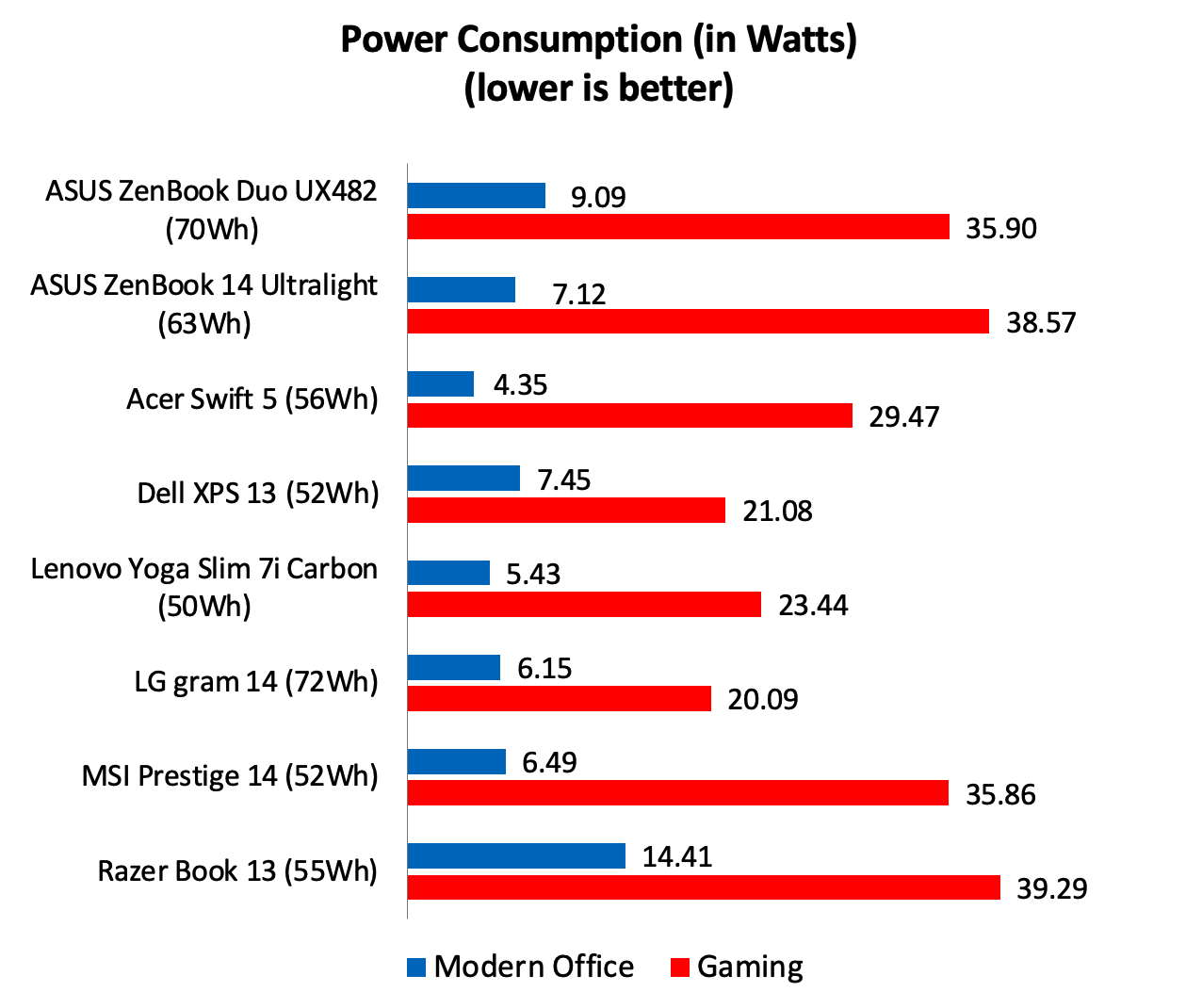 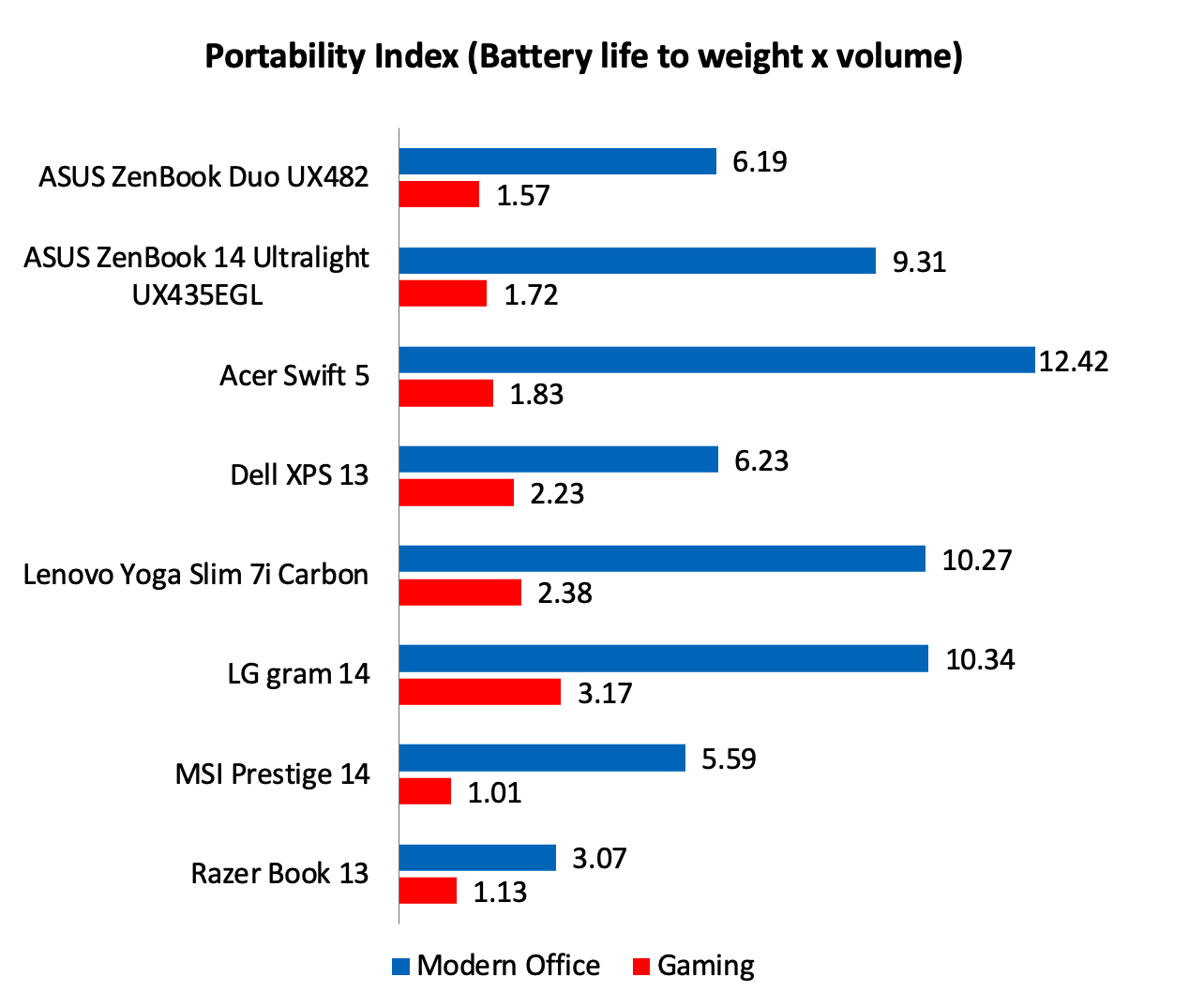 The answer, as it’s so often the case is, it depends. It’s hard to deny that this is a better notebook than its predecessor. The combination of the latest CPU and GPU means better performance. Plus, the improved cooling system and slimmer notebook design have allowed the ZenBook Duo UX482 to deliver much higher sustained peak performance than other 14-inch counterparts, while managing to boost its portability ratio by nearly double the standings of its UX481 brother from the previous year.

Most of all, the dual-display experience has been improved substantially with the clever new hinge mechanism and better app support. It’s a lot easier to see and therefore it’s a lot more helpful.

That said, there’s room for improvement. Crucially, ASUS can further improve the dual-display experience by using a brighter panel for the secondary display. The keyboard and trackpad are still somewhat compromised, but I’ll concede that this is probably the best that can be done. Short of massively increasing the footprint of the machine (in which case, there's the UX582 big brother) or removing the keyboard and trackpad entirely and asking owners to provide their own, I just don’t see how it’s possible to improve on the situation.

If you are considering this notebook, the question to ask yourself is: are the dual screens so important and beneficial that I’m willing to overlook the odd position and layout of the keyboard and trackpad? 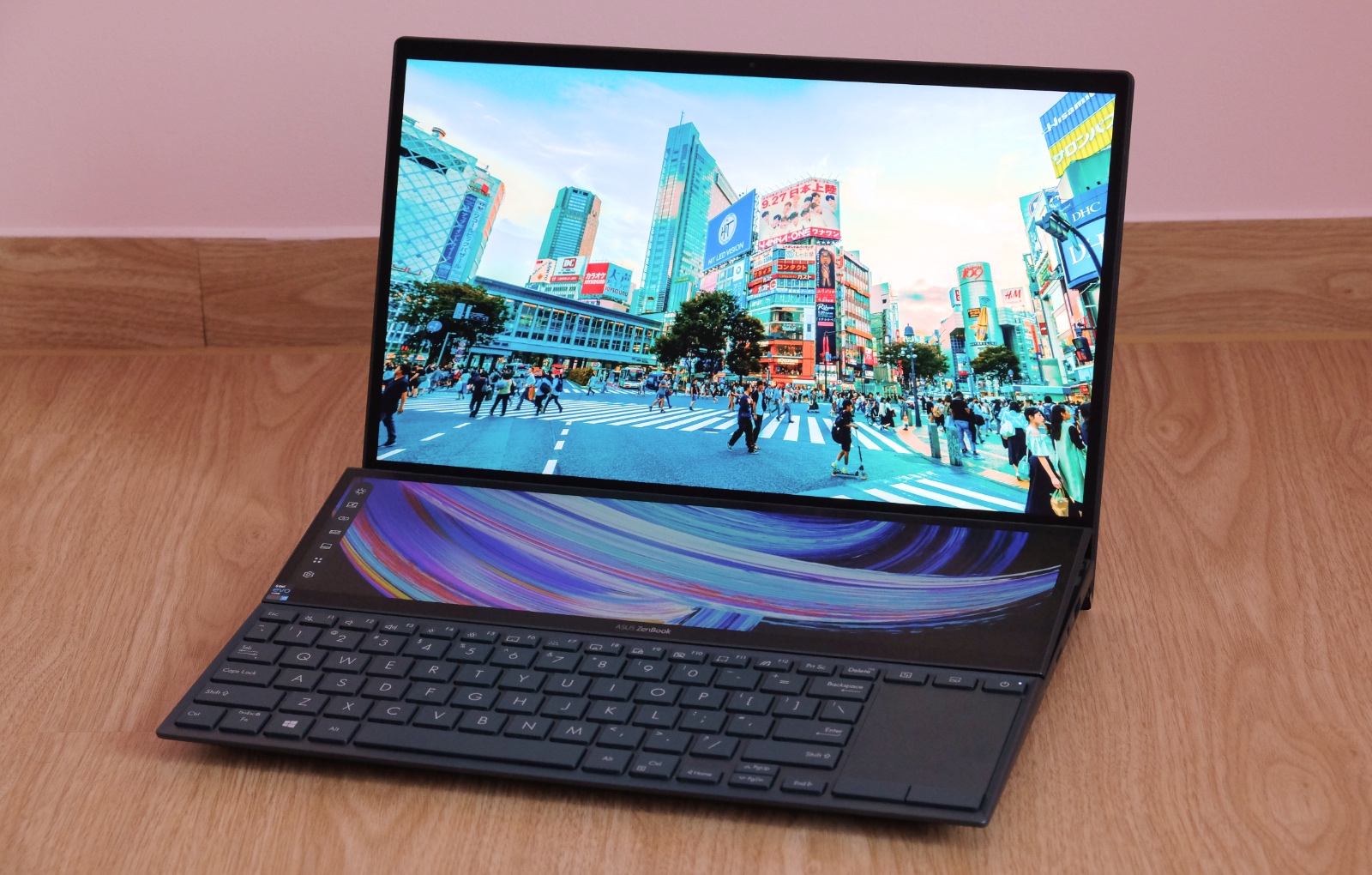 If the answer is in the affirmative and you are committed to overcoming the limitations of the keyboard and trackpad, then there’s actually quite a lot to like about this notebook. As I said, performance is good, battery life is decent, and the notebook itself, despite its twin screens, isn’t bulky and heavy. Best of all, it isn’t even crazily priced. The ZenBook Duo UX482, with the specs as tested, is S$2,598. To provide some context, that’s just S$200 more a ZenBook 14 Ultralight with similar specifications, better performance and double the screens.

In the end, one must applaud ASUS for sticking with and improving their line of dual display notebooks. Fundamentally, the ZenBook Duo UX482 is flawed (because of its design choices), but a select group of people who value screen real estate over everything else will find it perfect. One thing is for sure, you would definitely be surprised at how compact the notebook is considering it has dual displays.

Where can you get one?

Now, if you're ready to make the leap to improve your productivity, Courts is currently offering the ZenBook Duo UX482 at their e-store. So if you feel like checking it out personally before making the purchase, you can also visit their bigger stores to ascertain the notebook's fit for your usage. Challenger is also stocking it through Hachi.Tech. Even the ASUS store doesn't stock this model yet and is now exclusively sold by other authorised retailers.

If you don't mind half the storage capacity and RAM, Amazon has another UX482 SKU stocked for less than $2k (inclusive of free shipping), but we don't think it would bode well for power users, which this model is set out to appease. Note that it ships from the US, hence you would be out of luck to get any free aftersales locally.

Write a Review
Compare This | Specifications
Genuinely clever packaging
ScreenPad Plus can be useful
Great specs and performance
AAS+ cooling system
Good connectivity options
Reasonably priced
Portable for a dual-screen notebook
Compromised keyboard and trackpad
Main display only Full-HD
ScreenPad Plus is too dim
Fans get loud when system is taxed
Our articles may contain affiliate links. If you buy through these links, we may earn a small commission.
Sponsored Links