Note: This review was first published on 29 Mar 2021 and has its ratings updated after further analysis of its positioning, and performance leaps over its predecessor. 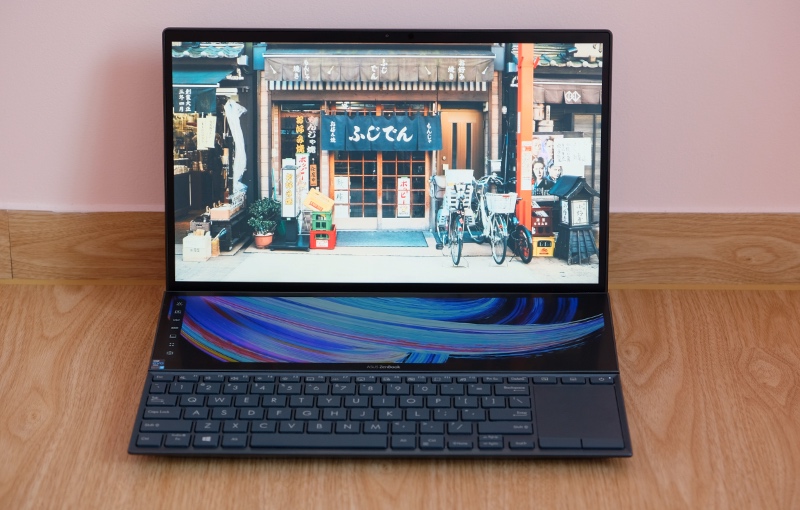 In February, I got the chance to play around with an early engineering sample of the ZenBook Duo UX482. Now, I have a retail version to test.

You can read my hands-on here. But to recap, the ZenBook Duo UX482 is ASUS’ second-generation dual-screen ultraportable notebook – the first being ZenBook UX481. 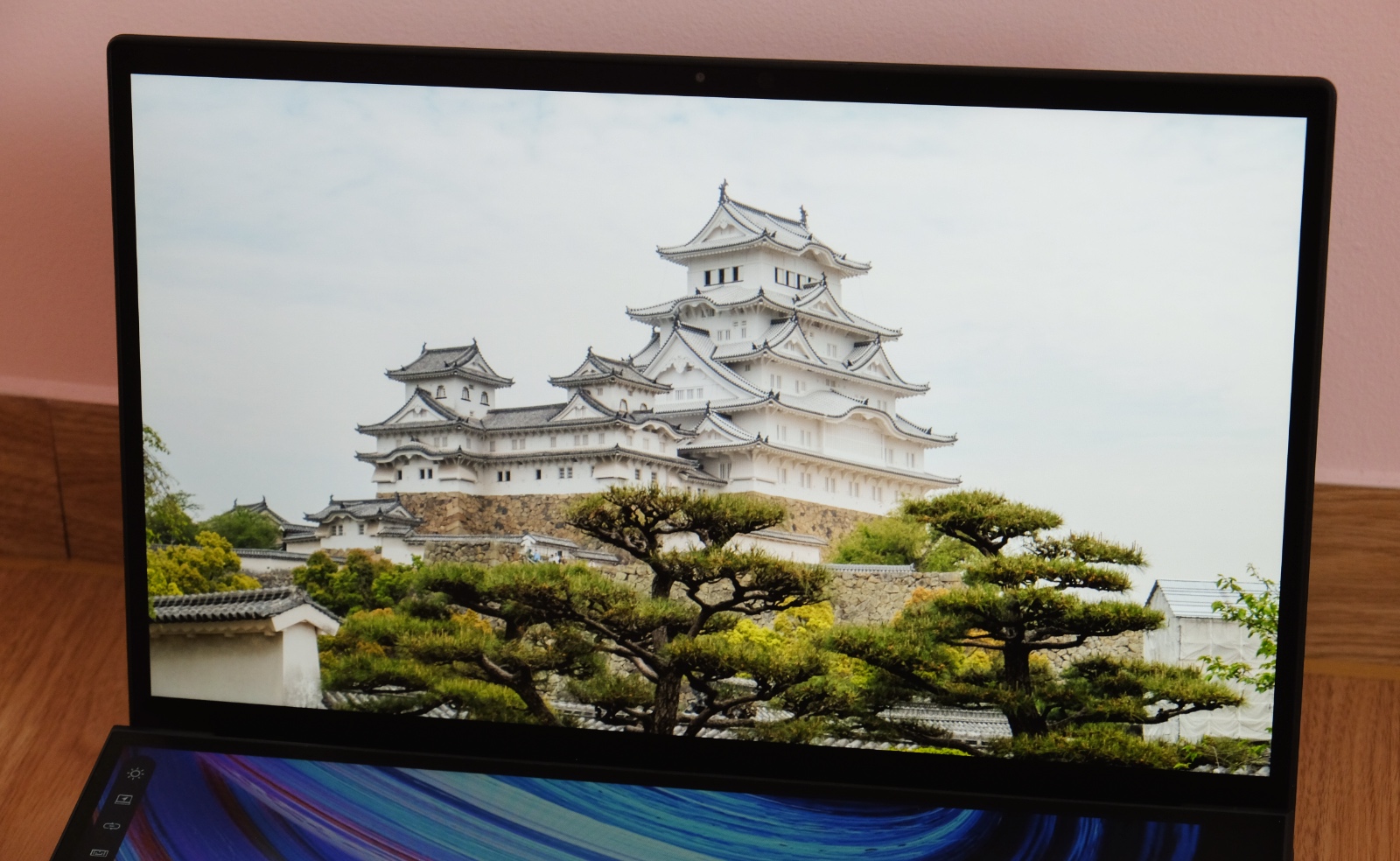 The main ingredients of the ZenBook UX482 and its principal idea haven’t changed: cramp two screens into as small a body as it's physically and technologically possible. And to be frank, ASUS has mostly succeeded. It isn’t that much bulkier than the recently launched ZenBook 14 Ultralight, which is pretty incredible to think about what you get out of the UX482. Thickness is 17.3mm and weight, thanks to a mostly magnesium-aluminium alloy body, is 1.6kg. It’s heavy compared to the most portable ultraportable notebooks, but entirely reasonable given that it has two screens.

The sizes and display resolutions of the two screens are unchanged. The main screen is 14 inches large and it’s Full-HD resolution. The secondary display, or ScreenPad Plus as ASUS calls it, is 12.6 inches across and has a resolution of 1,920 x 515 pixels - that's about half the size of the main display (and vertical resolution).

While the physical aspects are largely the same, improvements have been made to the user experience. The main screen now supports touch inputs to bring it in line with the secondary display. No more second-guessing which screen supports touch input when you're middle of a busy task. Next, the secondary display now has a new hinge mechanism that lifts to give it an additional seven degrees of tilt. That might not sound like much, but the end result is that the main display now flows more seamlessly into the secondary display and the added till really makes the screen much more visible. It still doesn’t quite look like one big display – the ScreenPad Plus is significantly dimmer than the main display – but it’s getting there.

Other ScreenPad Plus enhancements 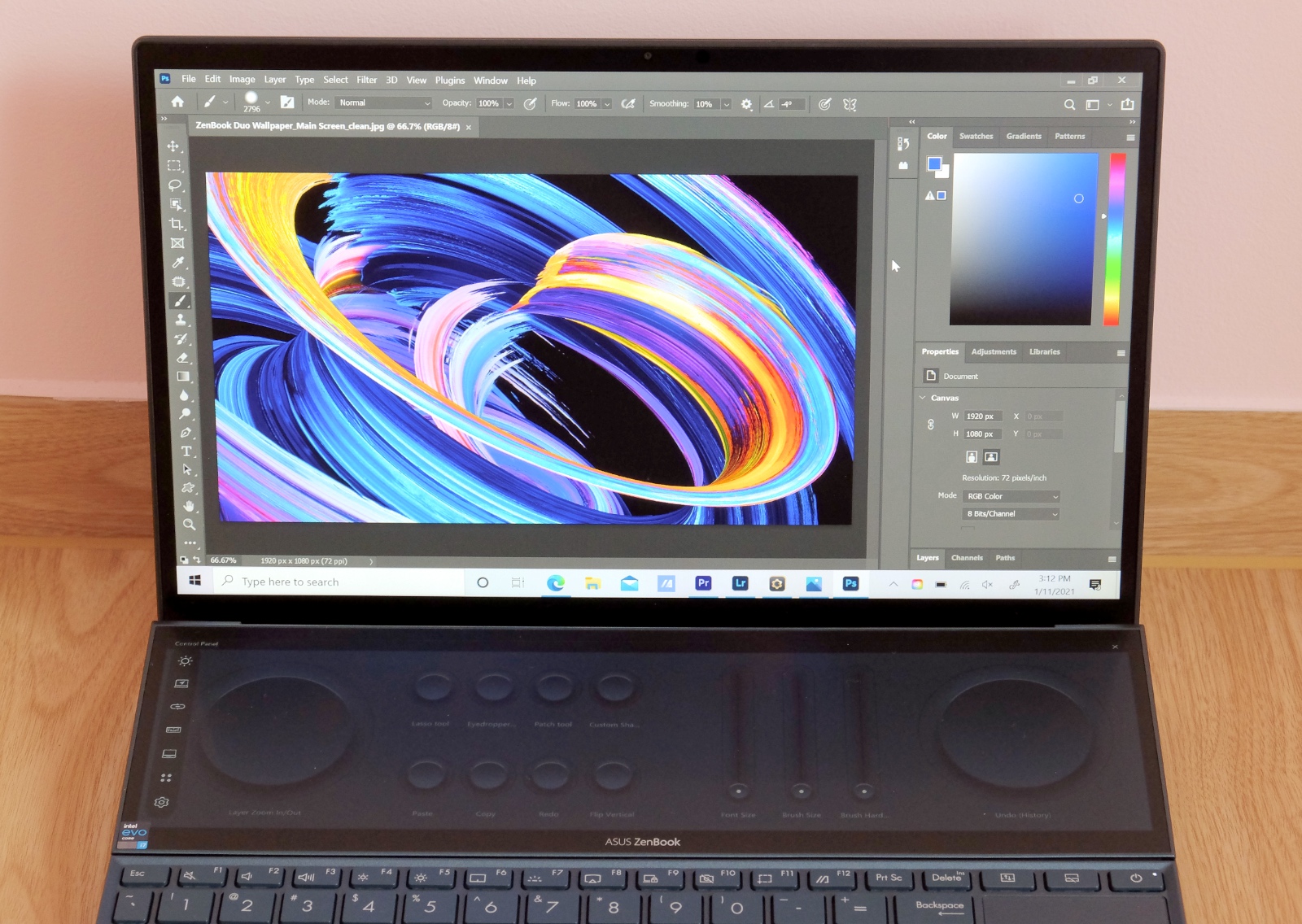 There are also software enhancements to the ScreenPad Plus. There’s now support for Adobe applications including Photoshop, Premiere, After Effects, and Lightroom Classic. When you open any of these apps, you’ll see customisable shortcuts on the ScreenPad Plus. Other improvements include a new ScreenXpert Control Center that manages settings pertaining to the ScreenPad Plus, the dock can now be repositioned or hidden entirely for a cleaner workspace. 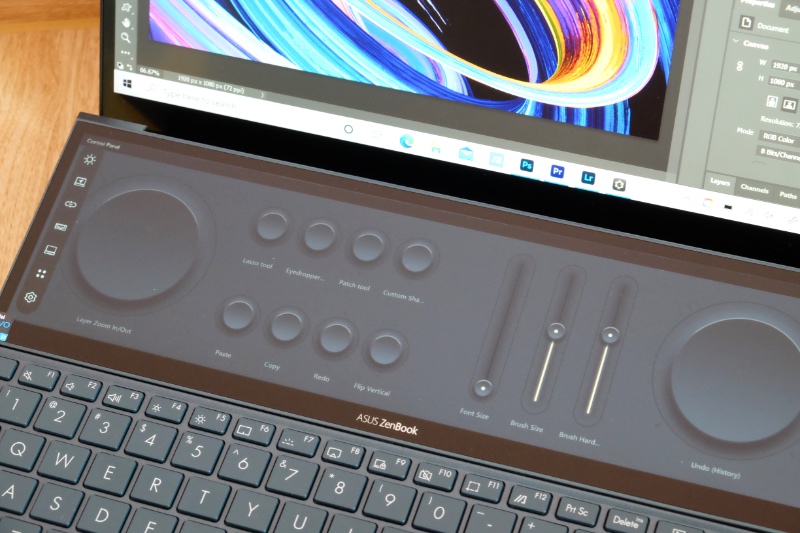 The ZenBook Duo UX482 is available in only one configuration and here are its key specs: 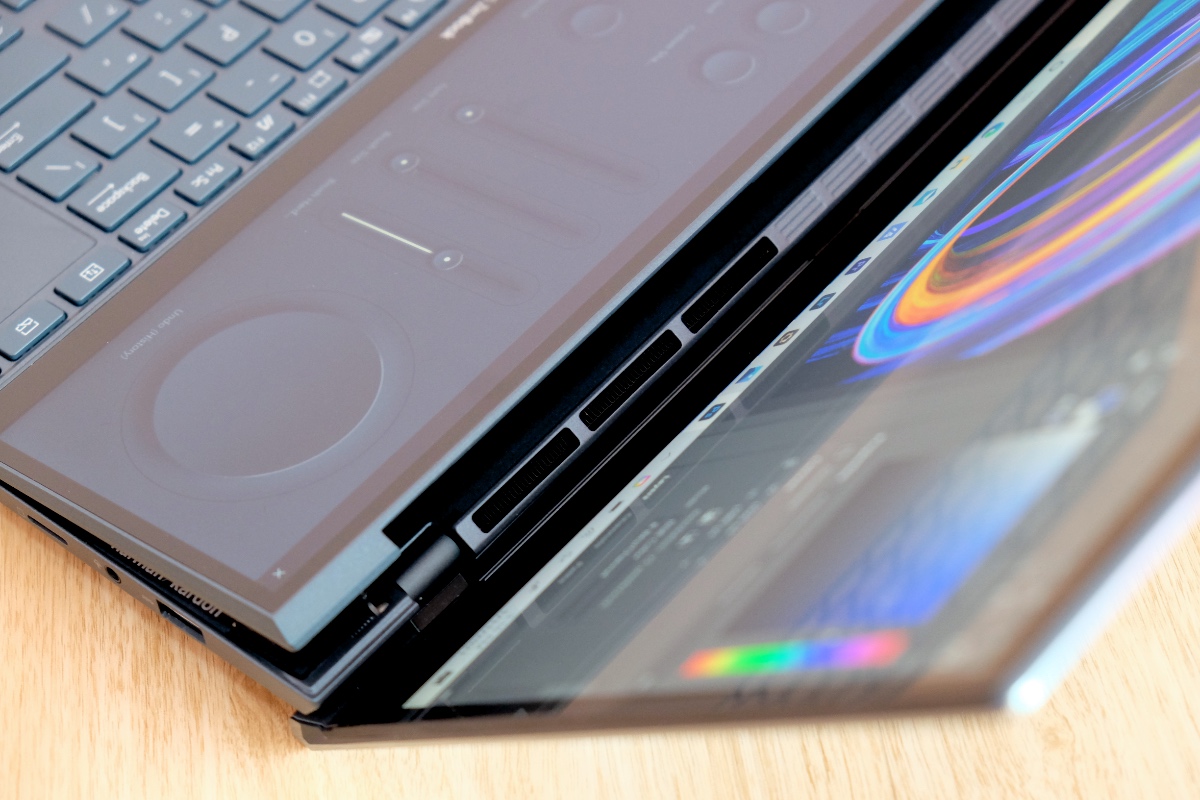 However, ASUS is confident this notebook will outperform similarly-spec’ed notebooks thanks to its ASUS Intelligent Performance Technology (AIPT) and Active Aerodynamic System (AAS+).

The former dynamically adjusts CPU power settings based on system loading status and temperatures to maximise performance and power efficiency, while the latter refers to the notebook’s enhanced cooling system. ASUS says the cooling system has been improved considerably. The two fans have 59 blades (up from 43) and they draw heat away from a heatsink that has a wider 10mm heat pipe. And because the ScreenPad Plus rises off the system, ASUS says it’s able to take advantage of that to improve overall airflow. It claims airflow is now up to 49% higher.

Together, ASUS claims AIFT and AAS+ can boost performance by up to 40%. Users can enjoy this improved performance by hitting Fn+F and activating the notebook’s Performance mode. It’s worth mentioning, however, that the fans get obnoxiously loud in this mode (headphones are recommended). There’s a Balanced mode for normal use and there’s also a Whisper mode for the times when you need the fans to be as quiet as possible. 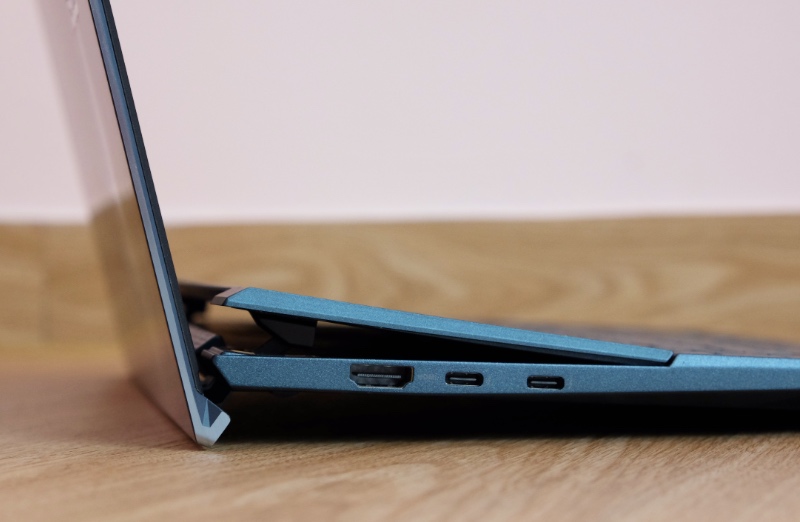 As for connectivity options, the ZenBook Duo UX482 seemingly has all bases covered. It has two USB-C Thunderbolt 4 ports, a USB-A USB 3.2 Gen 1 (5Gbps) port, a full-size HDMI port (1.4 not 2.0), and a microSD card reader. On the wireless connectivity front, the notebook supports Wi-Fi 6 and Bluetooth 5.0.

Some sacrifices have to be made to accommodate the secondary display and the most significant one is the repositioning of the keyboard and trackpad. Like its predecessor, the ZenBook Duo UX482’s keyboard is at the bottom edge of the notebook while its trackpad is off to the right.

The quality of the hardware is good. The keys themselves are actually quite nice to type on with a firm feel and quite sufficient travel, and the trackpad feels smooth and responsive. 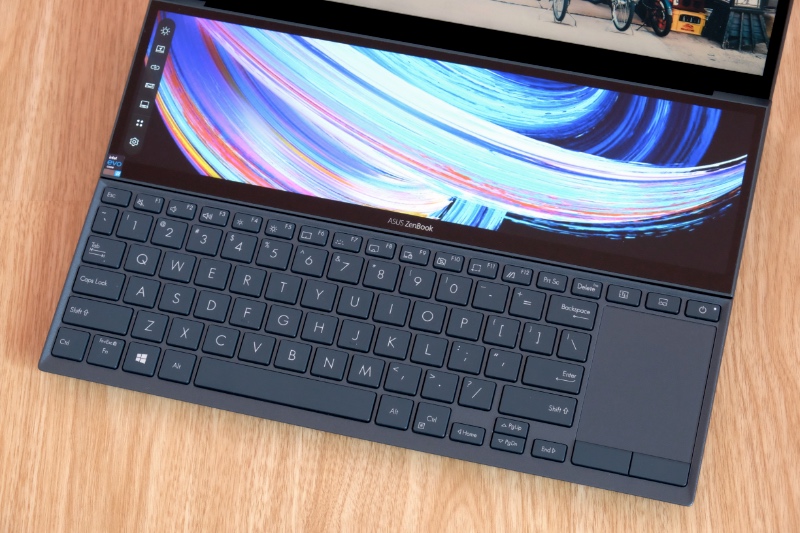 However, the keyboard and trackpad are obviously compromised. Left-handed readers will likely find the location of the trackpad a pain. Not to mention also that it is tiny. And if you have a lot of typing to do, a wrist-rest of some sort is highly recommended. And while most of the keys are of adequate size, two crucial ones – Backspace and Enter – are too small.

Still, ASUS has made some minor improvements. The size of the arrow keys have been reduced. They are now half-height and arranged in an inverted T formation so that users can more easily locate them by touch. As a result, the right Shift key is now larger. Since I use the right Shift to capitalise my words, I find this to be a much welcome change. This definitely shows that ASUS is listening and actively optimizing even the finer aspects to improve user experience.

Write a Review
Compare This | Specifications
Genuinely clever packaging
ScreenPad Plus can be useful
Great specs and performance
AAS+ cooling system
Good connectivity options
Reasonably priced
Portable for a dual-screen notebook
Compromised keyboard and trackpad
Main display only Full-HD
ScreenPad Plus is too dim
Fans get loud when system is taxed
Our articles may contain affiliate links. If you buy through these links, we may earn a small commission.
Sponsored Links