To evaluate the performance of the ZenBook 3 Deluxe, we will be comparing its performance against the ZenBook 3 and other comparable Ultrabooks like the Dell XPS 13 and HP Spectre. Bear in mind, however, that apart from the ZenBook 3, the rest of the Ultrabooks tested were powered by last year's Skylake processors, but they are still reasonable for referencing.

PCMark 8 tests a system’s performance by putting it through different tasks that reflect the workloads typical of various kinds of users, for instance the casual home user or the working creative professional. Looking at the numbers here, we can see that the ZenBook 3 Deluxe scored almost identically to the ZenBook 3, which isn’t surprising at all because the two notebooks that we've on hand have identical specifications. We can also see that the two of them managed to record significant leads in a good number of workloads like Home, Creative, Work, and Adobe, which is a testament to the performance advantage offered by the new Core i7-7500U Kaby Lake processor that is powering the two of them. 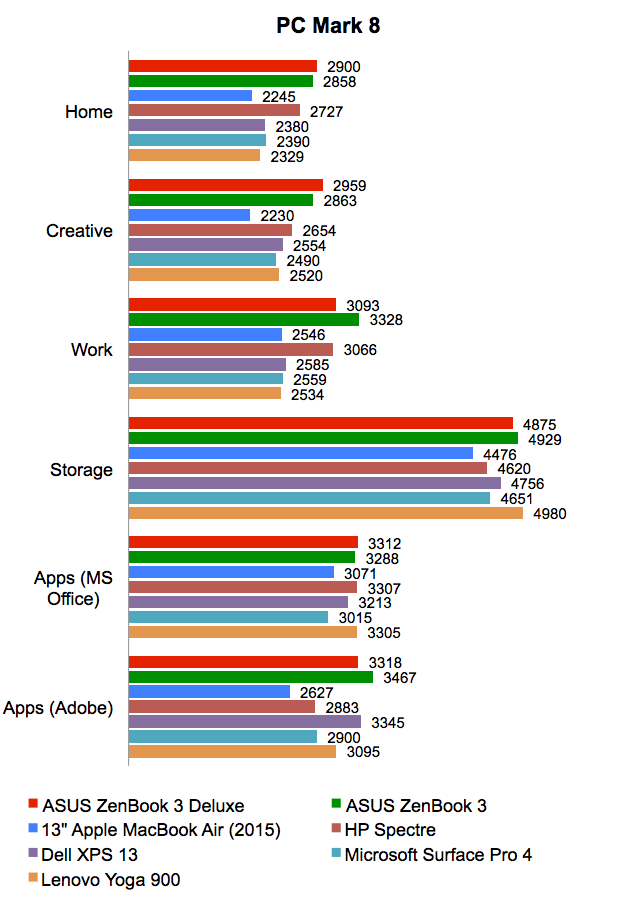 Intel promised modest graphics performance improvements with the integrated GPUs in its Kaby Lake processors and we certainly saw that here. The ASUS ZenBook 3 Deluxe easily managed the highest scores on 3DMark’s Cloud Gate scenario, recording a very decent 6532 points. On the more intensive Fire Strike scenario, the ZenBook 3 Deluxe and the ZenBook 3 were the only two notebooks to manage more than 900 points. Insofar as synthetic graphics benchmarks are concerned, the newer Intel HD Graphics 620 integrated GPU seems to have a leg up on the older Intel HD Graphics 520 integrated GPUs found on the other non Kaby Lake notebooks, but only by a small margin. 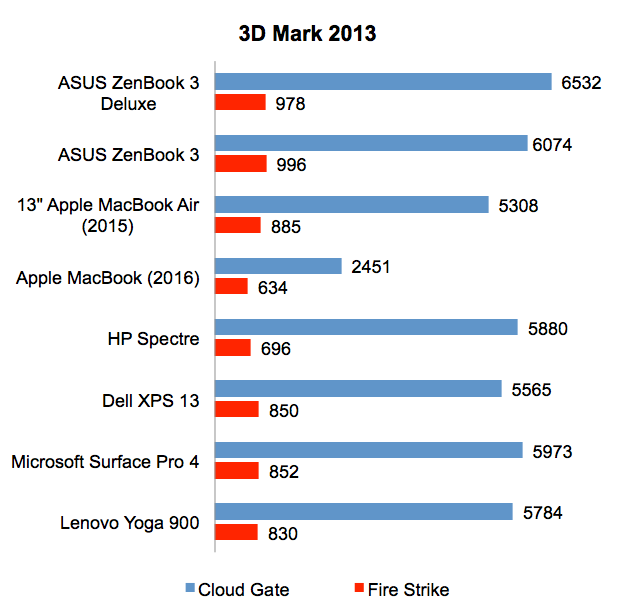 Far Cry 2 might be almost 9 years old now, but it still serves as a stern test for integrated GPUs. It was only very recently that integrated GPUs are capable of running Far Cry 2 at above 30 fps at Full-HD resolution. Here, the ZenBook 3 Deluxe managed 35.76fps on “Medium” graphics settings at Full-HD, which is a bit disappointing because we had expected it to do better based on its superior 3DMark scores. When we turned up the graphics settings to “Very High”, frame rates took a drastic dip to just 20.25fps. Overall, the ZenBook 3 Deluxe’s performance is just about the same as other Ultrabooks of its class. 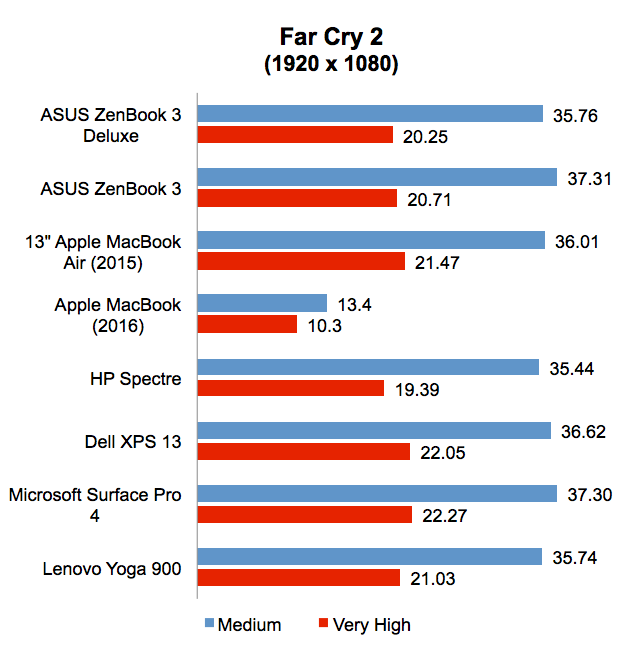 Released in 2013, Tomb Raider continues to be a menace for integrated GPUs, especially if you decide to play at Full-HD resolution, which, let’s face, should be the bare minimum for gaming these days. In any case, the ZenBook 3 Deluxe managed just 21.8fps running at Full-HD at “Normal” graphics settings. It was the fastest here by a considerable margin, if you discount the ZenBook 3 that is also powered by the same Intel HD Graphics 620 integrated GPU. 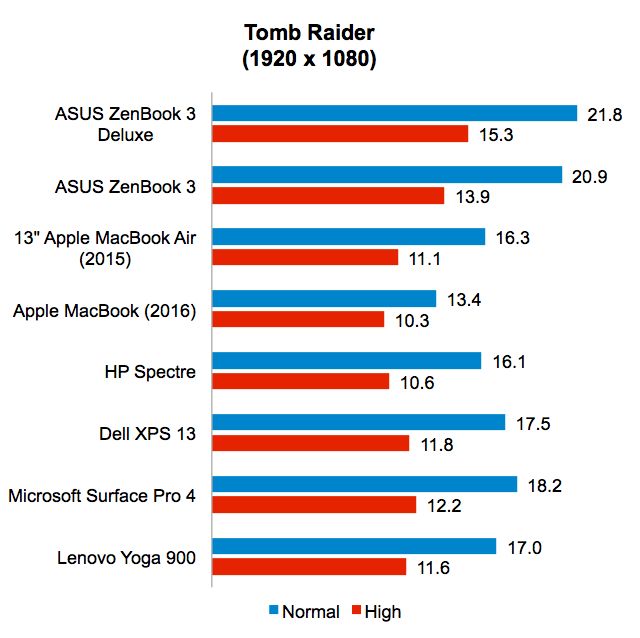 The ZenBook 3 Deluxe’s battery lifespan wasn’t great. It lasted just under 3 hours in our battery test or 178 minutes to be exact, which is also 36 minutes less than the ZenBook 3. There's two reasons why, the first is that its battery isn’t very large to begin with. The ZenBook 3 Deluxe’s battery capacity is 46Wh, which is a little small in comparison to other notebooks like the Dell XPS 13 and Lenovo Yoga 900, whose battery capacities are 56Wh and 66Wh respectively. If it is any consolation, the ZenBook 3 Deluxe comes with a quick-charging function that enables it to attain a 60% charge from zero in just 49 minutes. 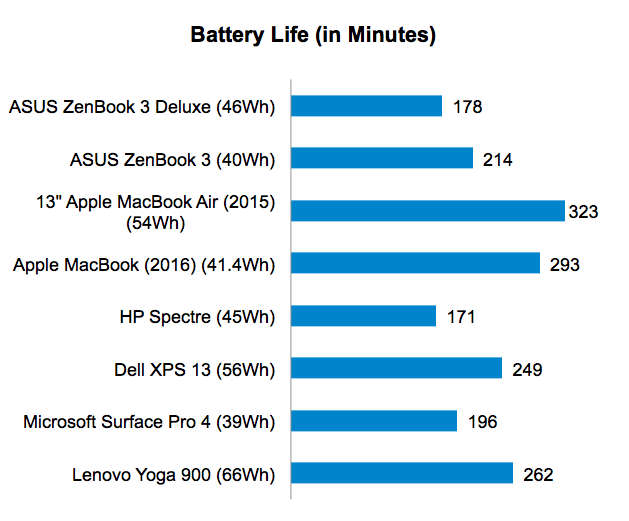 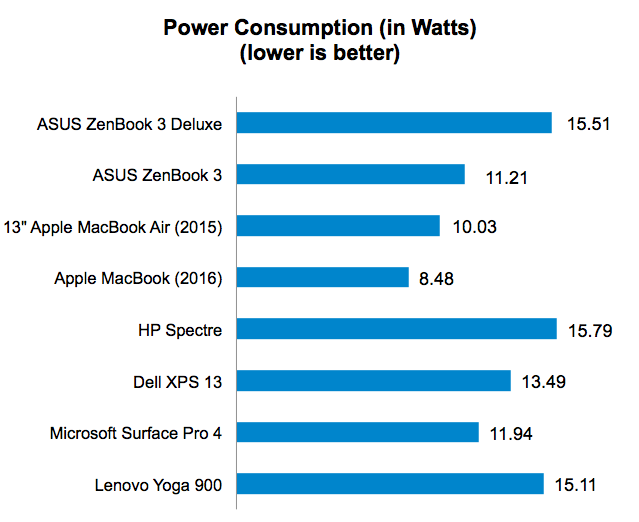 Our Portability Index factors in battery life, weight and volume so you can see which notebook is the most worthwhile to carry around. Surprisingly, the ZenBook 3 Deluxe's score of 3.026 means that it is the least portable Ultrabook if you factor in battery life and overall weight and volume. But if you look at the bigger picture, its score is actually quite comparable to that of other Ultrabooks in its class. What this really means for the ZenBook 3 Deluxe is that its lightweight and compact design has been let down by its poor battery life. A shame indeed. 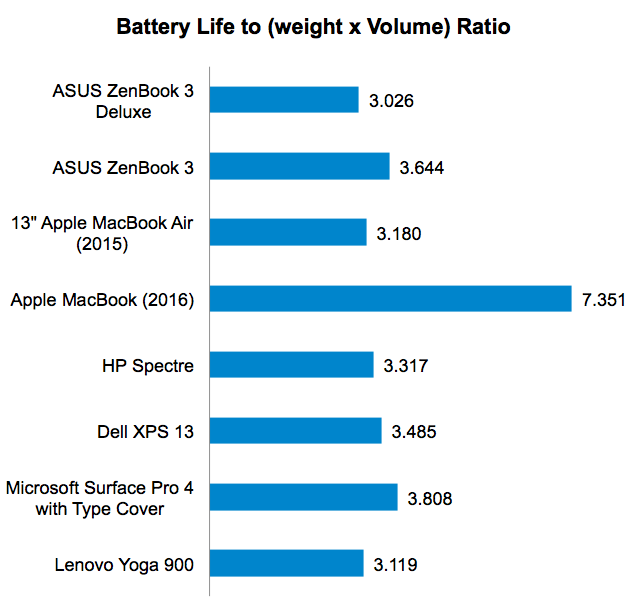