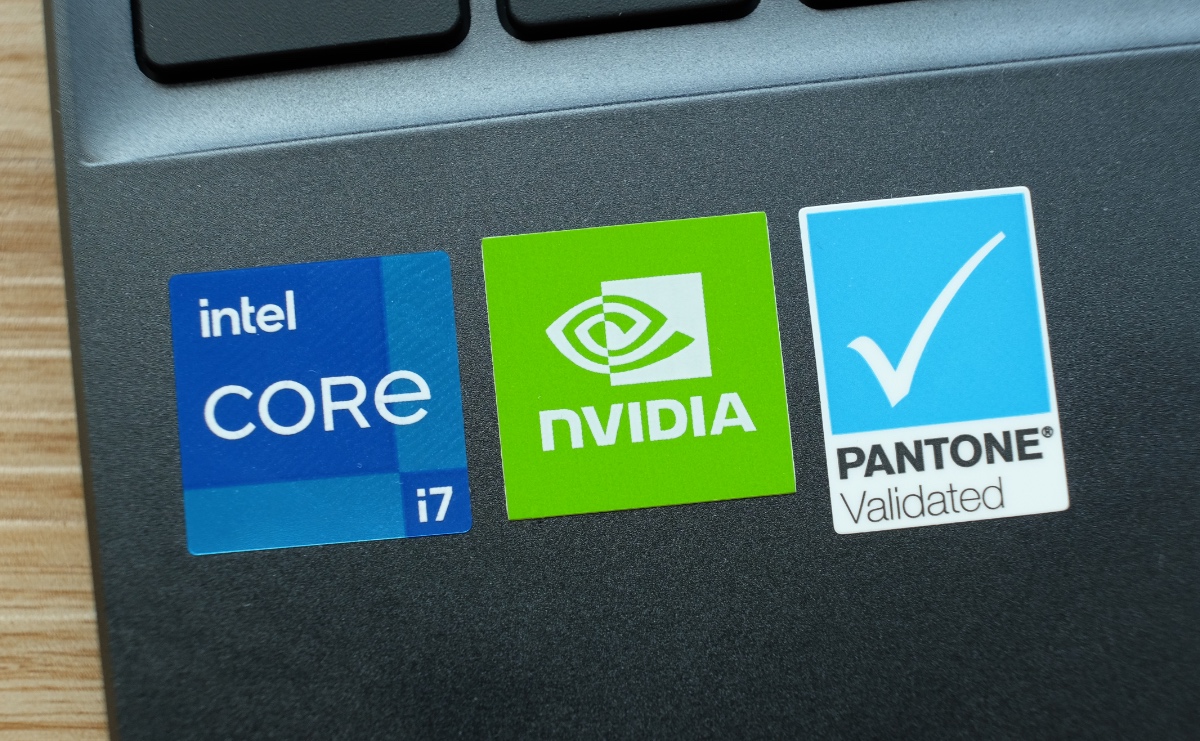 The ASUS ZenBook 14X OLED is powered by the same Core i7 version of Intel's Tiger Lake processor that is found in nearly every other notebook in its class. It also has 16GB of memory and is one of the few notebooks to feature discrete NVIDIA GeForce MX450 graphics. We will be comparing its performance against other comparable ultraportable notebooks like ASUS' own ZenBook 14 Ultralight, the Acer Swift 5, Dell XPS 13, and more.

Performance was generally very good. Perhaps because of its IceCool Plus cooling system, the ZenBook 14X OLED confidently outscored the ZenBook 14 Ultralight, which shares the same specifications. It turned out the best scores on most benchmarks including PCMark 10, Cinebench, WebXPRT 3, and Tomb Raider. However, thermal throttling is an issue as evidenced by how frame rates dropped after a couple of runs on Tomb Raider. If it’s any consolation, this is an issue that plagues most ultraportable notebooks. And even at its lowest, the ZenBook 14X OLED was still managed the highest frame rates. Even at its poorest, it recorded close to 60fps on the more intensive High graphics setting. 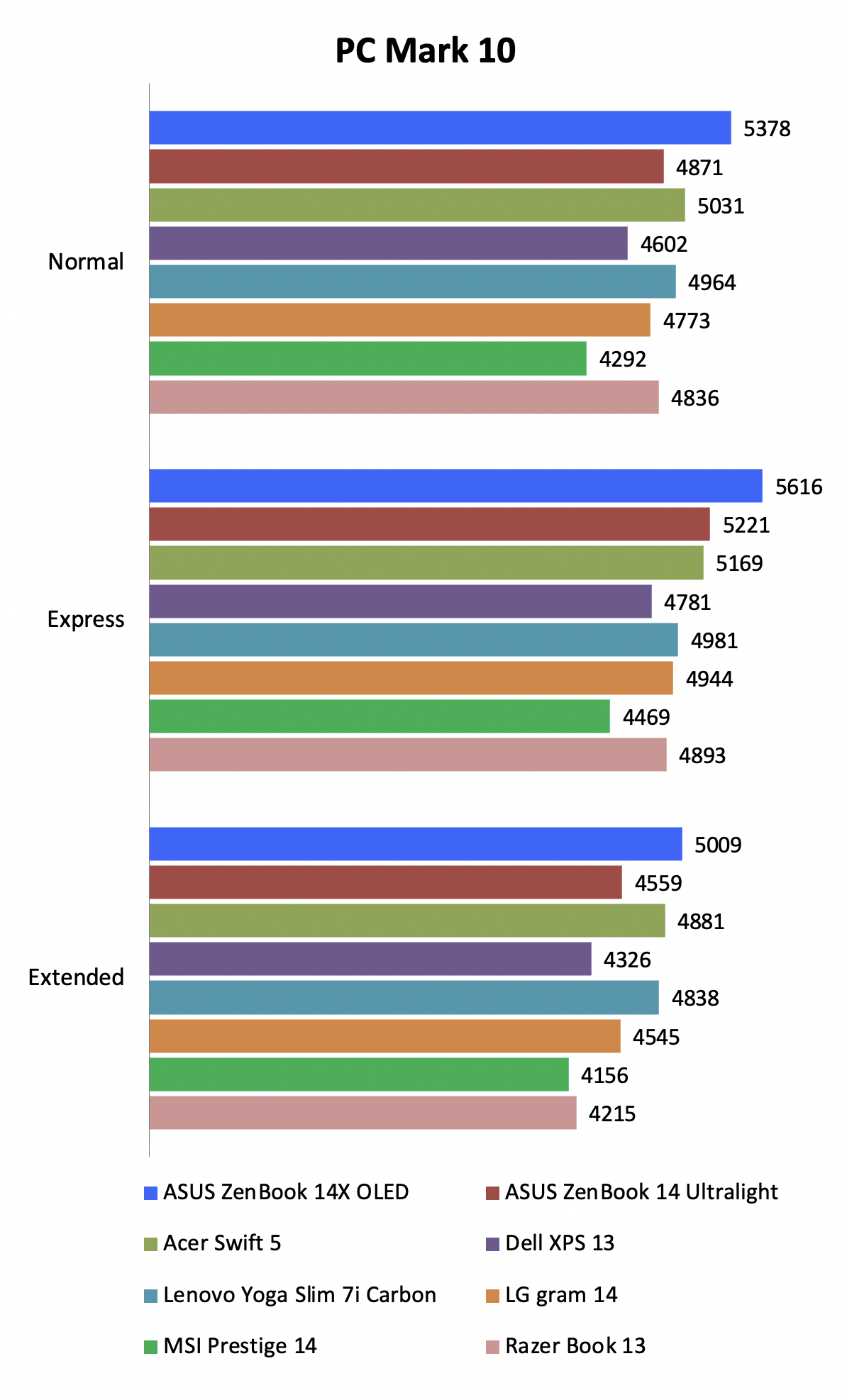 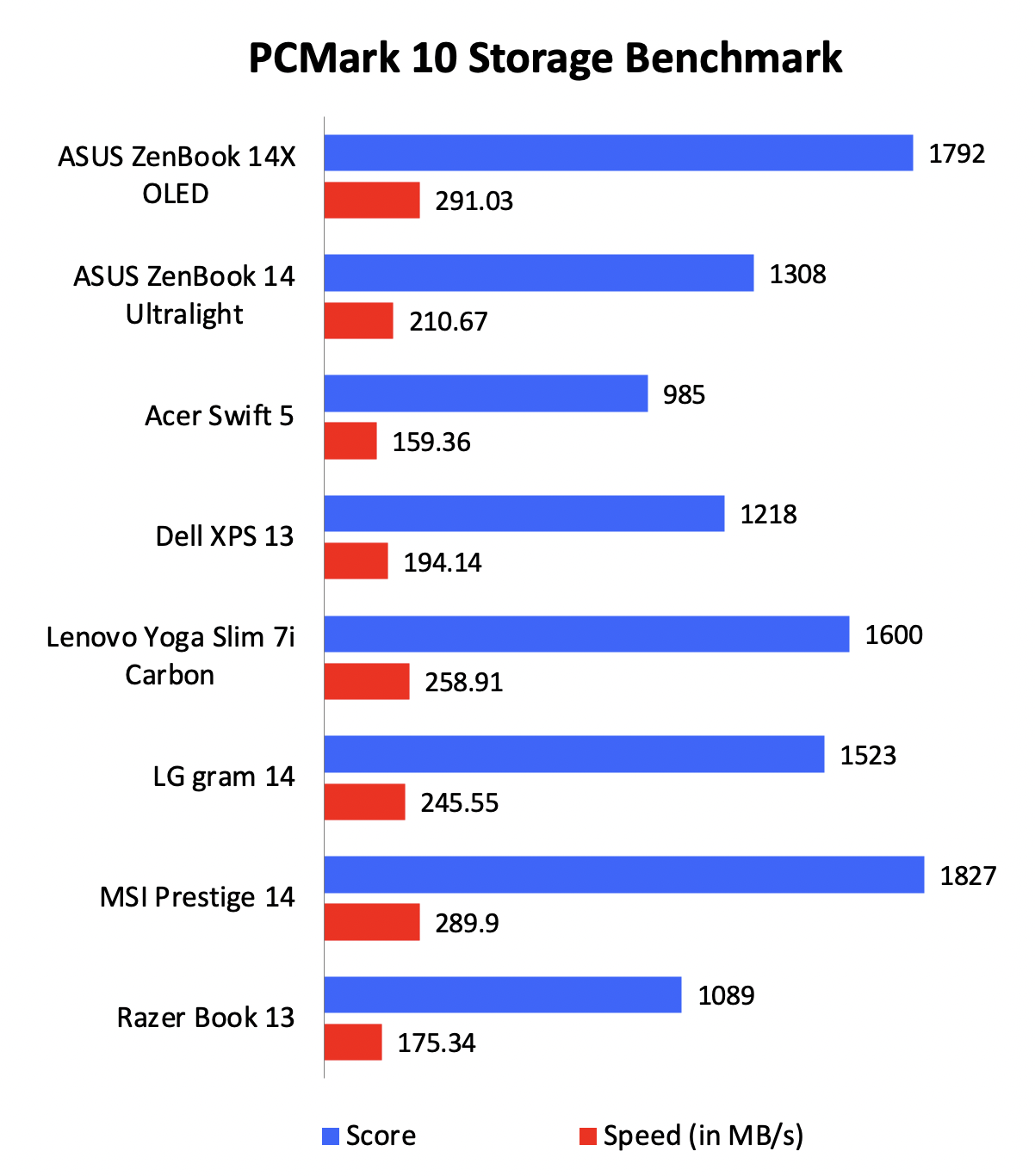 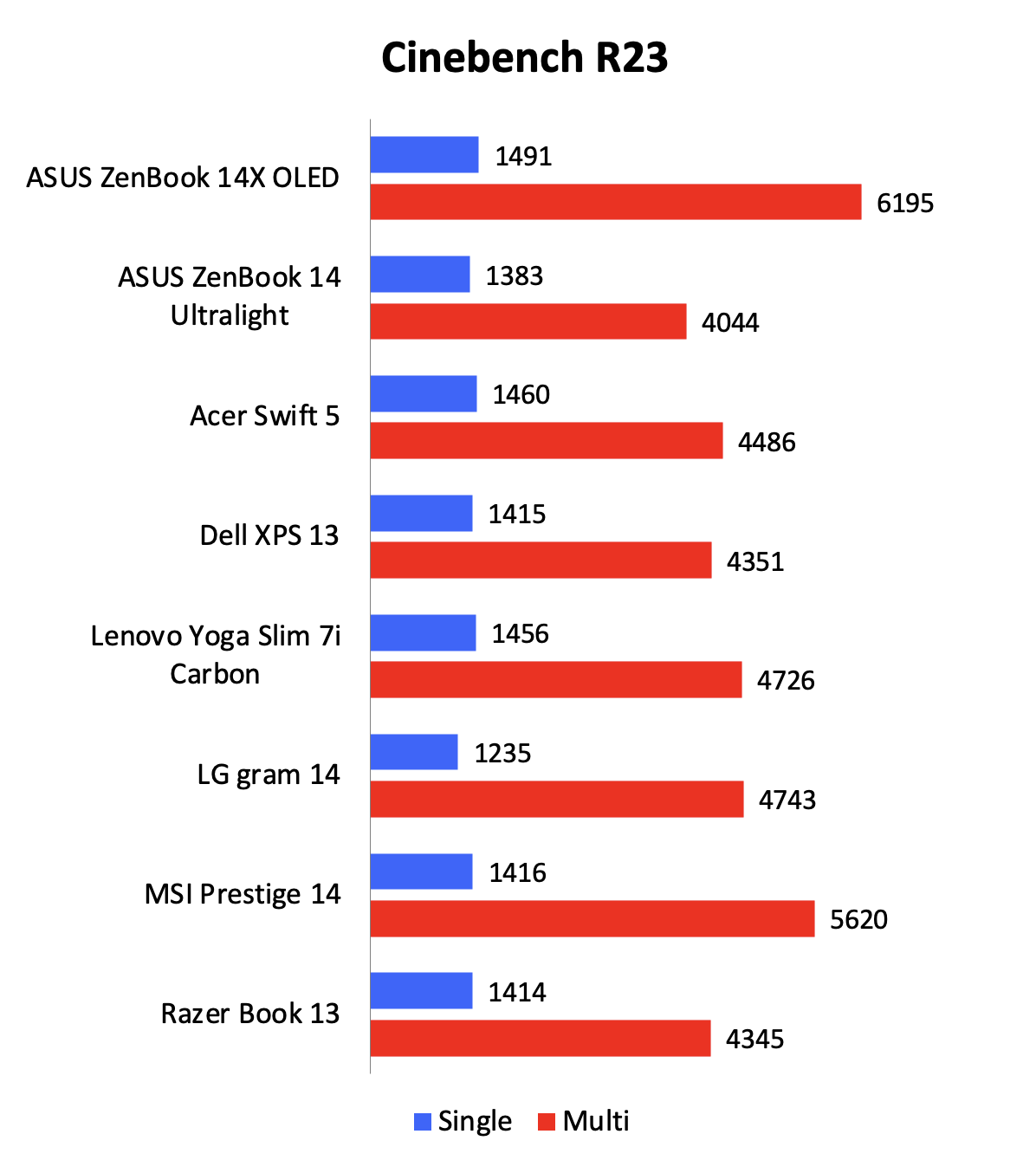 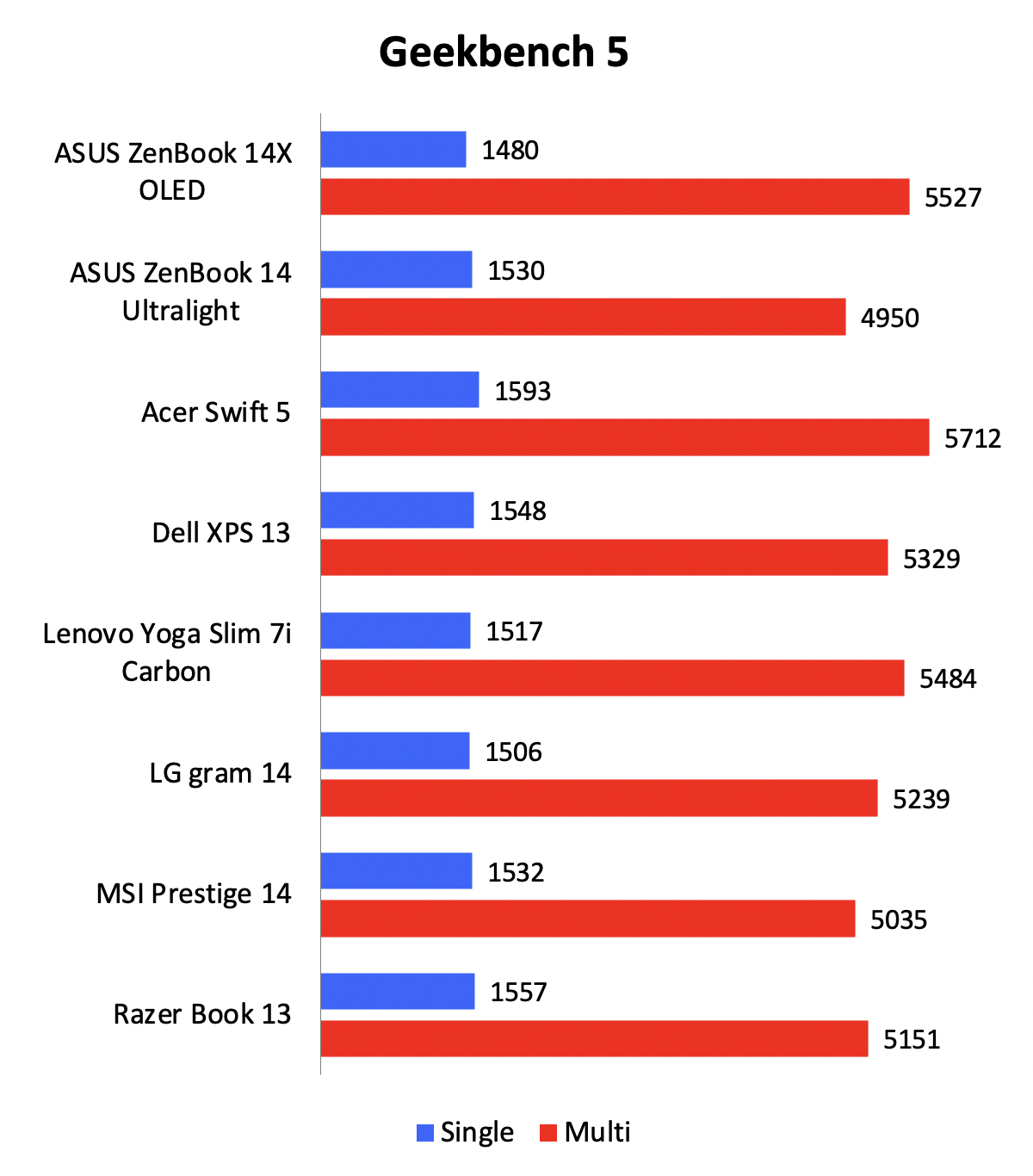 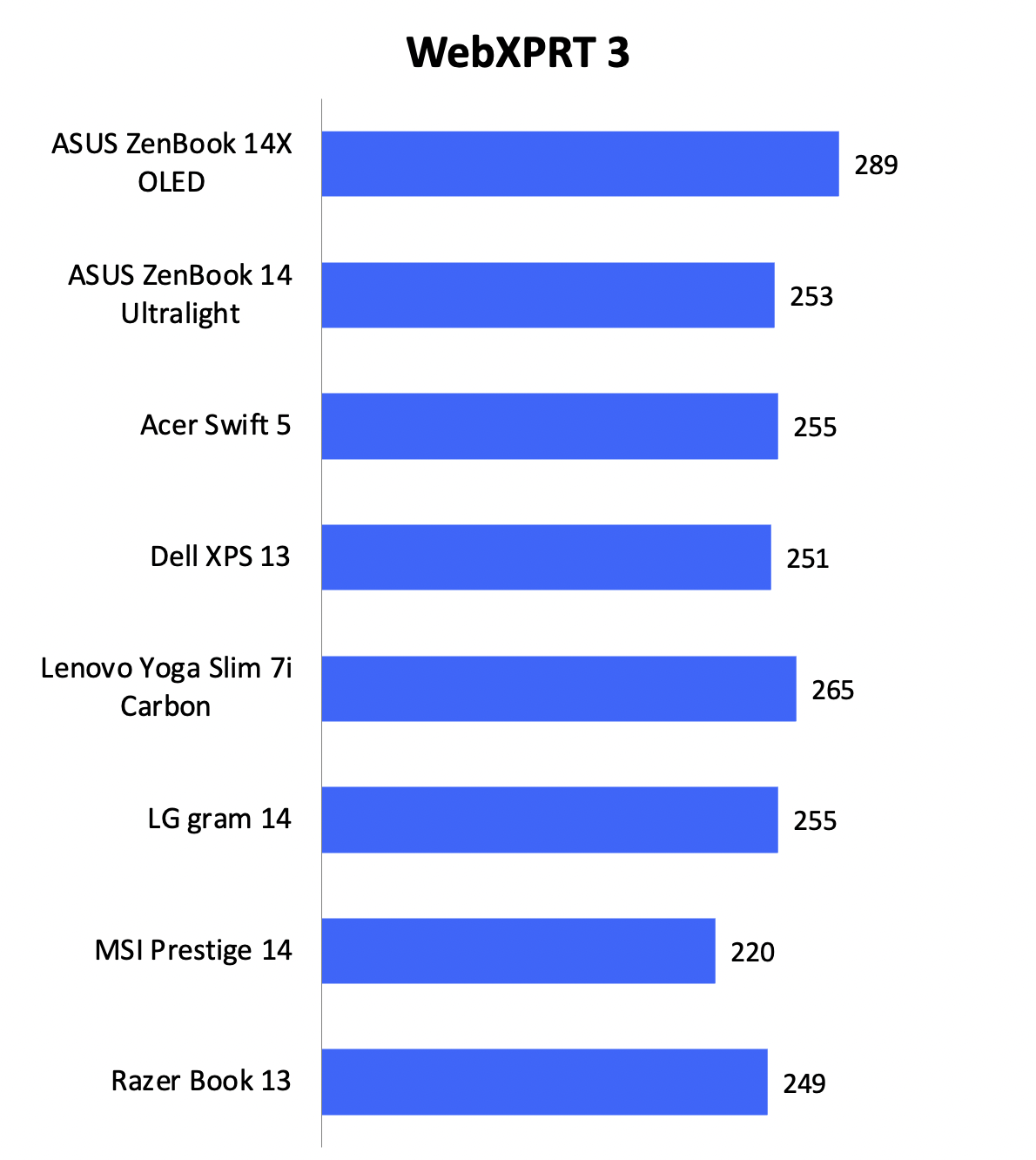 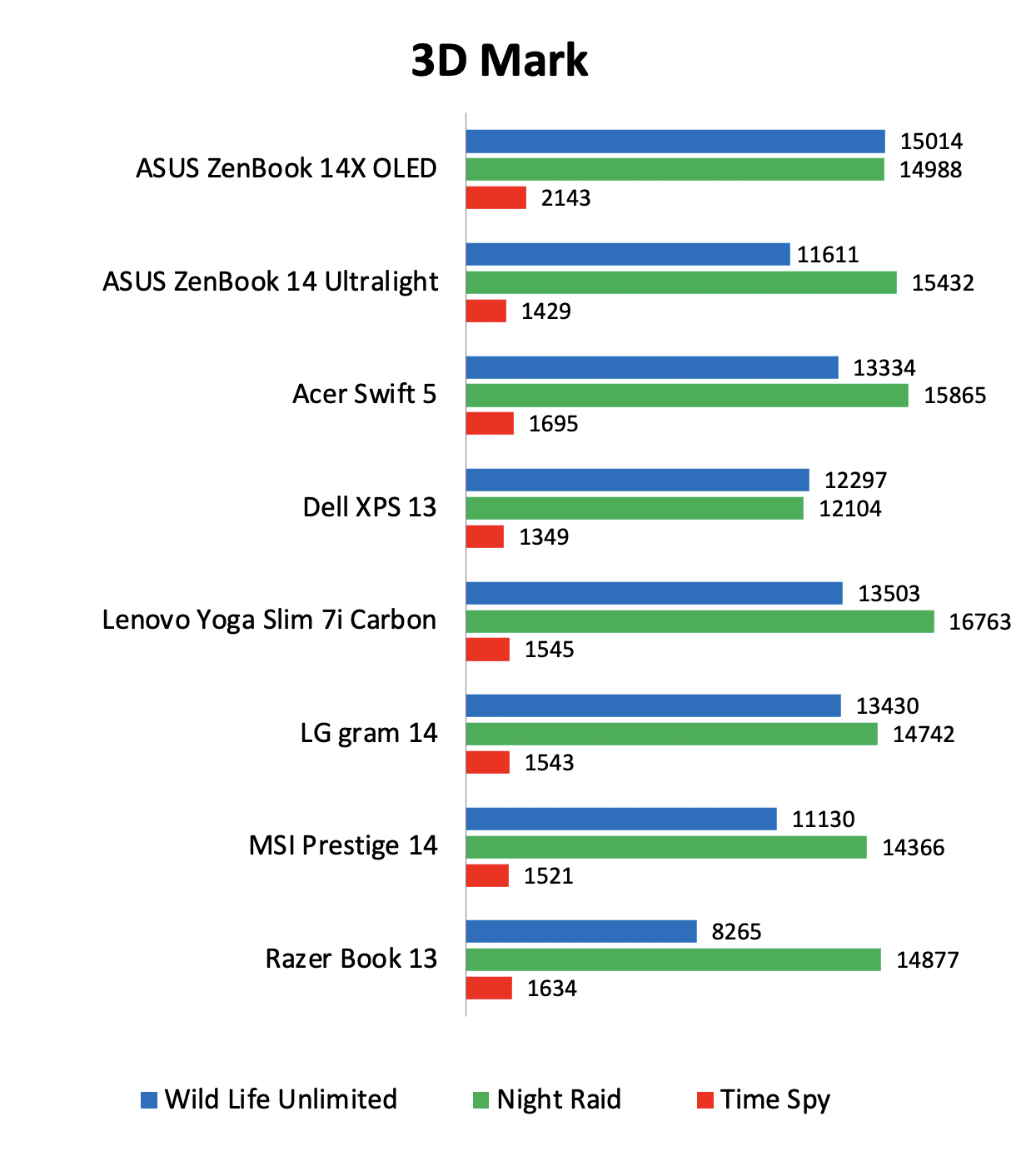 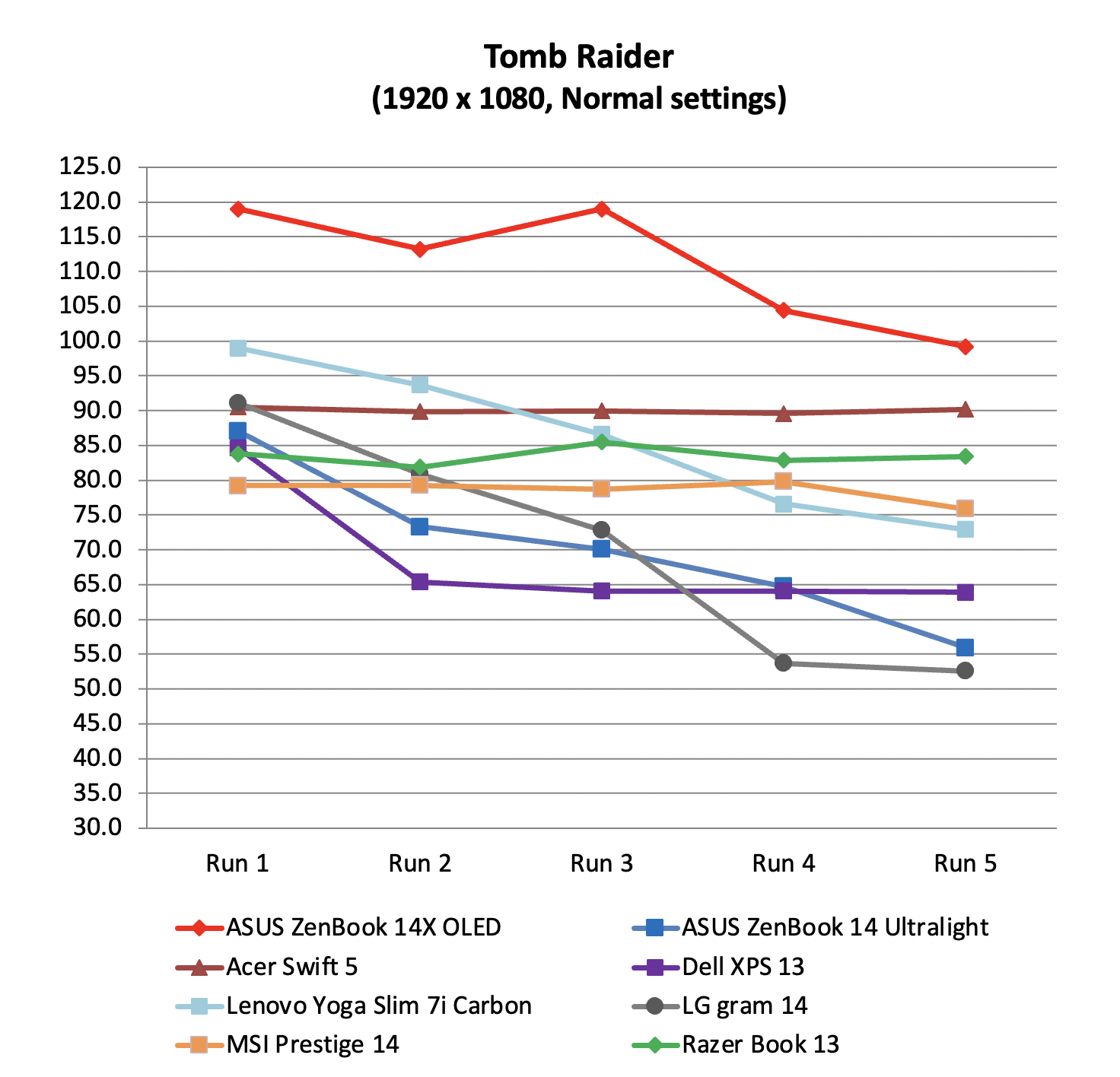 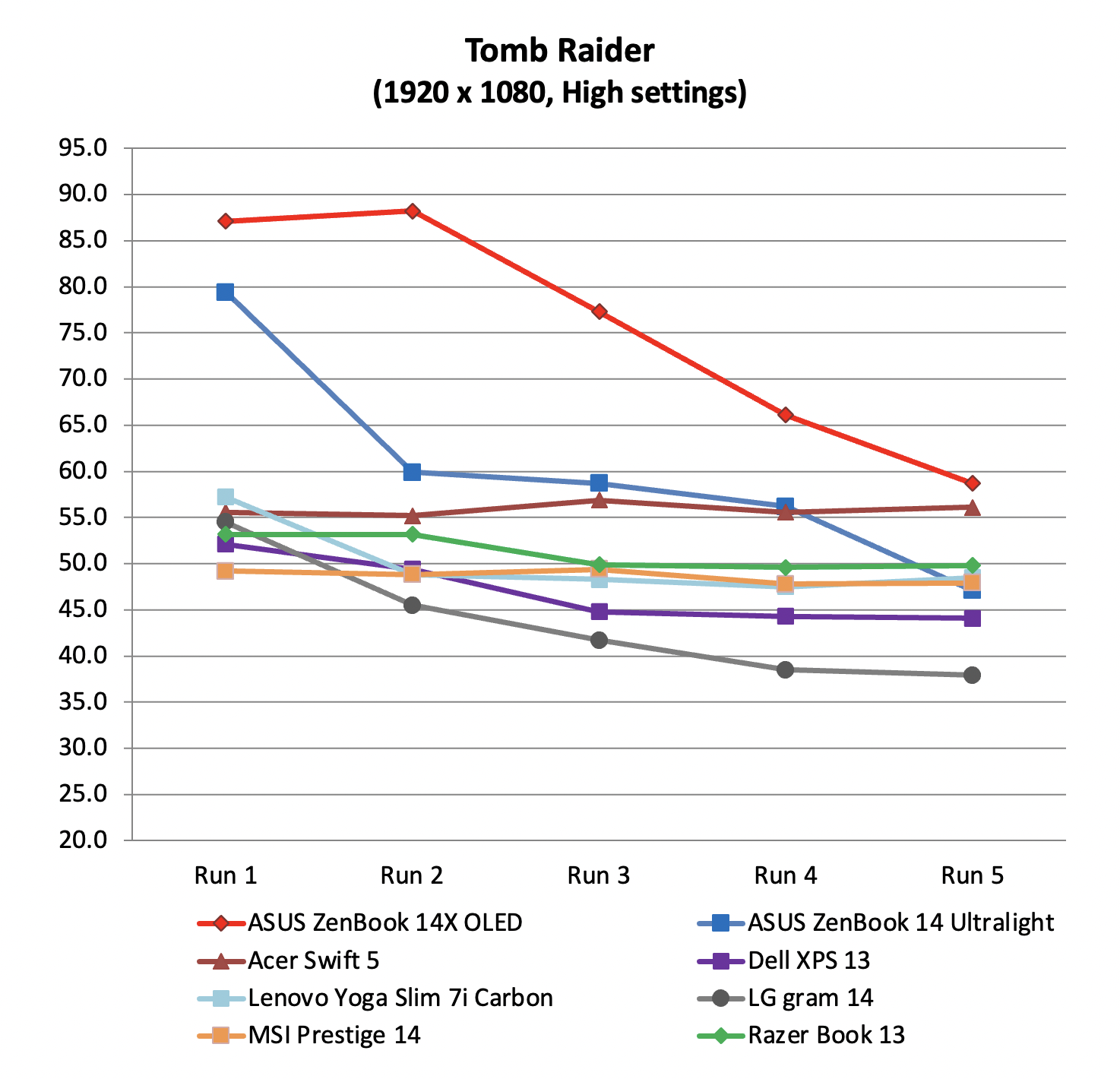 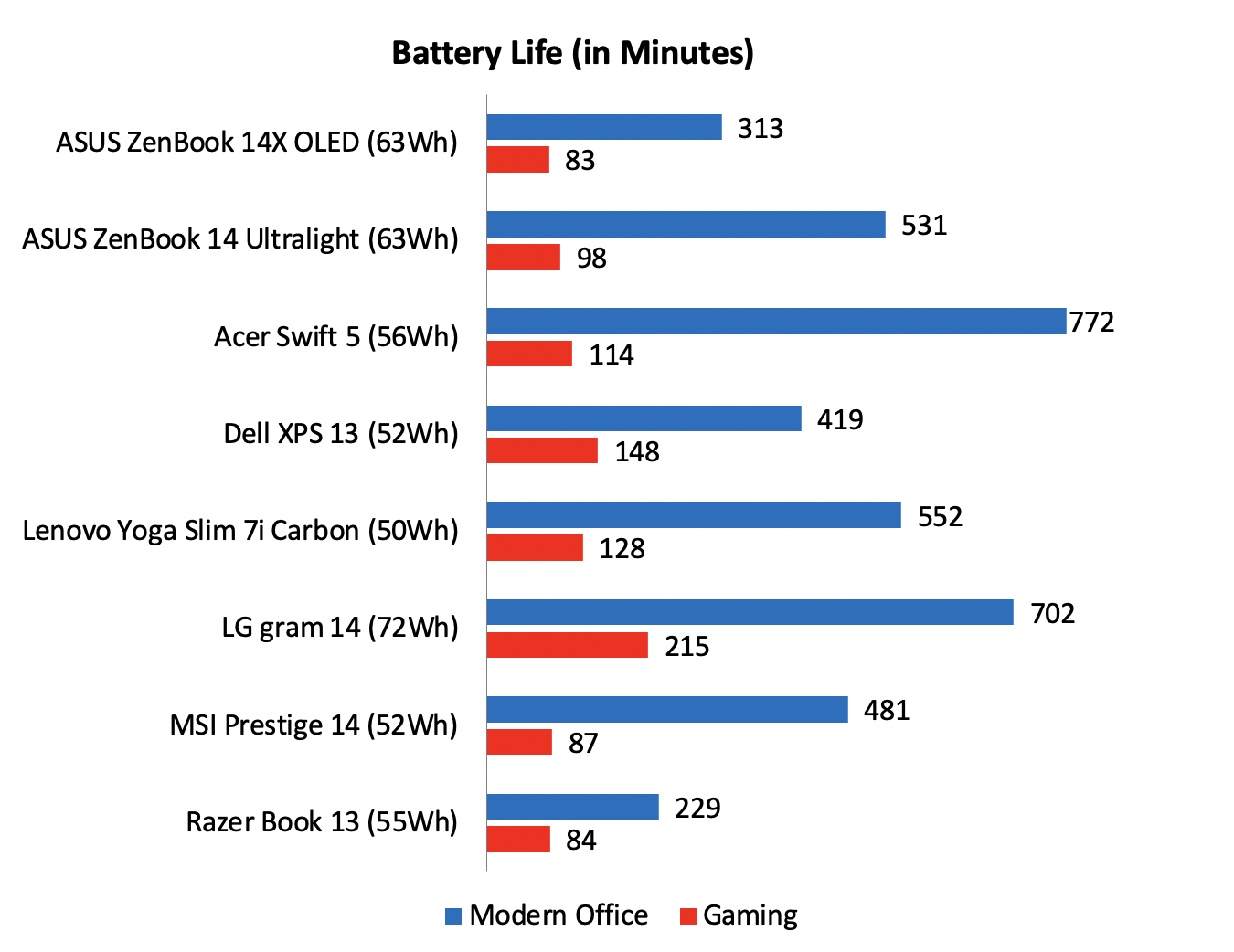 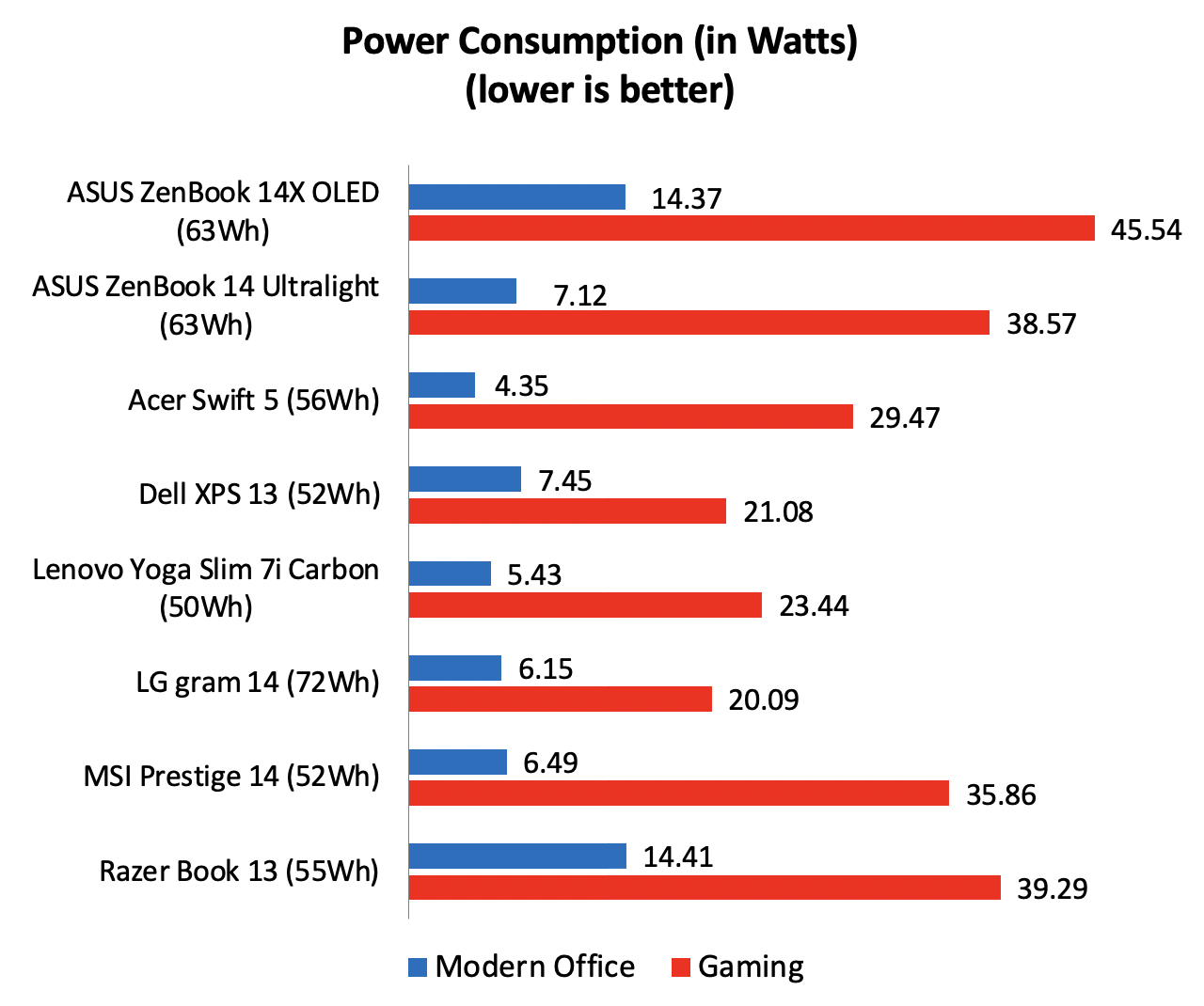 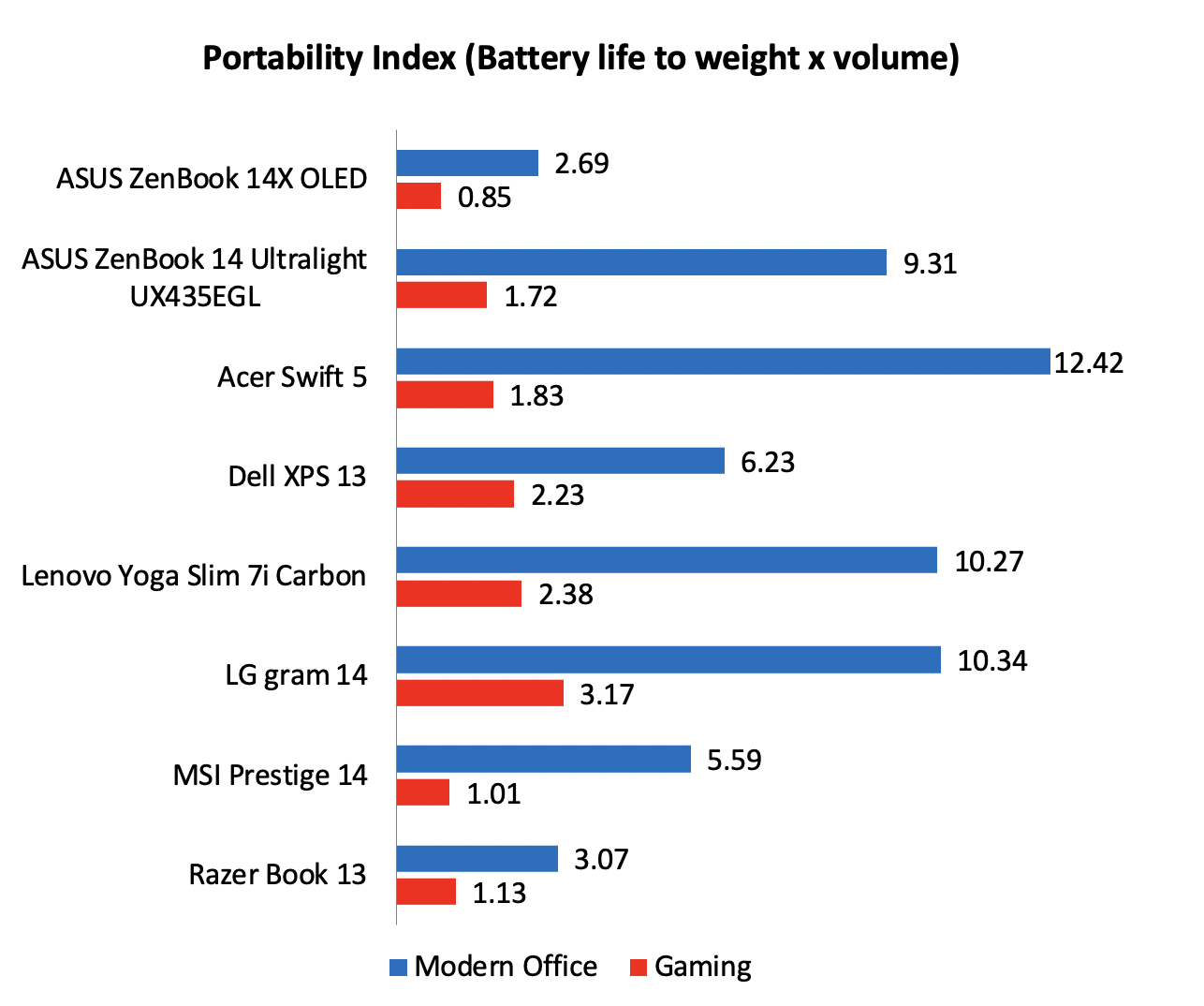 Is this the best ZenBook?

The ZenBook 14X OLED makes a strong case for being the best all-around 14-inch ZenBook that ASUS currently sells. Obviously, that OLED display is a large part of the reason why, but its performance was also very good and it has a good offering of ports. The price is hard to fault too because you’d expect a notebook with an OLED display to cost substantially more but that’s not the case. Compared to a ZenBook 14 Ultralight with similar specifications, the ZenBook 14X OLED is just S$200 more (S$2,398). That’s a premium I think most people will gladly pay once they see how just much better the OLED display is. 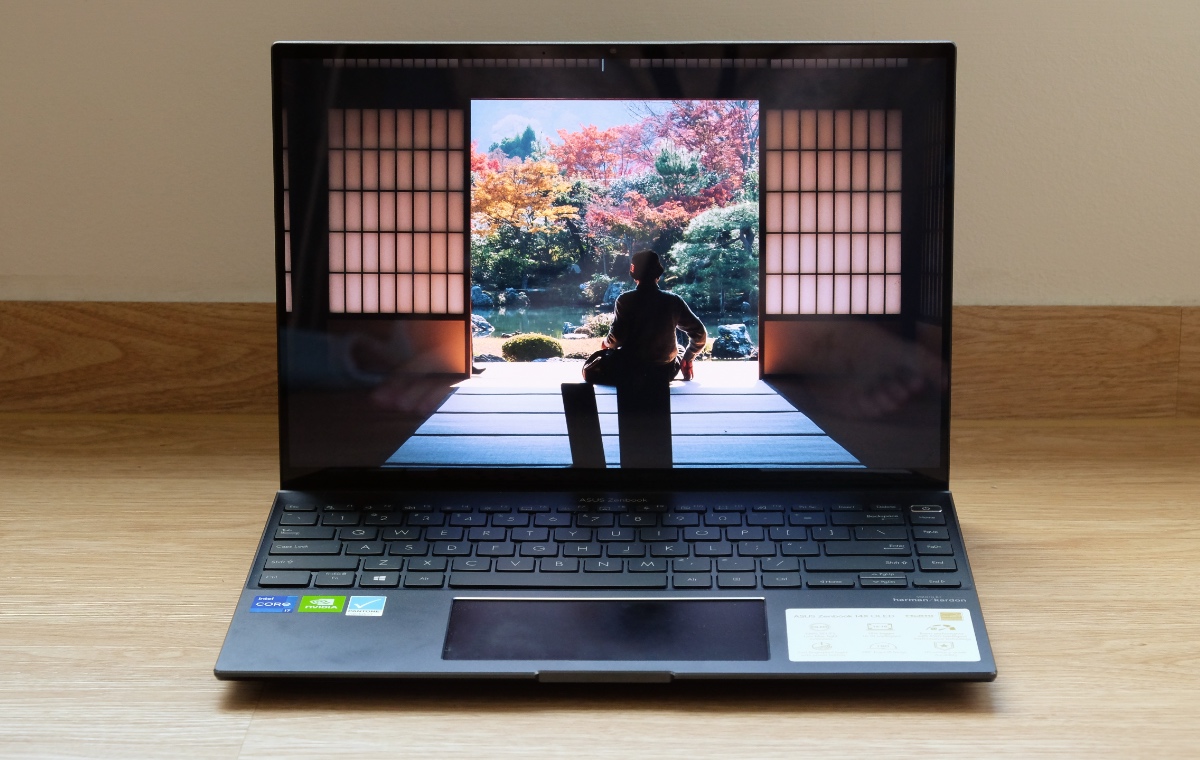 Where the ZenBook 14X OLED disappoints is in its battery life. No matter how you look at it, at just over five hours, it’s one of the poorest showings in its class. Sure, you could probably stretch its battery to six or even seven hours if you dial back the brightness but it doesn’t hide the fact that a ZenBook 14 Ultralight with comparable system specifications lasted nearly 70% longer. Thermal throttling is a concern too, though, to be fair, it’s a problem that plagues all notebooks of this class. However, it’s something to note especially if you intend to run intensive applications like gaming or video-editing for extended periods.

Ultimately, the ZenBook 14X OLED’s well below-average battery life means it’s probably not for everyone. And luckily, our great ultraportable notebook shootout shows that there is no shortage of alternatives But if it were me, I'll opt for the ZenBook 14 Ultralight. It's cheaper now (S$2,198) and while it's display is no where near as nice, it counters with slimmer, lighter dimensions and excellent battery life. For me, these are far more important considerations for an ultraportable notebook. Nevertheless, its excellent display and class-leading performance should find itself no shortage of fans, especially if you don't expect yourself to be moving around or travelling much.