ASUS ZenBook 14 UX434 review: Lots of bang for your buck

To evaluate the performance of the ZenBook 14 UX434, we will be comparing it against the equally new Acer Swift 5, Dell XPS 13 2-in-1, and HP Spectre x360. Here's a quick table summarising their specifications:

The Acer Swift 5 is the ZenBook’s closest rival ― their specifications and price are very similar. The Dell and HP, on the other hand, are much pricier notebooks with convertible form factors and they are powered by Ice Lake Intel processors with Intel’s new Iris Plus integrated graphics. It will be interesting to see how the GeForce MX250 discrete GPU in the ZenBook compares against Intel’s newest integrated graphics solution.

The ZenBook 14 UX434’s performance was generally good. Its scores on PCMark 10 were amongst the highest, showing that it’s good for general productivity apps. It’s a capable web browser too as it recorded the highest scores on WebXPRT. Its scores on 3DMark were good too but it’s interesting to see that even the Dell and HP were competitive in that benchmark. It used to be that Intel’s integrated GPUs were no match even for entry-level discrete GPUs.

However, on Tomb Raider, the discrete GPUs showed their worth. The ASUS and Acer were at least 50% faster than the Dell and HP. Another important thing to note is that the ASUS held these frame rates consistently and showed no signs of performance throttling. The Dell and HP, however, showed significant signs of throttling on Tomb Raider. The Dell, for example, peaked at 57.9fps on Normal settings but settled to just 40.6fps after just a few consecutive runs. 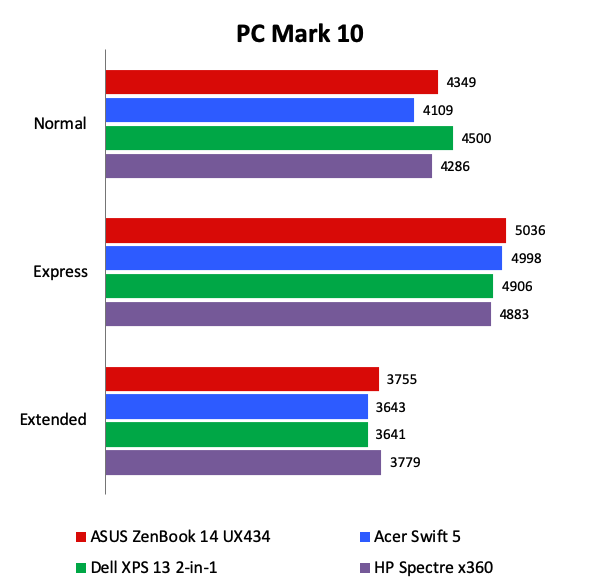 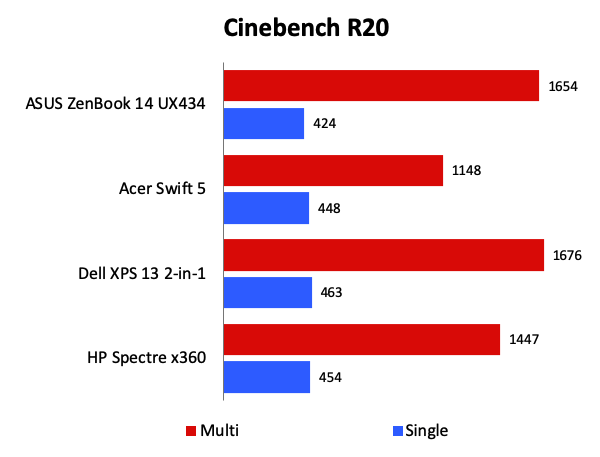 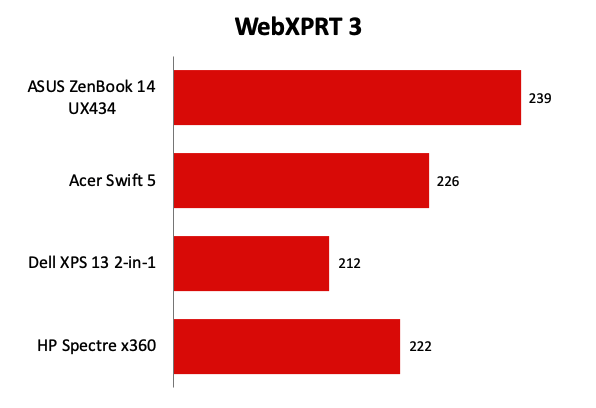 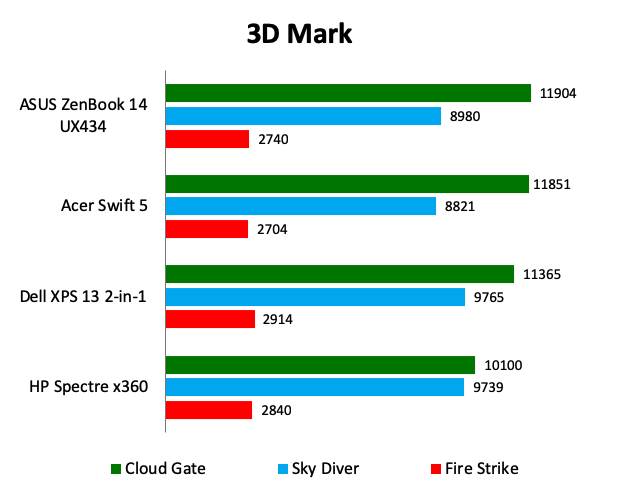 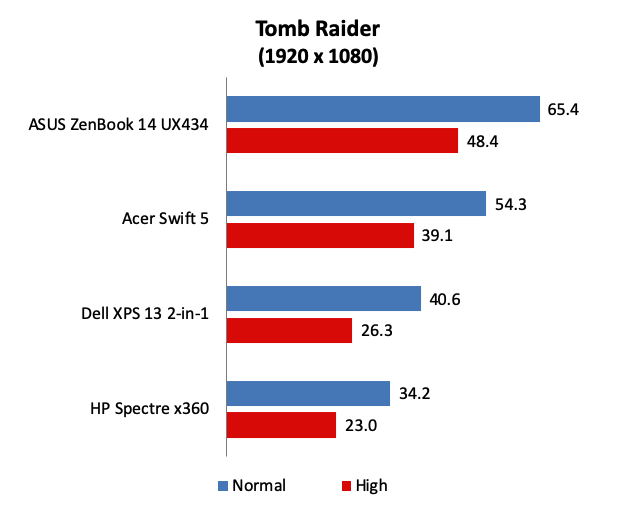 Battery life is not the ZenBook 14 UX434's strongest suit. The combination of the less efficient Comet Lake processor and discrete GPU means the ZenBook's power consumption is considerably higher than its rivals, particularly the Dell and HP. Still, when running normal day-to-day applications, the ZenBook lasted 285 minutes or 4 hours and 45 minutes. This isn't too bad if you consider that its display was set to 100% and it has the smallest battery capacity.

As for its portability score, it was no surprise to see that it scored the lowest given that its battery life was already on the low side and that it's easily the chunkiest and heaviest notebook among the four. That doesn't mean the ZenBook 14 UX434 is a porkchop. It's still a highly portable machine — it's just not as portable as its rivals are. 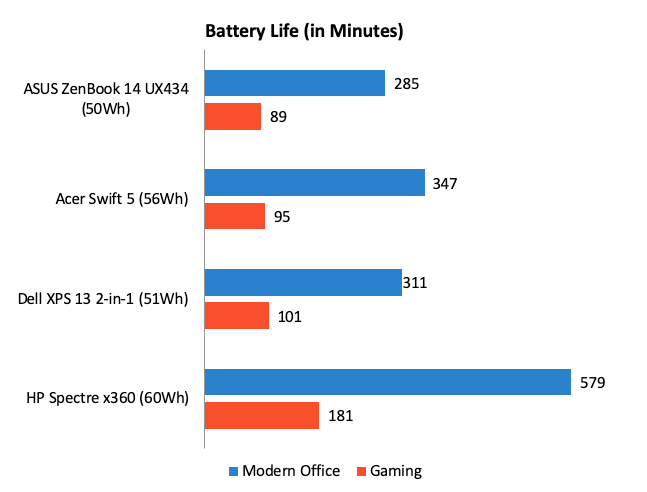 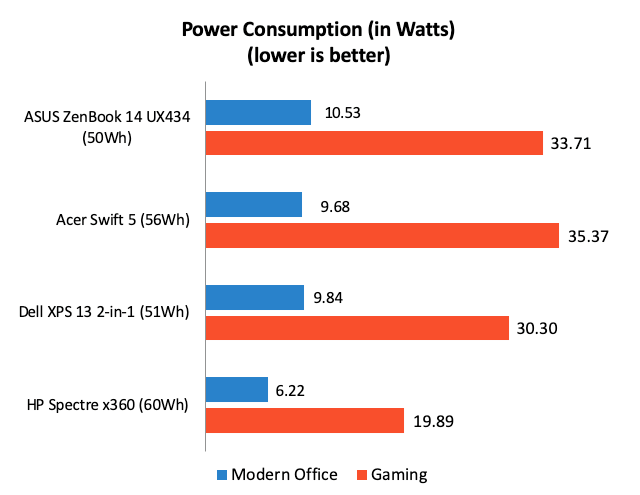 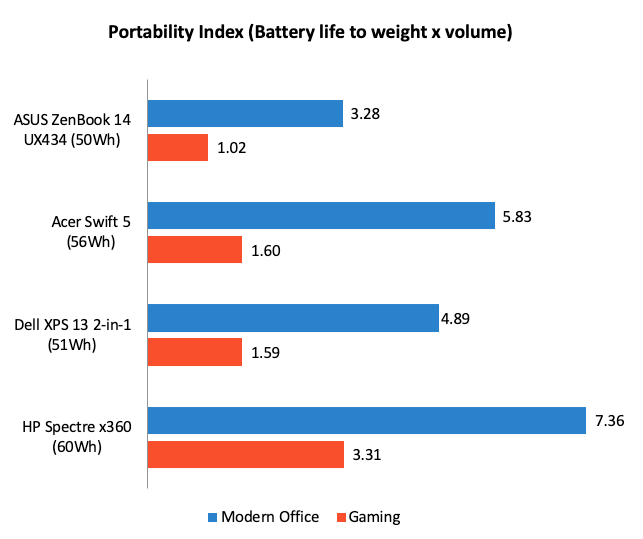 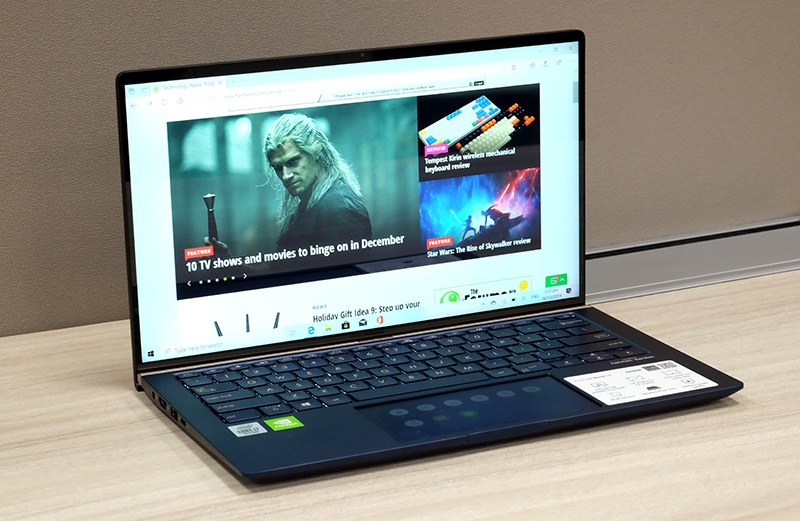 Crucially, it gets a lot of the fundamentals right. The display is good, the keyboard and trackpad are sensible and pleasant to use, it’s compact and not too heavy, and its performance is exemplary. It offers a good selection of ports but it’s a real pity that it’s USB-C port does not support charging nor Thunderbolt 3.

Also, the effectiveness of the ScreenPad 2.0 trackpad is debatable. I found it to be small to be really useful as a secondary display and even the apps that are optimised for it aren’t all that helpful. I would rather the feature be omitted so that the price can be brought down even further.

Speaking of price, that’s perhaps the ZenBook 14 UX434 biggest attraction. The sticker price is S$2,098, which is incredible considering what’s on offer. Even if you disregard its features, the basic specifications are mighty tempting ― Core i7 processor, 16GB of memory, 1TB SSD, and discrete NVIDIA graphics. Acer’s Swift 5 comes close but it still costs nearly S$300 more. 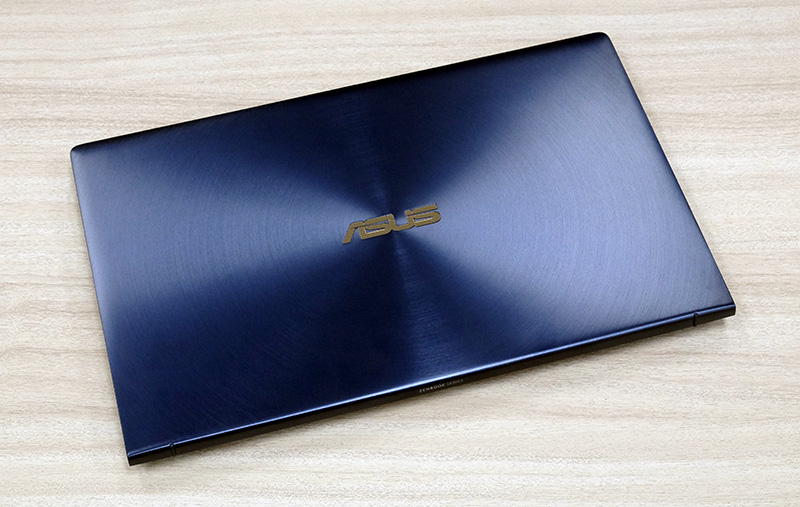 If you want an ultraportable notebook of this size, you’d be hard-pressed to find another that offers anywhere as much value as the ZenBook 14 UX434. In short, for most people looking to get a thin 13 to 14-inch notebook, this is the family of notebooks to start your search.