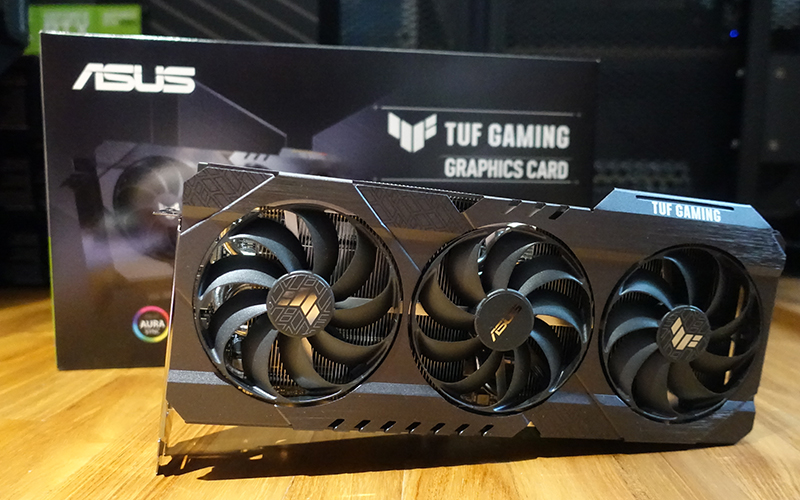 NVIDIA's GeForce RTX 3080 may just be one of the most sought-after graphics cards in recent memory, bringing with it a huge generational leap that propels it past even the GeForce RTX 2080 Ti. The ASUS TUF Gaming GeForce RTX 3080 joins the ranks of third-party cards populating the market, adding improved cooling and RGB lighting to what is already a beast of a card.

This is the first time that ASUS has brought its TUF Gaming series to an NVIDIA flagship, and it features the same focus on durability that the TUF Gaming range has come to be known for. This means that components have supposedly been selected for durability and performance and subject to a 144-hour validation trial. For those who are interested, it also uses only MLCC capacitors, which were initially thought to be a better solution than POSCAPs and the fix for avoiding crashing on the GeForce RTX 3080.

The TUF Gaming card features an all-aluminum shroud for a more robust build and a blissfully minimalist look with few ostentatious design elements. There are some brushed metal accents along the sides and graphic prints for some additional flair, but this is overall a rather muted design. 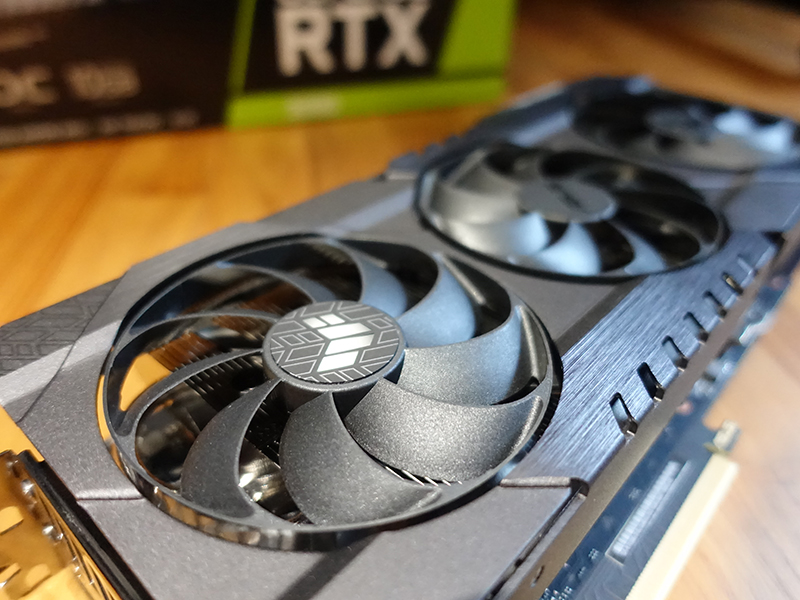 There is no plastic on the card, apart from the fans, and it feels really solid and premium. The aluminum fan shroud houses three 90mm axial-tech fans, each utilising dual ball bearings for greater longevity compared to regular sleeve bearing fans. However, the middle fan spins in the opposite direction from the other too, similar to what Gigabyte already does on its cards, in order to reduce turbulence. In addition, the fans support semi-passive operation and stop spinning entirely when the GPU temperature falls below 55°C to better keep noise to a minimum. 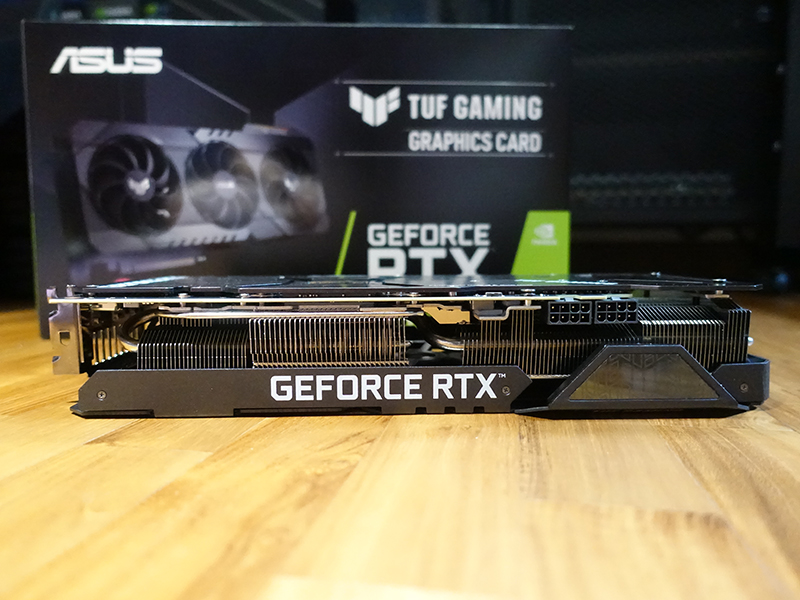 The card is cooled by a large, beefy-looking heatsink, featuring sprawling fin arrays that connect to a nickel-plated copper base plate via six 6mm nickel-plated copper heat pipes. The base plate makes direct contact with the GPU, and the GDDR6X memory chips are directly cooled by a second dedicated, smaller heatsink mounted on the PCB itself. The VRM components haven't been neglected either, and they make contact with the primary heatsink through aluminum plates. The copper base plate uses what ASUS calls its MaxContact design, and the company says it has worked to improve the surface smoothness of the heat spreader at a microscopic level in order to allow for better contact and more efficient heat transfer.

A thick backplate covers the rear of the PCB, where there are sizeable cutouts for airflow and also thermal pads to help whisk heat away from the components on the flip side. 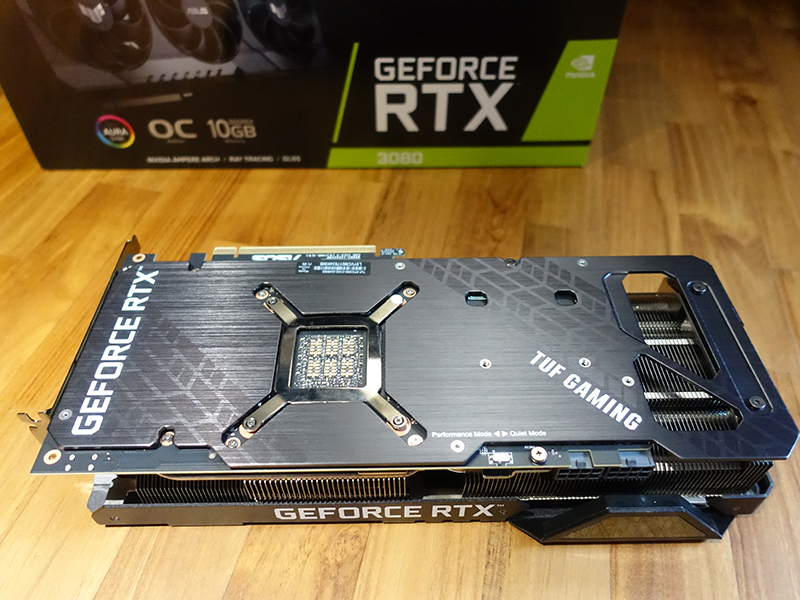 Overall, this is one large and heavy card, and the 2.7-slot design will require 3 full expansion card slots to accommodate. Instead of NVIDIA's new 12-pin power connector, it also uses more conventional dual 8-pin PCIe power connectors (good news for those who don't want additional cabling to deal with), and onboard LEDs that notify if the graphics power connectors are plugged in securely.

There is also a dual BIOS switch on the PCB as well to let you switch between performance and quiet modes. This just changes the fan profile and doesn't do anything for clock speeds, so it mostly comes down to how averse you are to noise. 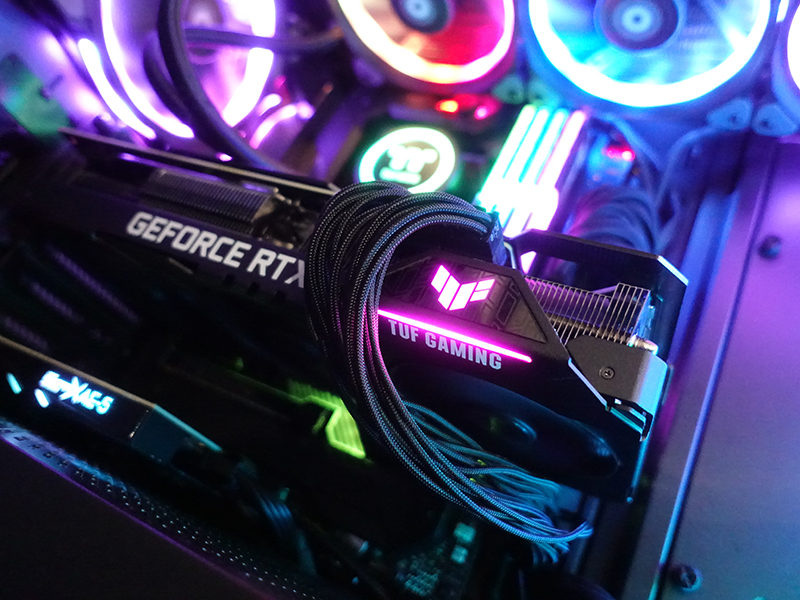 The TUF Gaming card ships in Gaming Mode by default, with a base clock of 1,440MHz and boost clock of 1,710MHz, the same as the Founders Edition card. In OC Mode, this goes up to 1,740MHz for the boost clock, but you'll need to download ASUS' software (GPU Tweak II) to enable it. 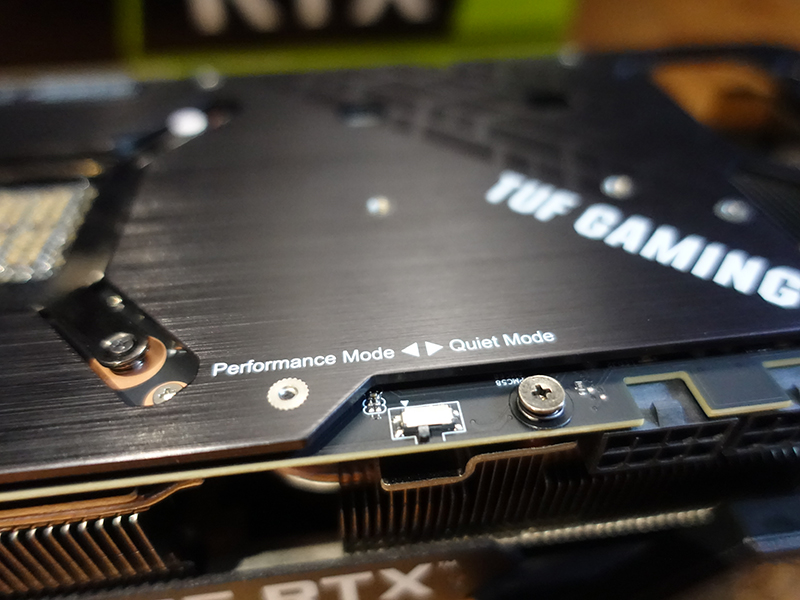 The display outputs are slightly changed from the Founders Edition model. ASUS has added a second HDMI 2.1 port, so you get two HDMI 2.1 and three DisplayPort 1.4a connectors in total. Of course you can't actually use them all, but the extra HDMI port accords you more flexibility in what set of outputs you can connect simultaneously.