ASUS TUF Dash F15 Review: An all well-rounded notebook for both gaming and work

To compare the ASUS TUF Dash F15 at hand, I have opted to refer these 15-inch notebooks :

From a specification’s perspective, the comparison is lopsided as the competing notebooks used all in an assortment of specifications. But the TUF F15 is also our first gaming notebook built with Intel's 11th Gen Core i7 processor alongside NVIDIA's latest mobile GPU, and it would be interesting to see not just how it performs, but where it stands against these models.

These are the games and benchmarks used: 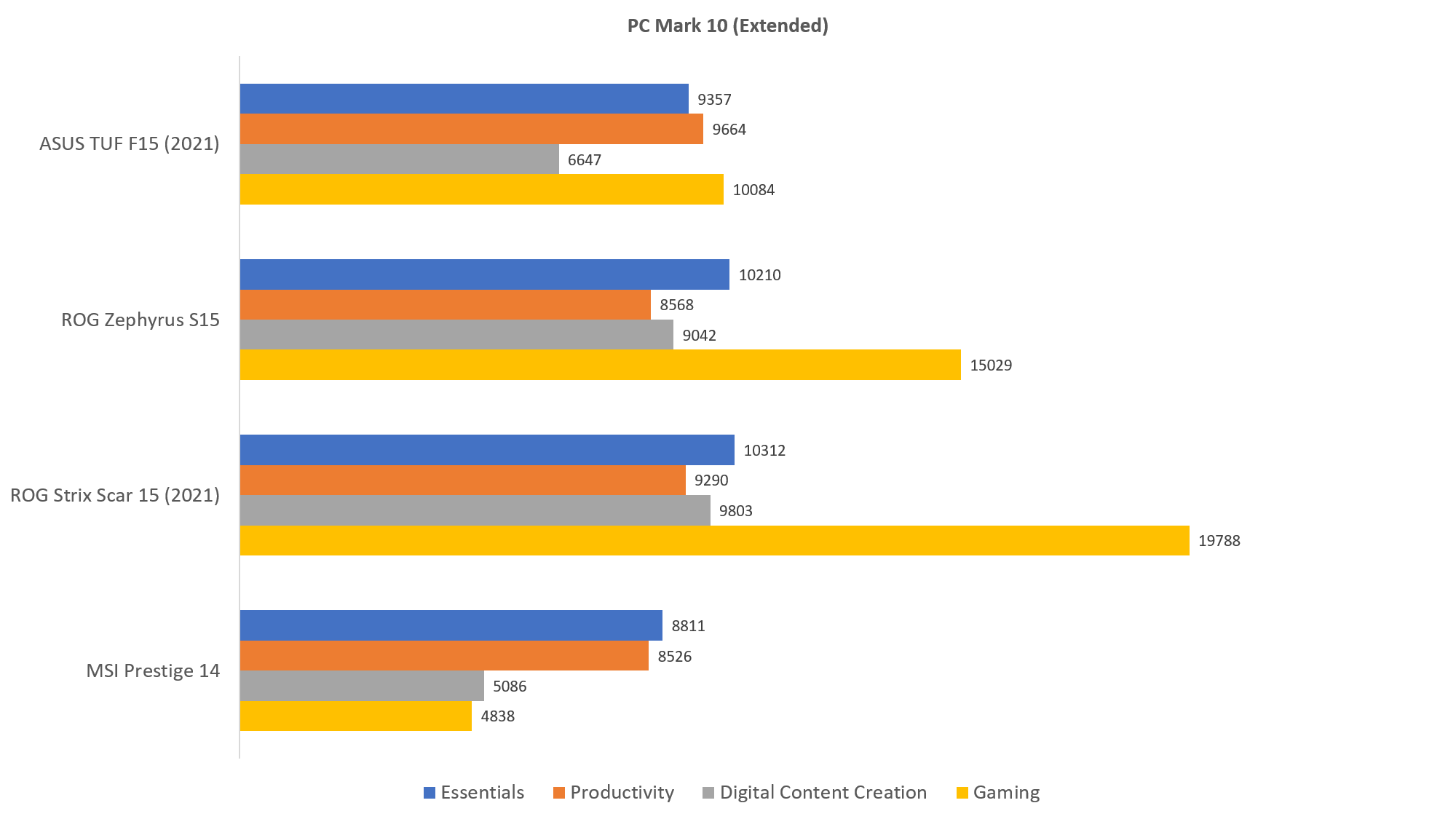 That the ASUS TUF F15 can't quite matched up to the ROG gaming notebooks in the Gaming and Digital Content Creation categories is to be expected. After all, both the Zephyrus S15 and Strix Scar 15 are powered by superior GPUs. But if we look at the Productivity category, then it's quite evident that the TUF F15 performed better when it comes to "everyday office applications" stimulated tests. It's not even that far off in the Essentials test, which like Productivity, emphasised more on CPU performance - more on this below. 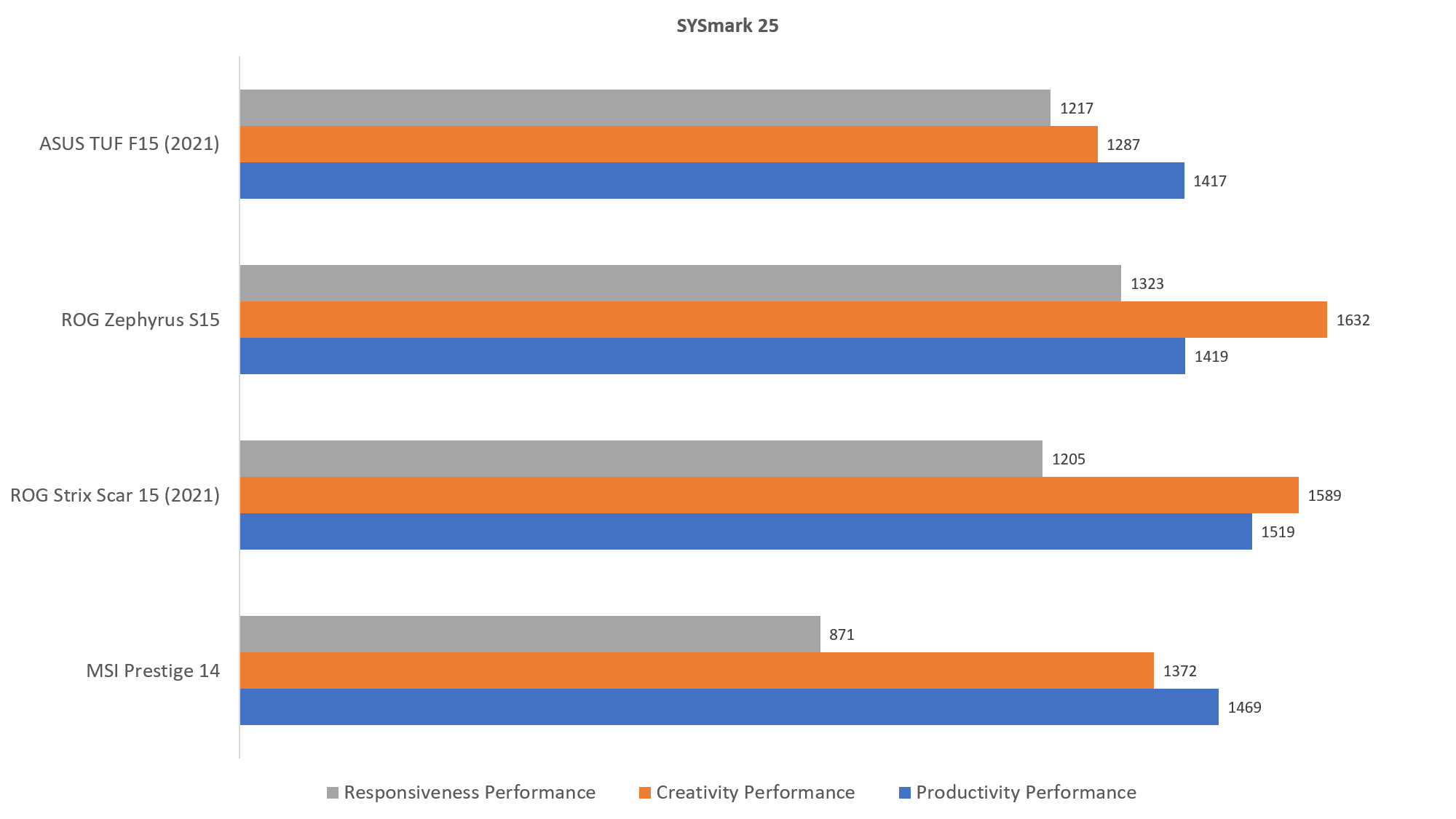 Unlike PCMark 10, which is a synthetic benchmark tool and the results are great as a reference point of a computer’s performance, SYSMark 25 is an application-based benchmark that reflects “real world” usage patterns of business users in the areas of Productivity, Creativity and Responsiveness. This means using popular Microsoft and even Adobe applications rather than less obscure options used in PCMark 10.

Creative Performance takes into account the notebook's GPU prowess so, like what we have seen earlier in PC Mark, the ASUS TUF F15 is not going to give you zippy performance when doing content creation-related tasks. That's not to say it isn't capable, but if you're a serious video editor then it makes more practical sense to go for a notebook with a better graphics card. What I would have been interested to find out is if ASUS had bumped up the TUF F15's memory to 32GB, could it have performed even better in the Productivity Performance (where single-core speed plays biggest factor) test? It seems highly plausible. We are already seeing here that Intel's claims that its new 11th Gen H-series processors offer the fastest single-threaded performance of any mobile chip has some credibility to it.

The RTX 3050 Ti powering the notebook is also NVIDIA’s entry-level mobile GPU, and its performance is comparable to the old RTX 2060 and therefore most suited for 1080p gaming with medium to high detail settings, as seen in our 3D Mark and suite of games benchmark results. The RTX 3050 Ti is not sufficiently powerful enough to enable ray-tracing though, but the available Tensor cores can be used for DLSS support in some games (and get a performance boost) 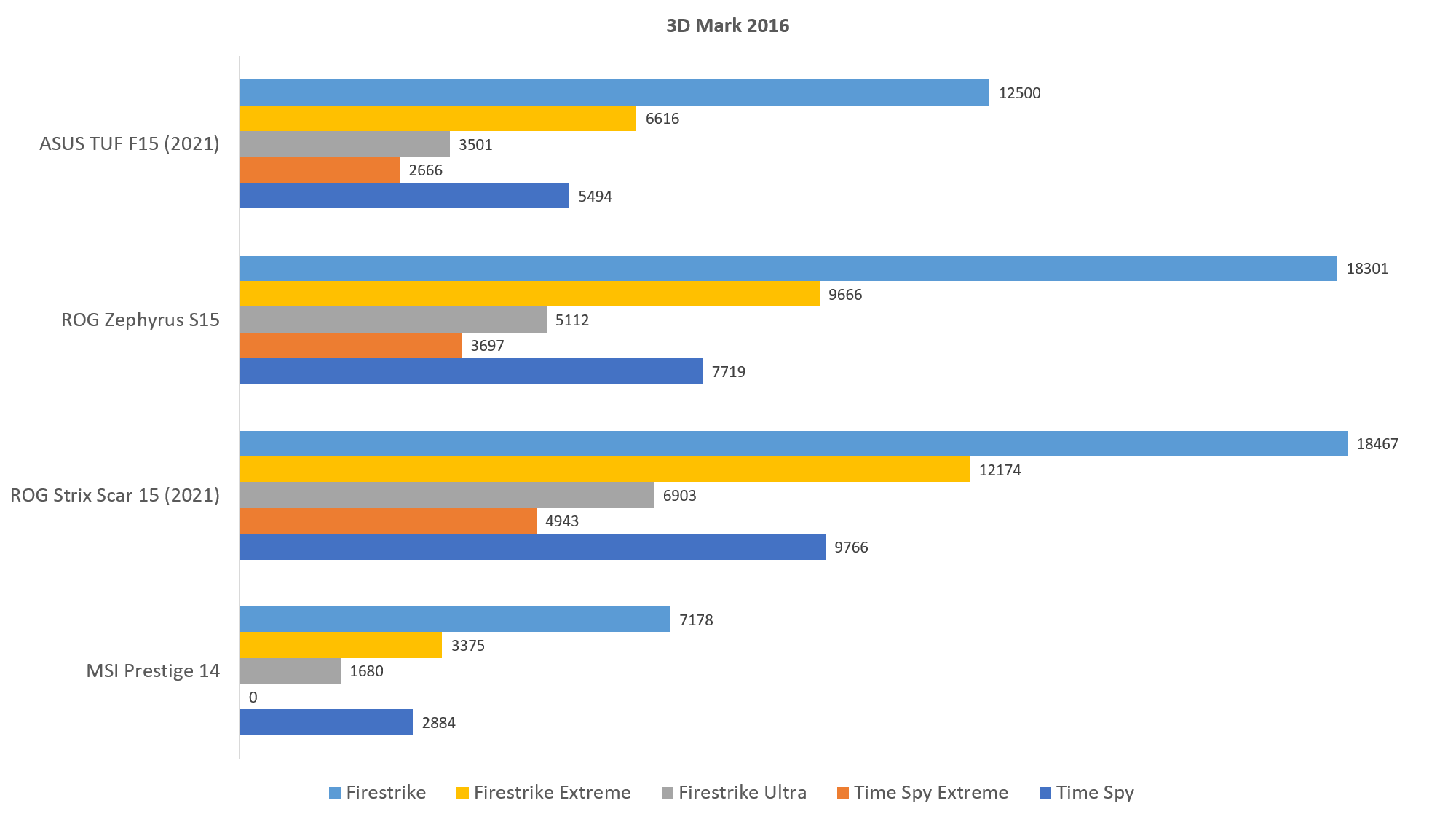 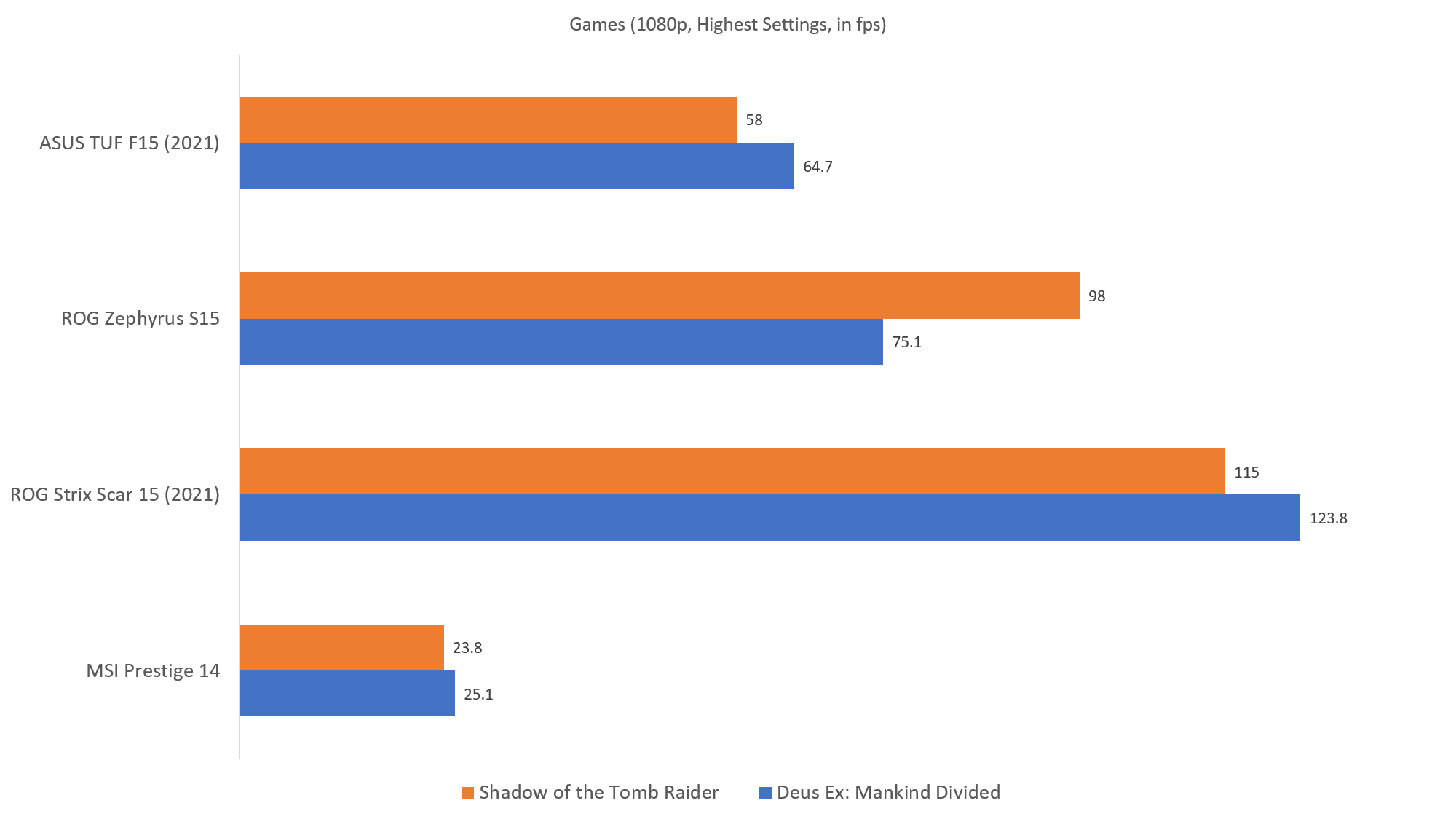 MobileMark 2018 runs a similar set of tasks as SYSMark 25, but using the notebook's battery. This helps to measure the gaming notebook performance when not connected to a power source, which is important to understand as notebook and processor optimisation differ when unplugged from the wall socket. All the notebooks were set to 100 per cent display brightness and had Wi-Fi enabled. Battery mode was also set to default, and no overclocking was done. The keyboard backlight was also left on as well. 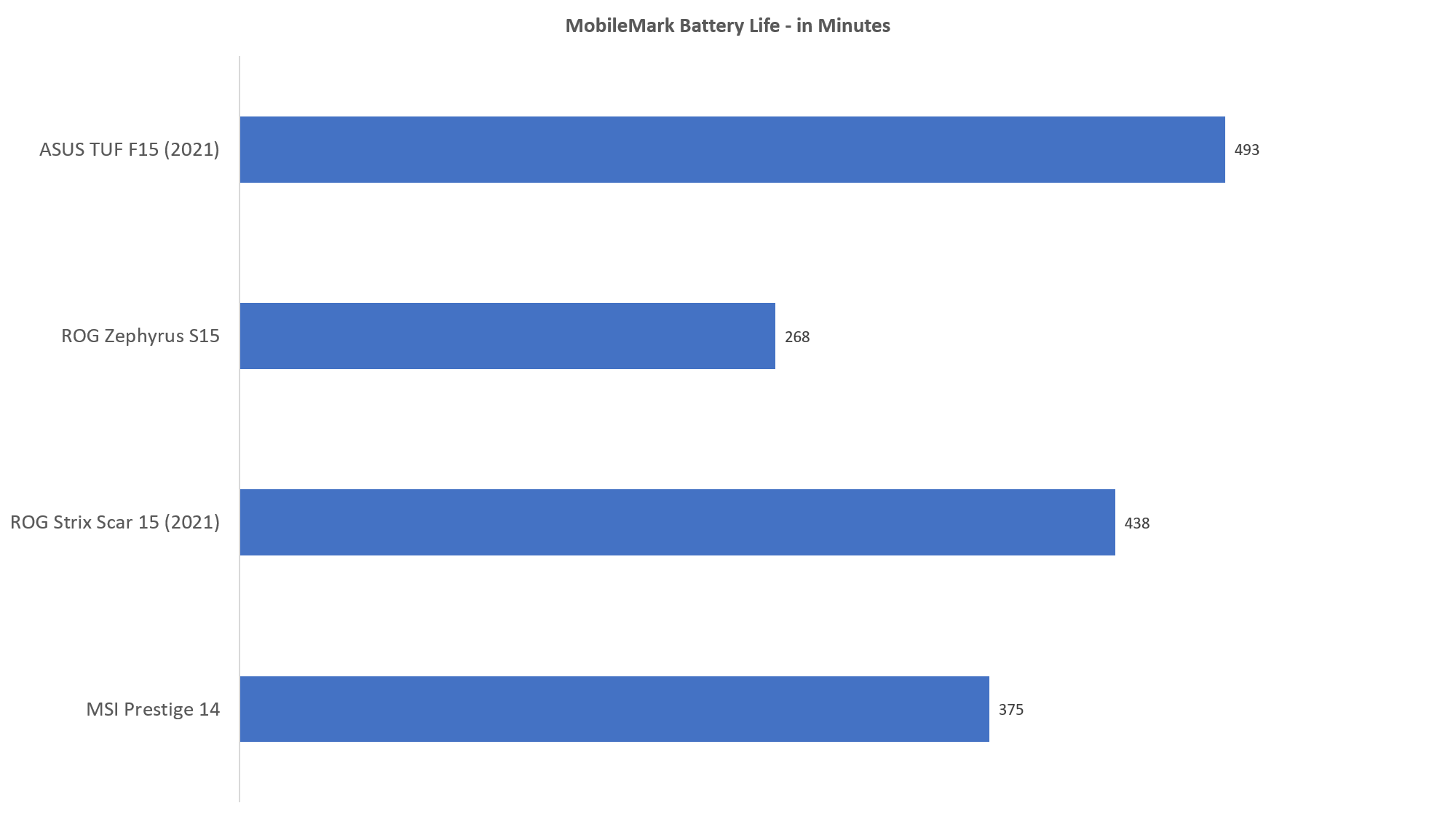 For a gaming notebook, The TUF F15 achieving more than 8 hours of battery life in MobileMark is impressive. The notebook's 76Whr battery capacity and GPU's low TGP (60W under normal load) certainly helped too. That should give you more than enough time to get productivity-related and even content creation work done while on the go. 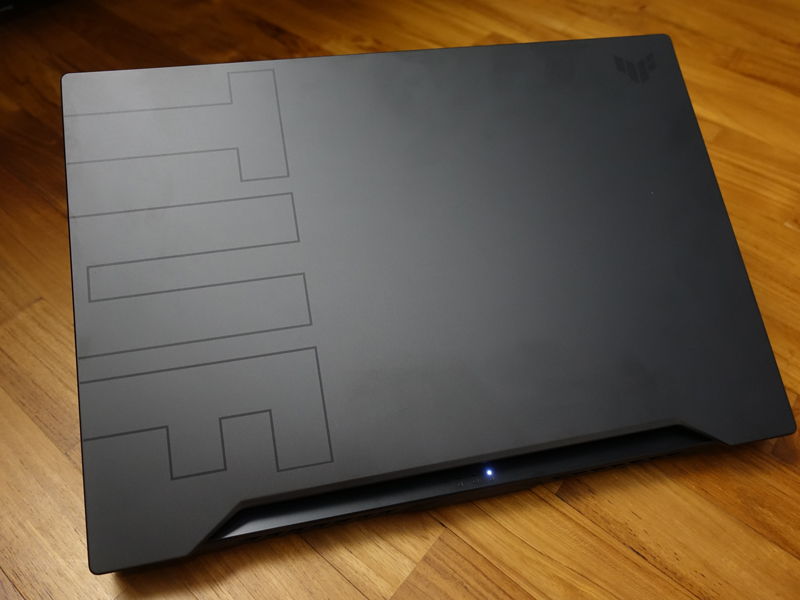 The TUF Dash F15 is an interesting offering by ASUS. Our review model comes with a price tag of S$2,198, and the aptest way for me to describe it is a high-end notebook in the budget gaming category. And I say this with a tinge of fondness because I don't think there's another competitive notebook in the market now that offers a good balance between performance and portability. The TUF F15 is easy to carry around, has an impressive battery life, decent gaming performance, great productivity performance and actually feels kind of premium too. I've never looked at the TUF series with disdain (God bless me) but I've always thought that past TUF models' designs were too unrefined for my liking. The TUF Dash F15 though, has certainly got my attention.

It's not without its weak points though. For one, the lack of a built-in webcam is a serious compromise, especially in today's widespread work-or-study-from-home practices. It's a decent gaming notebook at best, so if you're looking for high-end gaming performance then there are obviously better, and more expensive choices. But if these don't matter, then the ASUS TUF Dash F15 could make for a worthy mobile gaming companion for you.

Write a Review
Excellent battery life
Good productivity performance
Polished build
Display quality is quite possibly the best in class
No built-in webcam
Does not come bundled with one too
No option for higher-end RTX 30-Series GPU for Singapore market
Our articles may contain affiliate links. If you buy through these links, we may earn a small commission.
Sponsored Links